Japan is one of the craziest places I’ve visited, and crazy in all the right ways. I mean, where else in the world could you dress up as a Nintendo character and go-kart around the city centre in a petrol driven kart, as if you were part of a Nintendo video game yourself?

Anyone visiting Tokyo will have probably seen some Mario karts scooting around town at one point or another. Go karting has become hugely popular, there are now several different companies offering karting experiences – in both Tokyo and Osaka.

Obviously this was one of the first things we agreed to do as soon as our flights were booked. 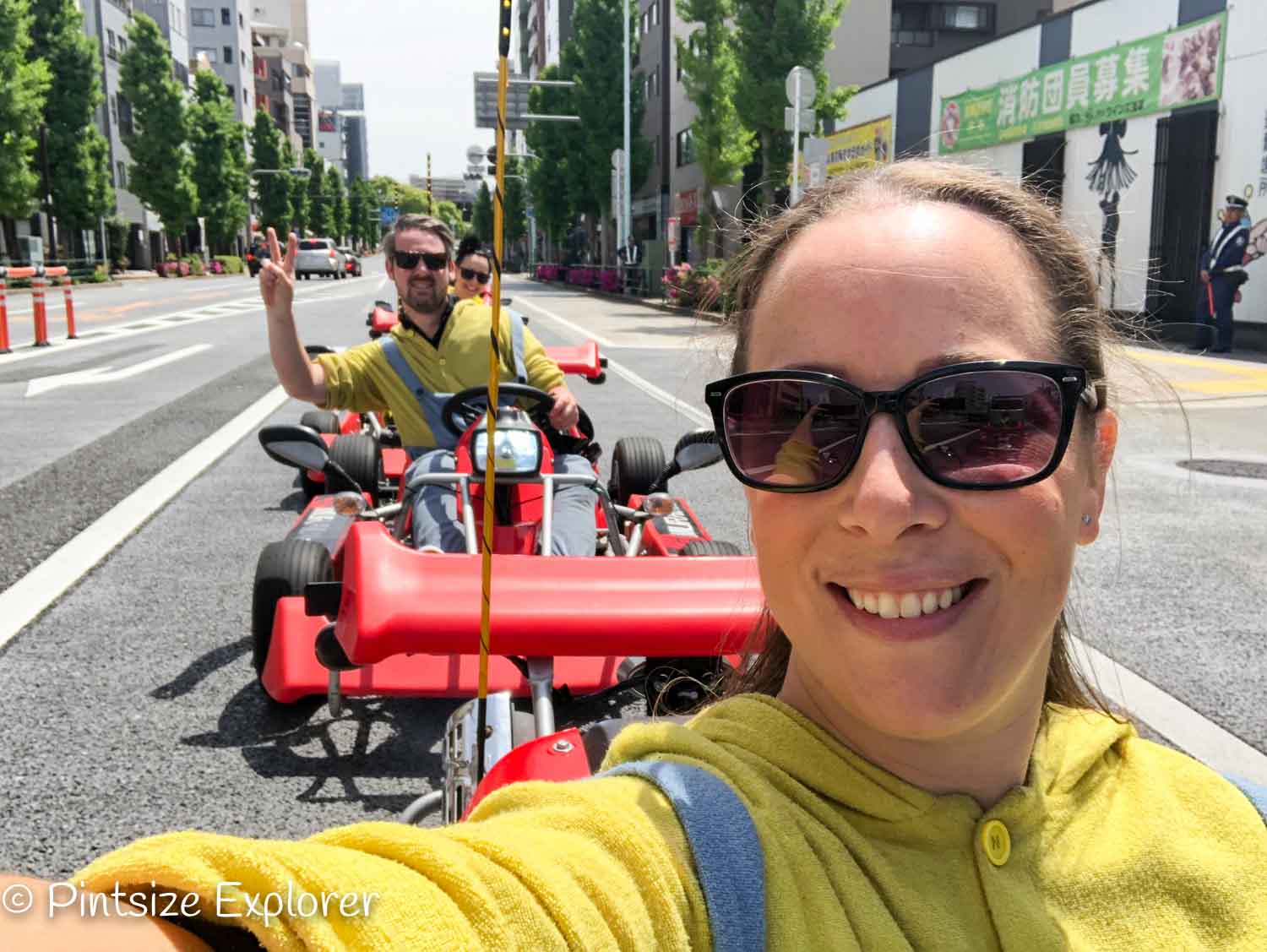 A Few Things To Note

First things first. Holding an International driver’s license is mandatory to partake in the karting. No license, no driving!

There are a few different booking options available, ranging from one, two, or three hour experiences. Depending which company you book with, there should be a choice of routes & suburbs to choose from too.

Lastly, choose from either a guided tour or a self-drive experience. I would highly recommend you stick with a guide, especially if this is the first time you are karting in Tokyo.

After some trusty online research, we booked directly with Asakusa Samuri Kart for a two hour guided tour. Alternatively, check out Viator, a global online booking service, offering discounted tickets for many bookable activities. They offer competitive prices along with a 24-hour cancellation period giving you the flexibility to change your mind along with your travel plans. 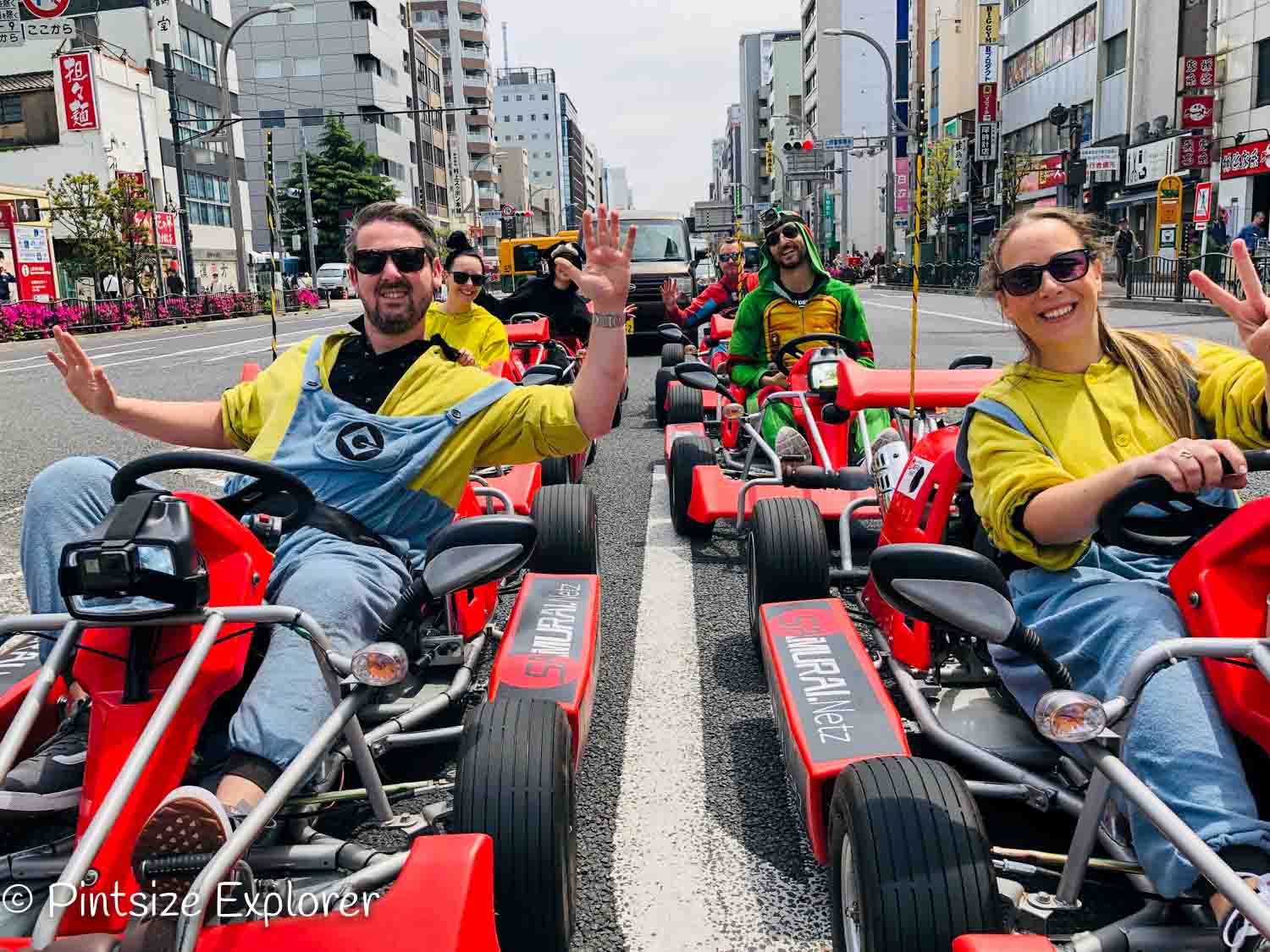 Initially I was a little worried about driving through the streets of Tokyo. As long as you follow your guide, adhere to their simple road rules, and basically don’t drive like a twat, you’ll be absolutely fine. The team at Asakusa Samuri Kart couldn’t have made the experience more enjoyable (and easy!) for us.

Assuming night time would be the busiest time to drive, and having a wobble about driving in the dark, I booked a morning driving tour instead. Having now done this myself and knowing that I felt safe at all times, I kinda wish we did this at night time. With all the high rise buildings lit up with brightly coloured neon signs, a night drive would have been really cool. Next time, for sure. 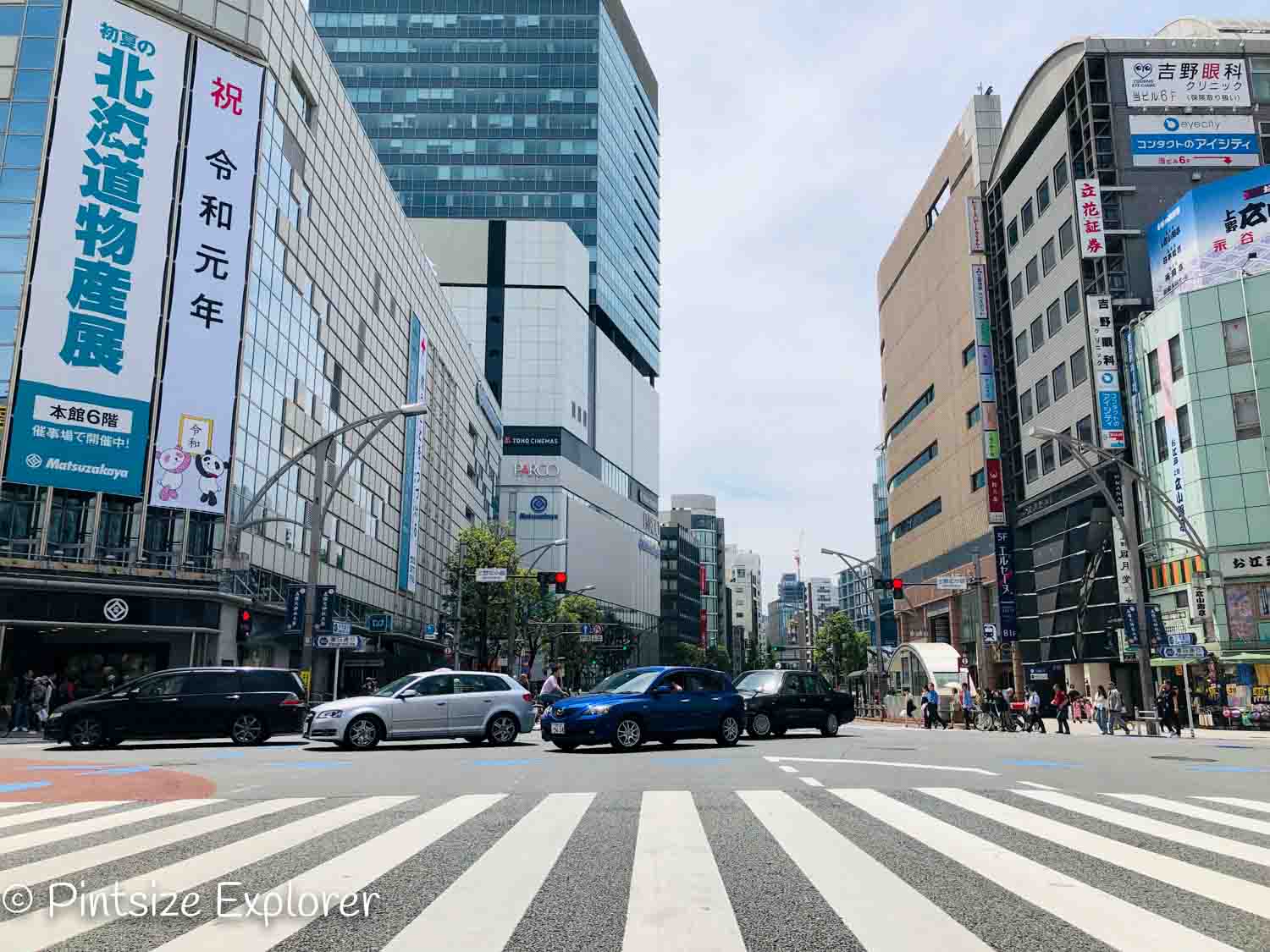 Where and How Much?

Asakusa is one of Tokyo’s many central districts. You’ll no doubt end up passing through Asakusa on a visit to the Sensō-ji temple at some point. Asakusa Station, on the Ginza subway line, is the most convenient rail connection to the rest of Tokyo. However, the suburb is easily reachable by three other train lines too – Asakusa Subway Line, Tobu Skytree Line, and Tsukuba Express line.

At the time of our visit, the cost for a two-hour guided tour was 10,000 yen per person (approx.. £75). Social media discounts were available for those willing to leave a review post the booking, reducing the price to 8,500 yen per person (approx.. £63). Payment is to be made on the day, directly with company. Refer back to Viator above if you’d prefer to book online and pay in advance. 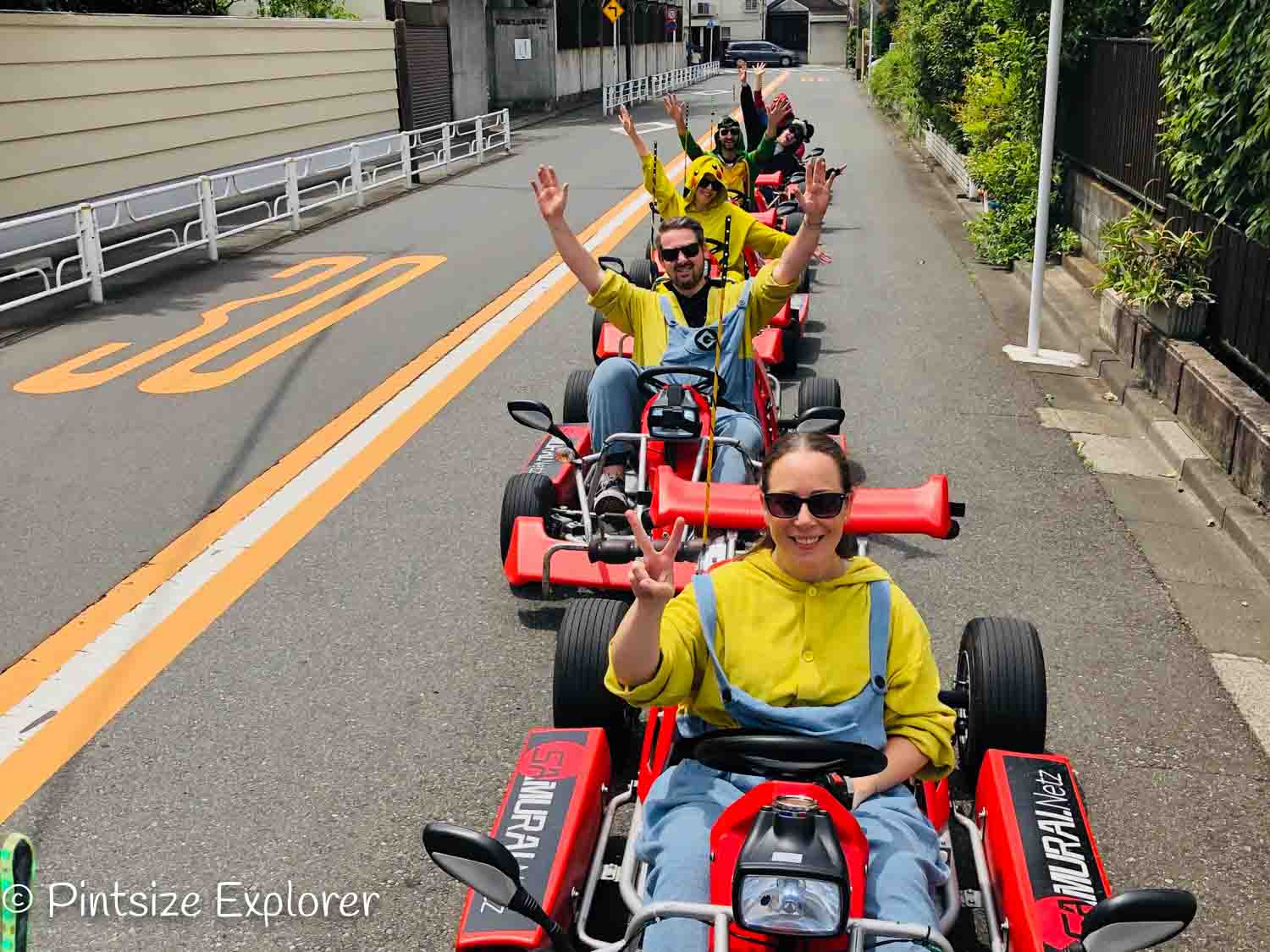 What To Expect On Arrival

Arrive 10-15 minutes early to pay up, dress up, and prep for a few hours of fun. Previously drivers were allowed to dress up as Nintendo characters, such as Mario and Luigi, of the famed Super Mario.

I was obsessed that we should dress as Mario and Luigi, and was even prepared to pay the additional fee for a stick on moustache. Unfortunately Nintendo do not want to be affiliated with the karting and the karts now have clear signage on them stating there is no affiliation with the brand.

This also comes with a ban on the karting companies providing Nintendo character dress up costumes. There was a huge choice of mostly Disney and Pixar character costumes, along with a few other random options. Instead of dressing up as Mario and Luigi, I found us two matching minions customers – meet Bob and Kevin Minion!

Side note – the majority of the costumes were fleecy, so bear in mind what you are wearing underneath! 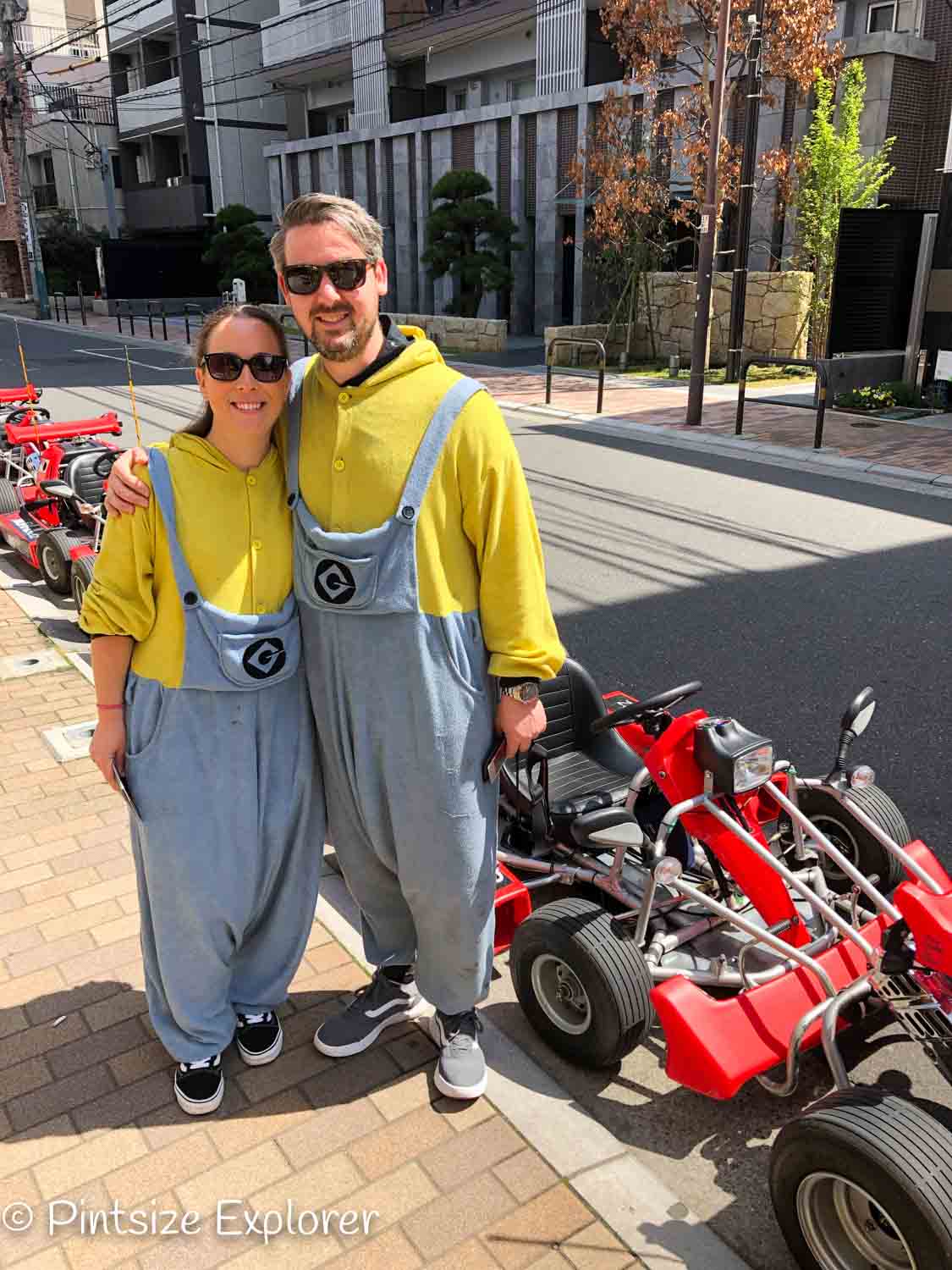 Go-pro’s are rentable, along with an additional charge for a memory card. The Samuri Kart team will help you get set up if you are new to using a Go-Pro. Each kart has a small wallet style bag attached below the driving wheel as you’ll need to keep your international drivers licence on you. There’s enough space to store a small bottle of water and your mobile phone too.

Tip: Apparently dressing as a Nintendo character is permitted, but only if the costume is purchased beforehand. I.e. not by the karting company. So, if you are desperate to dress as Mario and Luigi (or even Yoshi, Toad, or Princess Peach) then you can buy the costumes from a dress up shop and wear those instead of the free outfits the companies give you. 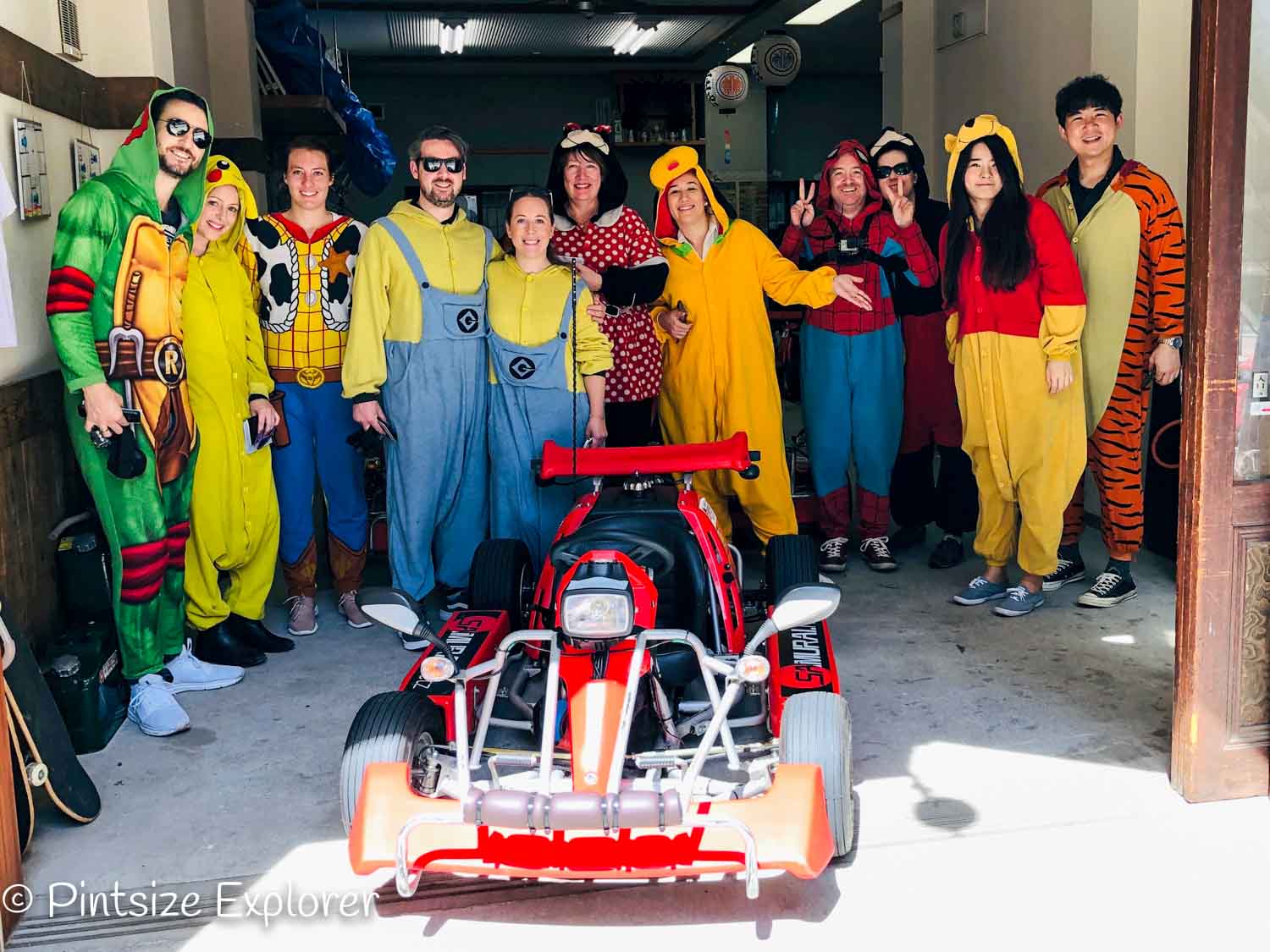 Our session included eleven adults in total. We were split into two smaller groups, each managed by a different guide. Once everyone was dressed and ready to go, we were taken down to the street and given a detailed briefing. Our guide Miya, an overly excited Japanese man with broken English, gave us an animated briefing on how to safely drive the kart. 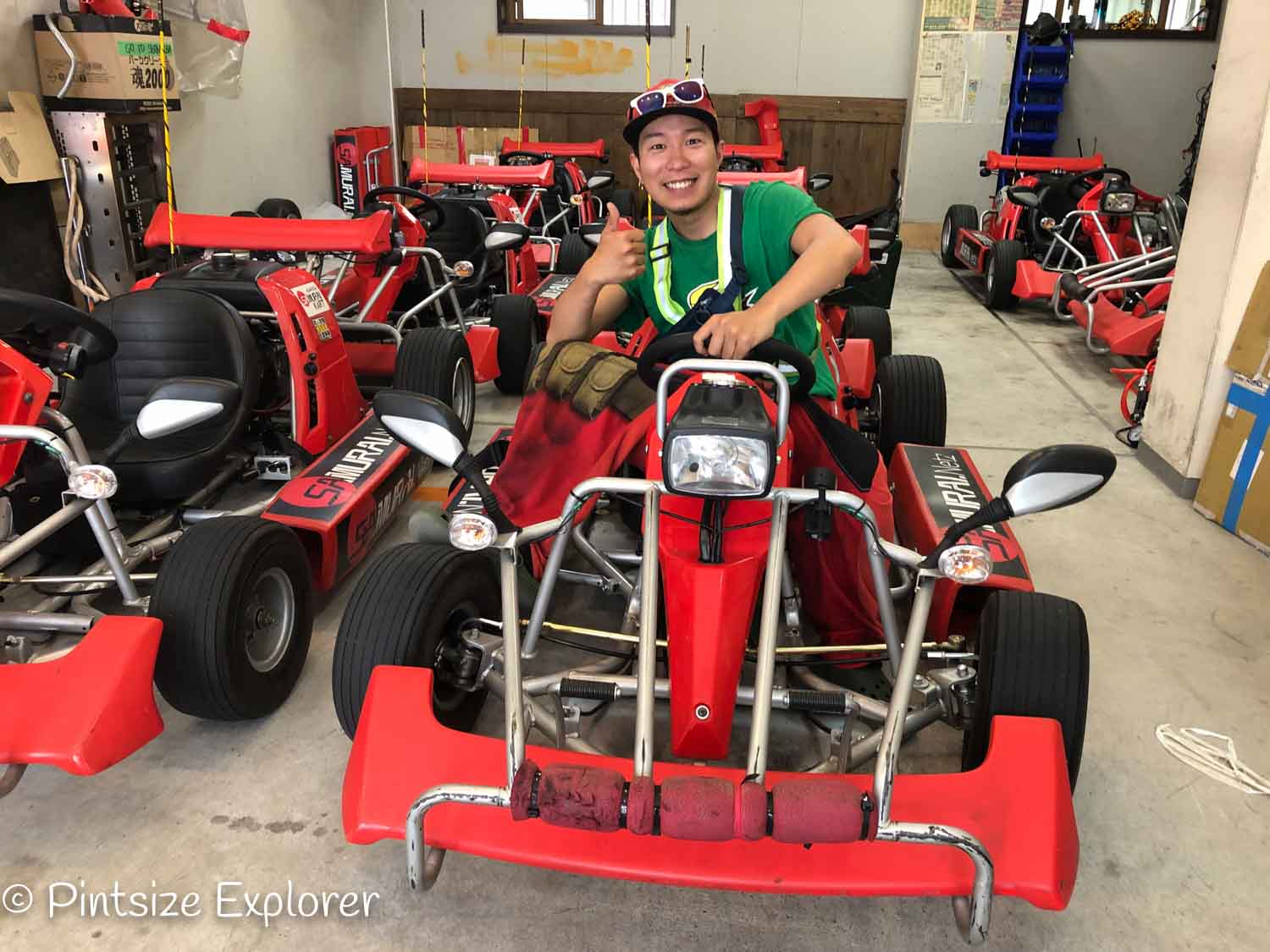 Miya informed us that he would lead the group and remain the first kart on the road. We would follow in either single file, or side by side depending on the hand signal he would make. Showing us three different hand signals, these would be the key actions we must follow to ensure we drove safely.

A magnetic board with pieces representing the karts was shown to reiterate the rules. 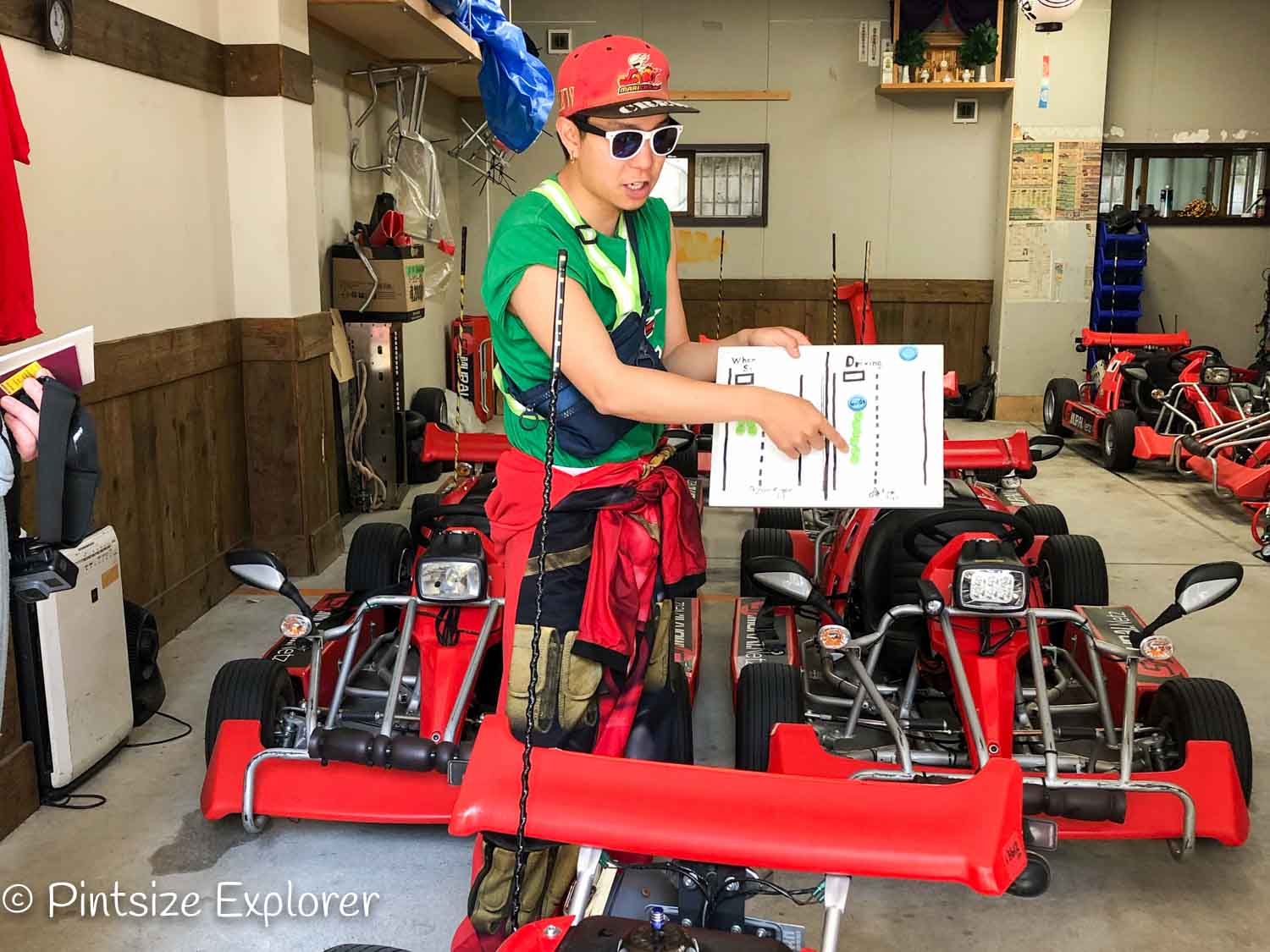 Feeling a little nervous about driving through Tokyo’s traffic, nerves soon disappeared. Regardless of driving a tiny frameless go kart, once we got going, there was nothing to worry about. The cars in the area must be so used to driving with the karts that there wasn’t a single moment where safety became an issue. If anything, I wanted to floor the accelerator and just go faster! 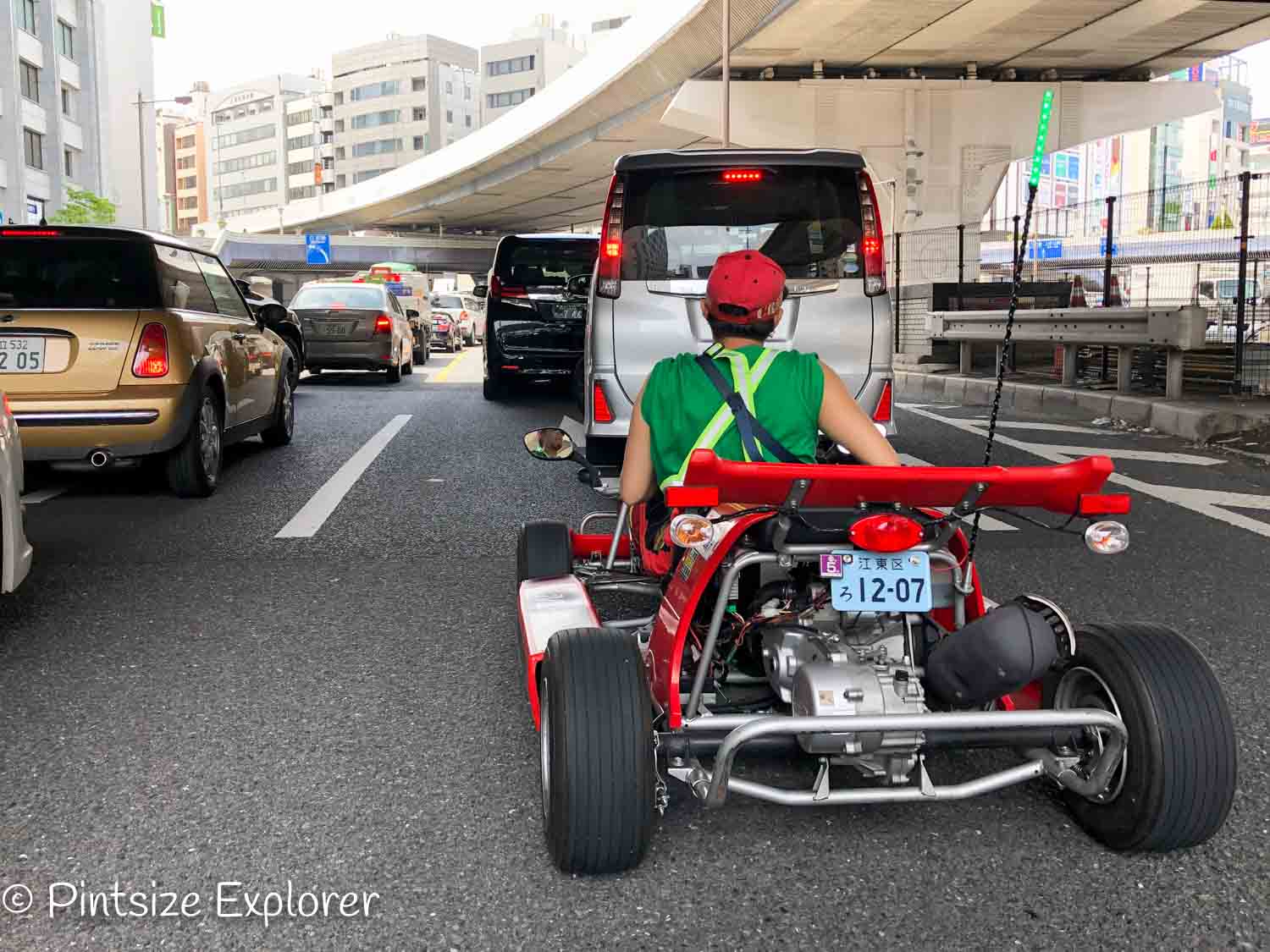 The two hour experience was split into two sections. The first hour was mostly spent on the road before driving back to the office for a short break. After a 10-minutes pit stop to stretch our legs and have a drink,  we hit the road again.

The second hour took us on a different circuit, passing some of Tokyo’s well known sites. Most notably, Tokyo’s Sky Tree tower.  The second round of driving was much more fun. Once you are more confident handling the kart and negotiating the traffic, it’s easy to relax and enjoy the experience. 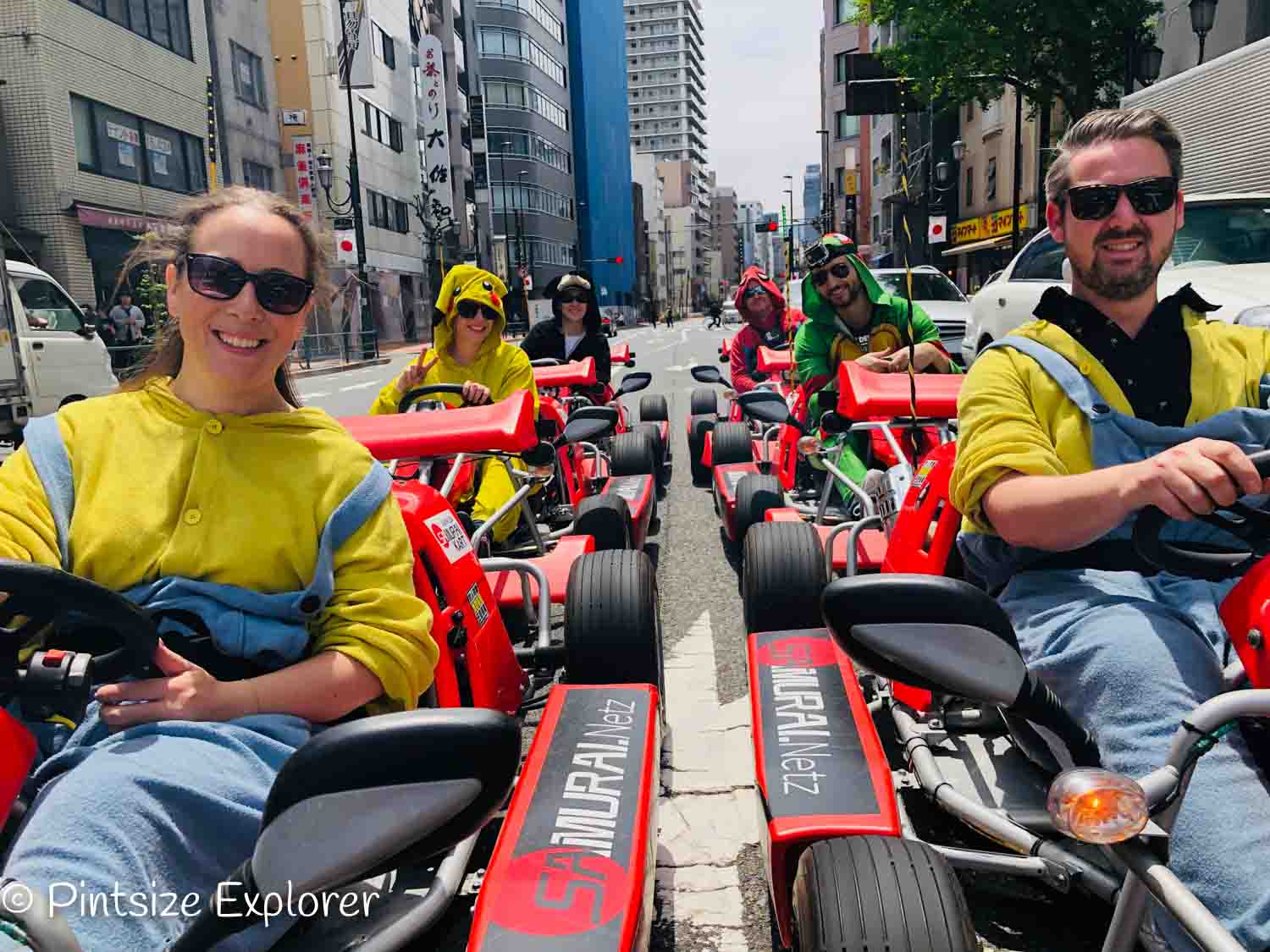 In an almost celeb like world, it was bizarre just how many people stopped to watch. Countless people stood at the side of the road pointing, waving, filming, and taking photos of us.

There will be plenty of opportunities whilst sat in traffic to take photos yourself. Whilst not ideal, Miya seemed totally fine with any photo snapping just as long as the rest of the group weren’t held up in any way.

To be honest, Miya took so many photos of the entire group including individual photos. There wasn’t really any need for us to take our own photos. As soon as we arrived back at the office he transferred all the photos (around 150 odd) to each of us via air drop on our mobile phones.

This experience was easily up there with one of the funniest things I’ve ever done. If you are in Tokyo, make sure you add this to your to-do list. Trust me, you will not be disappointed! 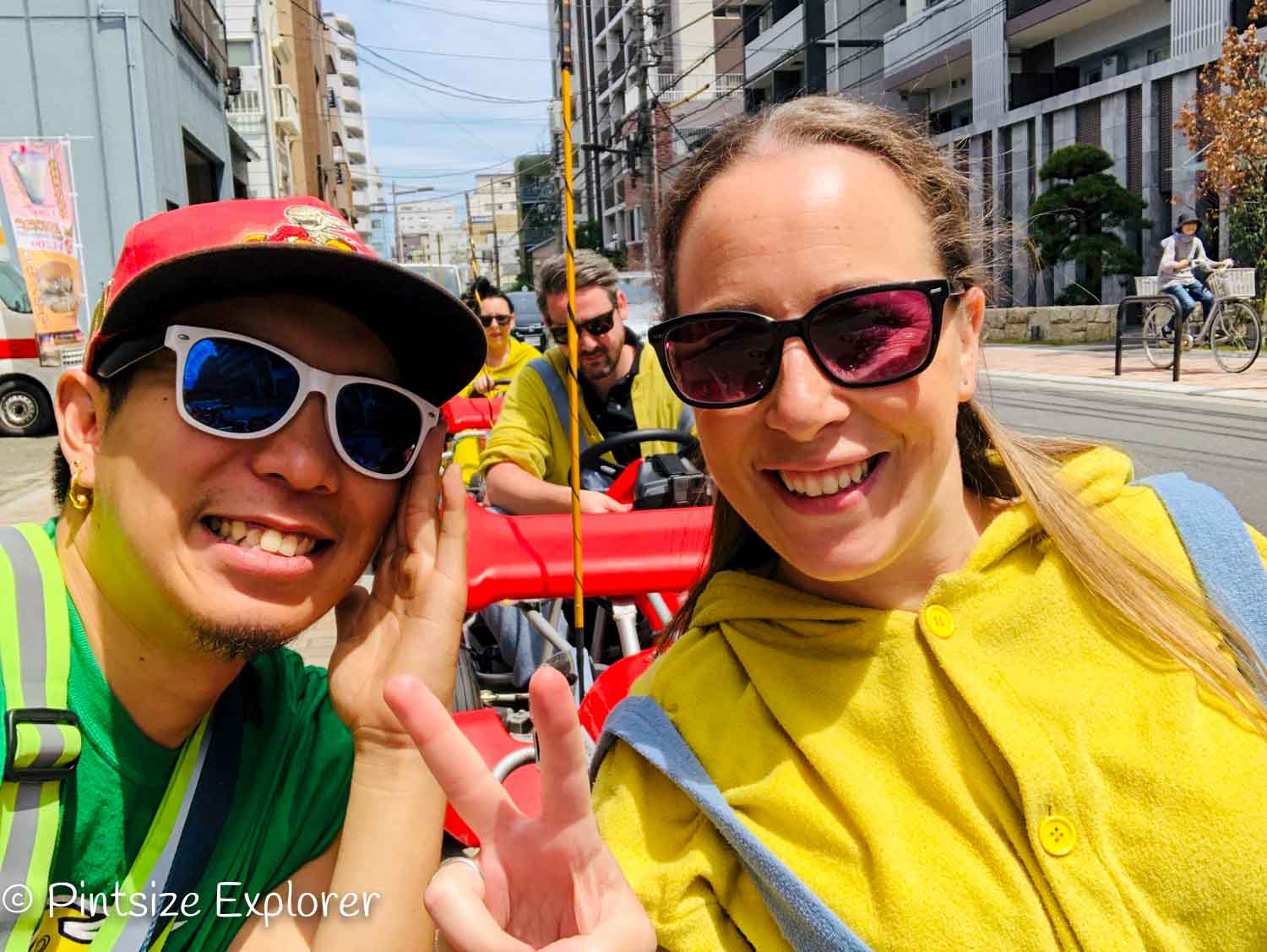 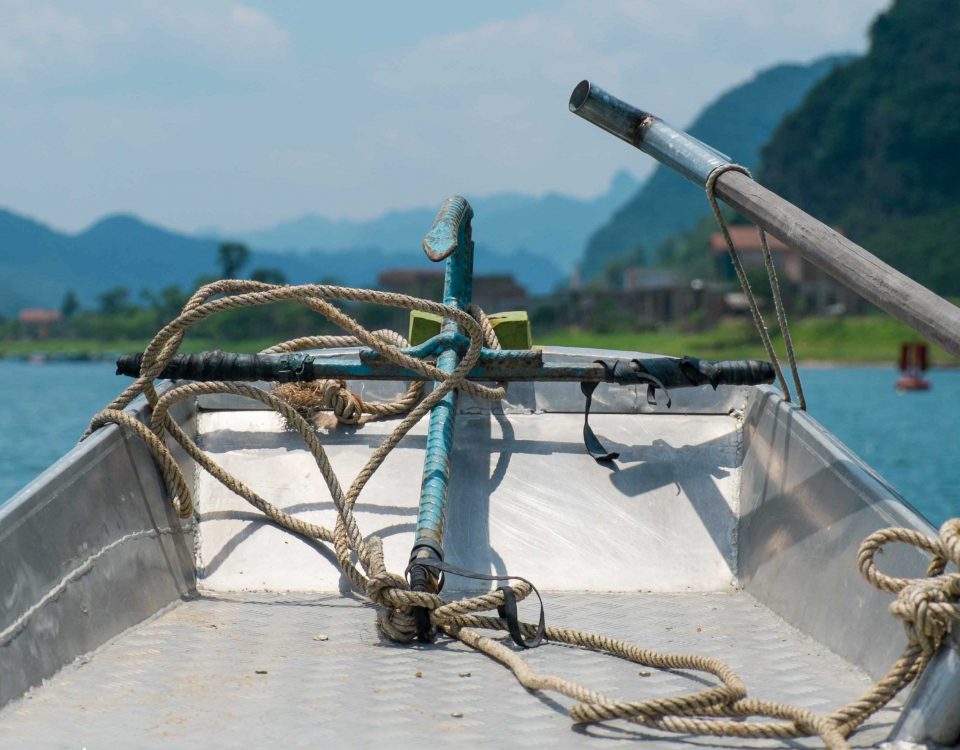