Monkeying Around In Jozani Forest

Meet The Rescue Lions of Drakenstein

Sometimes I wonder if I should change the theme of my blog from just travel related content, to travel and animal content. I have a massive passion for animals, and pretty much love them all. If you are furry and friendly looking, then I’m going to like you before I’ve even met you!

Adam and I have just come back from an epic two weeks in South Africa. We spent five days on safari, and then also visited a number of other animal sanctuaries. Despite racking up quite a chunk of hours on safari, we spotted loads of wild game, but only saw three groups of lions. The first spot was close to the entry gate of the national park, so was overcrowded with other visitors. The second spot, the lions were too far back. The last spot sucked as visitors had parked so stupidly that others couldn’t get past to see the lions.

Lions are difficult enough to spot in the wild as it is, so we figured we’d find another way to see them instead. A good friend (shout out to Global Swans) recommended we visit the Drakenstein Lion Park, which was conveniently located along our planned route. It didn’t take much discussion to agree to pay them a visit, so off we went.

A Little More Info About Drakenstein

The sanctuary solely works on rehoming both adult lions and cubs, all whom have been rescued in one way or another. They all have one sad thing in common – to have been deprived of a life as a wild animal, which as a result means they now cannot be released back into the wild. It’s impossible to integrate these beautiful, majestic animals back into the animal kingdom, when none of them hold any natural survival traits. In short, they wouldn’t stand a chance in the real world. That’s where the good folks at Drakenstein step in. They provide the lions a safe environment to live out the rest of their lives. Cue a big round of applause!!

Drakenstein opened in 1998, on a plot of land that stretches some 50 acres. The team have worked for the past 20 years to rescue lions from all over the world, providing them with a safe forever home. Currently they home approximately 30 lions, including a handful of beautiful white lions. 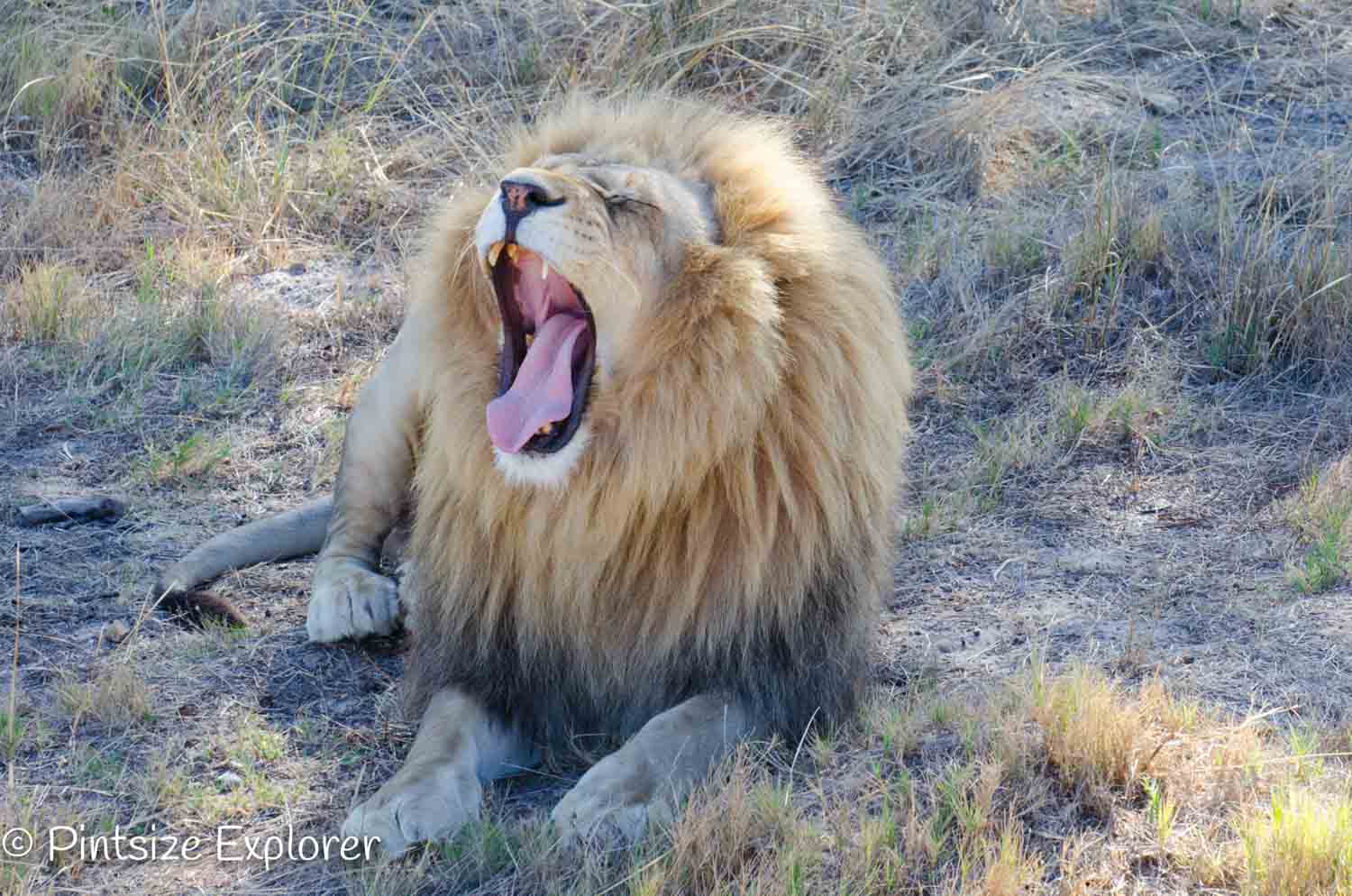 Where Have The Lion’s Been Rescued From?

Some of the lions have been rehomed from former zoos. Several of the lions were former pets – can you even imagine? I’ve grown up with extra fluffy Golden Retrievers, and that was bad enough, but a lion as a pet!?! Kept in small confined spaces, underfed, and then abandoned once they began to grow from a small kitty cat, to a much larger cat! As for the rest of the lions, they all share comparable rescue stories, coming from a similar backgrounds of animal abuse, circus’s, or illegal trades.

To rehome the lions is not an easy job. Thanks to some fantastic animal welfare trusts, and animal travel services, the lions have been transported from all over the world. Without those companies (who provide their services for free), I’m pretty sure there wouldn’t be half as many lions on site as there are now. 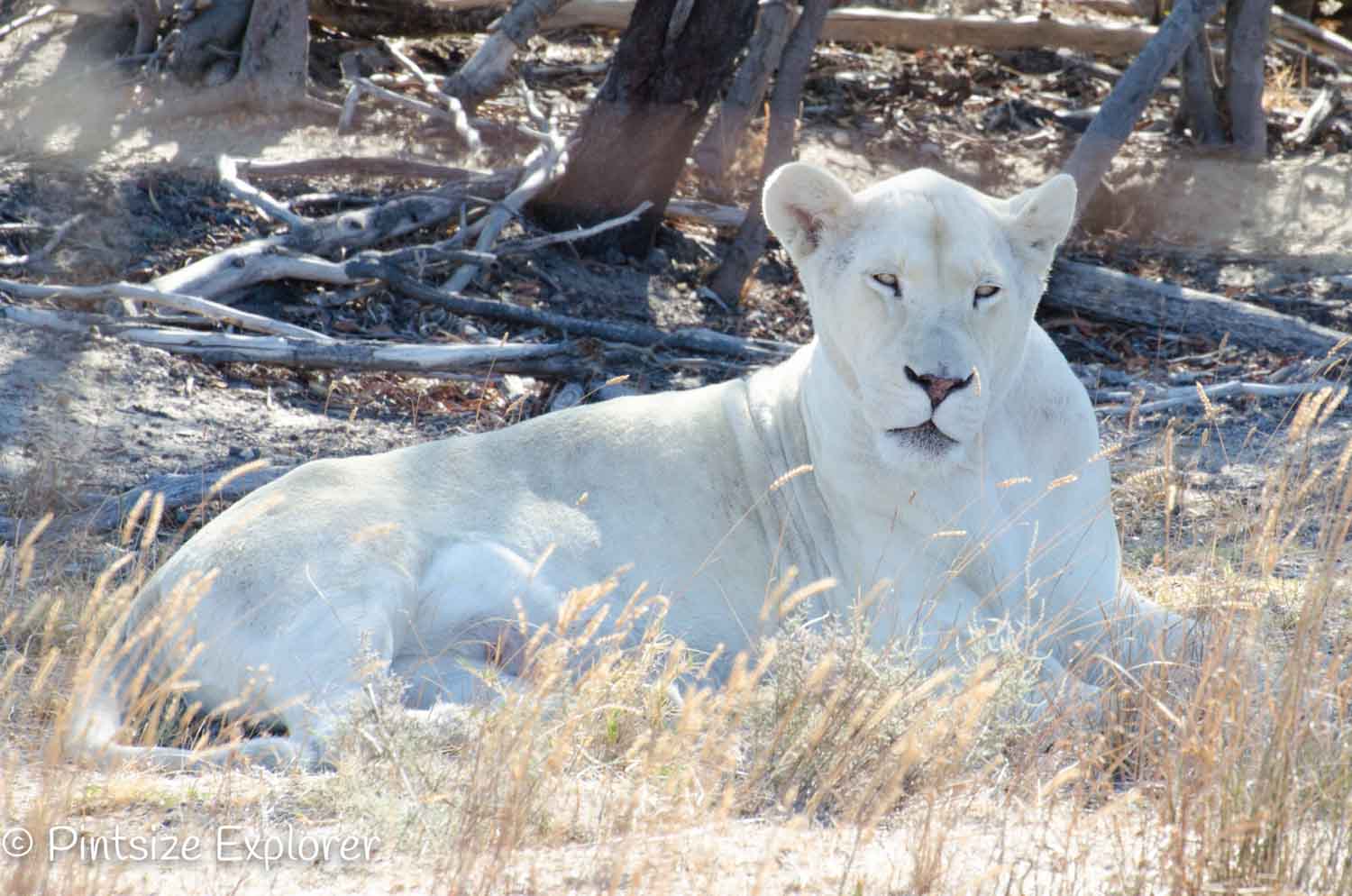 With just a few small road signs, it’s easy to miss the turn off for Drakenstein, so get your google maps out and keep your eyes peeled! We did exactly this and missed the entrance, so had to turn back on ourselves. D’oh!

Tickets can be purchased from the main entrance, which is nothing more than a single ticket counter. At the time of our visit, tickets cost 70 rand per adult (£4.15). For an additional 30 rand (£1.70), you could purchase a dual entry ticket that allows you access to the sister sanctuary, Chimp Haven. I’ll explain more about that below! 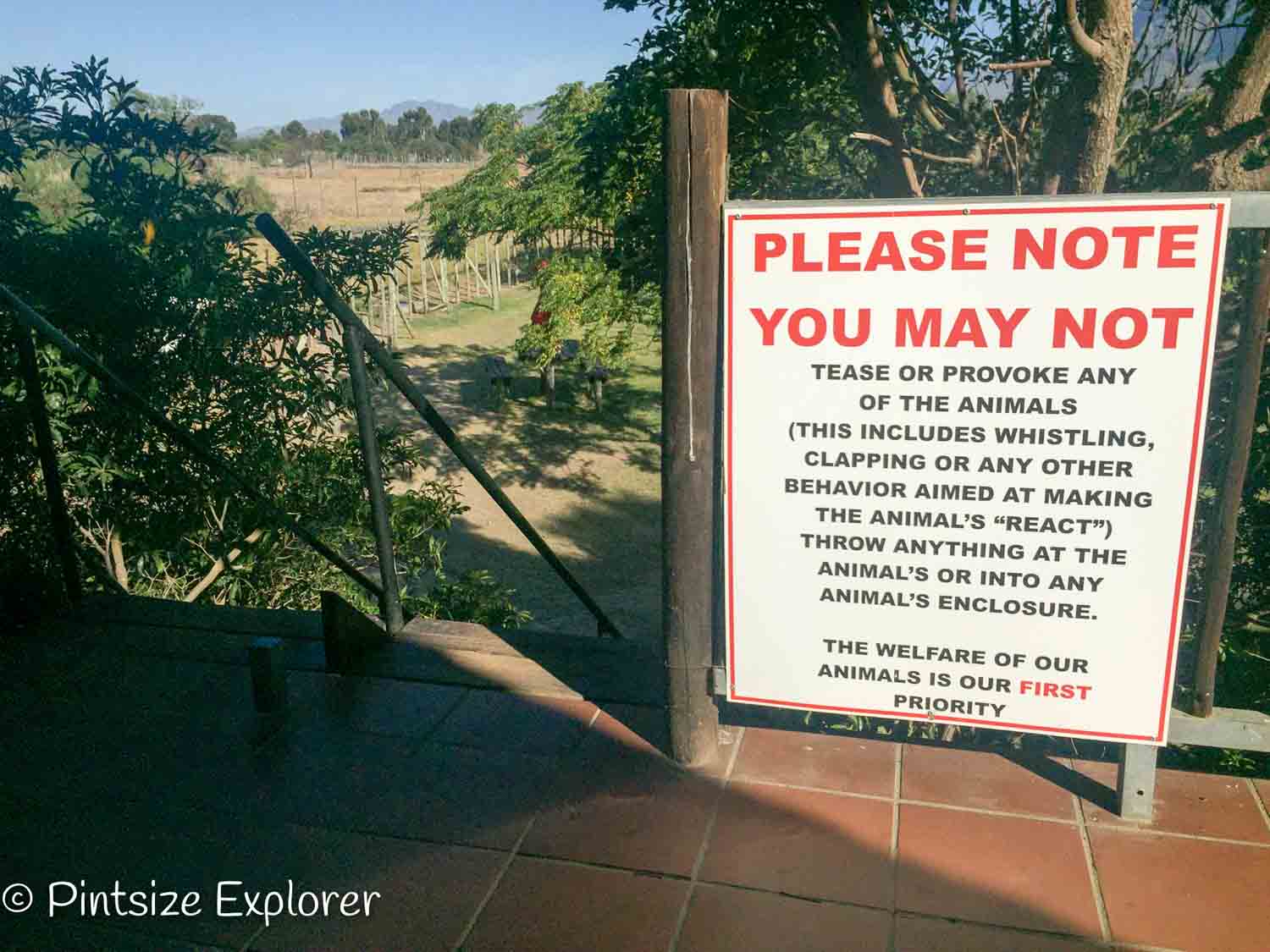 The grounds of the sanctuary are fairly basic. The main entrance includes a gift shop, a small pizza café, and you can also purchase drinks and ice creams too. Best to check the café’s opening times though, as this wasn’t open all day, every day.

As you walk into the sanctuary, you’ll find each of the lions in their own enclosure, with the exception of a few who are paired up. These guys would either be related, or would have been rescued together, so therefore have been kept together too. The enclosures were pretty large. To the extent that we couldn’t see every lion in their own space. 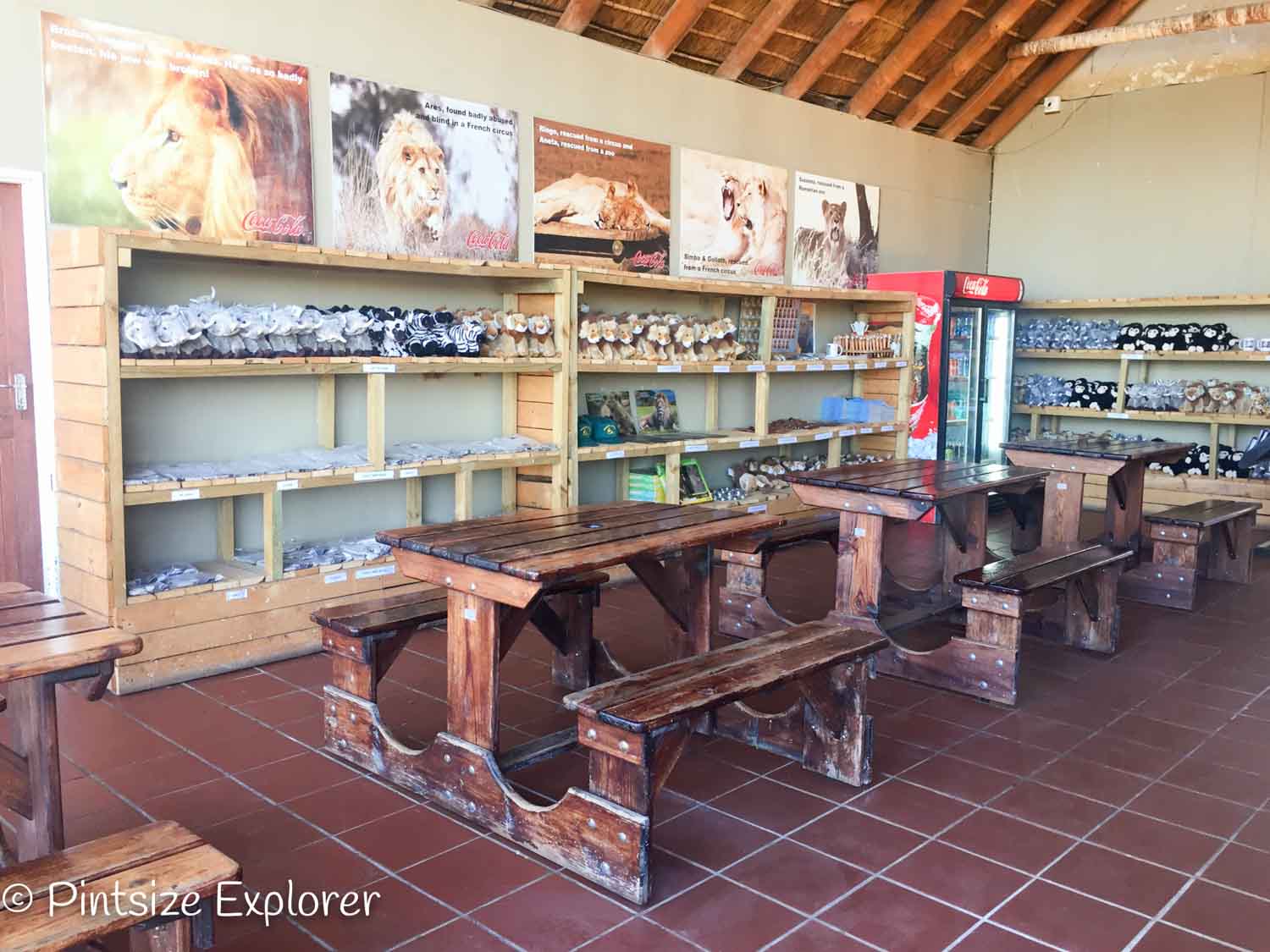 The first section of enclosures has a walkway between them, each with a double fence to prevent anyone sticking their hands inside. No-one is permitted inside, not even the workers. They feed the animals from the external fence by throwing the meat over both fences.

The back section of the sanctuary is far more open, with a wide pathway between the other enclosures. At the very rear, a former tiger enclosure sits empty. We were told they wouldn’t be replacing the tigers, so I believe that might get converted back into another lion pen at some point.

There are a few helpful viewing platforms that allow you to see over the fences, and further back into the enclosures. Don’t forget to look up at the epic mountain view in background too. What a stunning backdrop huh!! 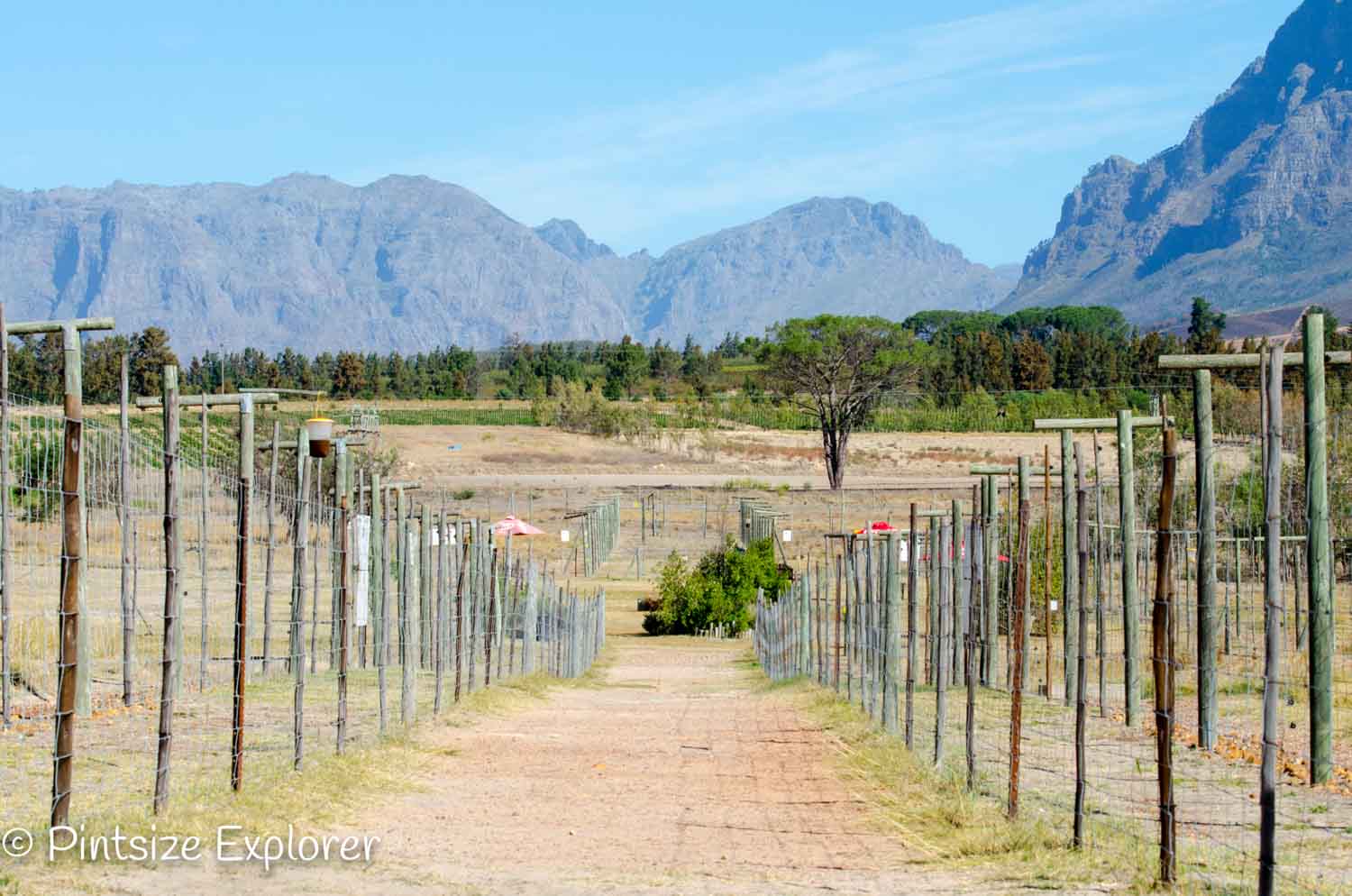 Want To Cuddle A Cub?

You’ve come to the wrong place if this is what you want to do. Drakenstein are BIG on not allowing human and animal interaction. This is something many other sanctuaries permit, and is a massive reason why the animals cannot be released into the wild. The more they are ‘humanised’ the more they lose their natural survival instincts.

I’ve read about a few other places that are desperately trying to stop these experiences, but sadly there is such a huge demand for this by tourism. The Lion & Safari Park are a perfect example. They share a press release on their website to explain that their business, their jobs, and a huge R100 million investment are all at risk. Why? Because suddenly no-one is interested in visiting, despite their new world class facilities they’ve just built. It’s a twisted world, but kudos to Drakenstein for sticking by their guns!! 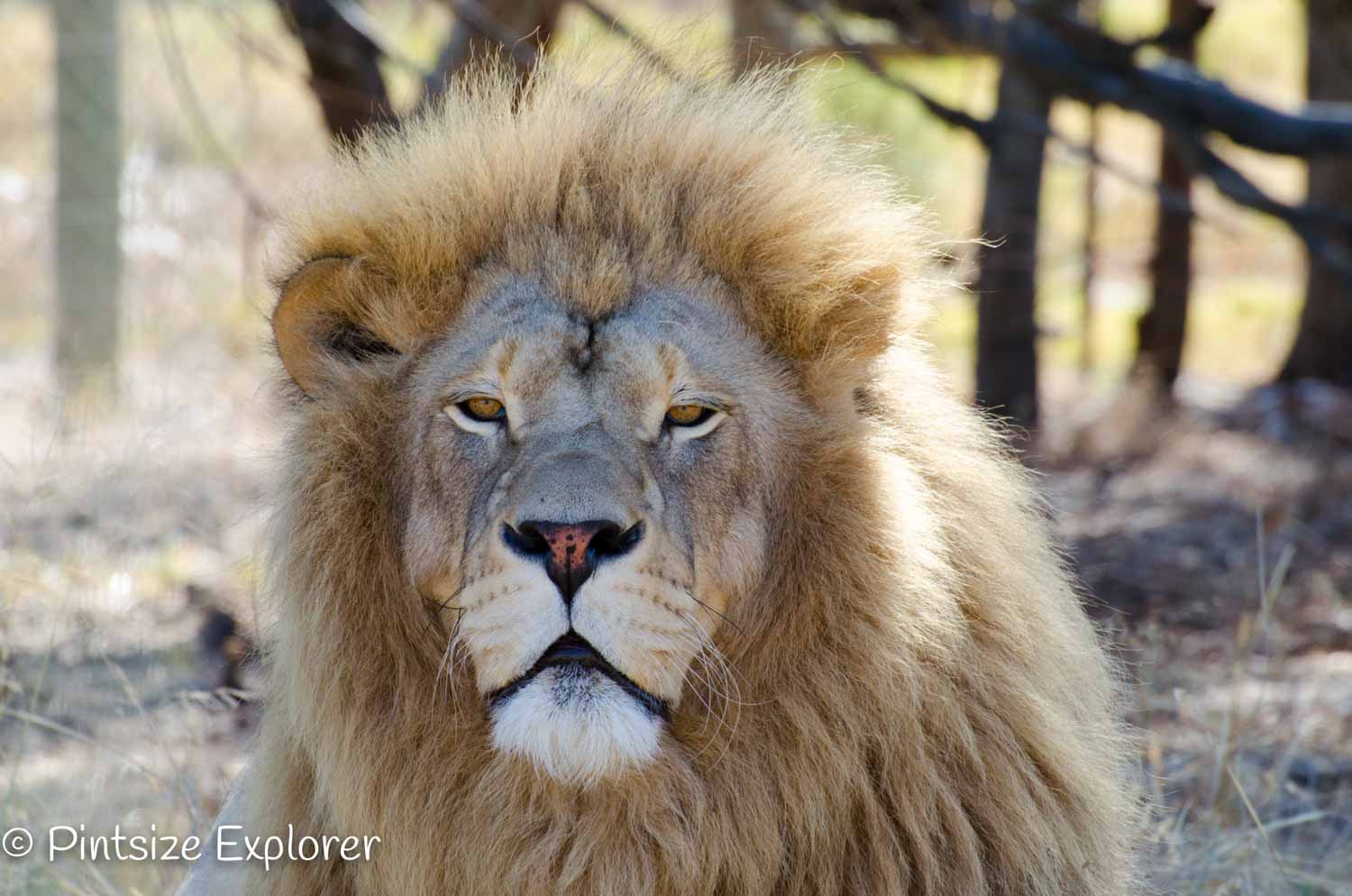 Whilst I absolutely 100% support Drakenstein and love what they have done here, my only suggestions would be to possibly offer a guided tour. Whilst each of the enclosures had a display board with the individual lion’s picture, name, and rescue information – that was kinda it. I would have definitely paid extra to have joined a short informative tour!

Perhaps we timed it well by arriving right at the end of the day, but as we were walking around, the general manager came over to us to chat. She walked us round the entire site, calling out to a handful of the sleepy lions to get their attention for us. Most importantly, we spent our time with her discussing in depth how the animals are rescued, and where they have come from. 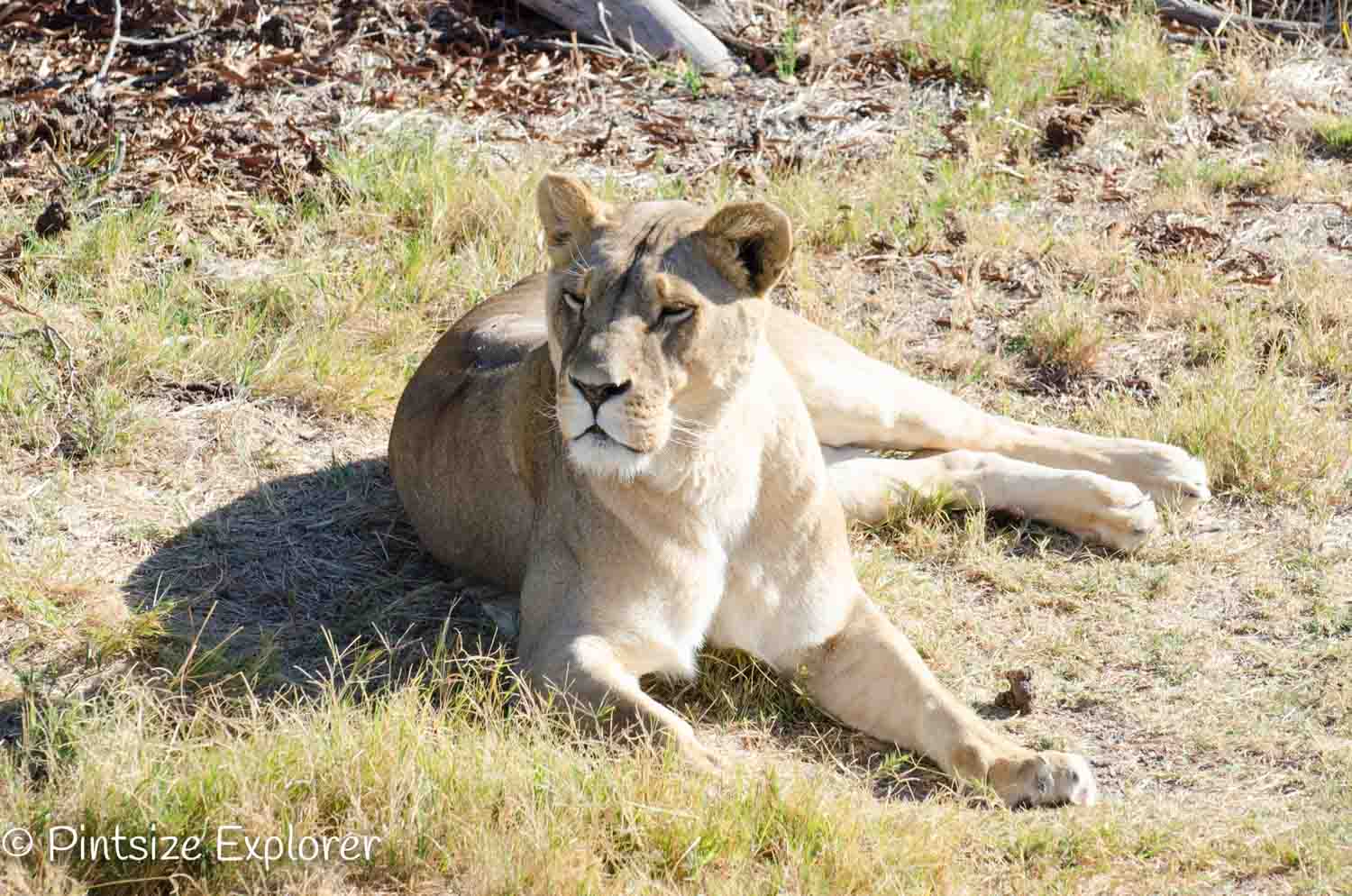 How Can You Help?

Definitely pop by if you are in the Cape Town or Franscheok area. Alternatively, you could adopt one of the lion’s, or make a donation. Volunteering is also available too! My favourite lion was Tony, and I plan to adopt him for the year. *Remind me to add that to my to-do list!

For R1,000 (£60), you could support the sanctuary by adopting one of the lions for a year. Your name will be added to their display board in the sanctuary, and your money will help contribute to their upkeep and welfare! Lifetime sponsorship plans have also been devised for those feeling super generous. Prices will vary depending on the age of the lion you adopt, as costs are based on their life expectancy. 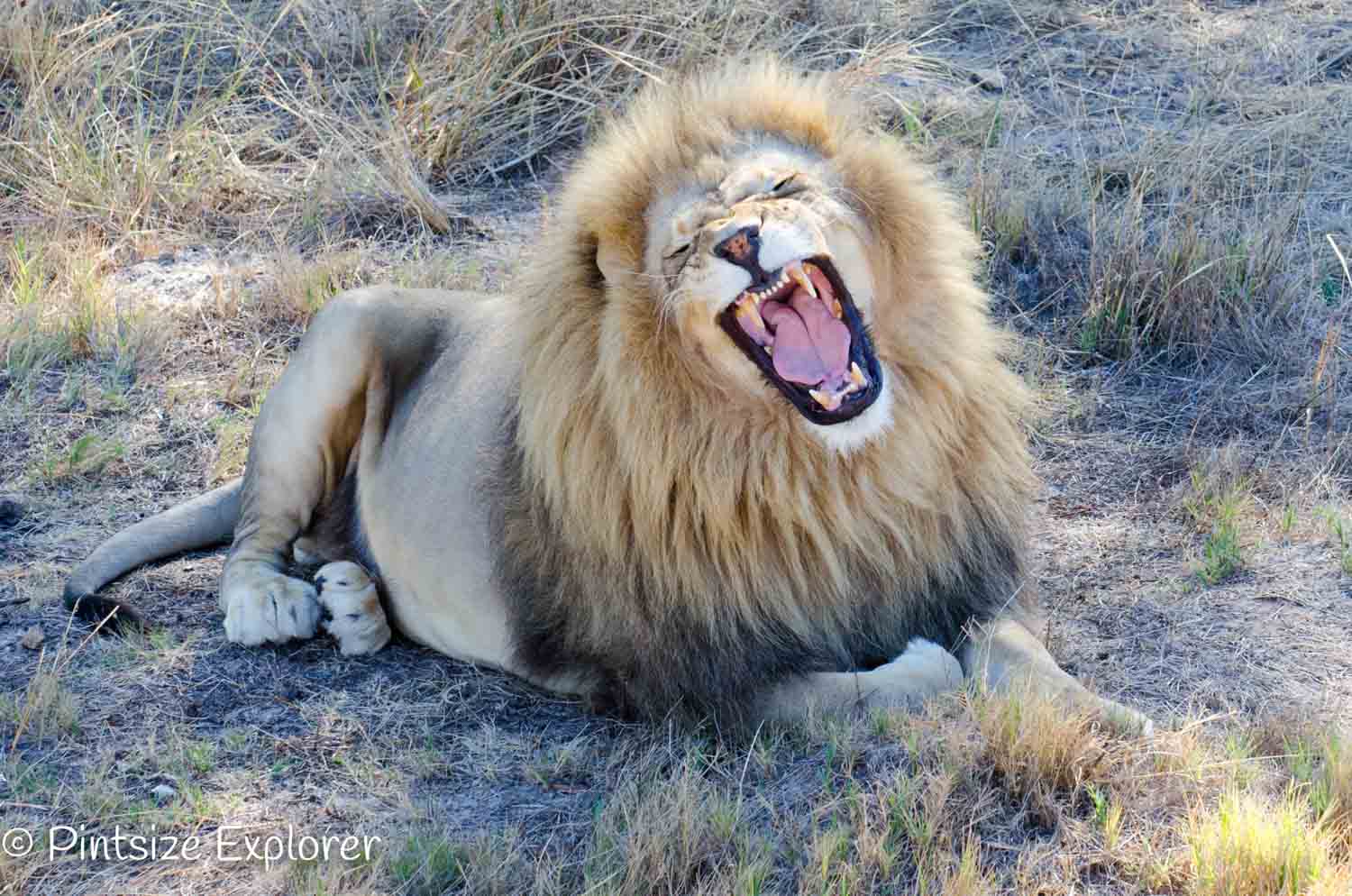 The sister site of Drakenstein is Chimp Haven. Located right next door, a combo ticket for both sites can be purchased for an additional R30. Similar to the lion sanctuary, Chimp Haven has been created as a rescue home for chimps.

Unfortunately, we were quite disappointed with the Chimp Haven. There were only 6 chimps on site, and we were only able to properly see one of them. Saying this, it was super hot, so I expect the chimps were hiding out in the shade trying to cool down.

There wasn’t an awful lot going on in here. Two small monkey enclosures, again, neither with much visibility of the animals. There were a few other animals there too.

I would definitely recommend visiting, especially as it’s so cheap. I do however realise that we were unusually lucky to have had the opportunity to chat and walk around the site with their lovely general manager. This made a massive difference for us! If it wasn’t for her, then perhaps I wouldn’t have enjoyed it as much – but’s that just pointing out the obvious!

Everyone who visits Cape Town will no doubt head out to Franschoek or Stellenbosch, so tie in a visit at the same time! Oh, and don’t forget to say hi to Tony for me! 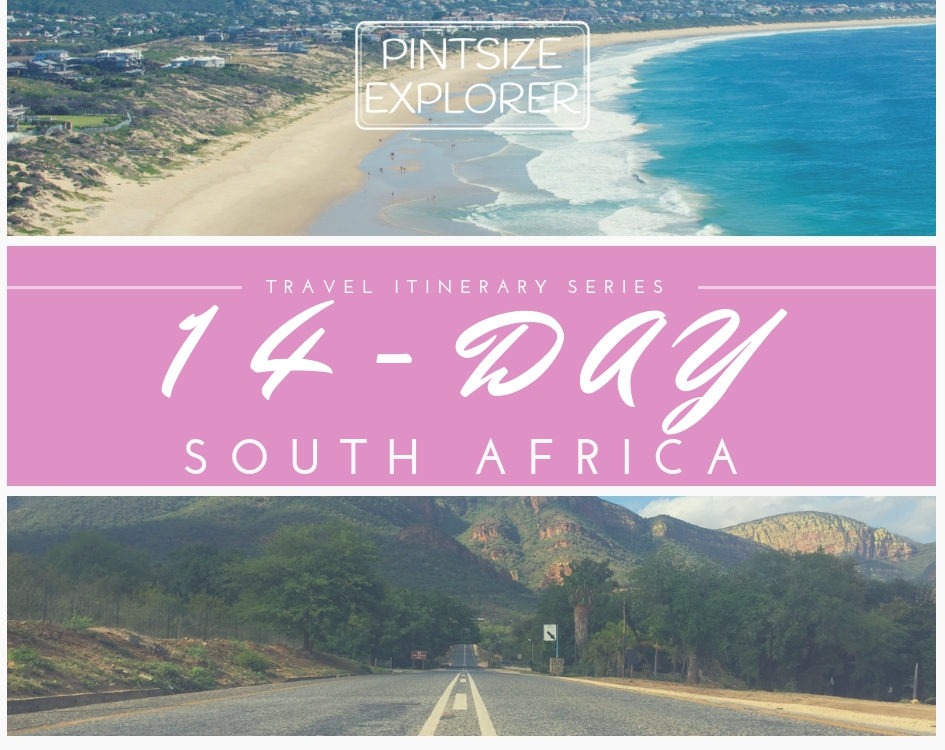