A few months ago Adam and I visited Wales for a long weekend of fun. We hiked Mount Snowden, and we zipped across the Welsh caverns on a zipline. To complete our action-packed weekend in Wales, we also headed over to Zip Worlds latest activity – The Fforest Coaster – to see what this new ride was all about! After a bit of a kerfuffle in trying to locate the site (don’t follow the sat nav as the GPS location isn’t correct!), we made it just in time to join in the fun.

The Fforest Coaster is designed with the traditional toboggan in mind – think of the film Cool Running’s – but on rails! Each rider sits in their own sledge and has full control of their own speed, as they weave and zip through the forest. The track runs for 710 meters, and is the only alpine coaster of its kind in the UK. 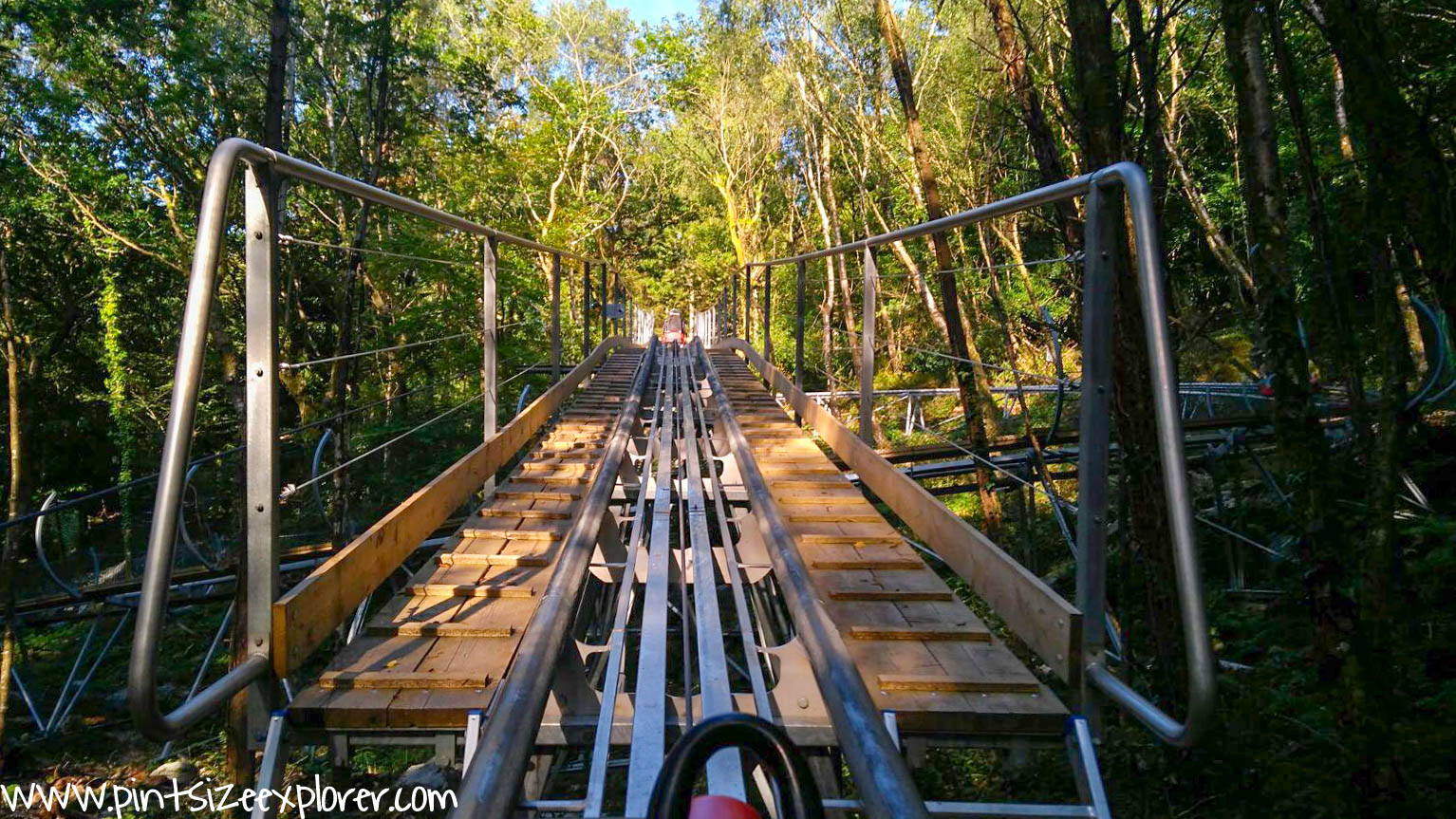 We registered in the reception hut and were sent up to the start of the track. We were met by a friendly guy who marked our wristbands to note this was our first ride. Once in line with everyone else the queue didn’t take long as one by one each person boarded one of the red sledges. The sledges were pretty simple. Each had a seat belt which auto locked as soon as the ride began, so there’s no getting out! They also had two brake levers, one either side of the cart for the rider to use as and when they wished.

Once strapped in, our sledges scooted along the rails and then climbed their way to the top of the track on a motorised pulley system. The climb was at a steady pace through some incredibly beautiful surroundings. Huge tall forest trees lined the track as we slowly crept higher and higher. To the left of the track we caught a glimpse of other riders as we heard them zooming past on their way down. 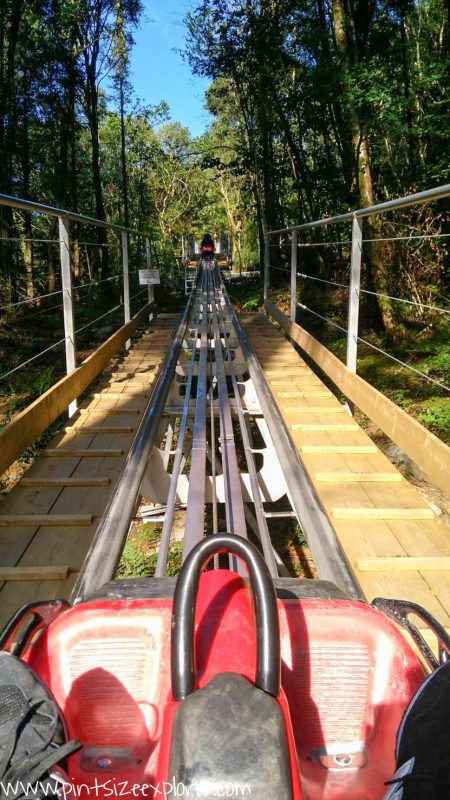 As we reach the top of the track we were finally ready to go! Initially I just sat there thinking my sledge would be jerked forward to set me off, but the guy behind me shouted for me to release the brakes to get me going. I gently eased off the brakes and began to creep forward. I wasn’t quite sure what to expect or how fast I’d go, so my first run down was a little slow as I was unnecessarily heavy handed on the brake levers. In fact, at the bottom of the run the guy behind me joked that his 5-year-old son had asked him why I was going so slow – jeeez! I was totally wiped out by a 5-year-old!!

On my second run I was feeling a little braver and eased off the brakes allowing me to pick up a lot more speed. The best part of this coaster is that you can 100% control your own speed, so speed junkies can fly down at full throttle, and those who are a little less adventurous can ride down at their own pace. The track zig zagged through the forest trees with some parts as close as 1.5 meters.

Two runs down and one to go! This was it – I was feeling much more confident this time. Back up on the lift and a few minutes later I was at the top, ready to launch my way back down the track as fast as I could. With a top speed of 25mph (40kph), the coaster does go pretty fast as you nip and wind your way back down.

I really enjoyed this and would absolutely recommend it to anyone else passing by! There were loads of other activities on the same site, although they mostly looked appealing to younger kids and teenagers, rather than adults. Check out the Zip World website to see what other activities you can take part in.

Want to see what the coaster was actually like? Scroll on down and you can watch some footage from our alpine coaster rides!

Watch A Short Video Of Our Fforest Coaster Experience!

The Fforest Coaster is located at the same Zip World Fforest location as a number of their other activities, including the Zip Safari, Junior Tree Toppers, Skyride and Treetop Nets. The forest site is a short 5-minute drive from the Betws-y-Coed train station, alternatively you can walk as we did and follow a picturesque path over a suspension bridge that winds through an open field to connect onto the A700.

Note: If walking then pay no attention to Google maps who suggest this is a 13-minute walk, but it was more like 45 minutes due to the wrong GPS location. 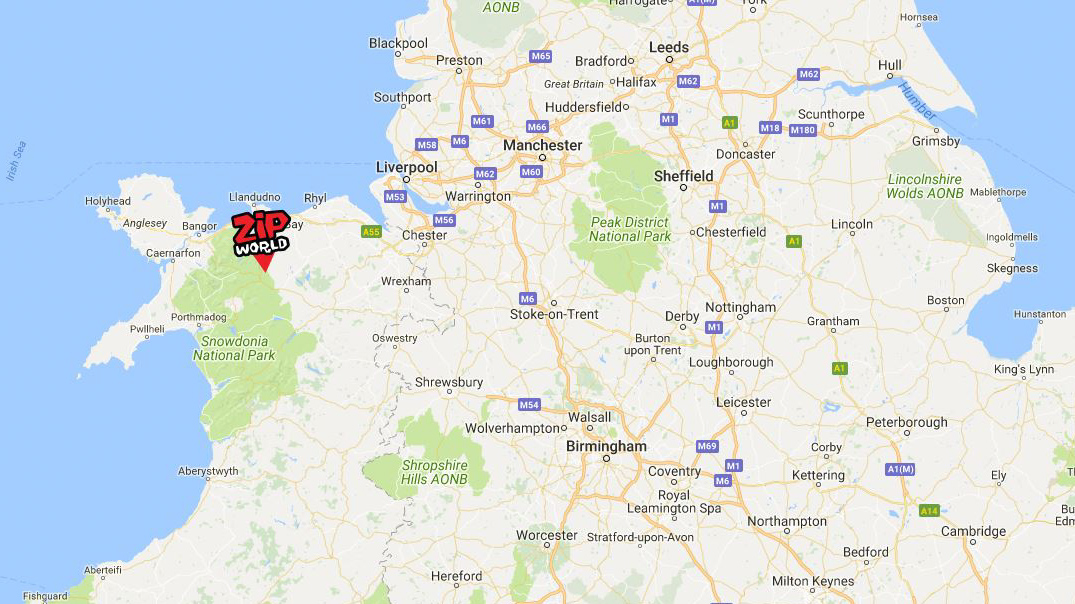 How Much Does It Cost?

Note: Children aged between 3 years to 8 years old can only ride the coaster if accompanied by an adult.

Tickets can be purchased either online here or at the reception hut. I would suggest you book in advance (especially at weekends) to guarantee your preferred time slot. Saying this, we did book on the day and were able to get tickets for their afternoon 6pm slot.