9 Things You Should Know About Boracay

Most of you already know how much I love animals – big, small, furry – so it should come as no surprise that we made a slight detour on our way back from Wales, to visit to the Monkey Forest! It was only a slight detour, and would break up our long drive back to London, so off we went!

Tickets cost us £8.50 per adult (£6.50 per child), and if you are driving, then you’ll be able to park in the large on site car park. Click here for more info on Trentham Monkey Forest. 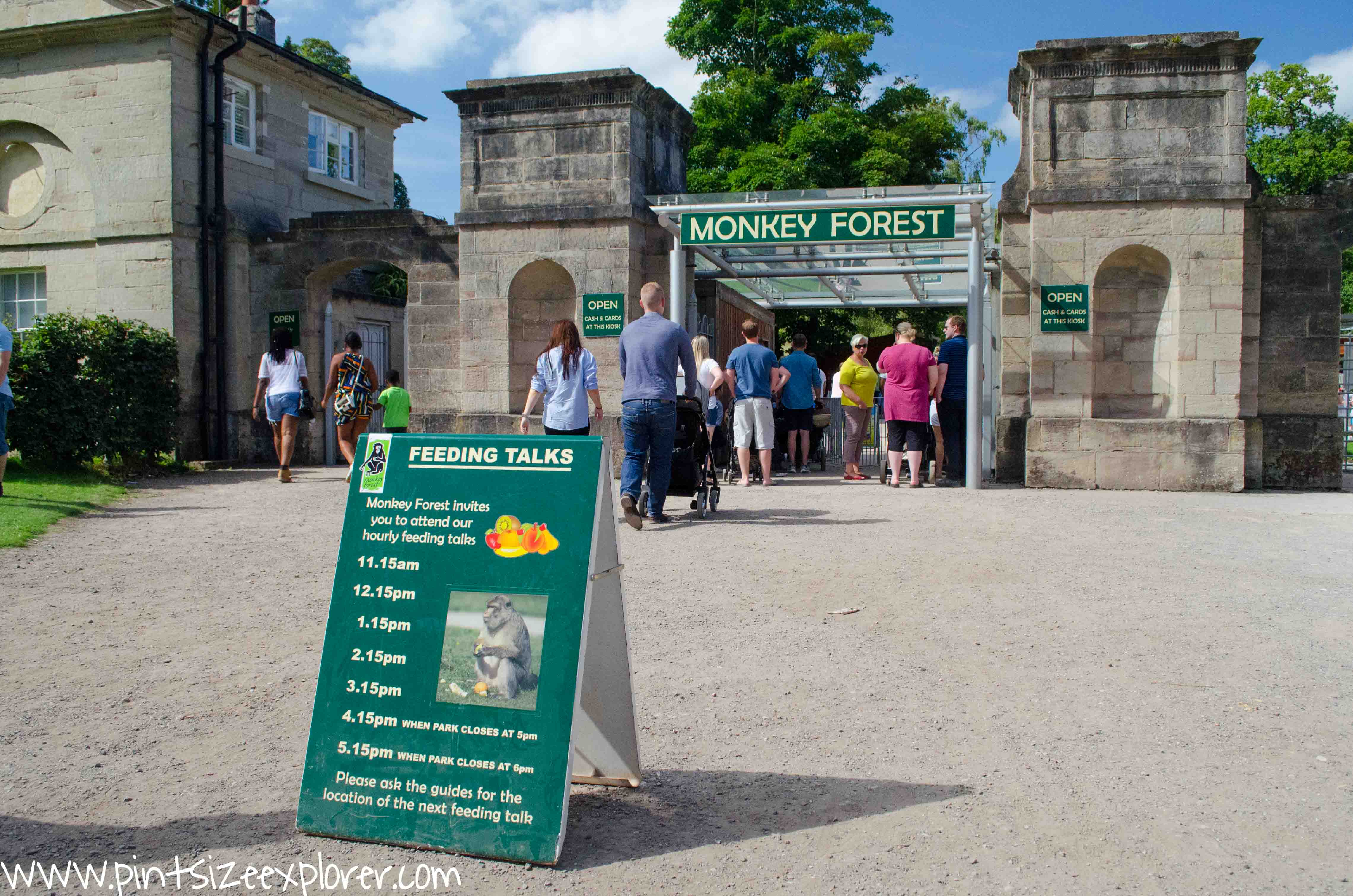 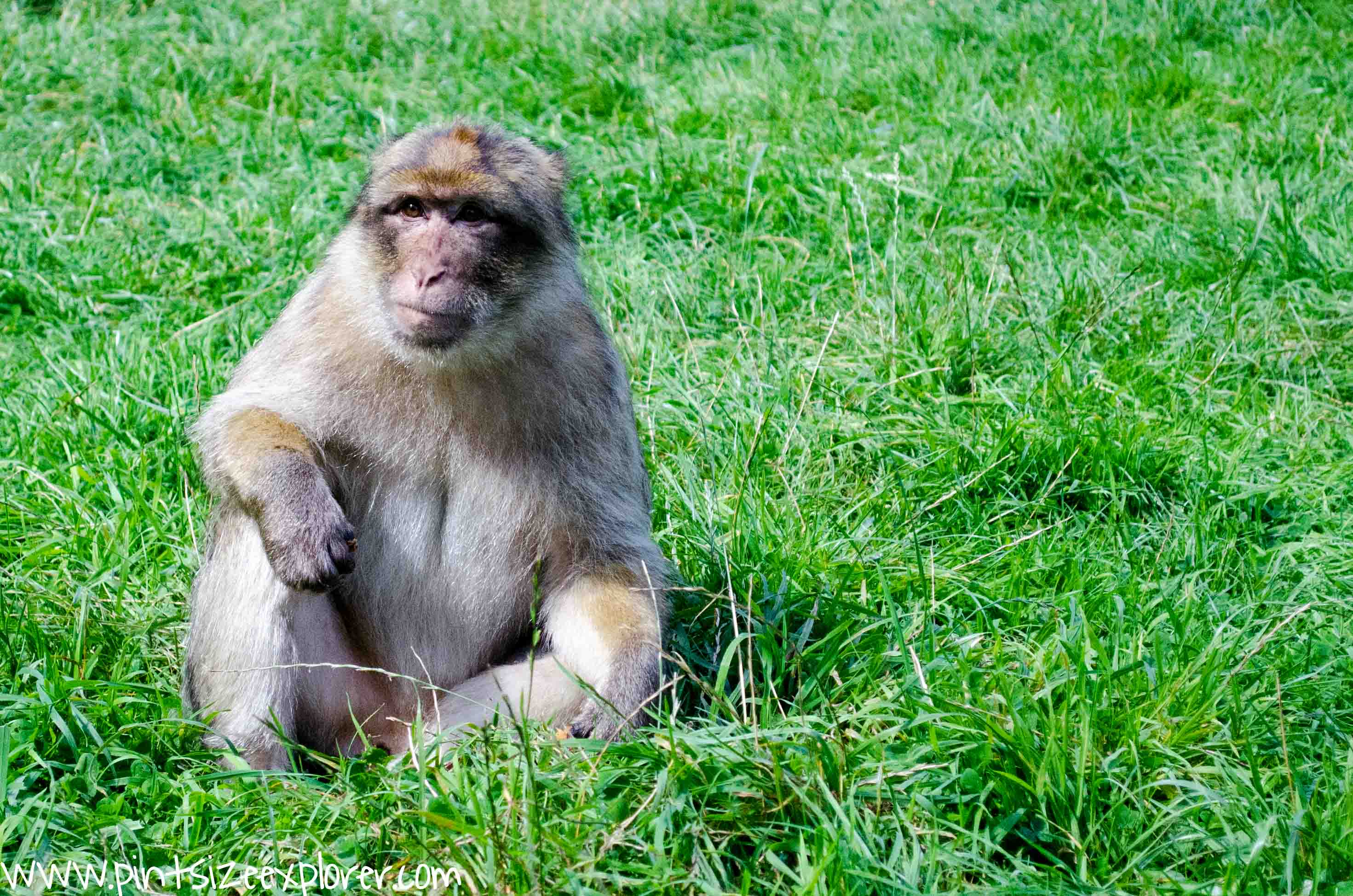 Located in Staffordshire, Monkey Forest is the only UK park where visitors can walk amongst 140 endangered Barbary Macaque monkeys as they roam free in their woodland surroundings. Climbing, sitting, playing – these cheeky little monkeys were up to no good wherever they were in the park! 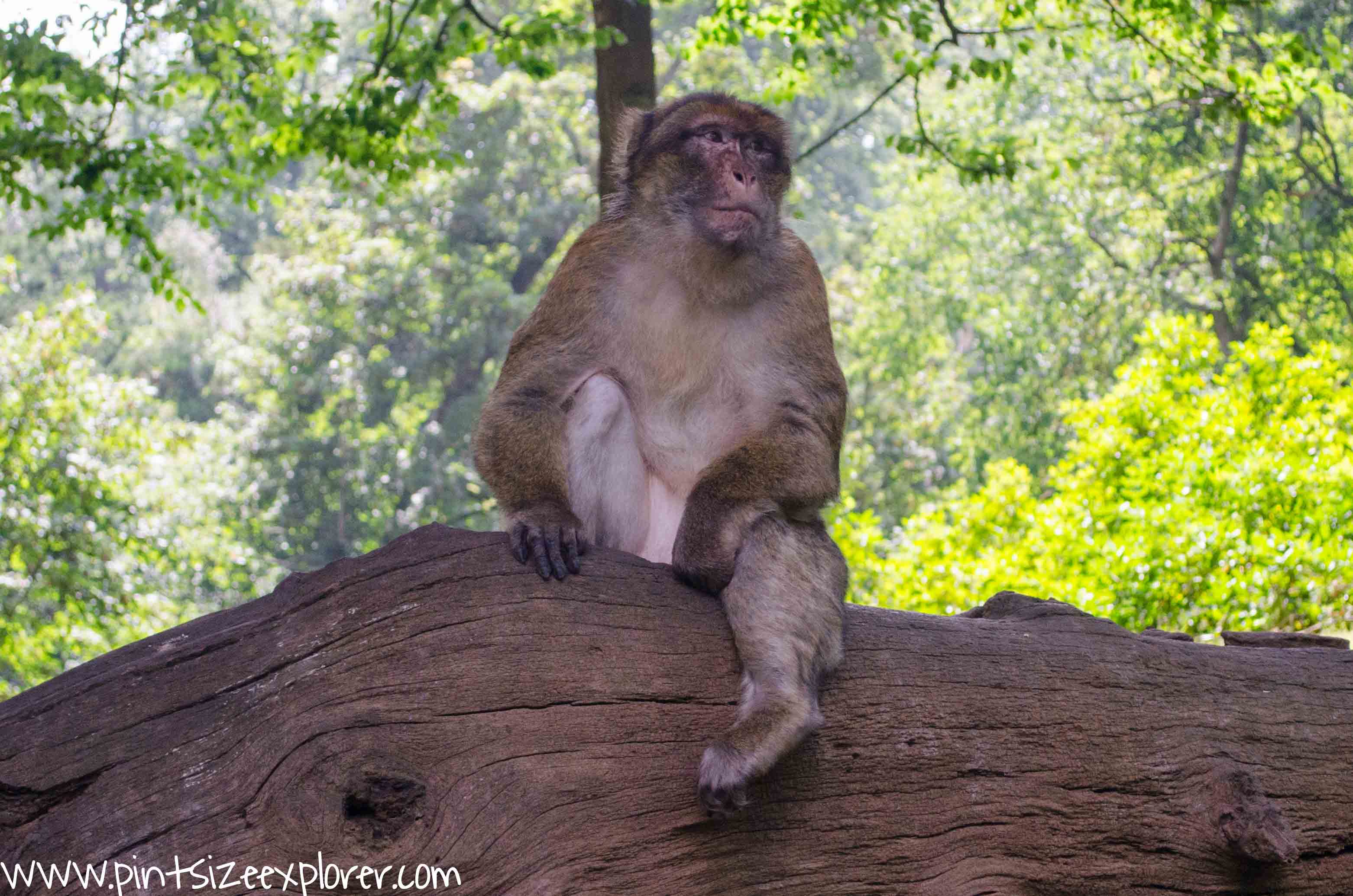 Upon entering the park there was an open space where a café, shop, info boards and video centre stood. To access the monkey woodlands you must then enter through an additional set of secure gates. It was a beautiful hot day when we visited, and many people were sat outside on the grass enjoying a bite to eat. Don’t worry if you haven’t brought any food with you as you can pick up something to eat in The Banana Café. Next to the cafe you’ll find The Jungle Shop, a store selling all sorts of monkey memorabilia and gadgets. Tourist attractions like this are notorious for having over-priced café’s and food stands, so a homemade picnic is a great alternative! 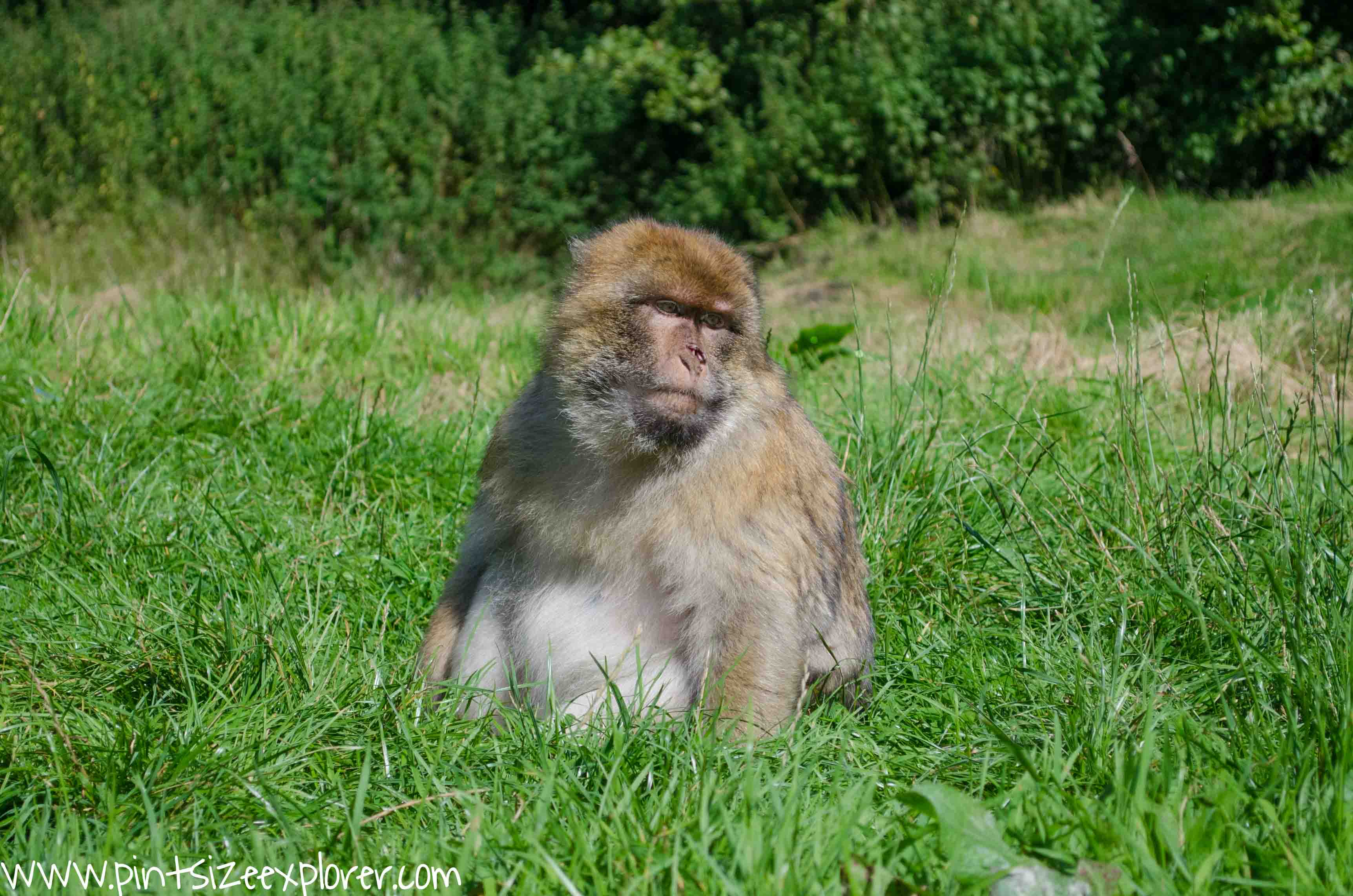 Before you enter the monkey enclosure, be sure to stop by the info centre, a covered area that had a number of large display boards with lots of information about the monkeys. Next to the info centre there was a video room playing a loop of monkey movies (more informative than fun). 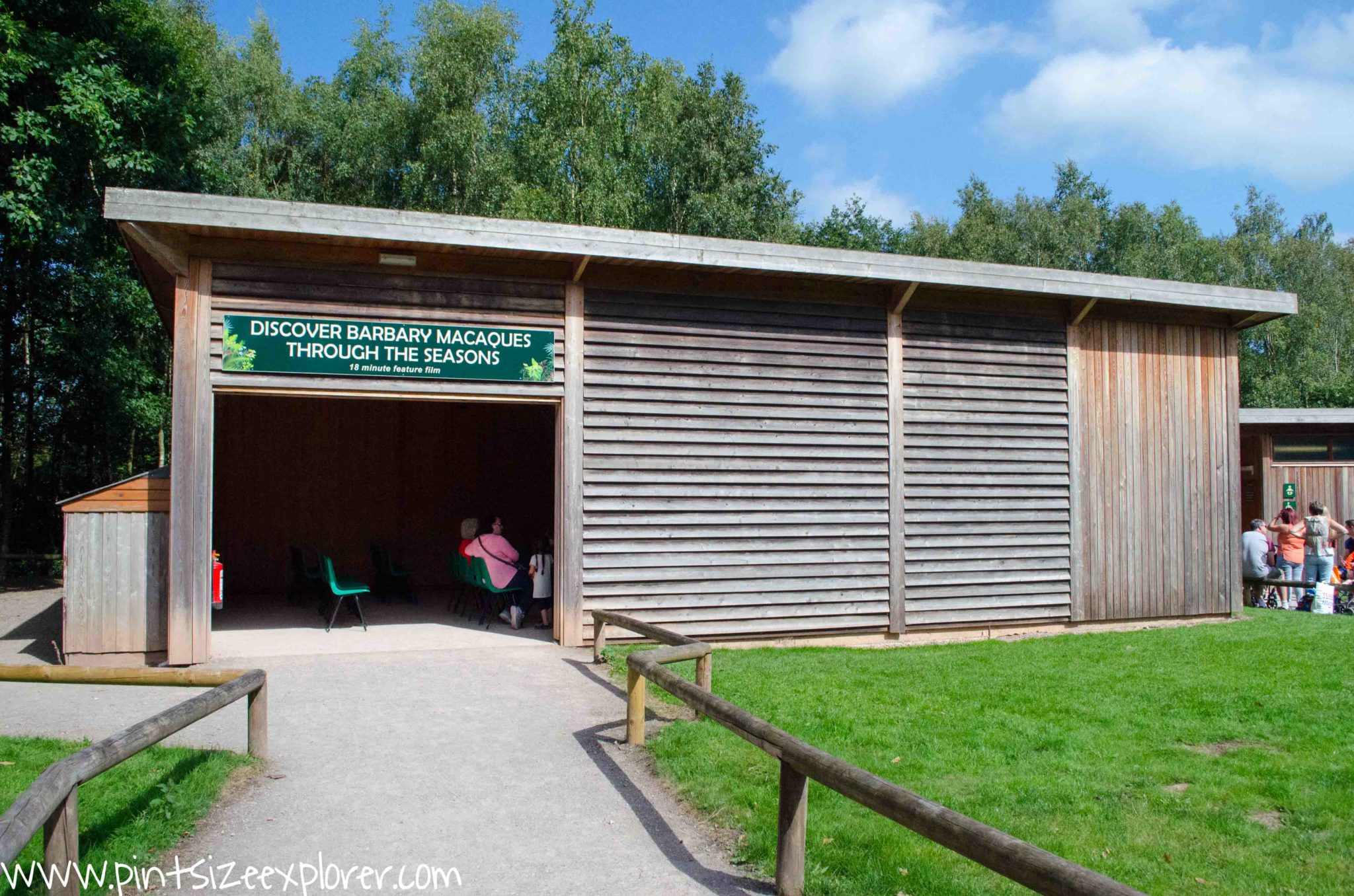 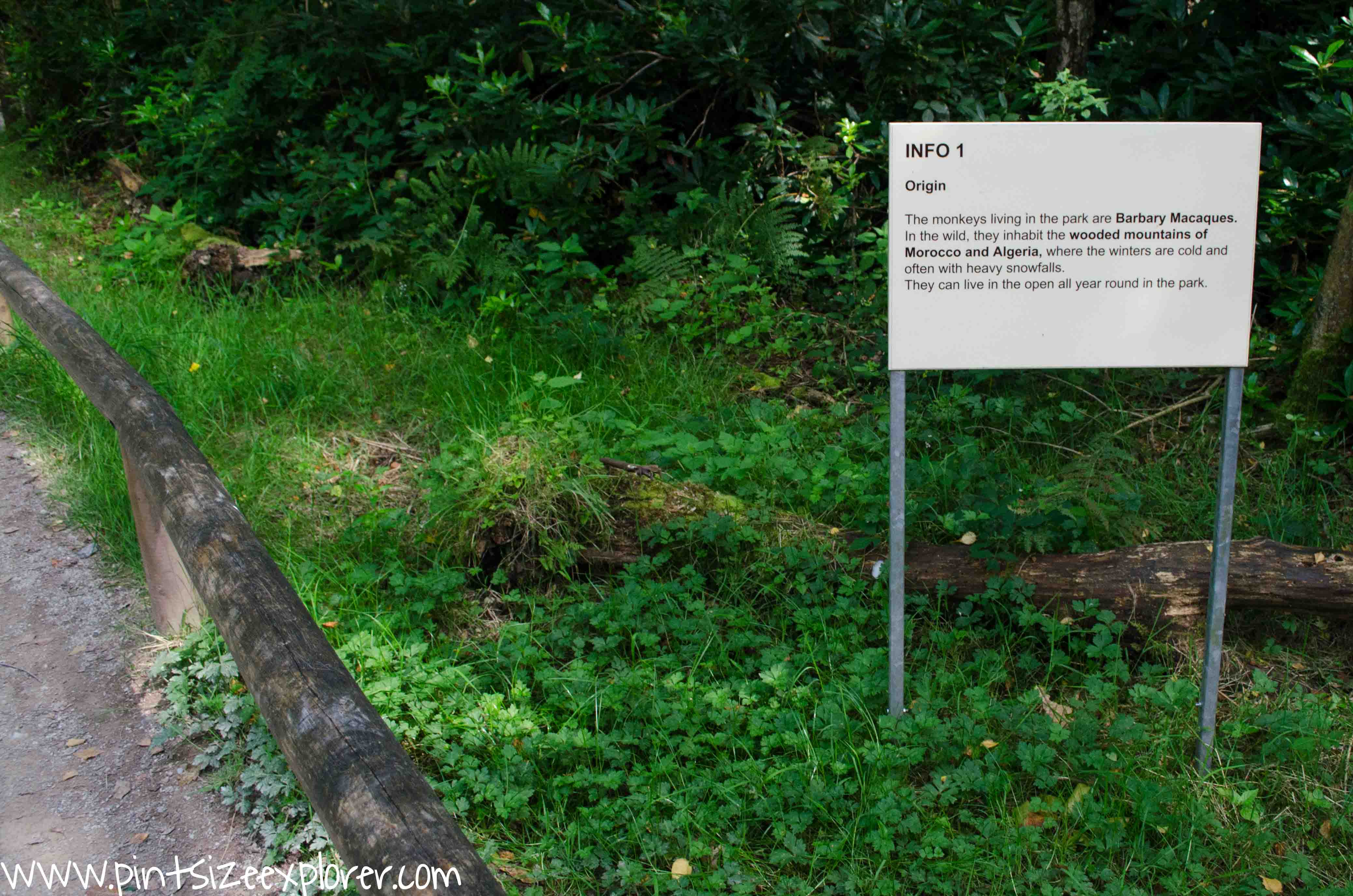 Once inside the enclosure, keep an eye out for the numerous info boards dotted throughout the route. Numbered boards displayed many interesting facts, such as the origin of the monkeys, and their grooming techniques. There were also some multiple-choice question boards, where the answers could be found by flipping up the lower half of the board. 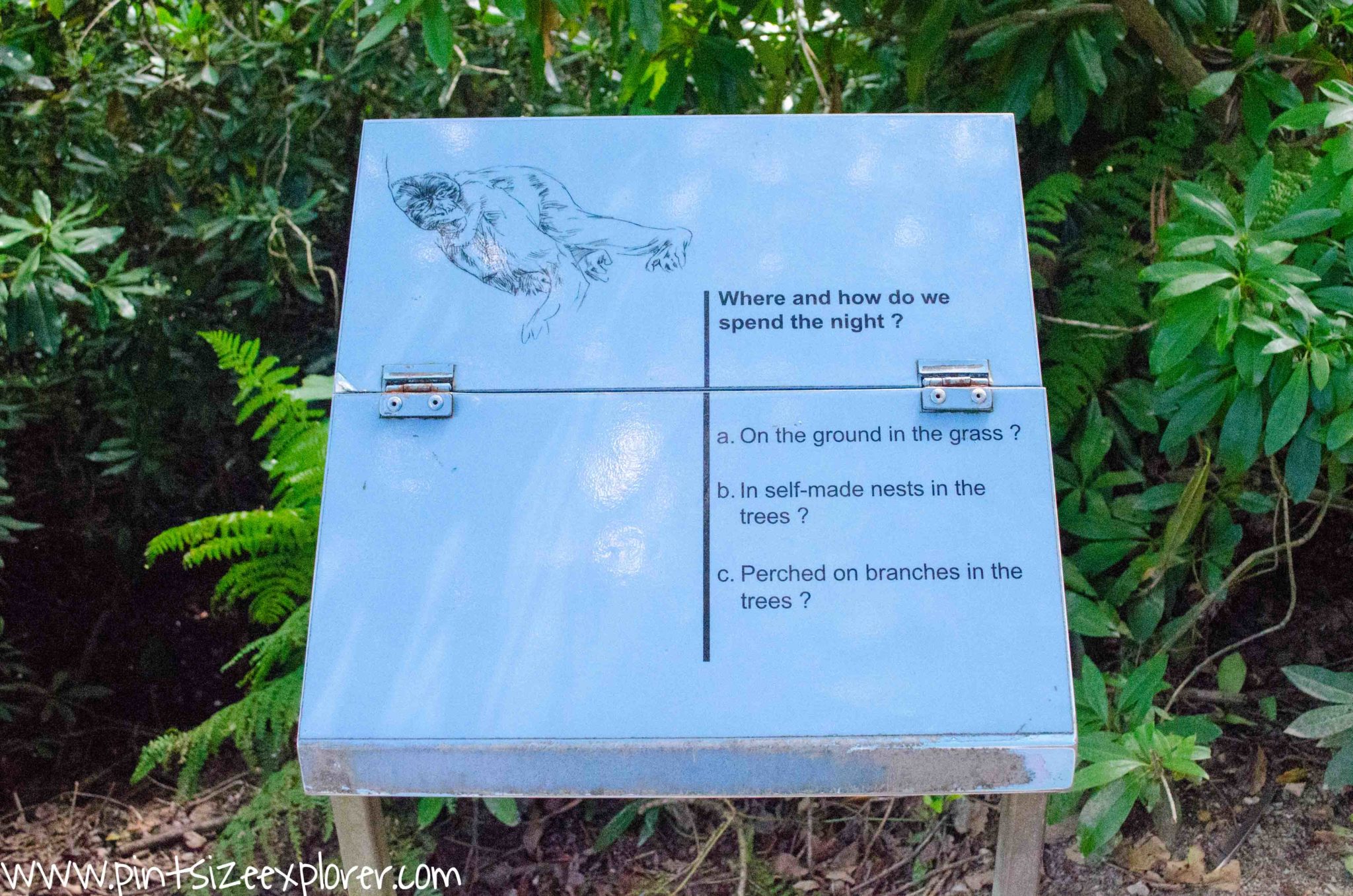 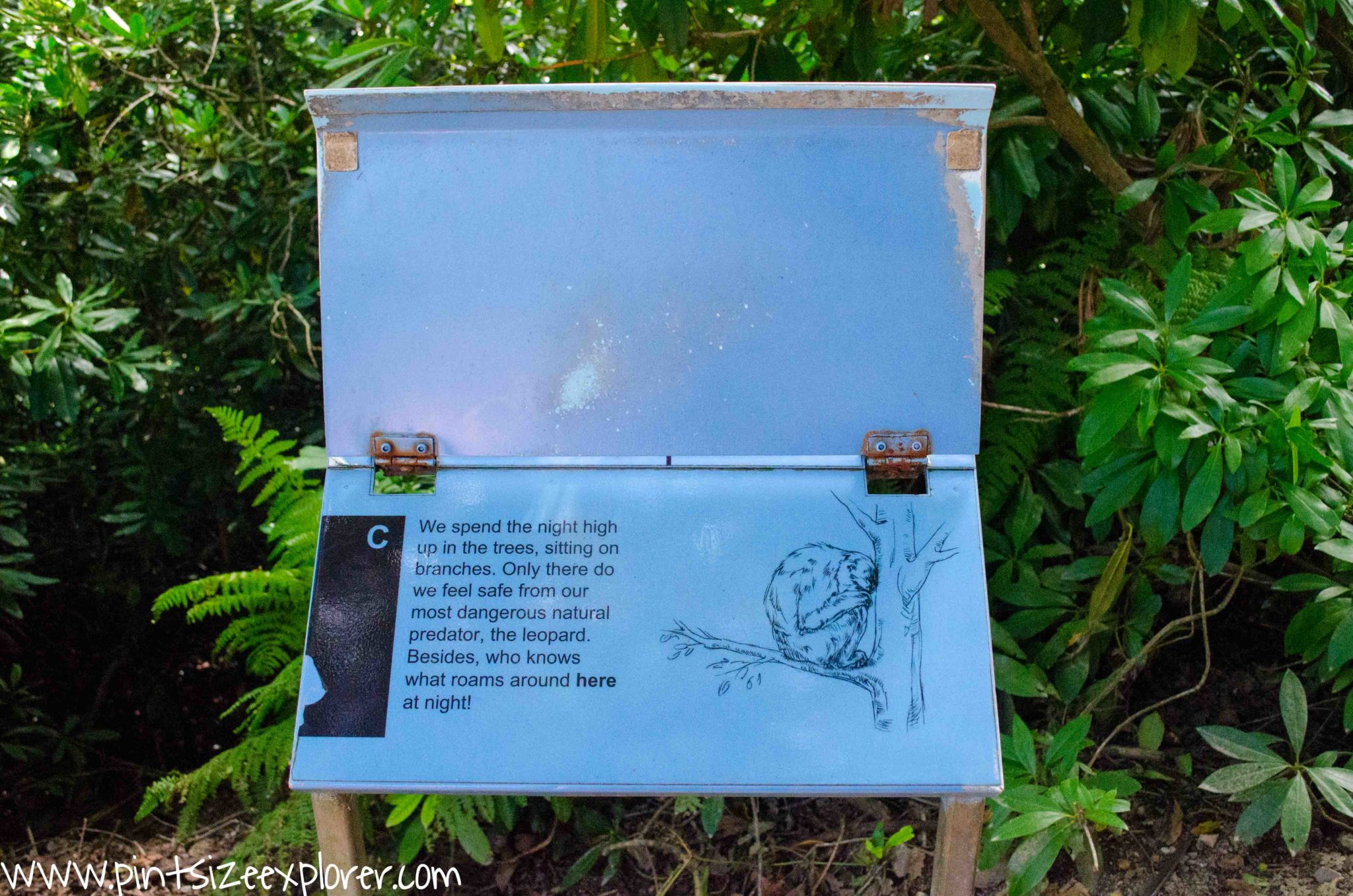 As we approached the enclosure, a lady with a very loud megaphone announced a few basic do’s and don’ts, and anyone with a plastic bag was asked to leave it behind for the safety of the monkeys.

Inside the enclosure there was only one path to follow, so you couldn’t get lost. The monkey walk itself was only 3/4 of a mile long and looped in a circuit throughout the woodlands. If you weren’t visiting on a busy bank holiday day like we were, then you’d easily be done within 45 minutes. 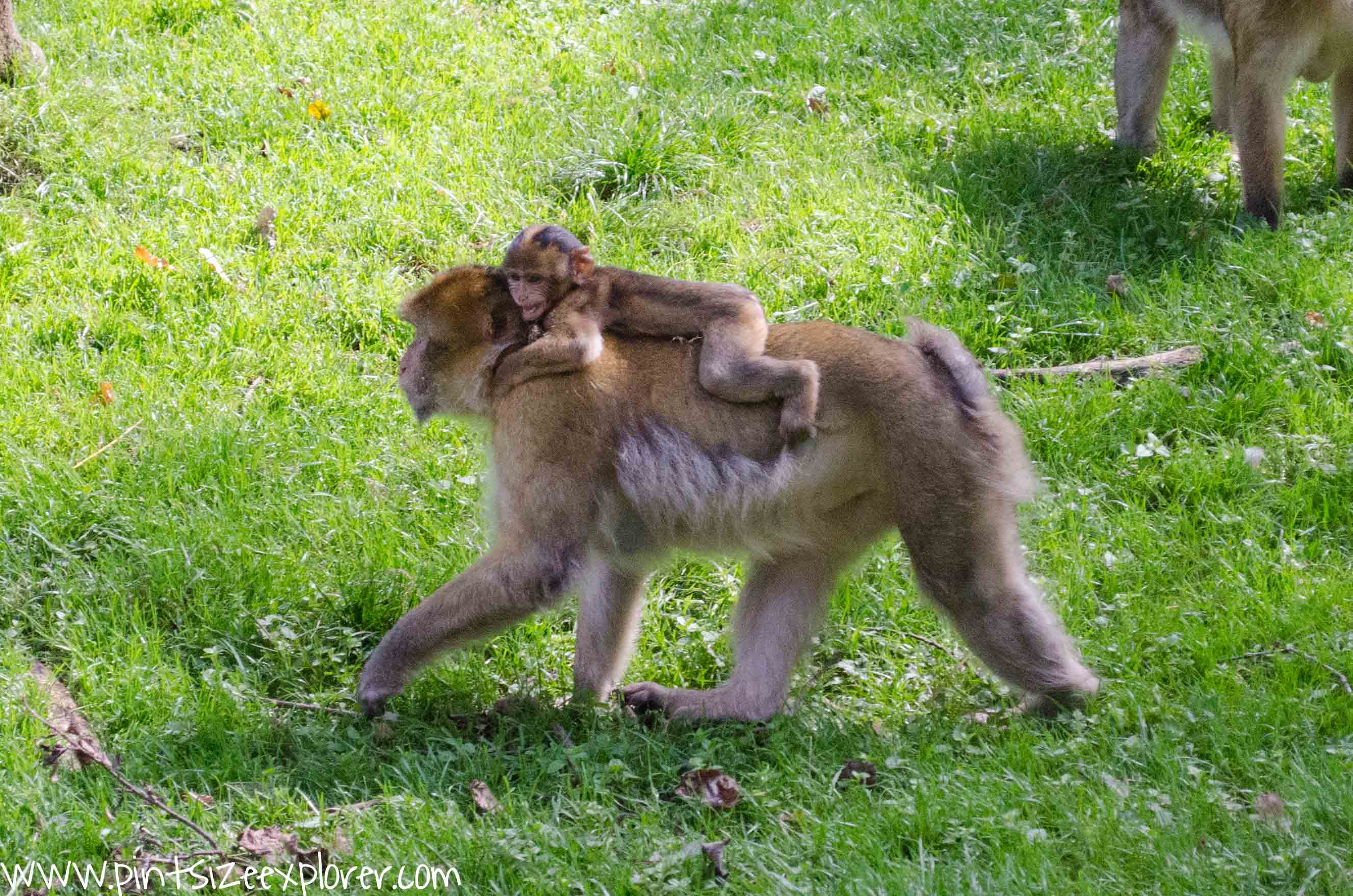 There were two large feeding points which hosted hourly monkey feeding at quarter past the hour from 11:15 until 17:15. Sadly, it was super busy when we visited (bank holiday Monday of all days!!), so the feeding sessions attracted such a large number of people that we swiftly stopped by, before moving on to avoid the crowds. At 5 ft tall, I didn’t have much chance of seeing anything, unless Adam was prepared to hoist me on his shoulders (and that’s never going to happen!), or I was prepared to squeeze through the crowds to get near the front.

Park guides can also be found throughout the enclosure, so feel free to ask as many questions as you like. We got chatting to a nice lady who somehow ended up explaining how the male monkeys mount each other as a form of bonding. That’s my monkey fact of the day for you 🙂 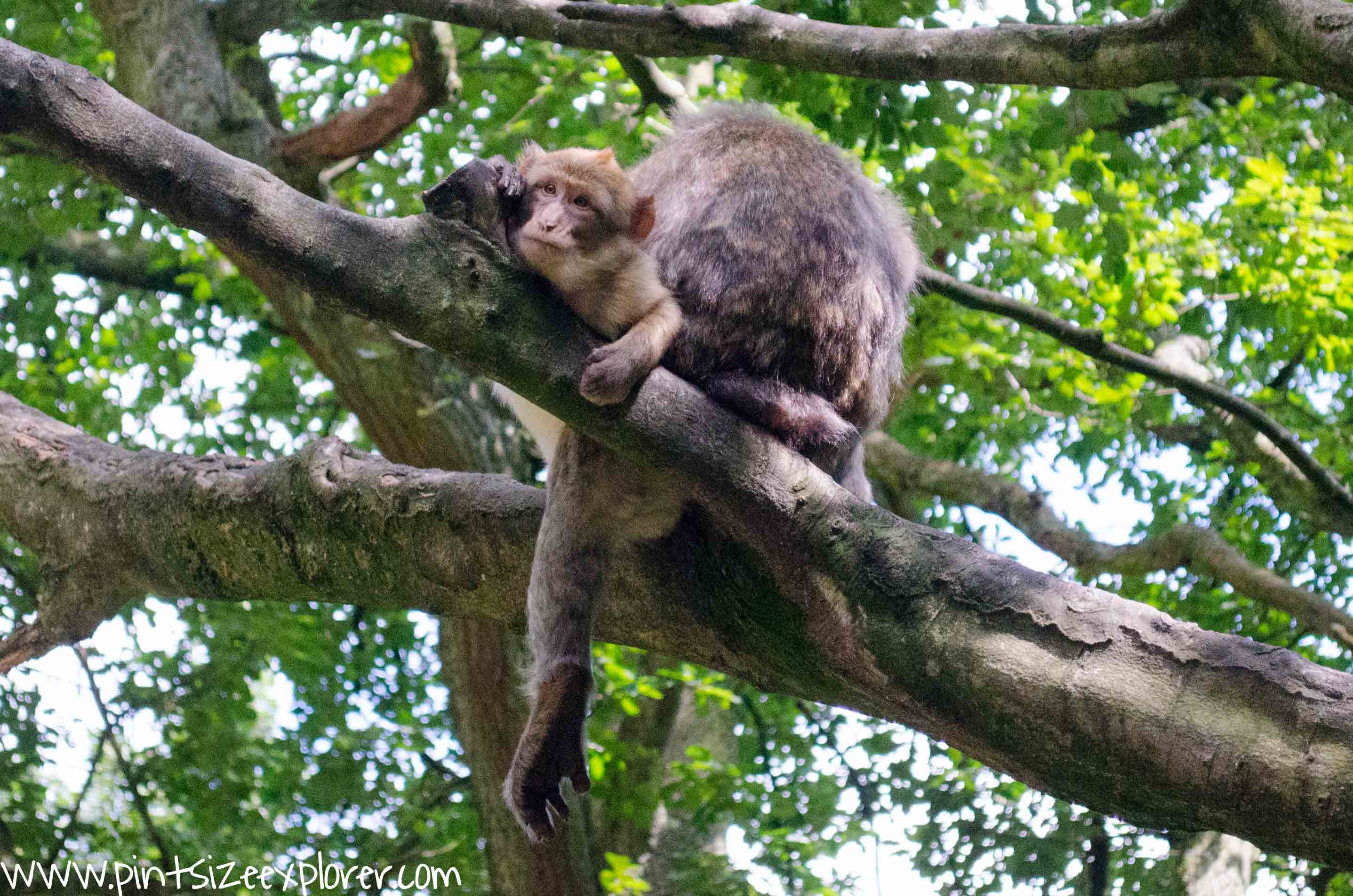 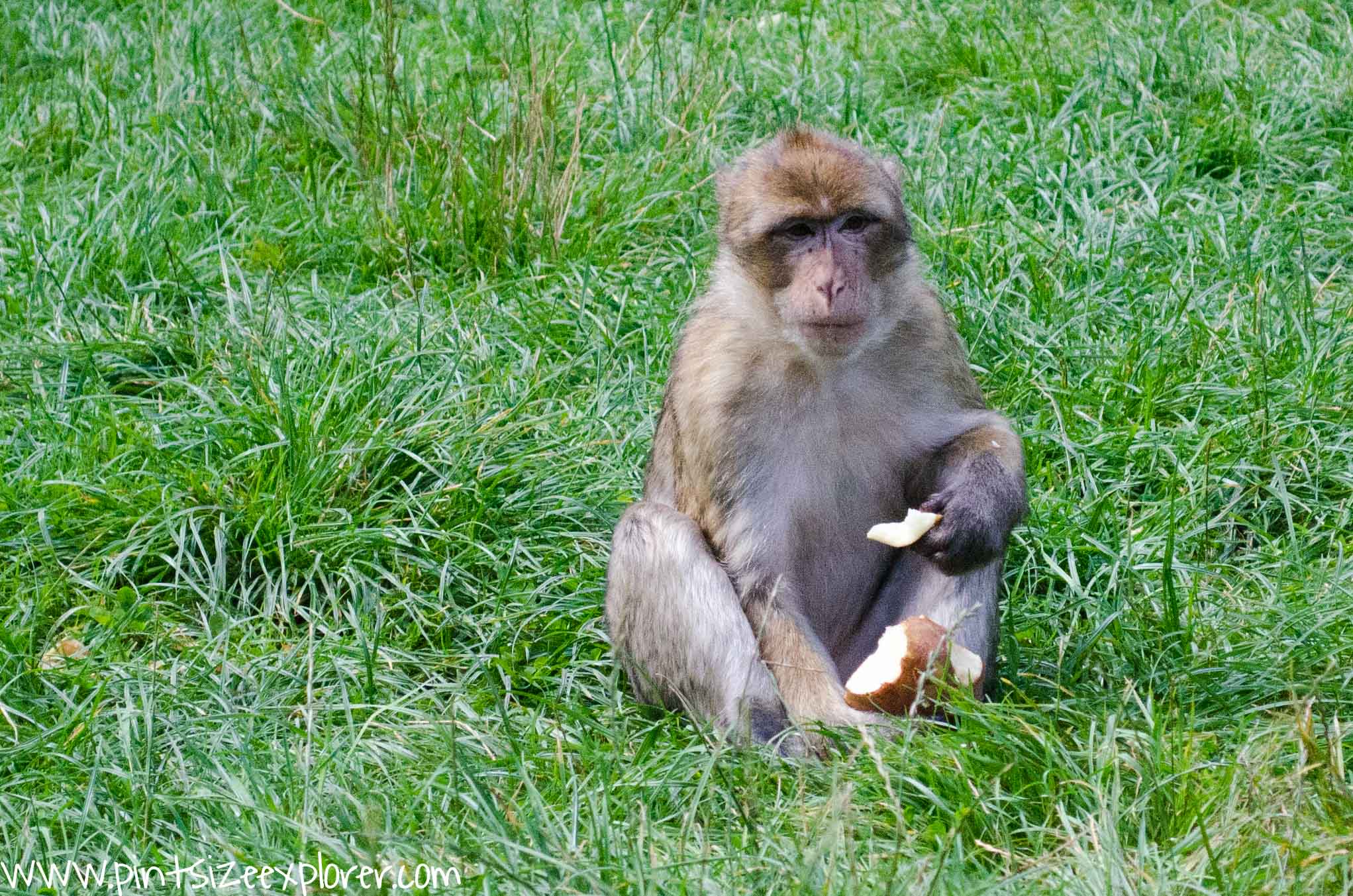 It must have been a busy summer for the monkeys as currently there has been an influx of babies being born in the park. There were LOADS of teeny tiny babies who were three months old. All the babies were either play fighting with their monkey friends or being carried around on their mother’s backs. Either way, it was super cute to watch!

If you have small children and don’t mind the drive – or if you just love animals in general like us – then this made for a great day out! 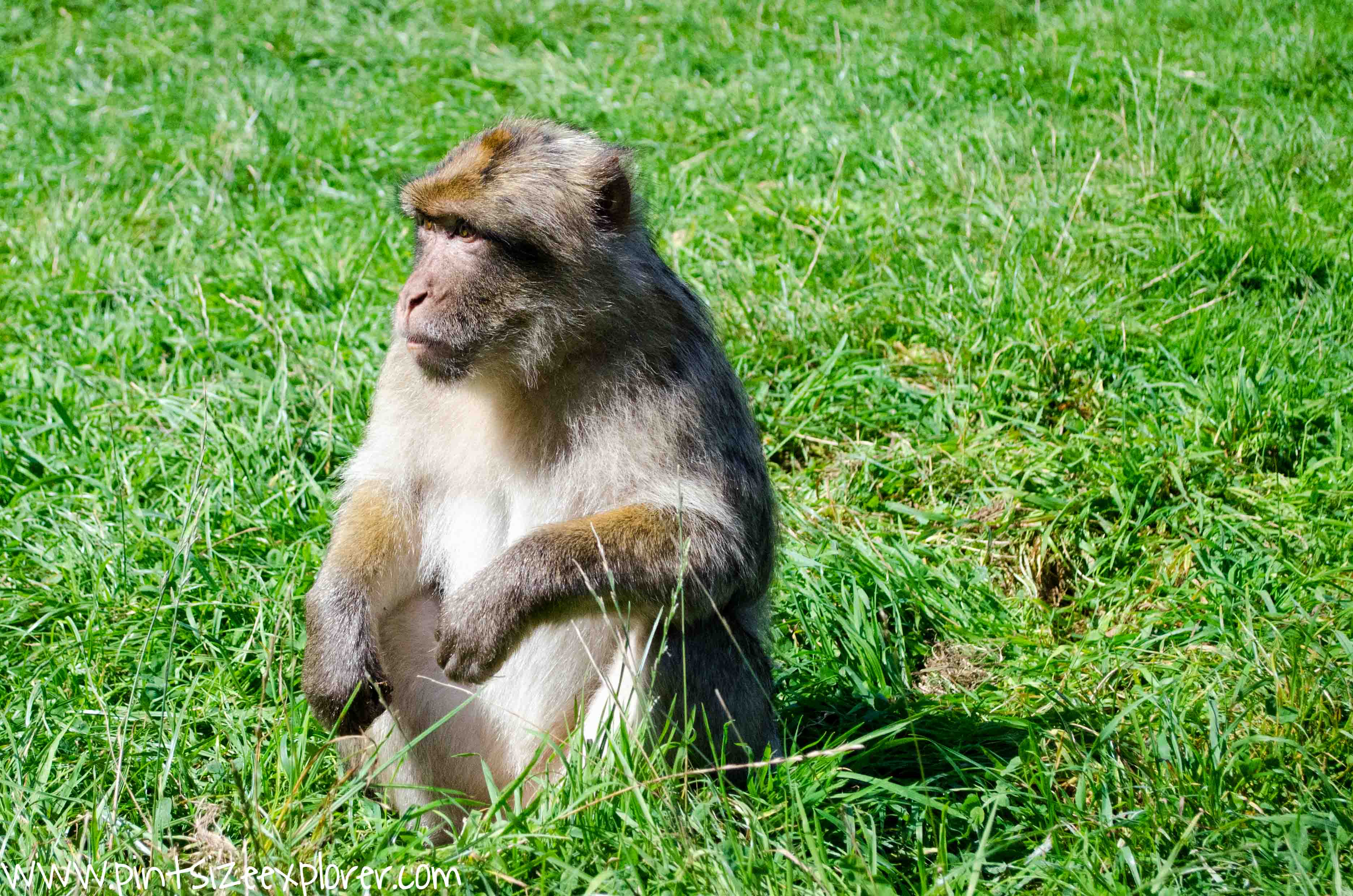