Volcano Boarding – When It All Goes Wrong!

I would never really refer to myself as an adrenaline junkie, but as soon as I booked my tickets to Nicaragua, I knew there was one activity that I wanted to do – and that was to go volcano boarding. We would hike up Cerro Negro, Nicaragua’s youngest volcano, sit on a wooden sledge like board, and slide down at speeds unknown.

I’ve done some pretty adventurous stuff in the past (sky diving, parasailing, zip lining) and I’ve always been glad that I’ve pushed myself to do something I didn’t think I had the balls to do. Sounds great, right? But what happens when it all goes wrong? Unfortunately for me, I got to find out the hard way. 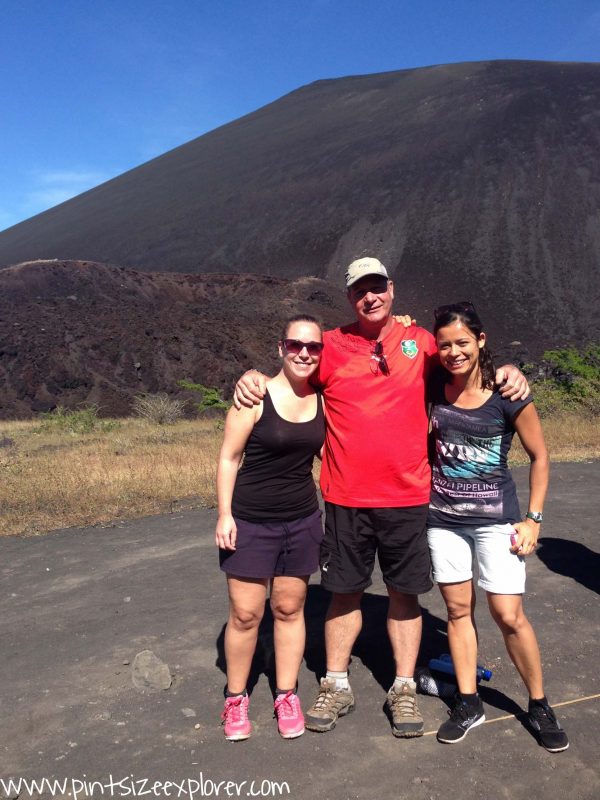 We checked in at a small office, signed a waiver, grabbed a rucksack filled with our gear, and picked up a board each. We piled into a small minivan that drove us to the base of the volcano where we would begin our hike. We’ve all hiked before and knew the summit was over 700 meters high, however none of us  realised how difficult the terrain would be.

That old saying of one step forward and two steps back – well that’s pretty much the best way to describe the hike. With no clear path to follow, trainers with no proper grip, and nothing to support myself as I heaved myself forward, this hike was ridiculous. With every step I took, the loose volcanic rocks and gravel would impede my progress as I slide a few paces backwards. 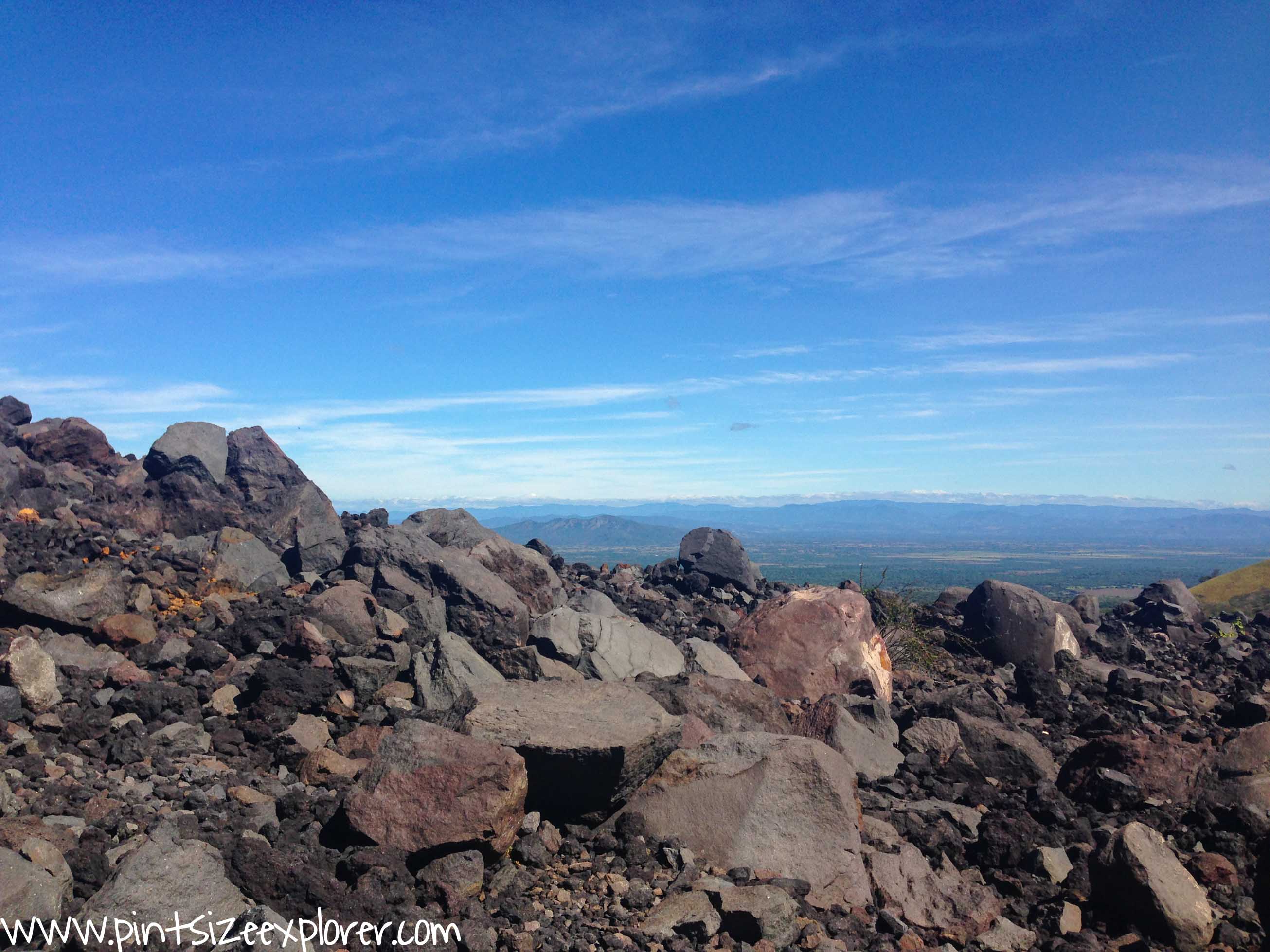 There were three rest stops along the climb, where the ground levelled out enough for us to pause for a few moments. What I haven’t mentioned was our backpacks. These oversized backpacks, which had clearly seen better days, had non-adjustable shoulder straps so it was impossible to adjust the bag to fit your back to enable you to carry the weight comfortably.

We also had to carry our own board, an ancient slab of wood that couldn’t be carried horizontally against our chests as the winds would push against the it, making it extremely difficult to hold your balance. The higher we climbed the more the (invisible) path narrowed, and I became increasingly aware just how easy it would be to slip down the side of the volcano. Thankfully everyone shuffled along, eager to reach the summit! 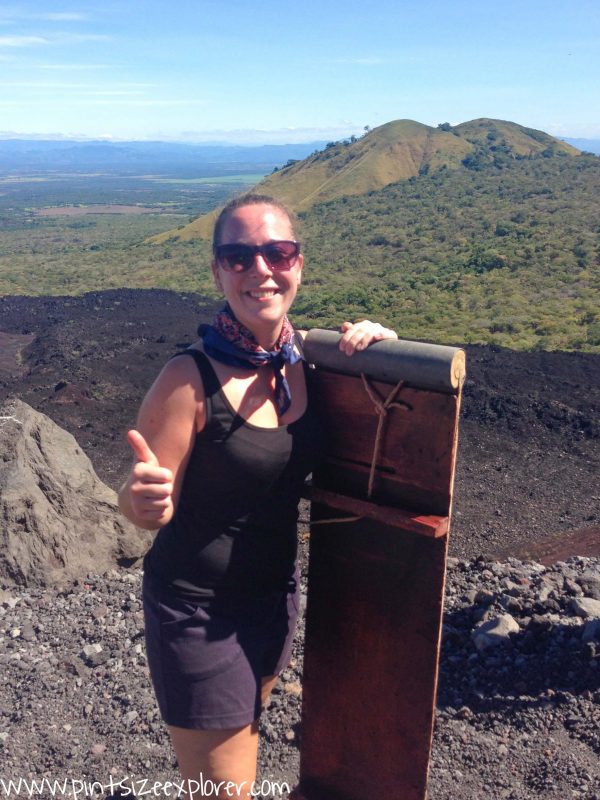 Once we made it to the summit everyone was relieved and promptly dumped their boards and bags to take in the incredible view. This was a Kodak moment for sure! We put on our one-size-fits-all boiler suit, along with our goggles and other bits of protective gear that we were provided with as we gathered for a briefing session which took all of 5 minutes. 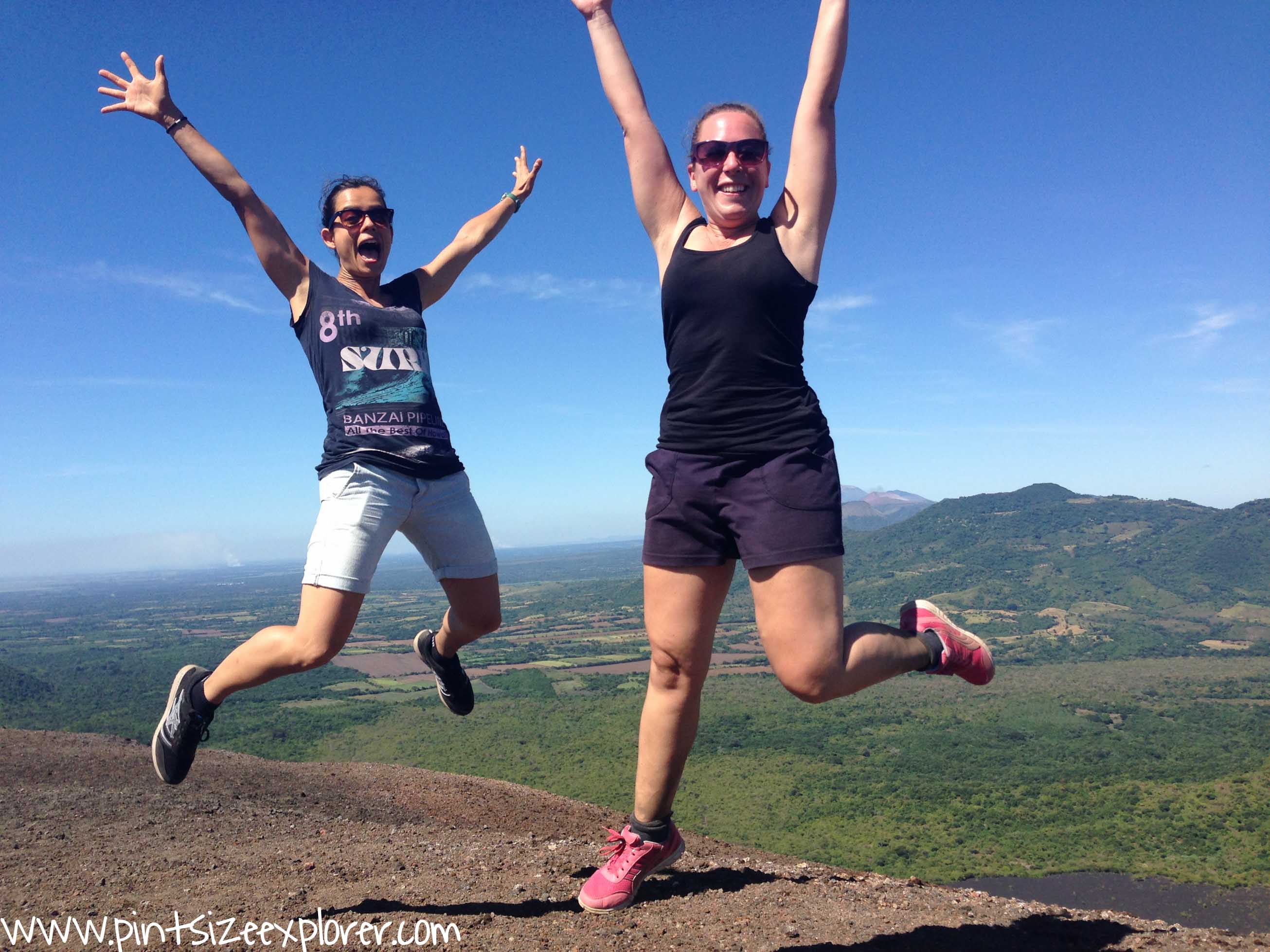 Two points to note – Firstly, control your speed by laying back to go faster, or use the rope at the front of the board to sit yourself up to slow down. Secondly, there are no brakes on the board, so to slow yourself down you must straddle the board and use your feet in the gravel as your brakes.

As we approached the edge of the summit the fear kicked in as I literally couldn’t see over the edge. WTF. No-one had flagged just how steep the volcano was! There were two runs that the group would use, each with a guide who would let you know when it was your turn to go. Half way down the run another guide stood, and then a third guide stood at the base to ensure each section of the run was cleared before the next person went down. You then had a choice of standing up (like snowboarding) or sitting down (like a sleigh) to get back down. 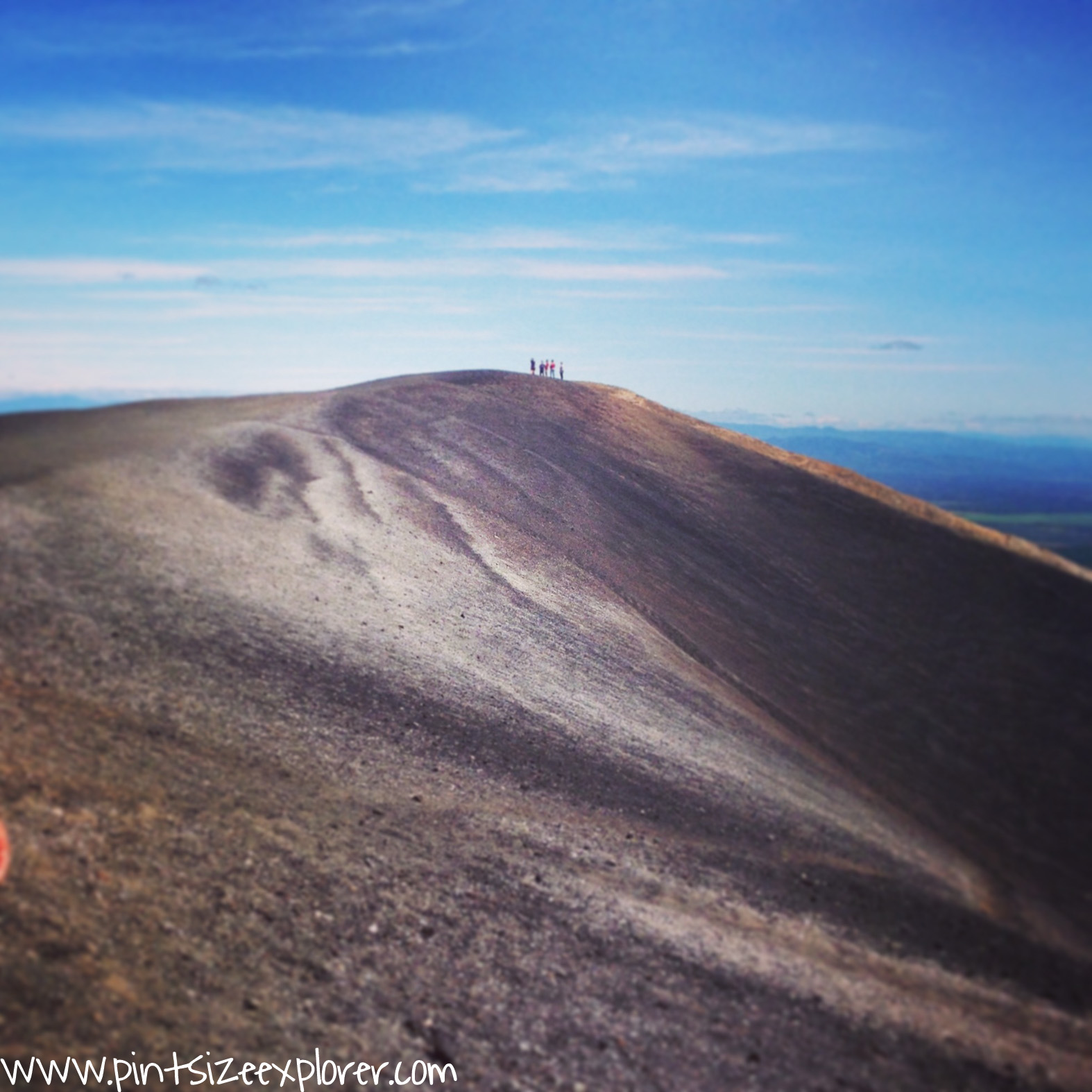 We lined up single file ready to go, and that’s when I began to have second thoughts. Perhaps this wasn’t such a great idea after all, but as Ken (an older guy in our group) slowly slid down he waved back at us to signal everything was fine. I mean if a guy my dad’s age could do this, how the hell could I not?

Sat in my ridiculous oversized green boiler suit with my pink trainers, I shuffled forward ready to go. I chose to use the board like a sleigh and slid a pathetic 10 meters forward before my board came to an abrupt stop as I wasn’t moving fast enough. Whaaaaaat. A few guys on the run next to me were standing up on their boards and they also appeared not to be going anywhere fast. 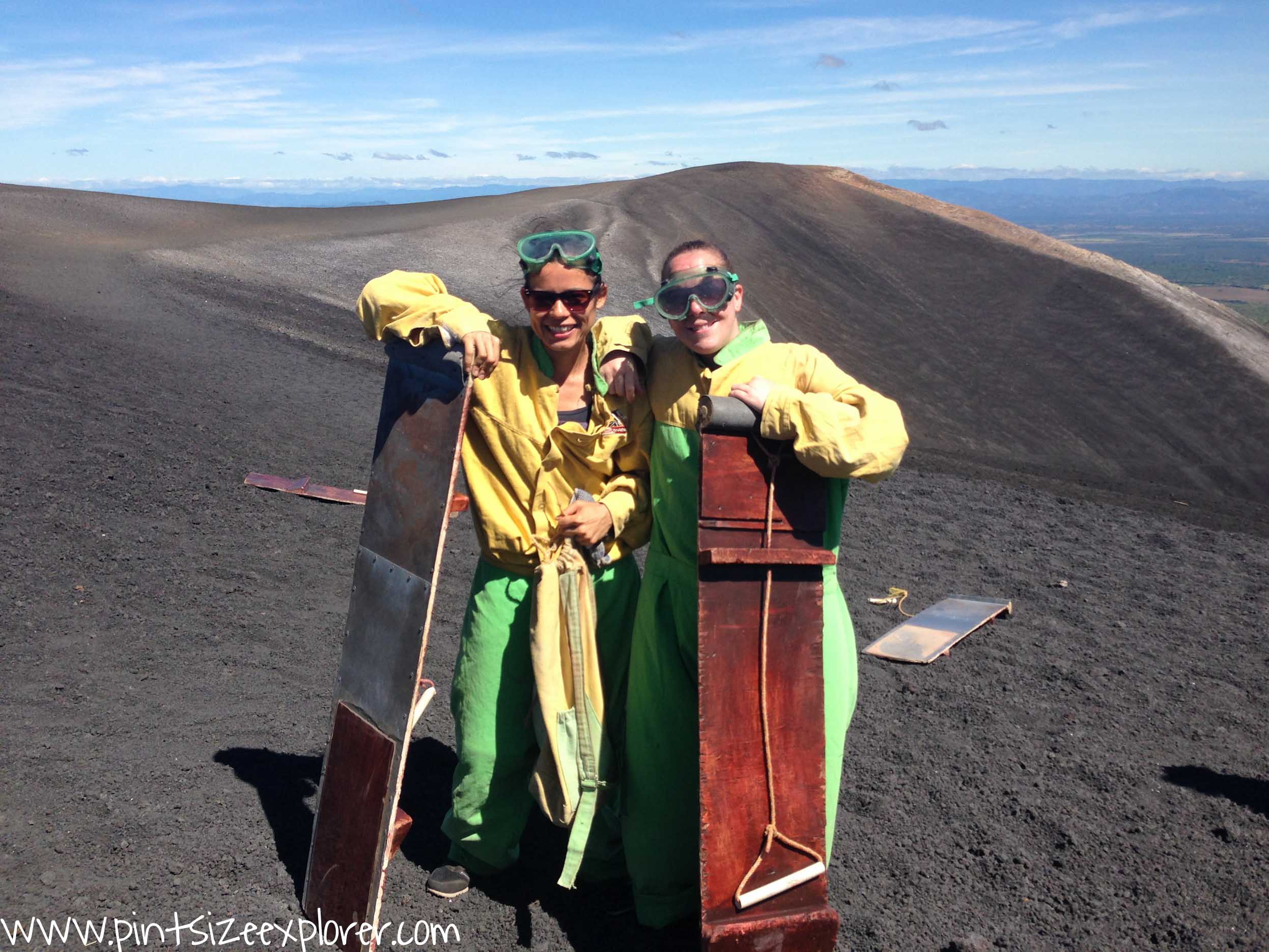 I continued down, and as my board began to pick up speed, I slid down amongst a flurry of dust and volcanic ash that was flying here, there, and everywhere. I pulled on the rope as tight as I could in a feeble attempt to hold myself upright, whilst I dug my feet into the ground as hard as I could in an attempt to slow myself down. So hard that I literally burnt off the soles of my trainers, leaving several small holes in the shoe. 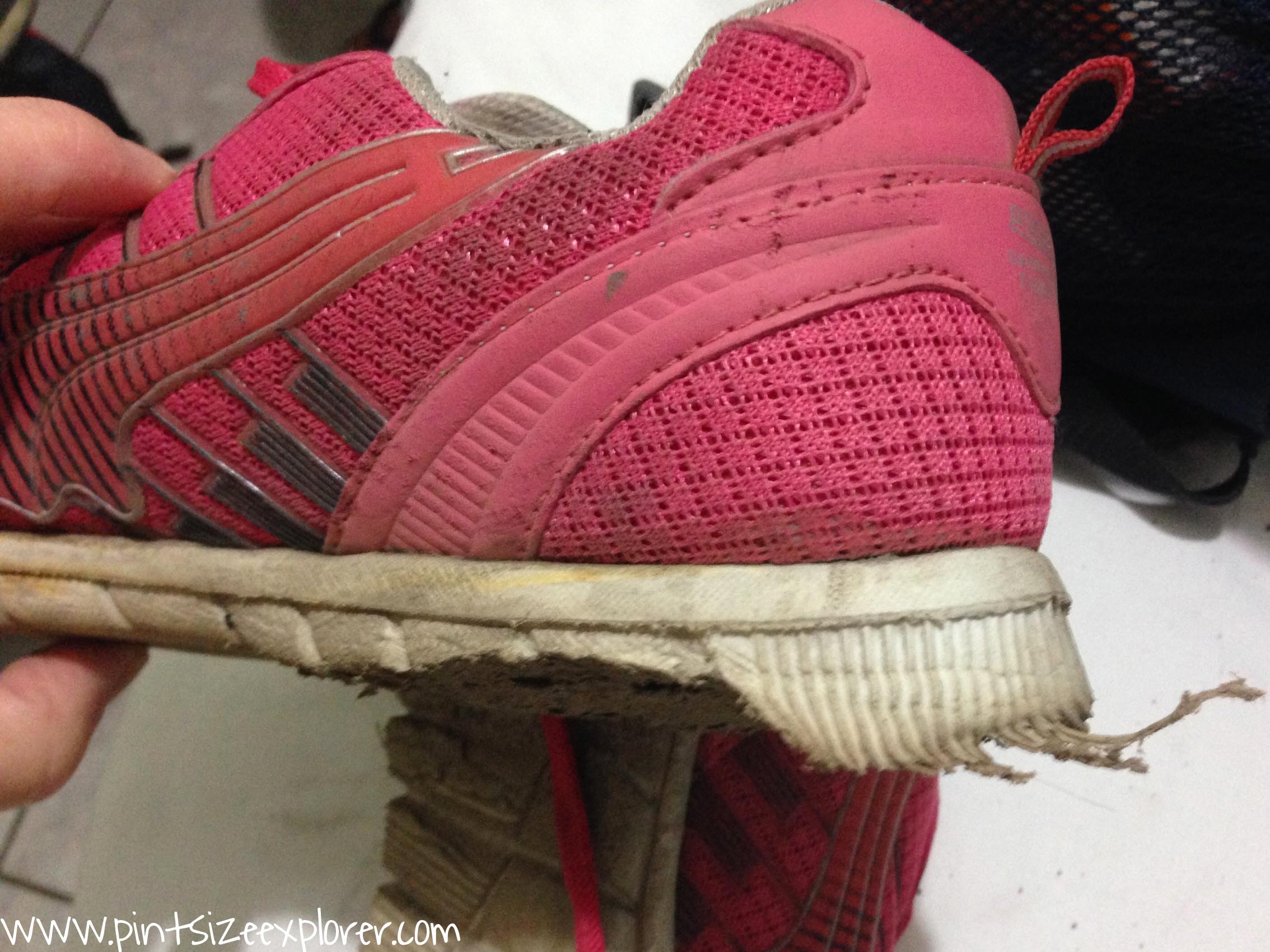 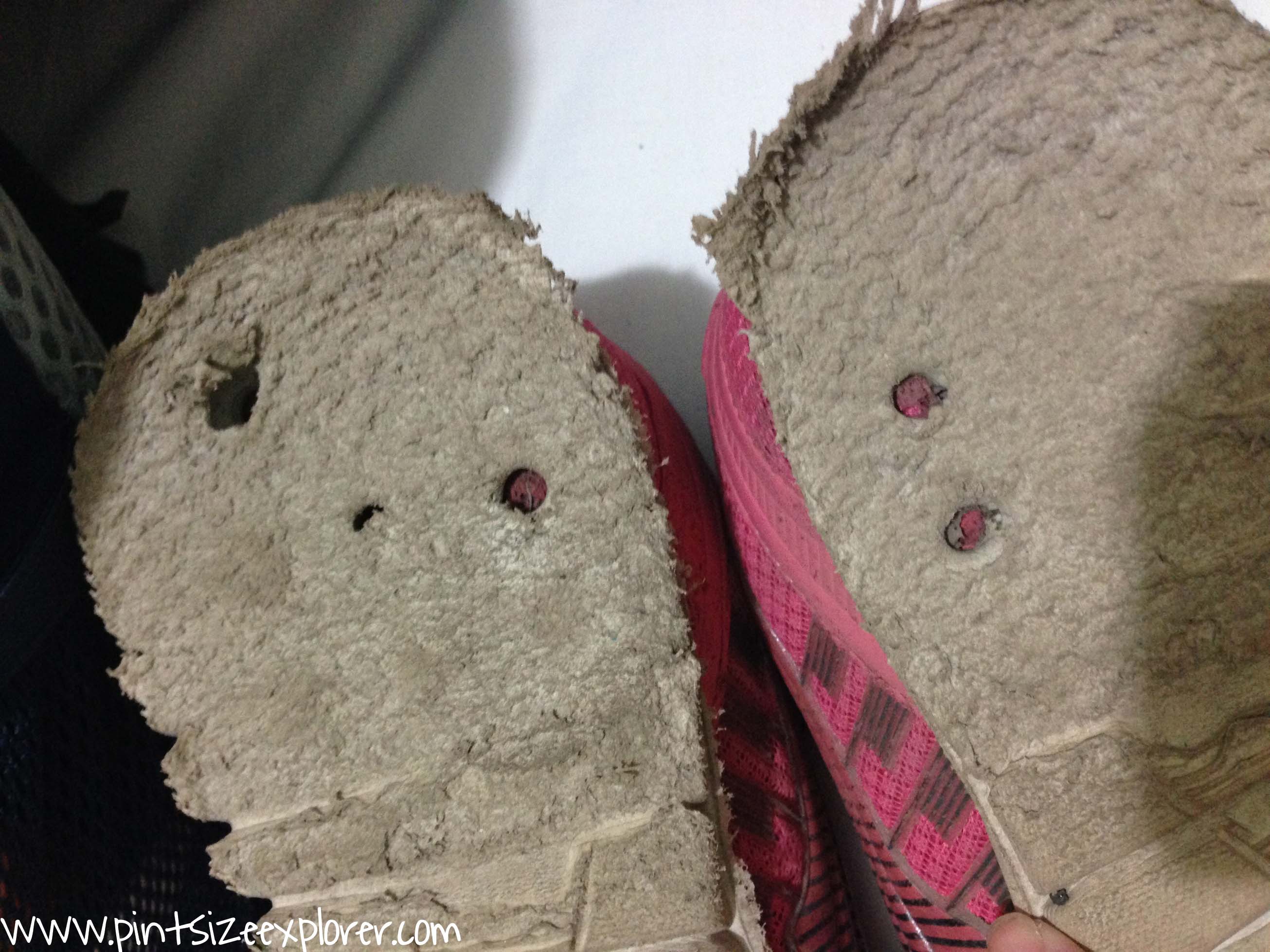 It was impossible to slow myself down and before I knew it, I had picked up too much speed. There was a loud thud and everything went black. As I opened my eyes I saw a pair of feet running towards me. I looked up as the person caught my eye and recoiled. Crap, something had gone wrong.

I quickly realised that I’d had an accident. I thought I had just hit something and fallen forward, but I had actually smashed into a small boulder which catapulted me into the air. My body was thrown into a forward summersault and the impact of the crash meant the huge slab of wood (that was my board), was karate chopped (into two pieces) in one swift move by the entire weight of my body. 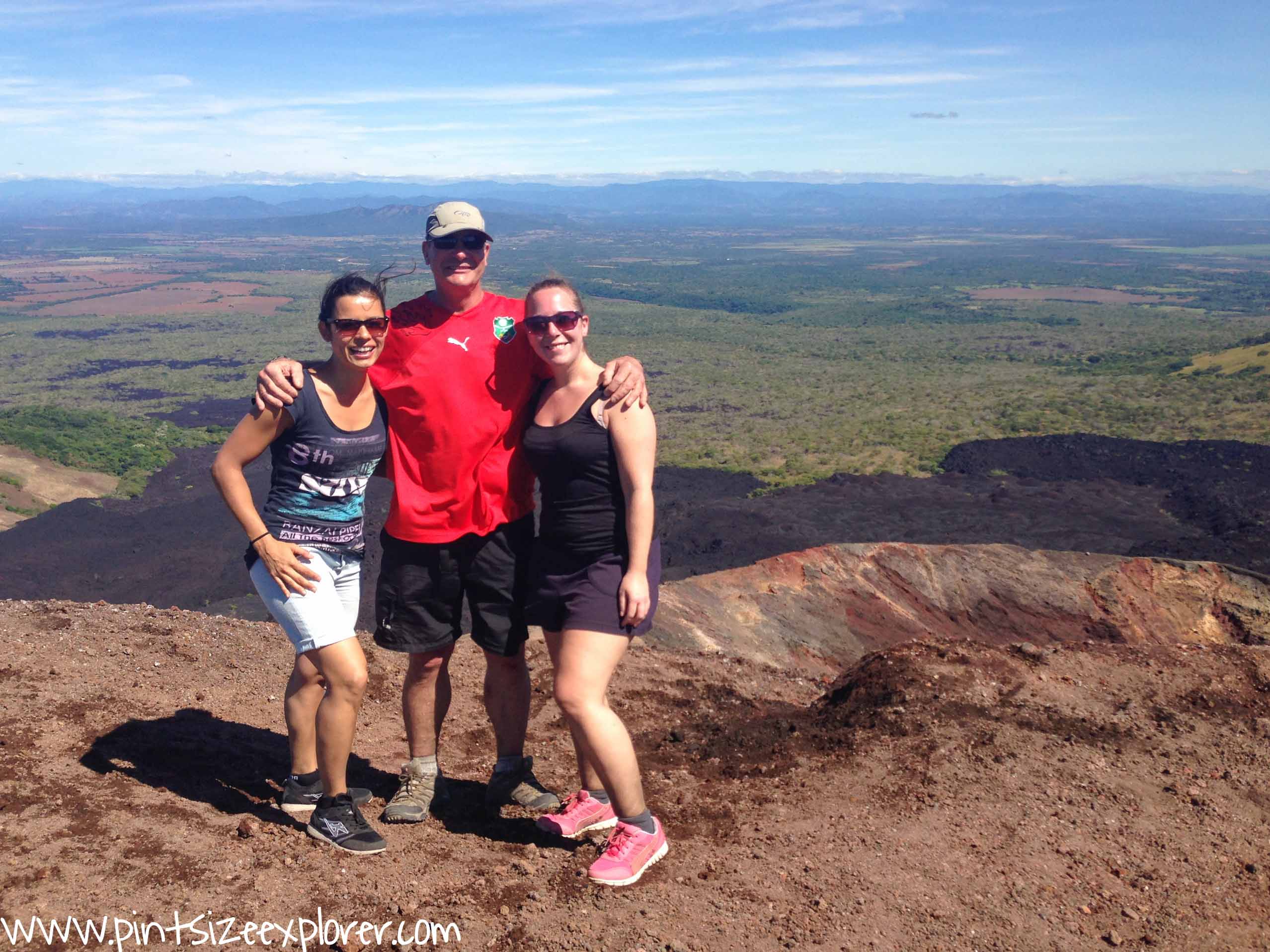 I spat out what felt like a mouthful of teeth, but thankfully it was just half the volcano that I had somehow gobbled up as I face planted the ground. My ridiculous overalls were so big that my arms and legs had become exposed to the rocks, as the material had gathered above my elbows and knees due to the speed I was going.

As my face slammed into the ground, my goggles collided with my face leaving me heavily bruised – or as I later referred to the marks, with a second set of eyebrows. The impact of my fall on all the hard rocks and gravel left me severely grazed from my forehead down to my chin, but despite the amount of blood that was oozing from my face, this really could have been a lot worse than it was. 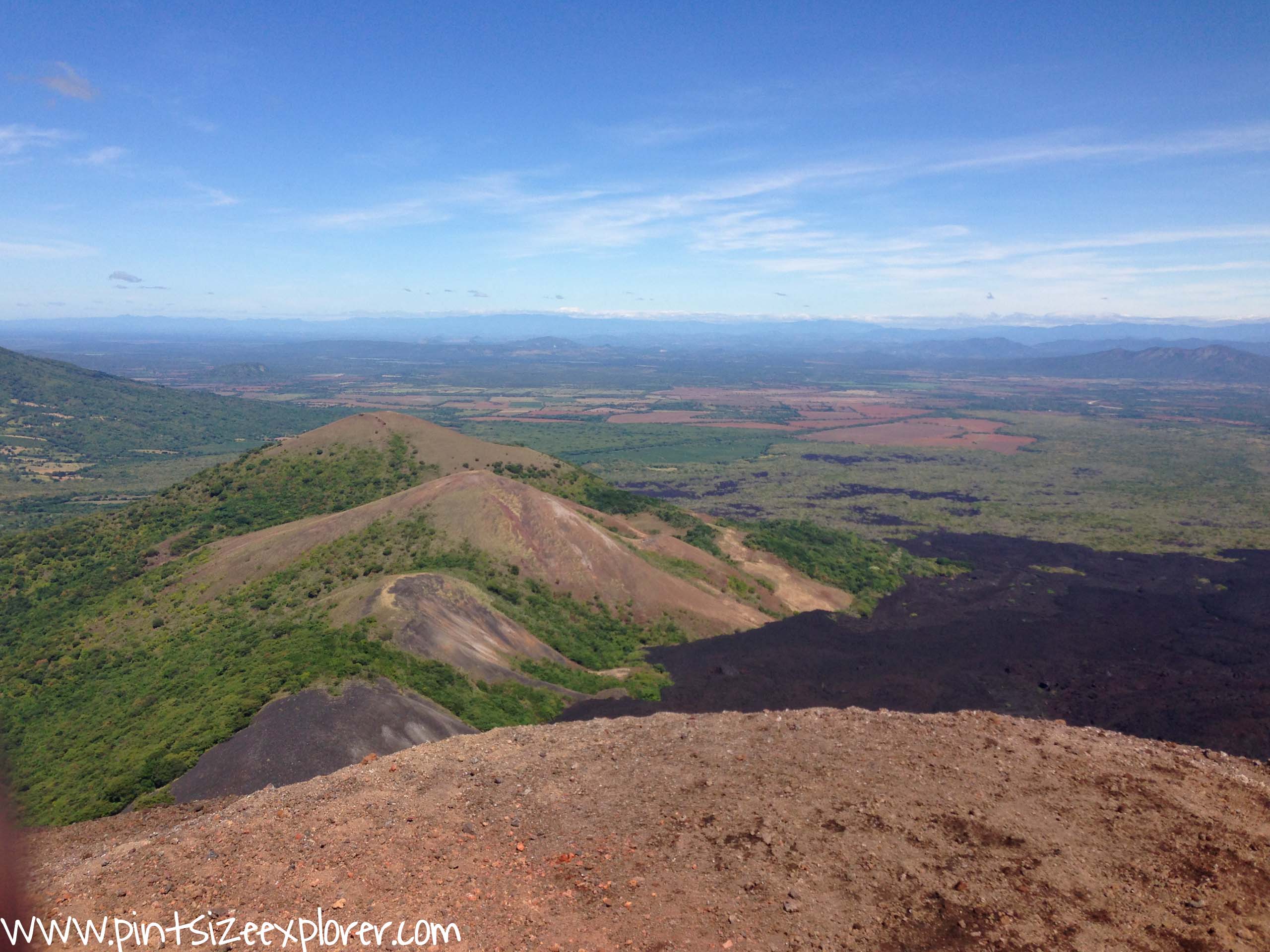 Good old Claudia accompanied me to a private clinic where a doctor doused my face with local anesthetic as he scrubbed my face clean. I was devastated to see that the doctor couldn’t clean out all the grit from my skin, and I had no choice but to let my skin heal and naturally push out that debris. The following week wasn’t fun at all. I developed two black eyes, one so dark that I was actually complimented on my purple eyeshadow – no joke! My mouth was covered in so many blisters that I couldn’t eat properly. I couldn’t expose my face to sunlight as there was a concern that the debris could permanently stain my skin, almost as a tattoo would. 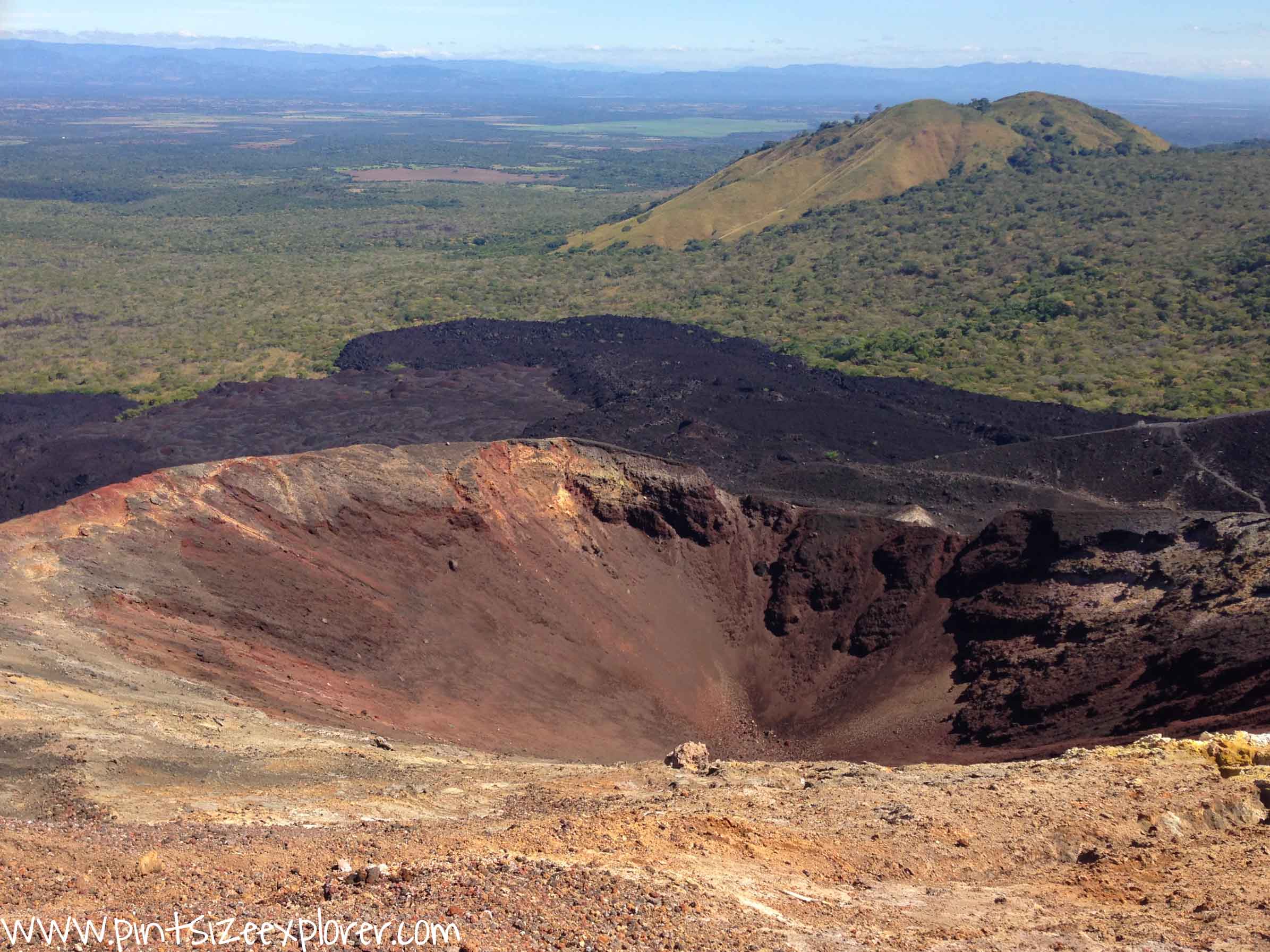 Most people were slightly battered and even Claudia (who Is a part time professional sky diver) threw herself off her board to avoid crashing. Accidents do happen and I was clearly VERY unlucky on this occasion, however it’s imperative to book any kind of adventure activity with a reputable company who will ensure you are safe from start to finish.

The local company running this trip offered me paracetamol and refused to take me back to the main hut as the rest of the group need to stop for a fruit break. Others from my group thankfully looked after me, but the stark reality was I could have broken my back for all they know. In fact, G-Adventures have since removed the Volcano Boarding from their suggested extra activity list, but of course if someone wants to do this, they can still book elsewhere.

I wasn’t going to add any photos of my messed up face, but as a friend pointed out, this is what actually happened. It really wasn’t a great experience for me, however I was lucky enough to have a great group of people around me to help me through the following week. If it wasn’t for them, I most certainly would have been on the next flight home.

If this trip is something you are considering doing, then make sure you prepare properly by wearing study shoes, not trainers. Wear tight layers to keep your skin covered, and prepare for the worst! What happened to me, won’t necessarily happen to you, but you never know! 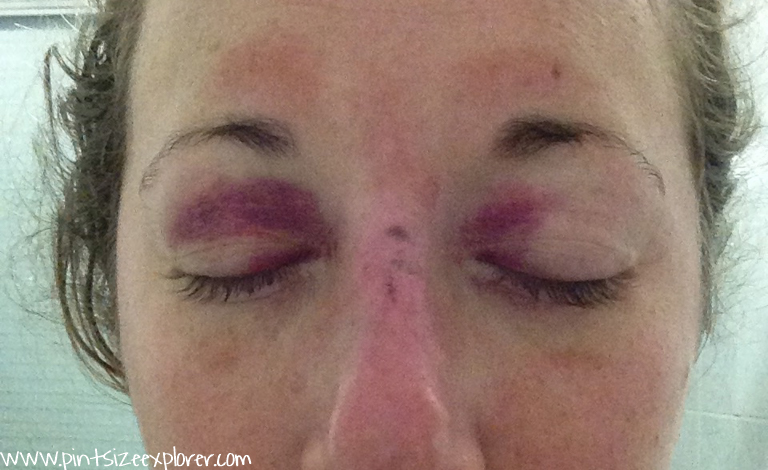 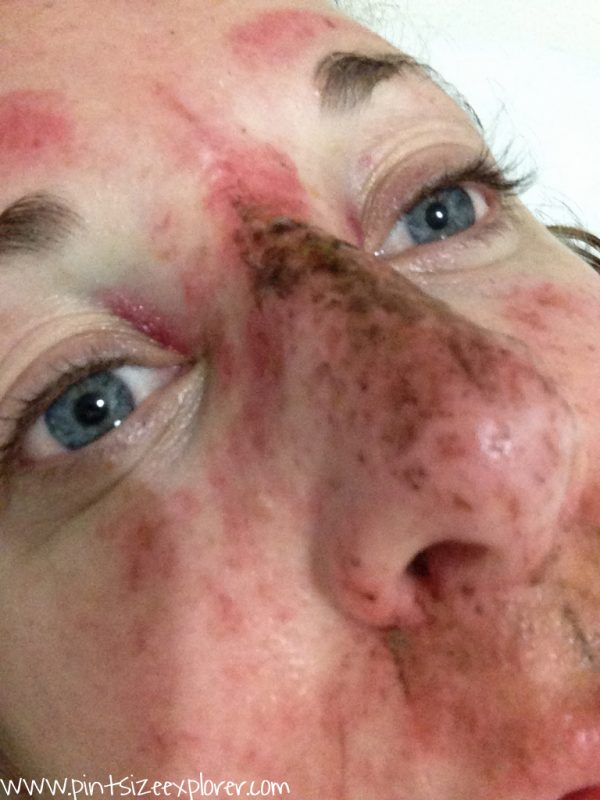 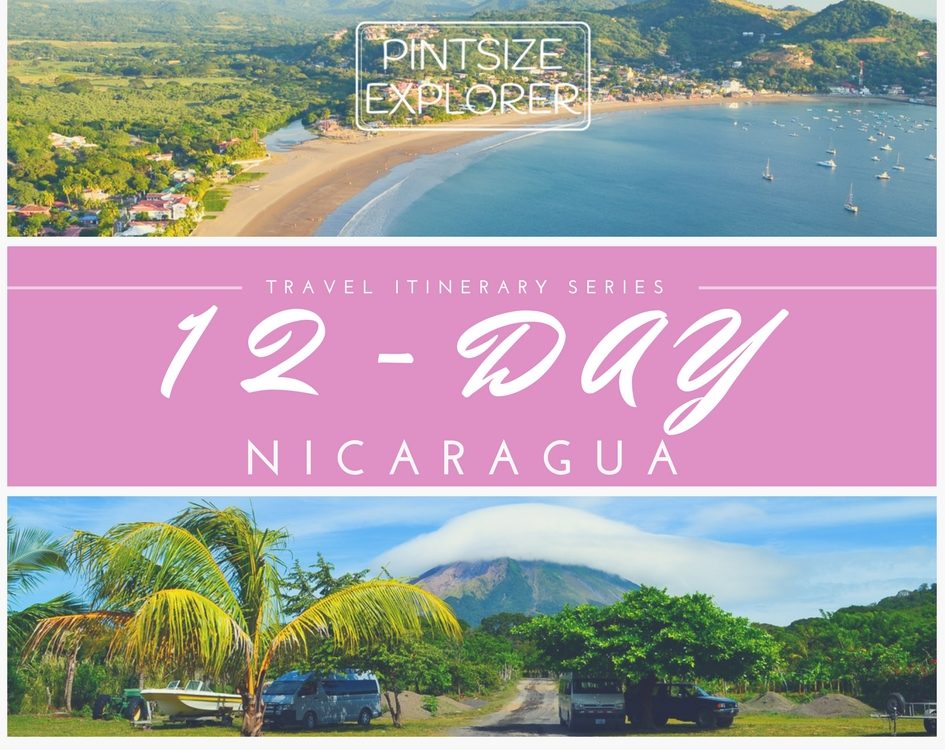 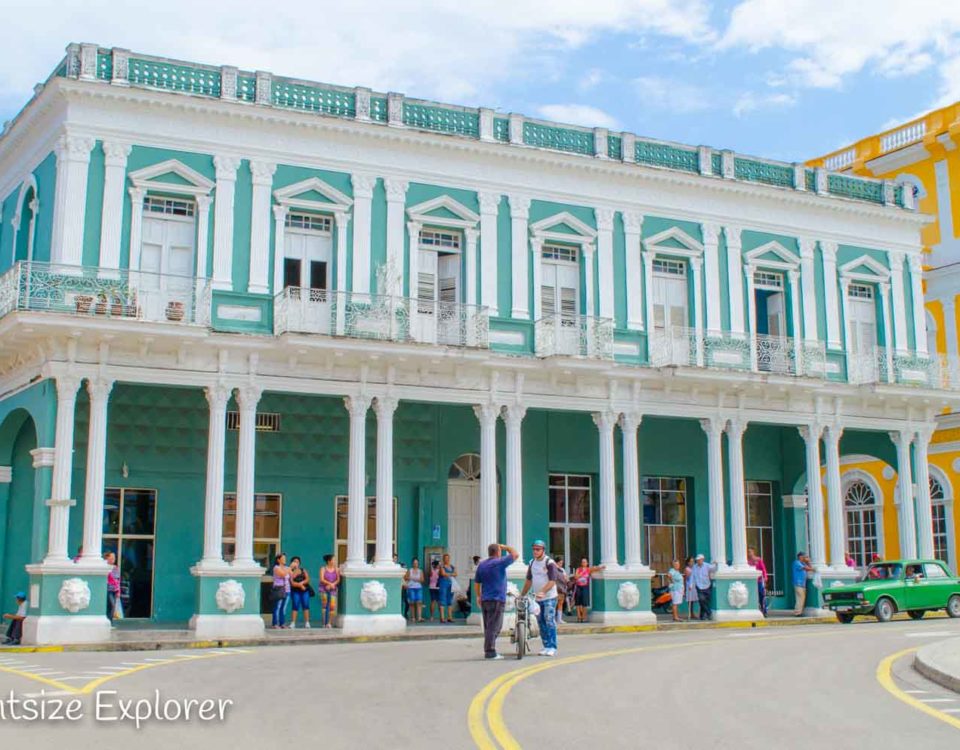