A Banquet At Toad Hall

Reaching The Summit Of Mount Snowdon

Wales has been on my bucket list for a while, so this bank holiday weekend we packed up the car and went on a road trip to Snowdonia National Park. With a huge choice of outdoorsy things to do, it’s difficult to know where to begin. From mountain biking to hiking, zip lining to sailing the lakes, and of course, climbing Mount Snowdon!

Towering high at an impressive 3560 ft (1085 m) tall, Mount Snowdon is the tallest mountain in England and Wales, and for some reason I casually suggested that we should go climb it. And so we did. 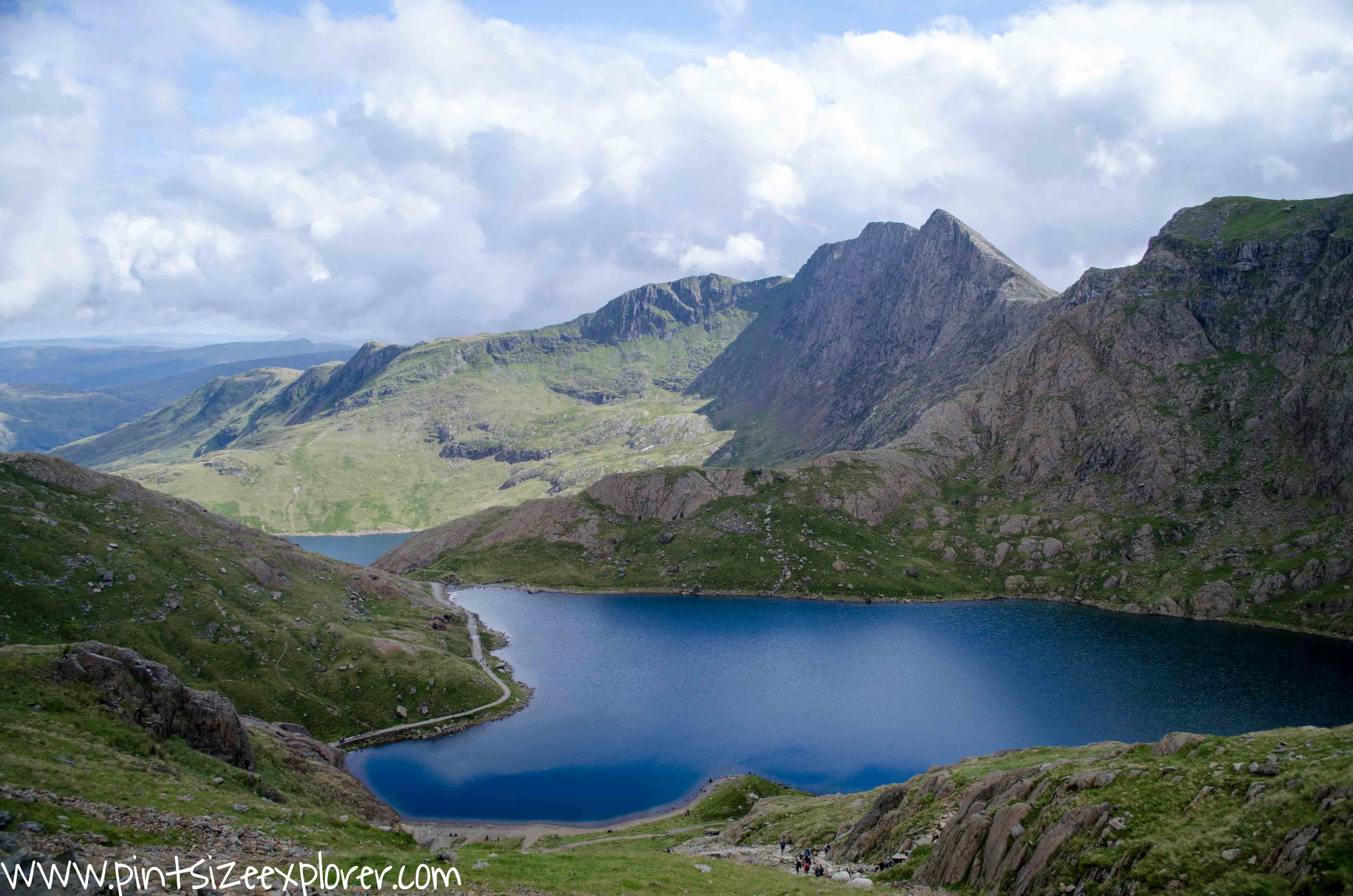 There are six main climbing routes to reach Snowdon’s summit, but for those who are unable to complete the walk, you can take the Snowdon Mountain Railway instead. These old steam trains take an hour to reach the summit, and come with a hefty price tag of £22 one way / £29 return, per person. 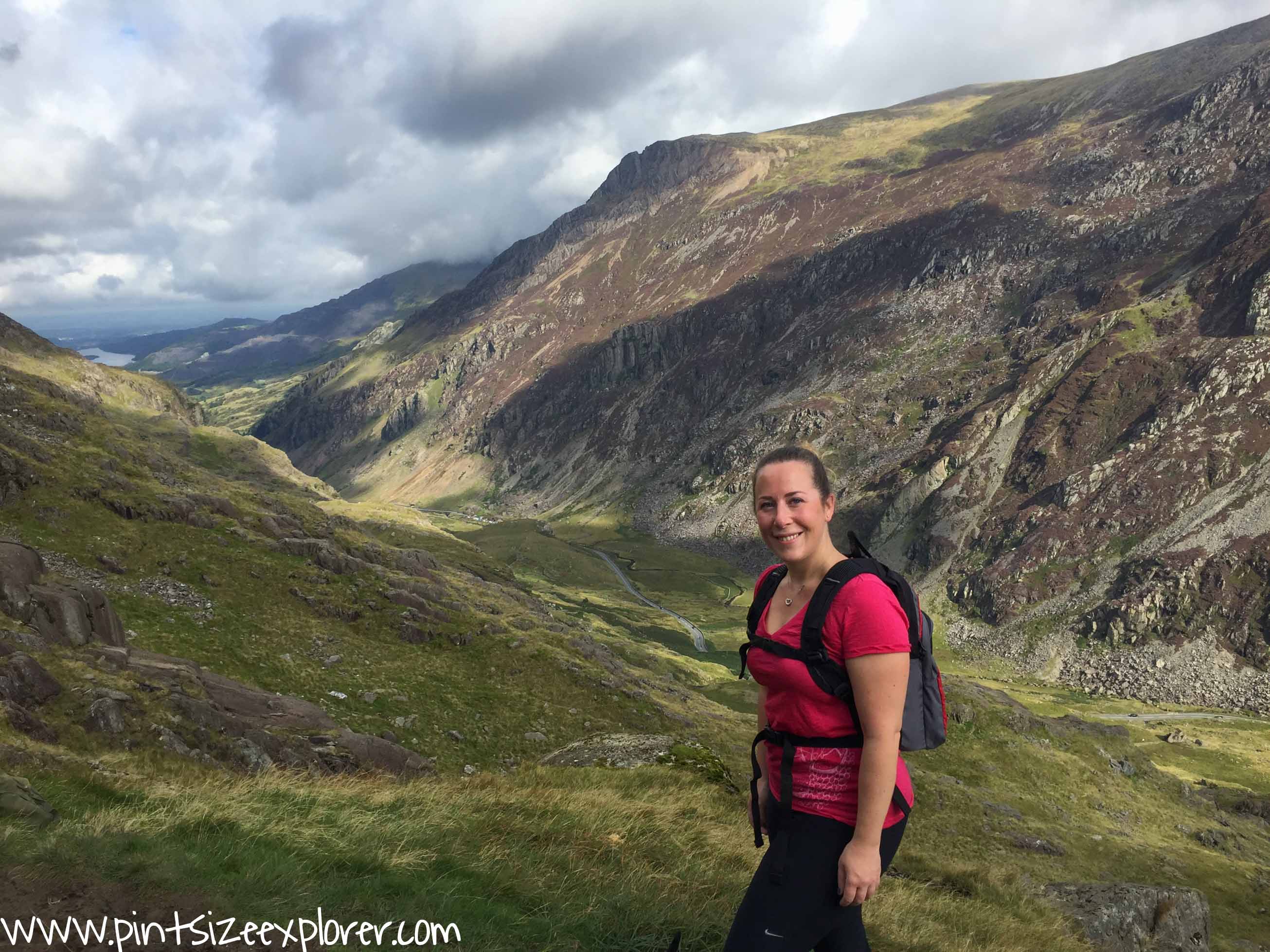 The Llanberis Path and the Ranger Path are the most popular routes to walk as they are the easiest way to reach the summit by foot. Llanberis is roughly 5 miles long and the busier of the tracks, whilst Ranger is roughly 4 miles long and a more scenic route of the two. If you want to follow an easier route then opt for the Ranger path!

The Rhyd Ddu path approaches the summit from the western side of the mountain. Although one of the easier tracks, be warned there is a ridge towards to the end of the route that whilst it is wide enough to walk along with no support, it does get pretty steep with a few surrounding sheer drops. 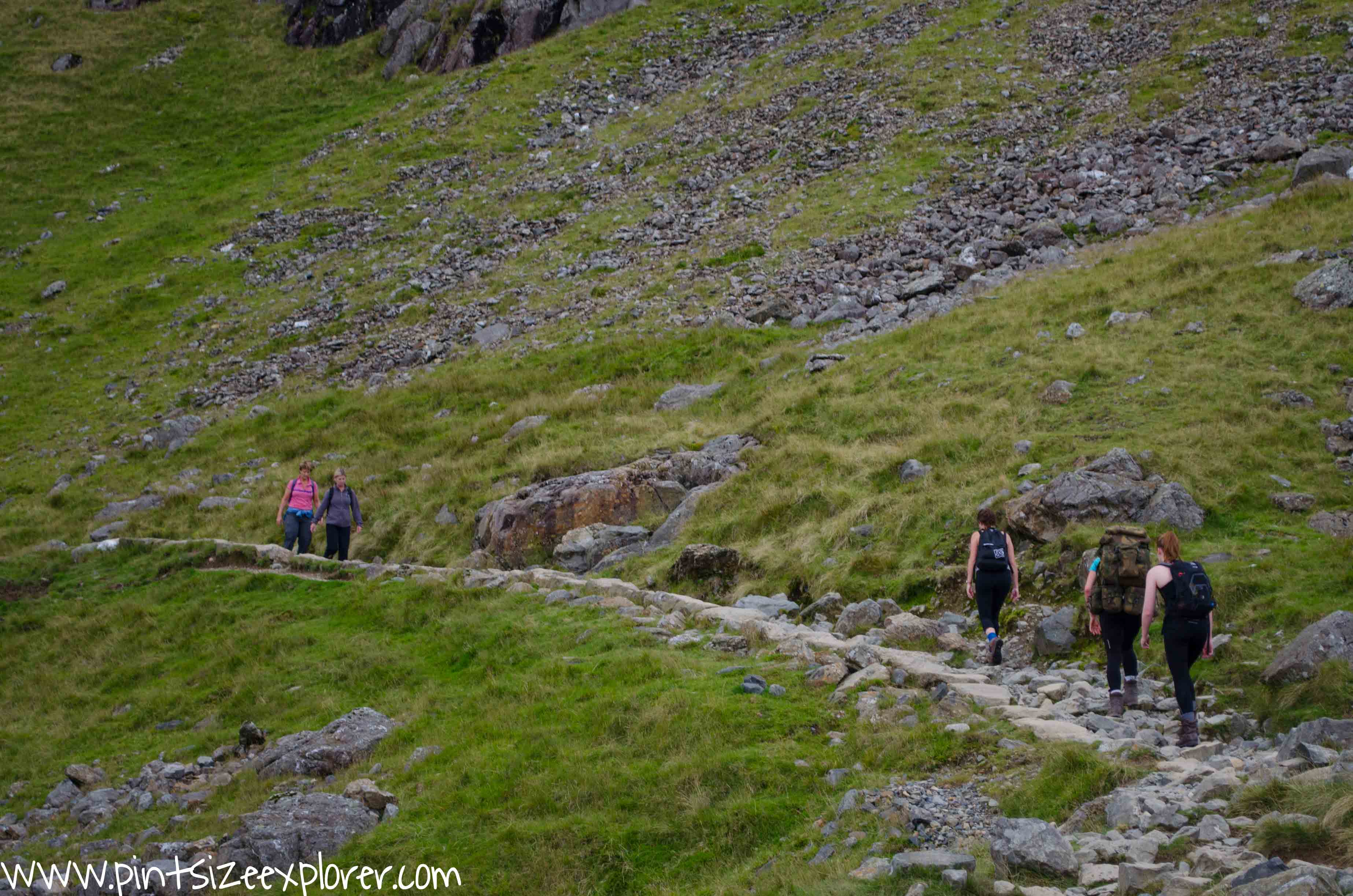 Next up is the Pyg Track and the Miners’ Track. Each path starts from a different side of the Pen-y-Pass car park, but then connect roughly half way along the track once you pass the Glaslyn Lake. The Pyg track has a steady climb at the start of the route, but then levels out until you pass the lake. The Miners’ track is pretty much a flat walk alongside the lake until the path merges with the Pyg track where you’ll have a steep climb and scramble up. From there, both tracks follow a good zig zag path with several scrambling sections until you reach the summit.

Anyone with a good level of walking fitness will be able to complete these routes, however these routes are also very popular as those who don’t wish to climb all the way to the summit can walk a circuit route along one track and back down the other. 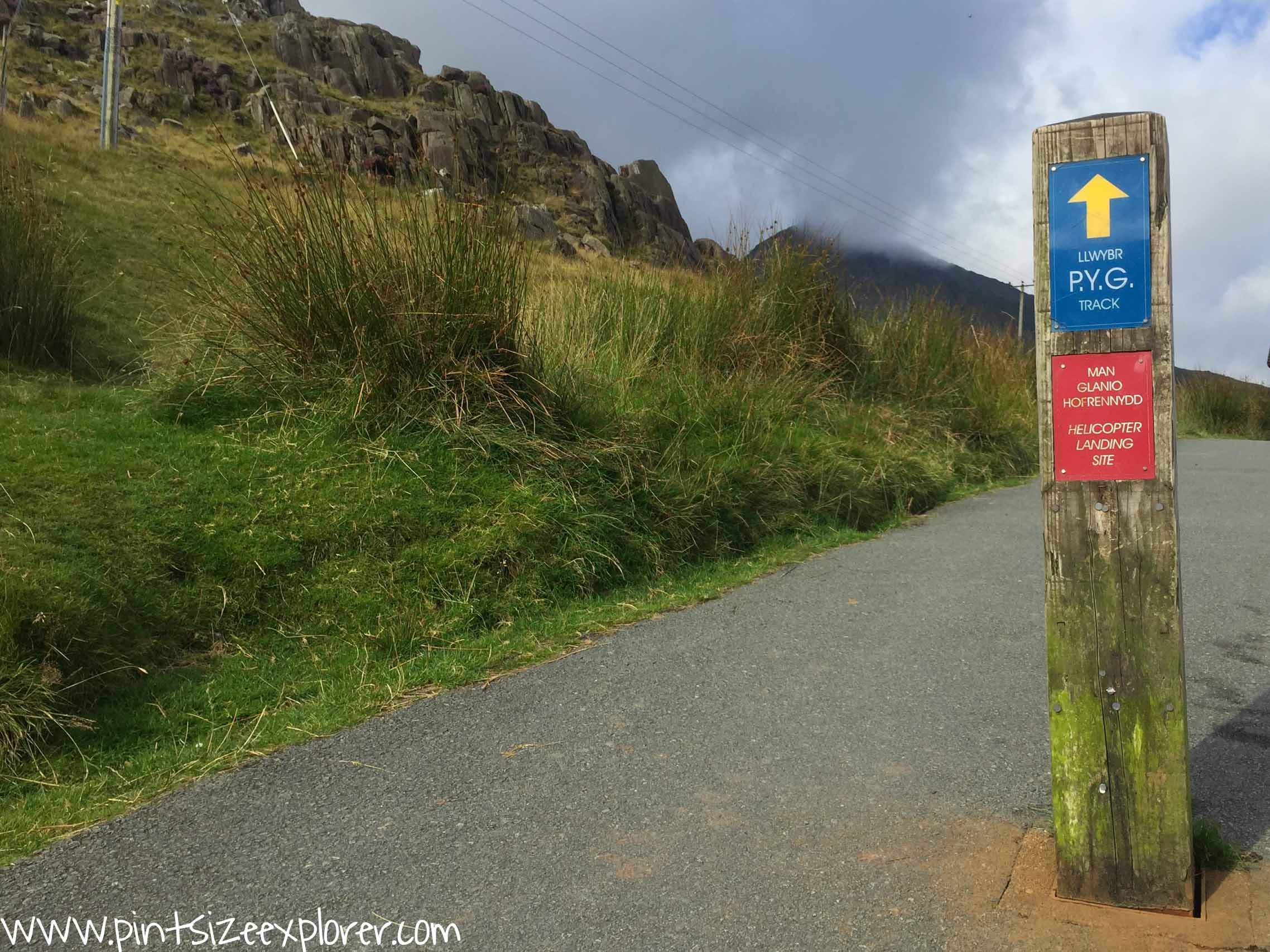 The Watkin Path is known as the hardest route to follow and should only be used by experienced climbers. The path has low visibility, has several sheer drops, and the terrain requires some careful footwork to ensure you don’t fall. 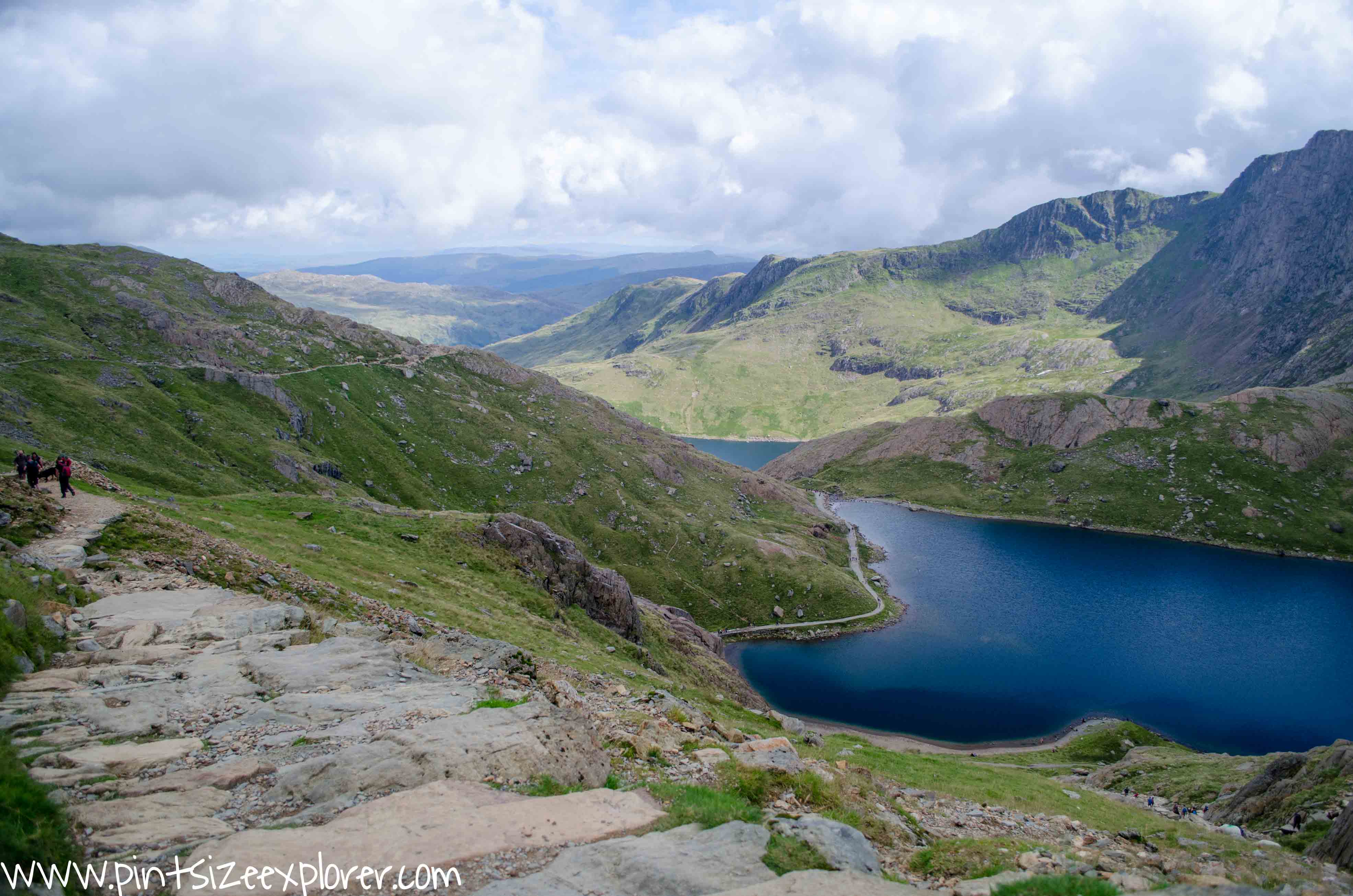 It’s difficult to predict how the weather will pan out, and you never know how cold it might get at the summit. Go prepared and pack some layers and a waterproof just in case. Pack some lunch or snacks, plenty of liquids, sun cream if it’s hot, your camera, and make sure you pee before you set off as there are no toilets en-route!

There is a cafe at the summit but expect long lines and overpriced pastries. Handy for a hot drink and bite to eat on a cold day though! There are some public toilets here too, along with a souvenir shop. 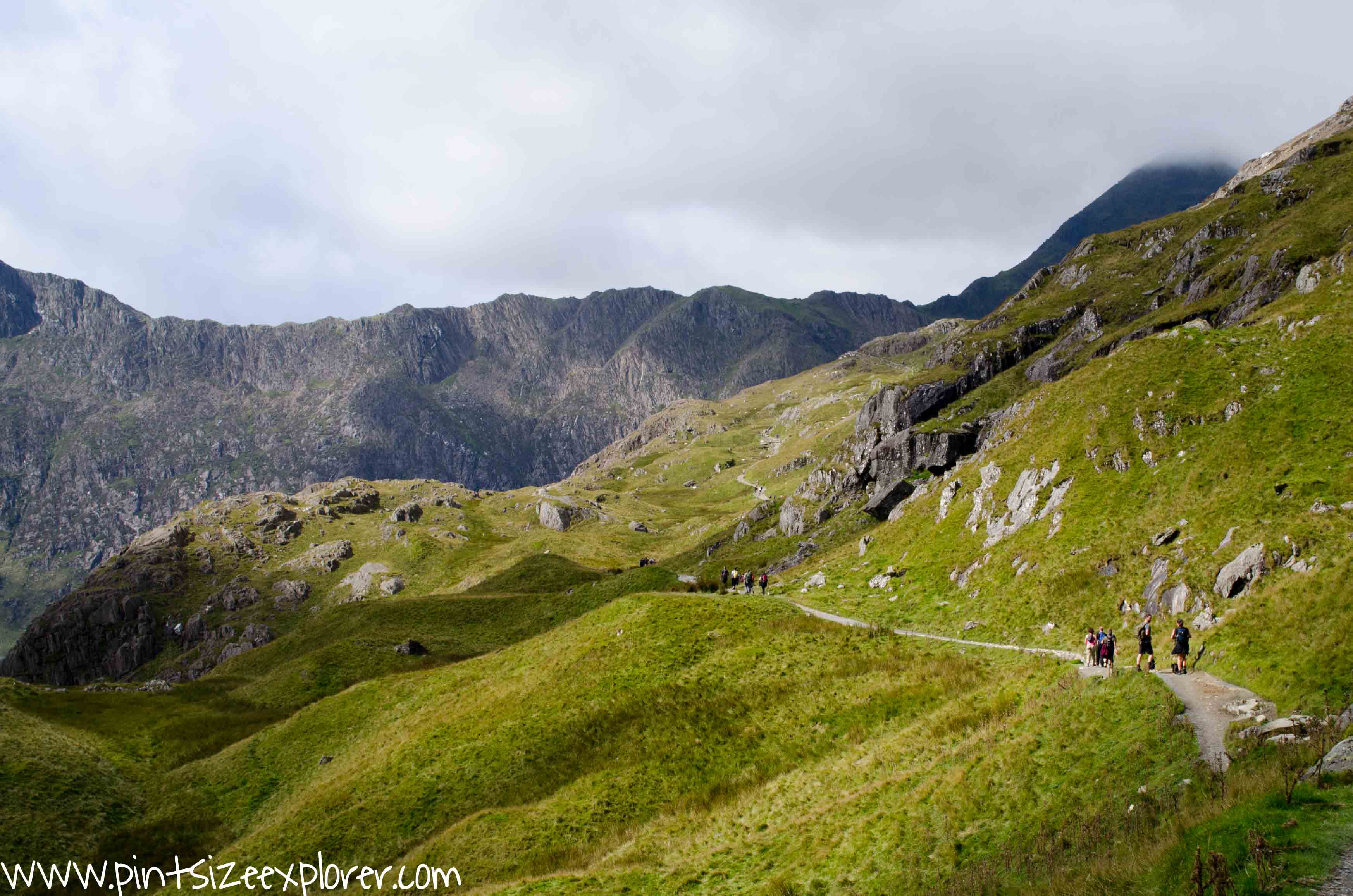 We planned to hike up the Pyg Track and hike back down along the Minors’ Track so we could get a better view of the mountains from a lower level. We headed off at 09:00 on the hourly S2 Sherpa Bus (£1.50 each way) which departed outside Betws-y-Coed train station. The bus took roughly 20 minutes and stopped inside the Pen-y-Pass car park. You’ll need to arrive super early to find a spot in the car park (£5 up to 4 hrs / £10 over 4 hrs), so I would recommend getting the bus! 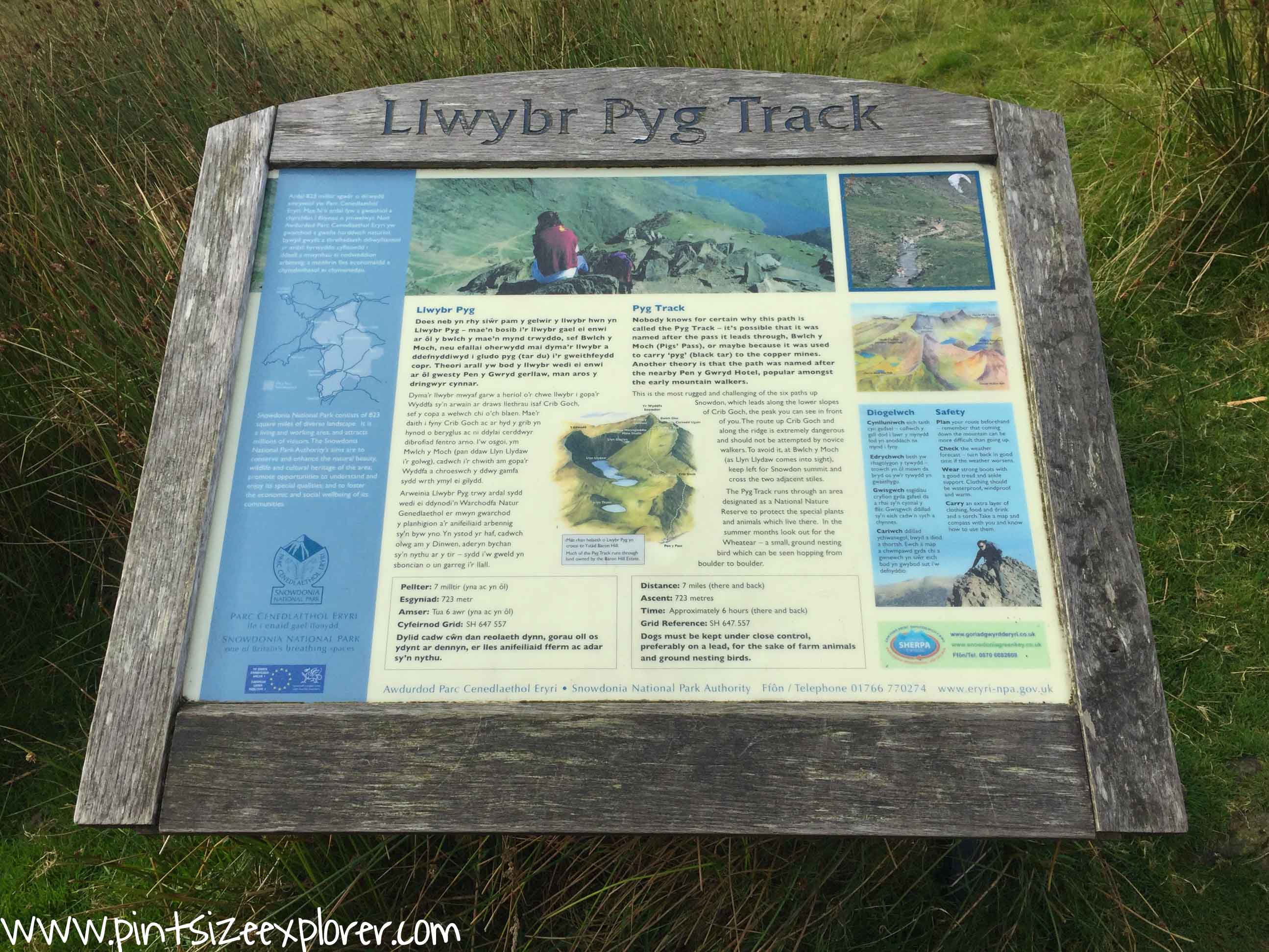 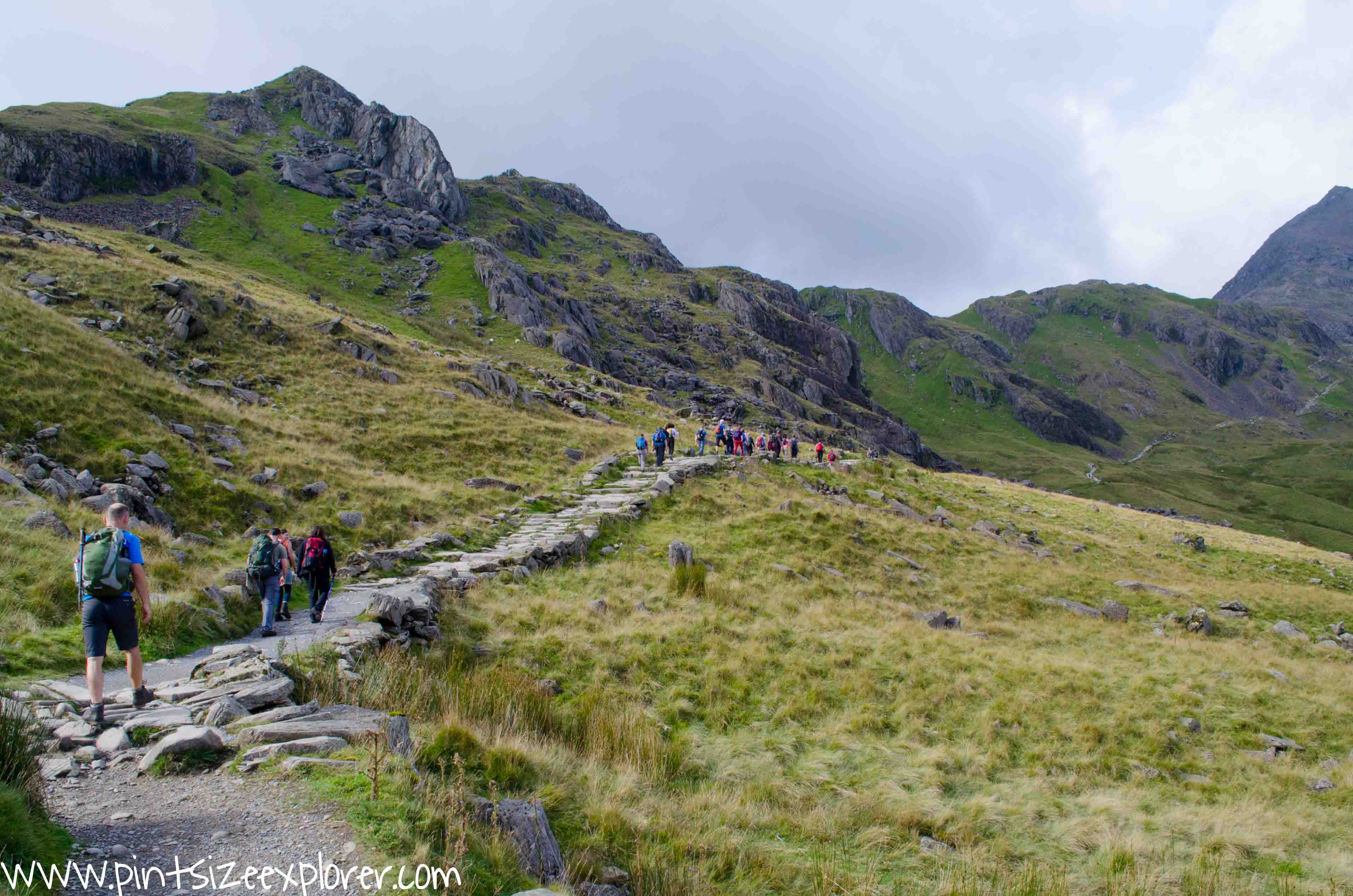 It was quite busy as we set off, but thankfully the crowds dispersed relatively quickly once everyone found their own walking pace. The first section of the Pyg track had a steady climb up a number of steps. There were a handful of boulders along the way, and we did need one or two brief stops to catch our breath. 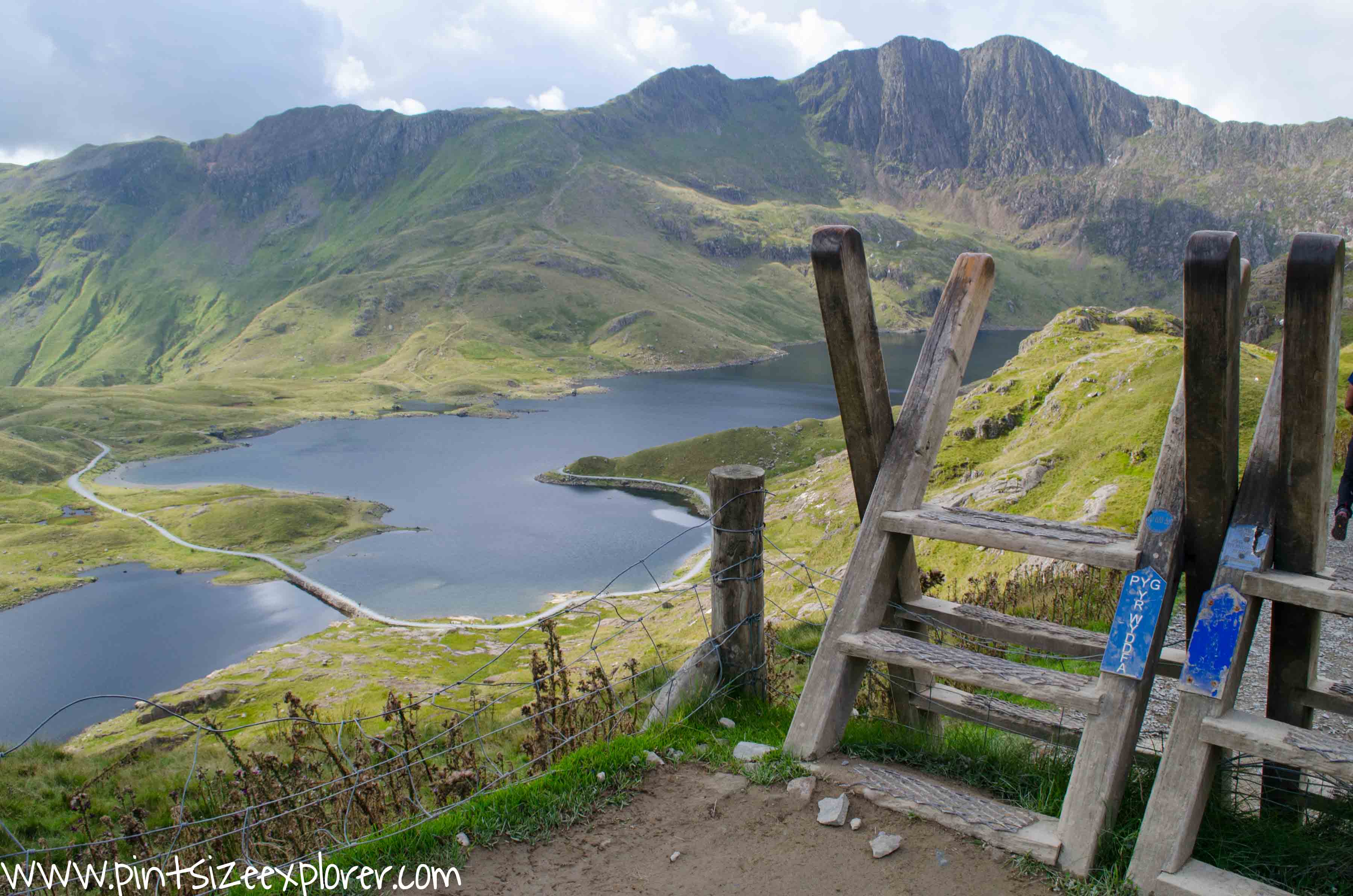 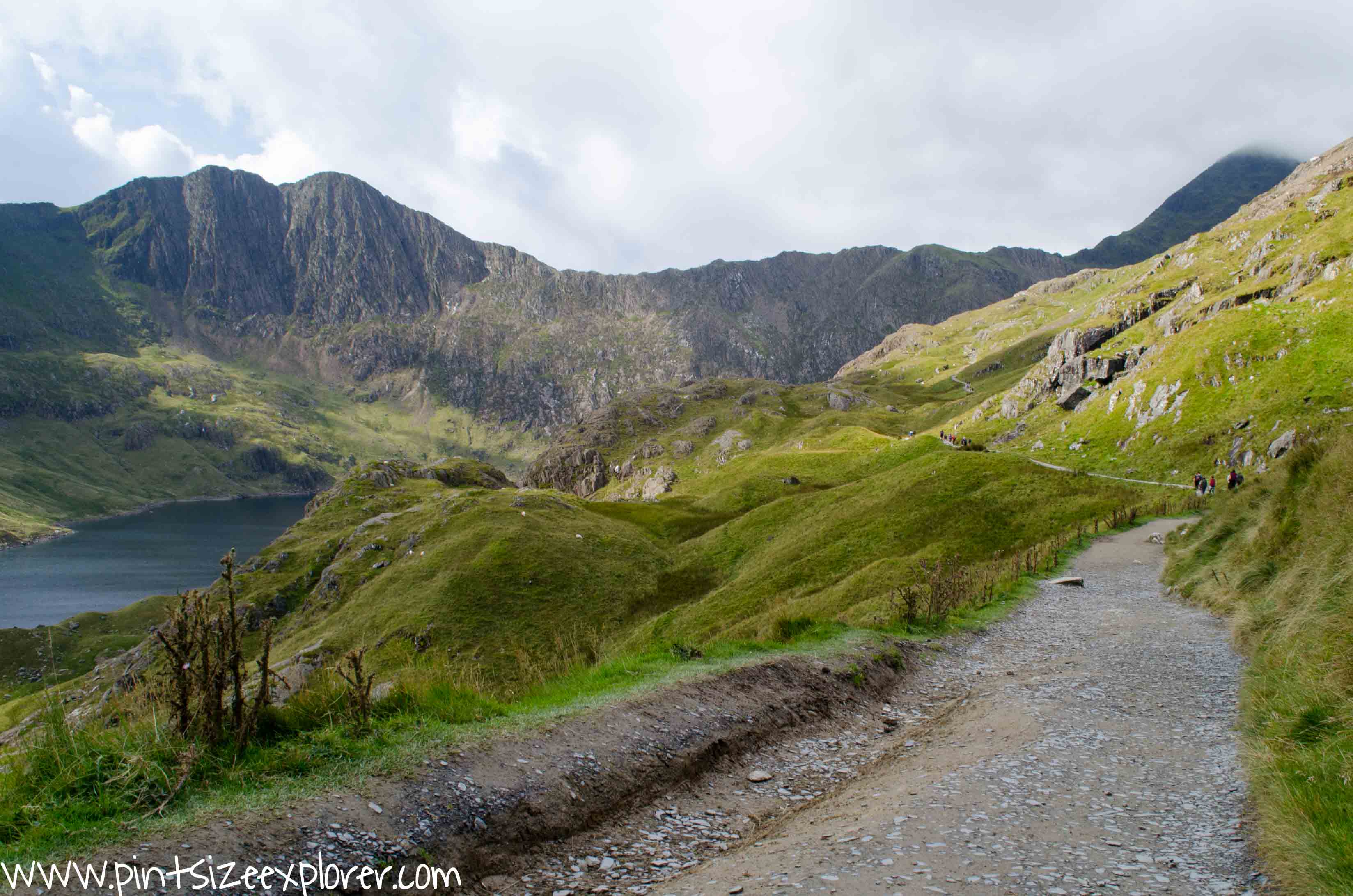 Once past that first section and over the stile, the track flattened out nicely making for a comfortable walk with some killer views over the Glaslyn Lake. From here you can see the Miner’s track that crosses over the Lake and continues along the water edge. Although we weren’t that high at this point, the scenery was stunning as we looked up at the surrounding mountains. 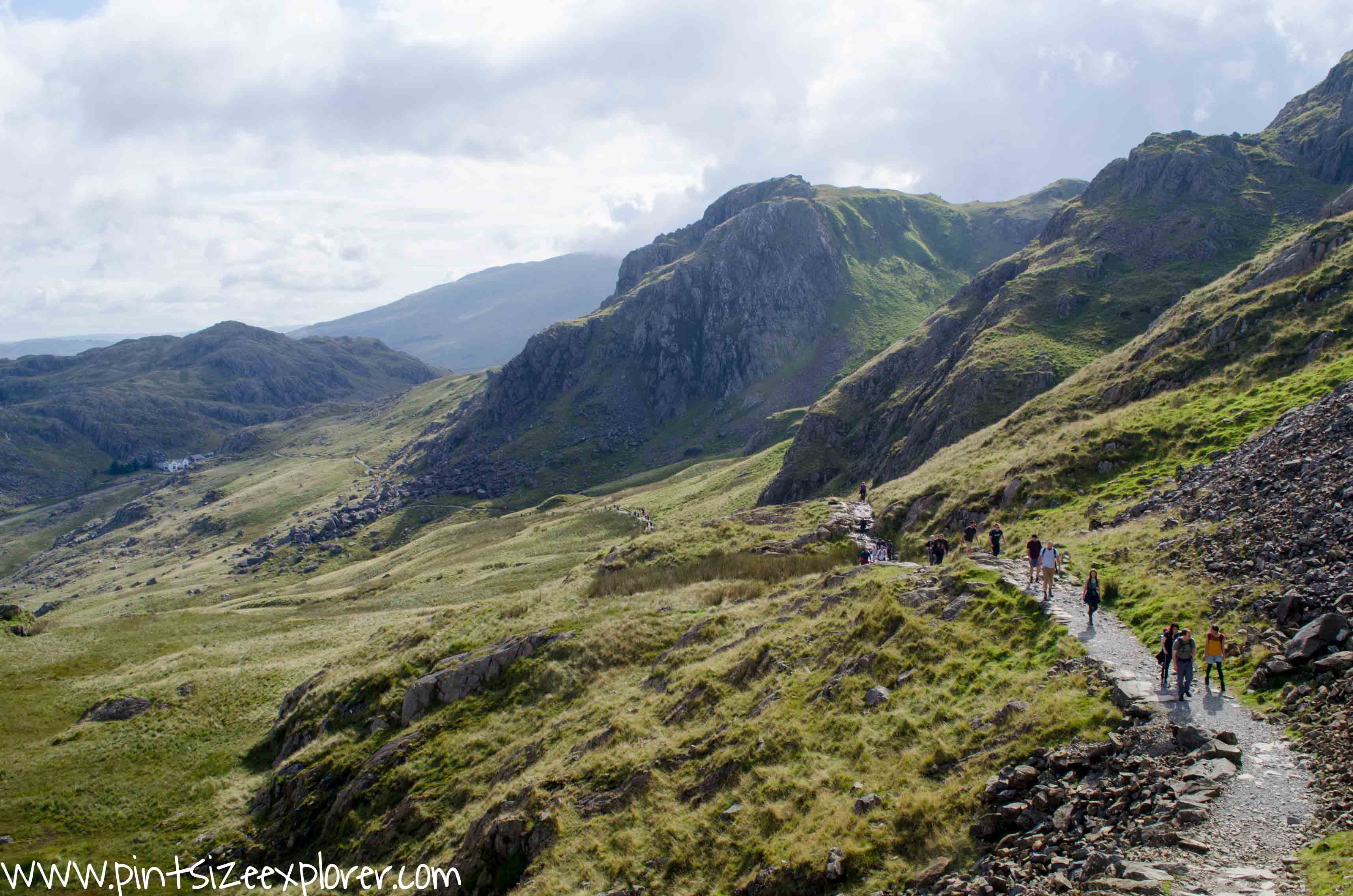 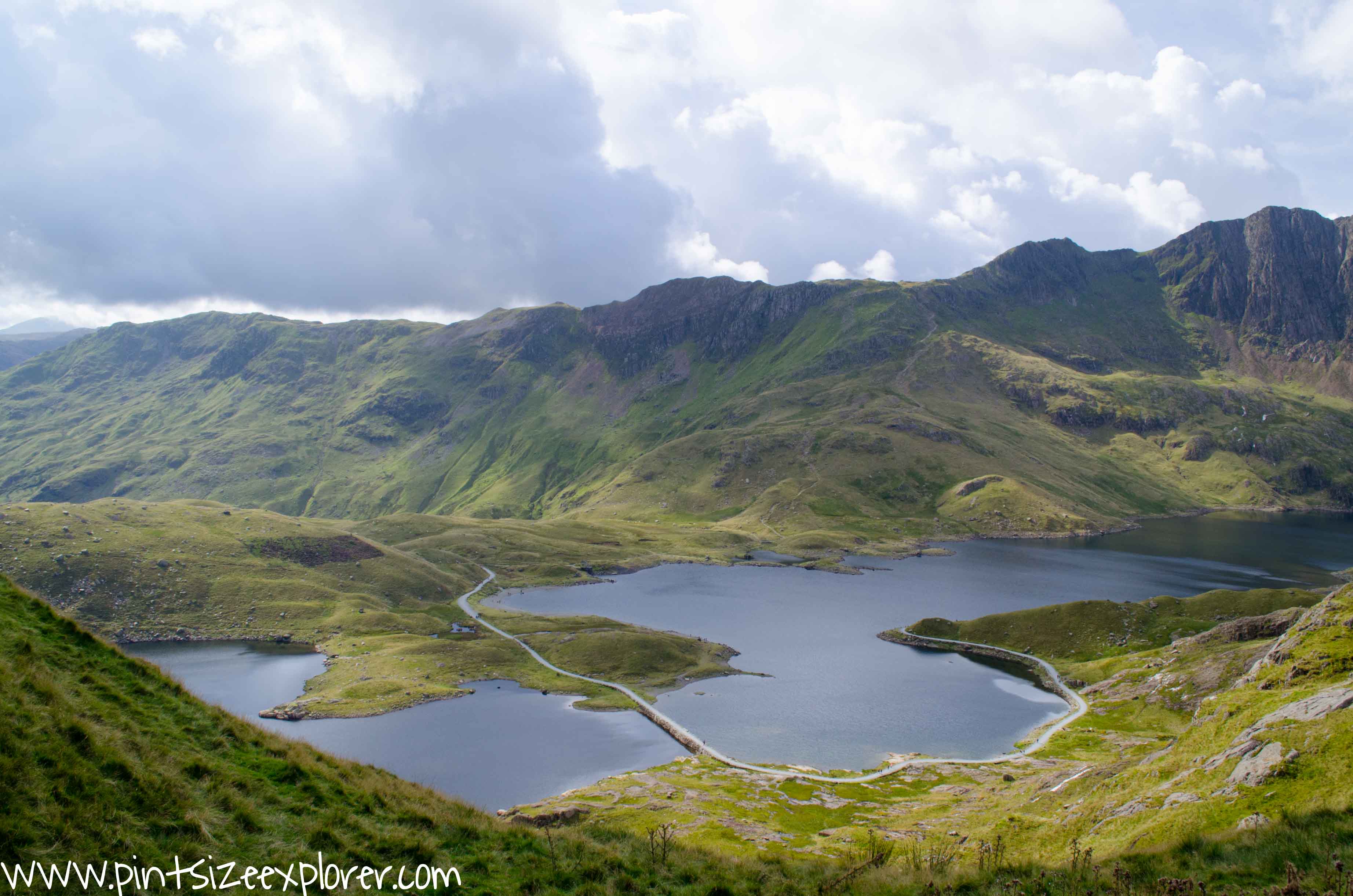 The further we walked along the path, the more I noticed how the terrain began to change from easy to navigate, to a full on rocky pathway with plenty of scambling required. We continued to climb, aware that the clouds were getting more visible the more altitude we gained. 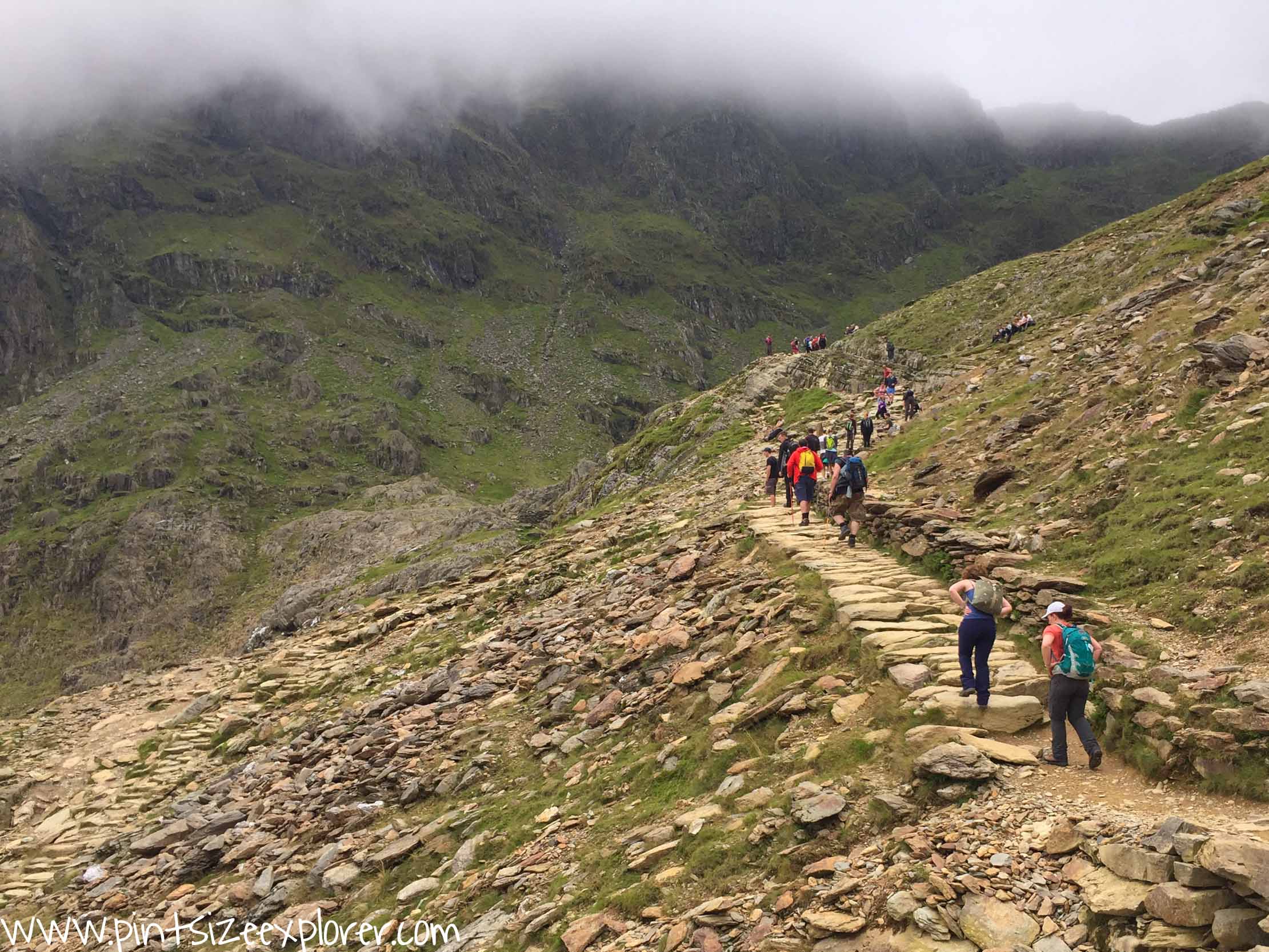 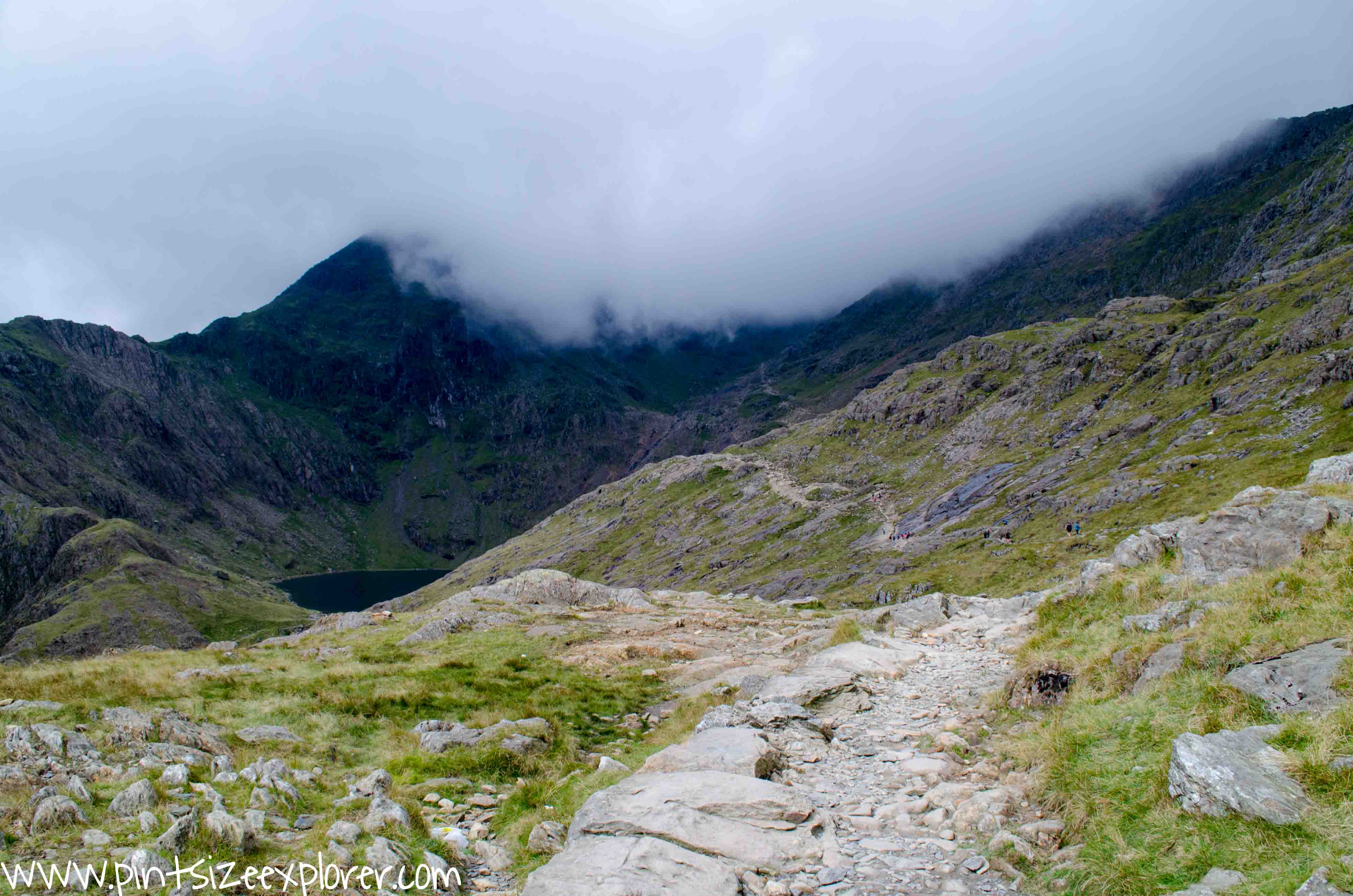 With the Glaslyn Lake now behind us, our path merged with the Miners’ track as both routes followed the last section together. This part was definitely the toughest as we zig zagged our way even higher, and across several sections that required the use of both hands as we scrambled our way up. 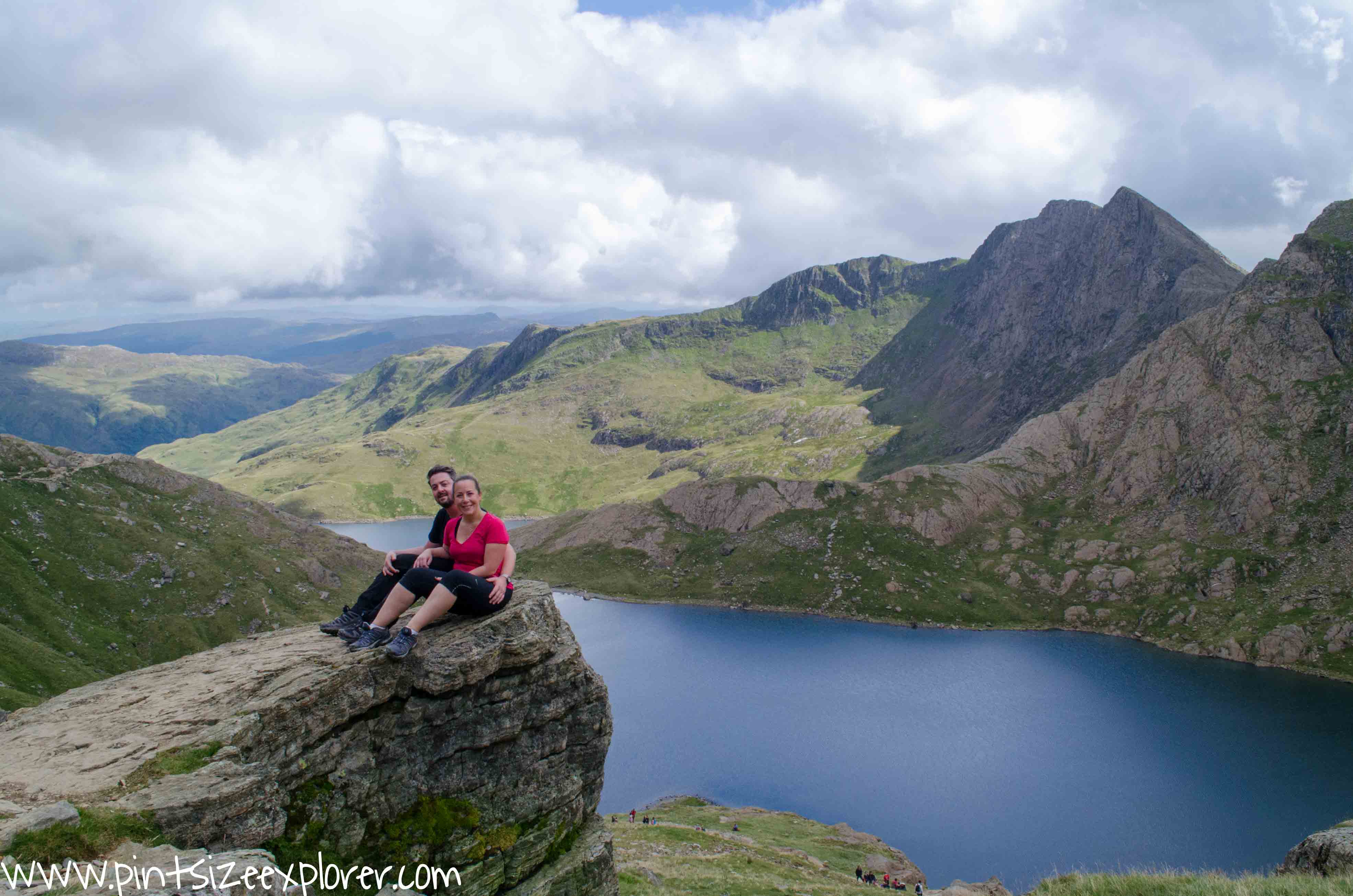 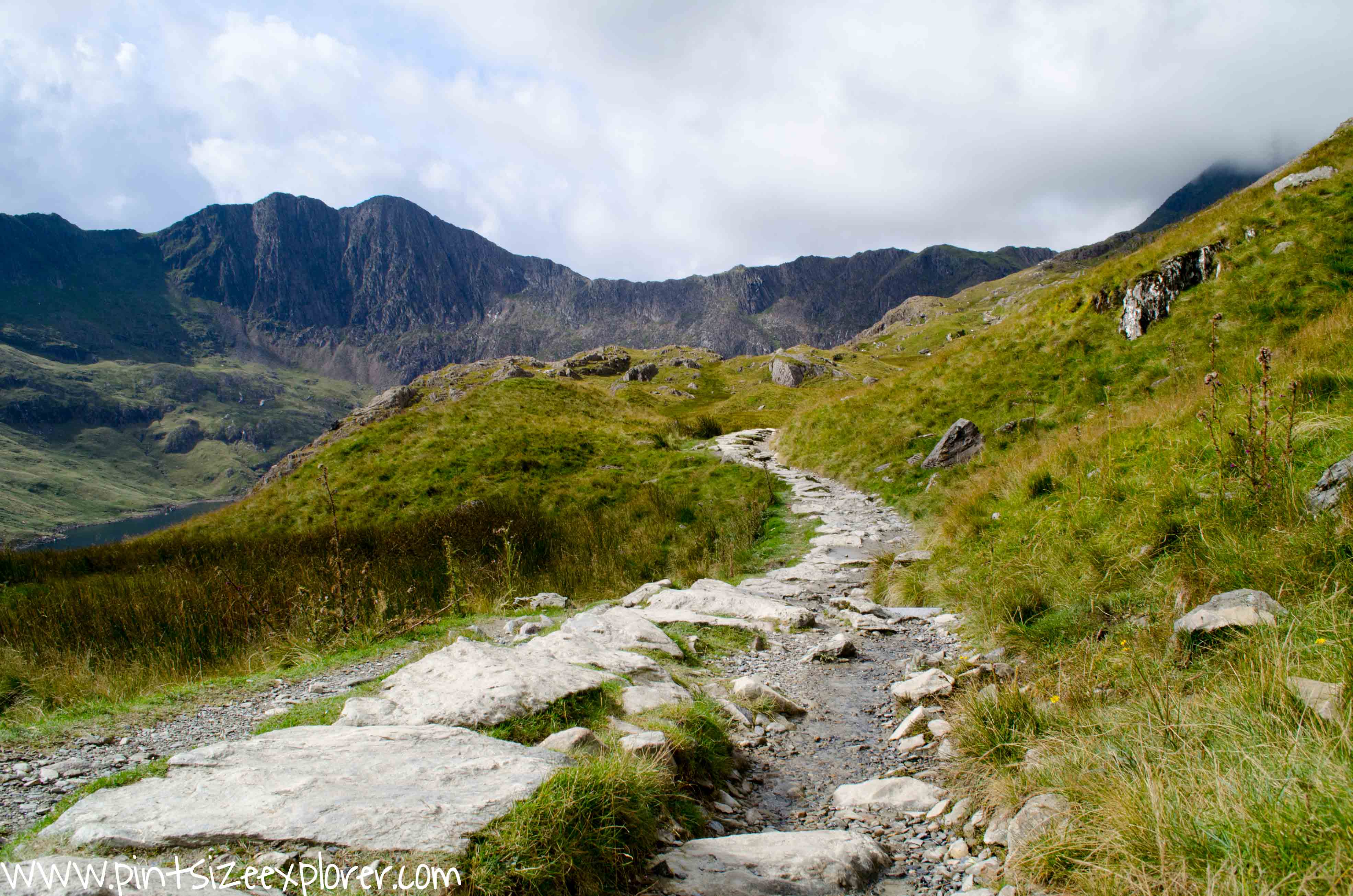 Keep an eye out for the Penny Post during this section! I’m not too sure what the tradition is with this, but for the last five years, passers-by have pushed coins into the post. 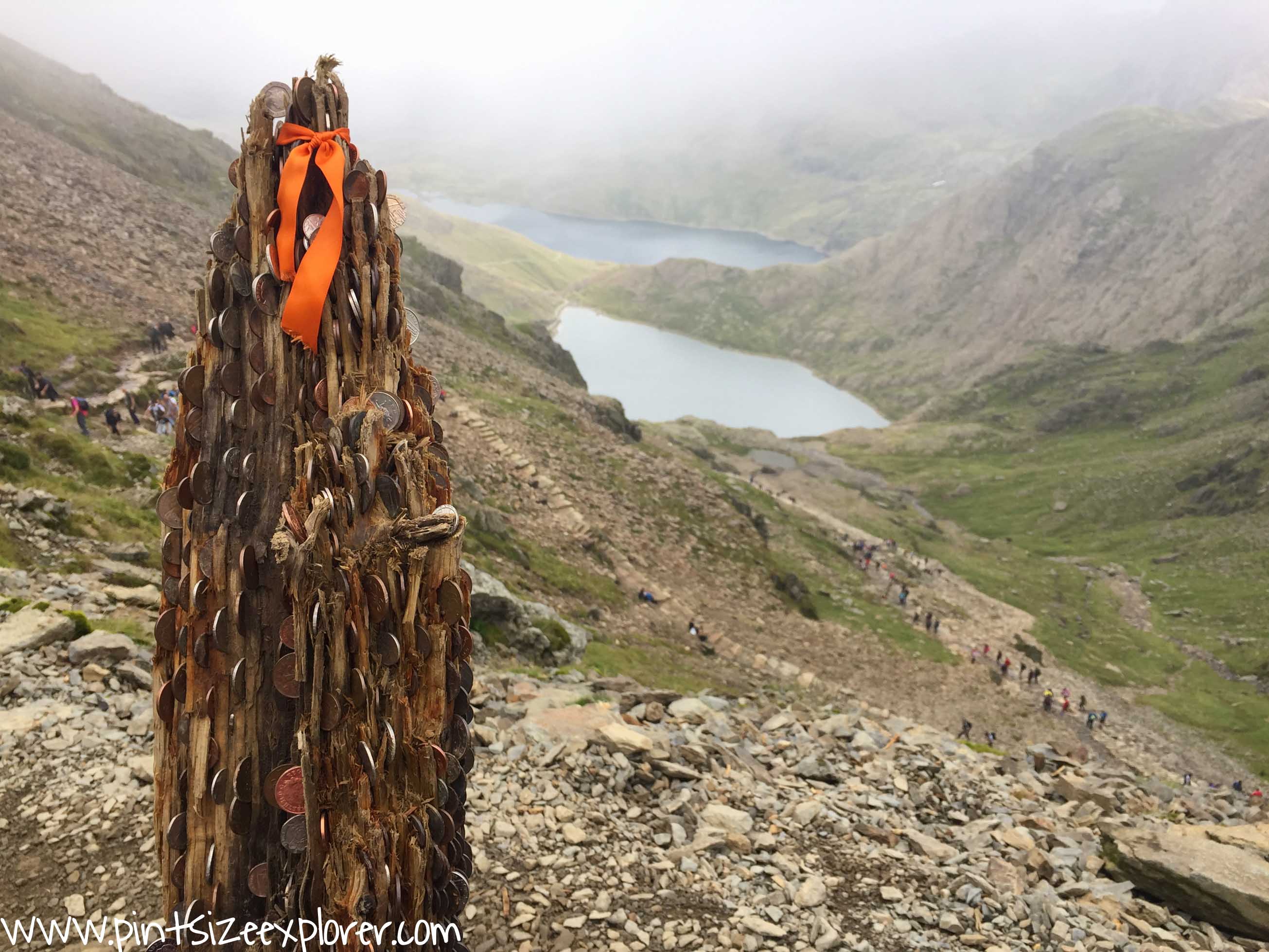 We made it to the top of the last section, where you begin to get your first real glimpse of just how high you’ve climbed! Up within the clouds, there’s one last section to follow alongside the train tracks to reach the summit. And that was it, we’d made it!!!

This view says it all. Simply incredible. We were extremely lucky with the weather being so clear up at the summit for us to capture these stunning photos, and it made every moment worth while! 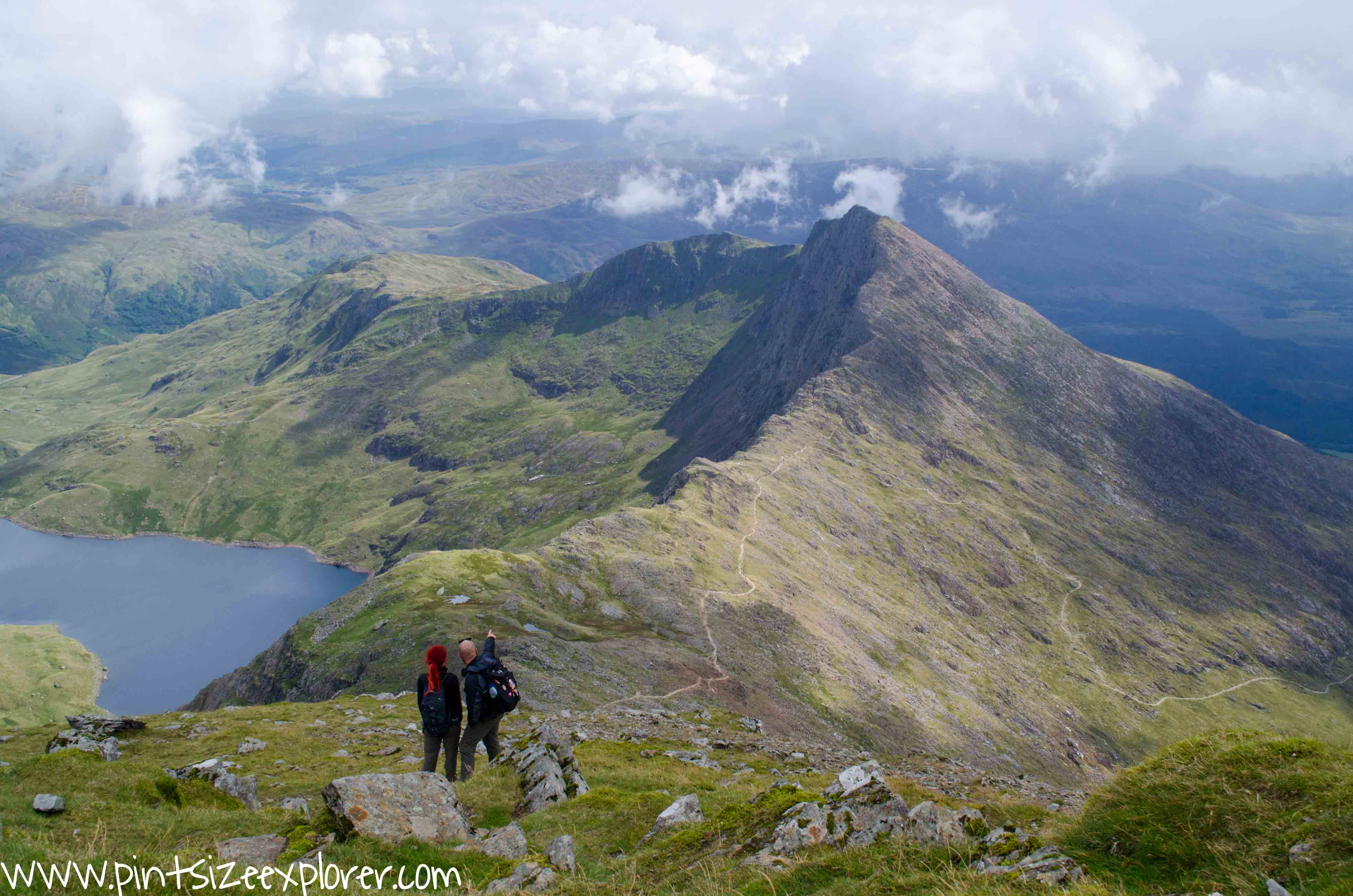 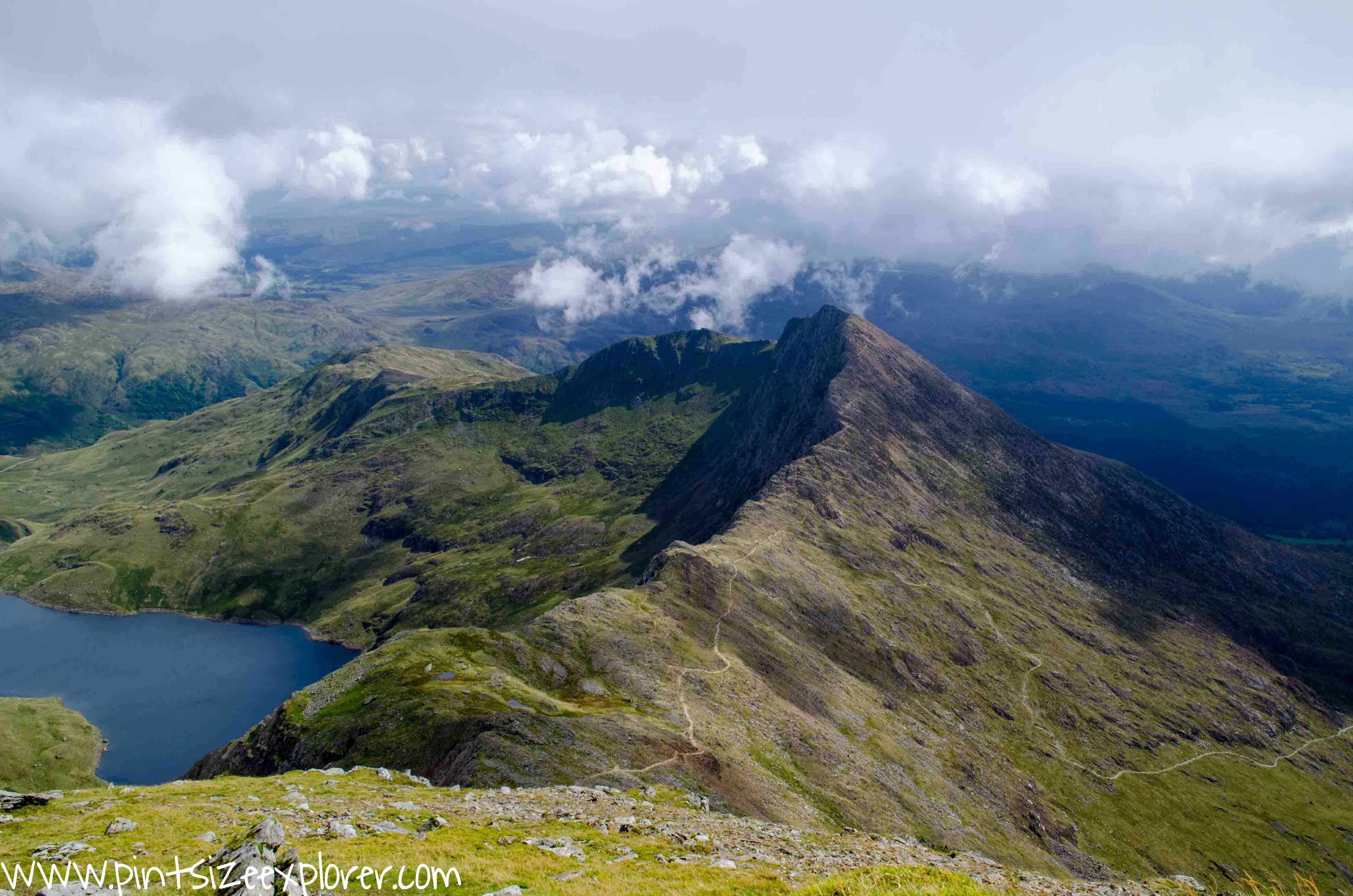 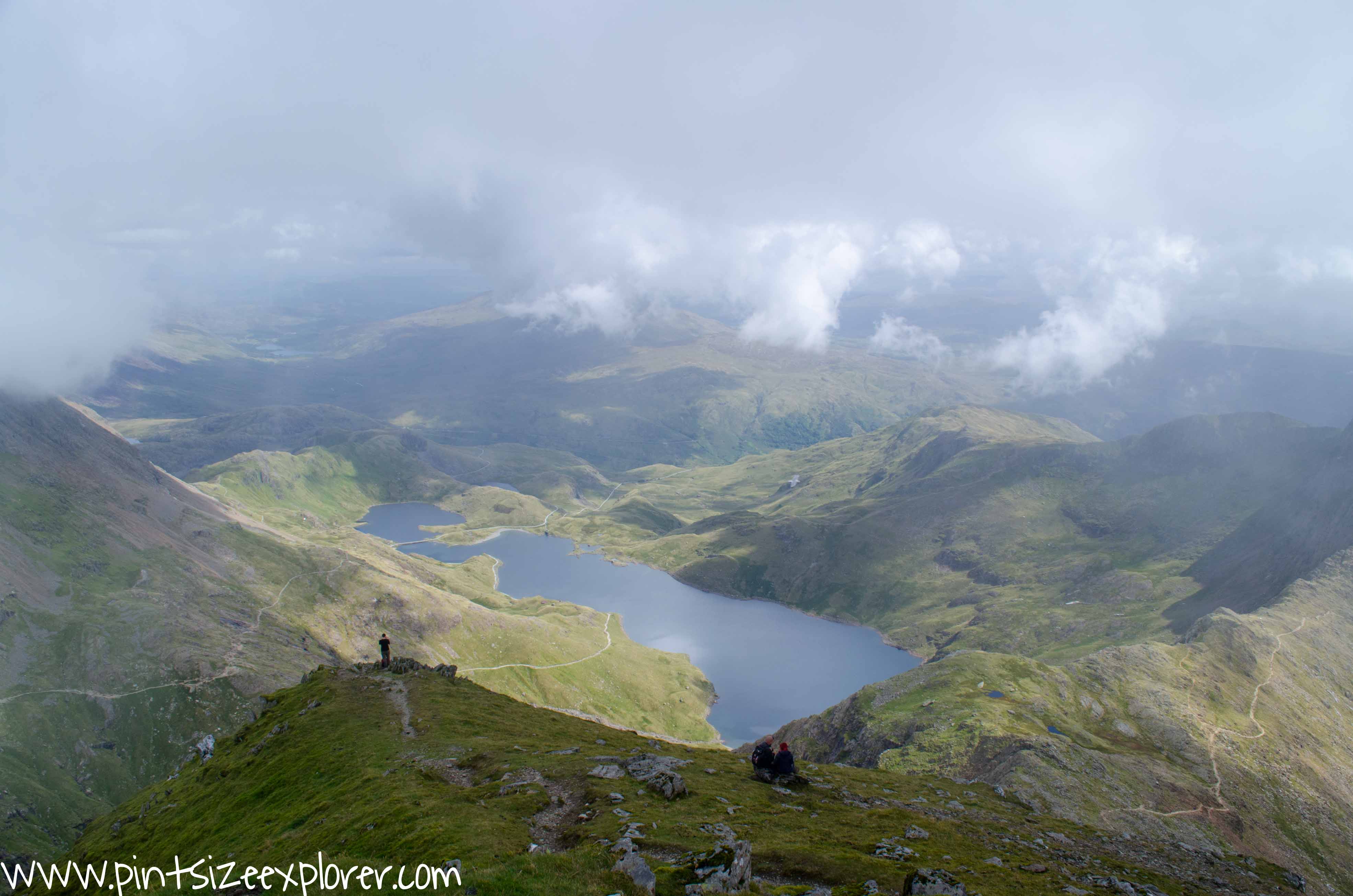 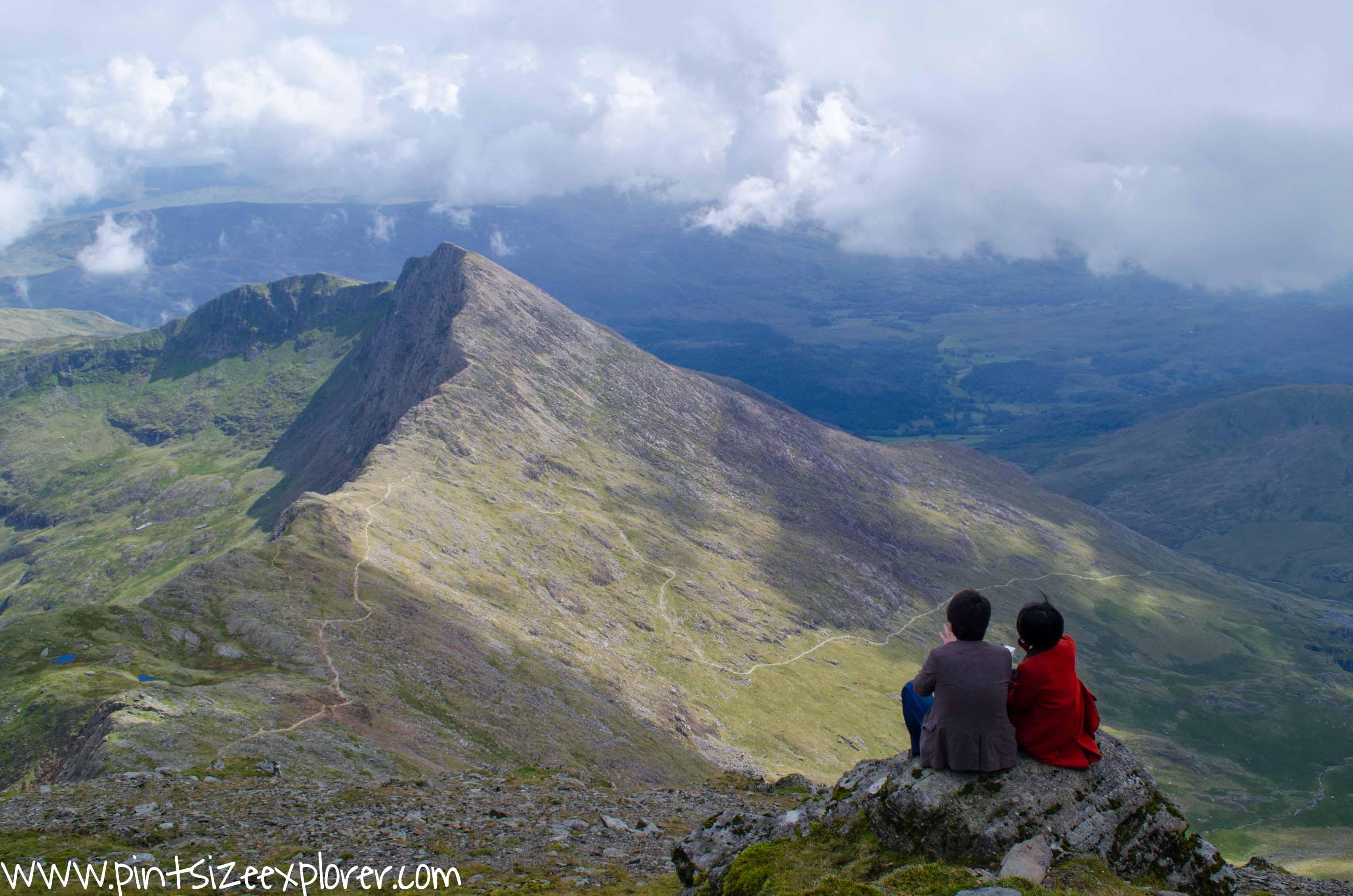 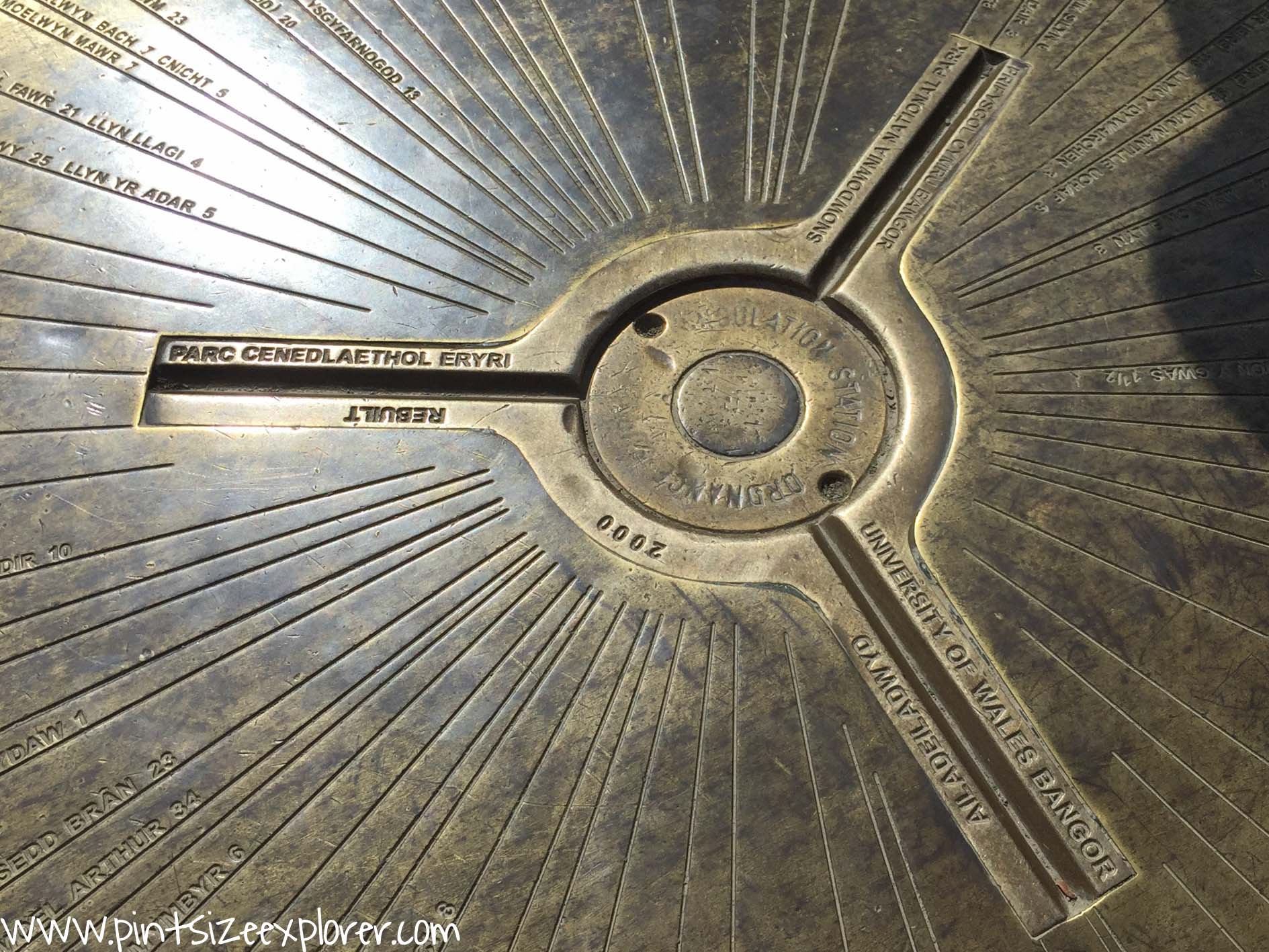 Now for the descent. As I mentioned earlier, we did plan to take the Miners’ Track down so we could enjoy the view from below, and also enjoy the easier walking route back to the bus stop!! We must have been concentrating a little too hard on getting down, as we completely missed the section where the paths divide into the Pyg Track and the Minors’ Track, so we accidentally ended up going back via the Pyg Track.

What a day out. It’s not often I get to high five myself for climbing a mountain! Just a shame my little legs had to ache for the next few days!