Following on from a few other posts I’ve written about my trip to Tanzania and Kenya, I thought I’d go into a little more detail about our 72 hours in Masai Mara to give you a better idea of what our safari experience was really like!

It had already been a long 5-hour drive from Lake Naivasha, including two hours of driving off road on an extremely bumpy dirt track, but our guide kindly offered to take a detour to our hotel and take us on an impromptu game drive. As soon as we entered the park we spotted our first animal – a warthog!! Our guide was quick to shout that this was Pumba, referring to everyone’s favourite Disney film The Lion King of course! From this point on, all warthogs were only referred to as Pumba’s. 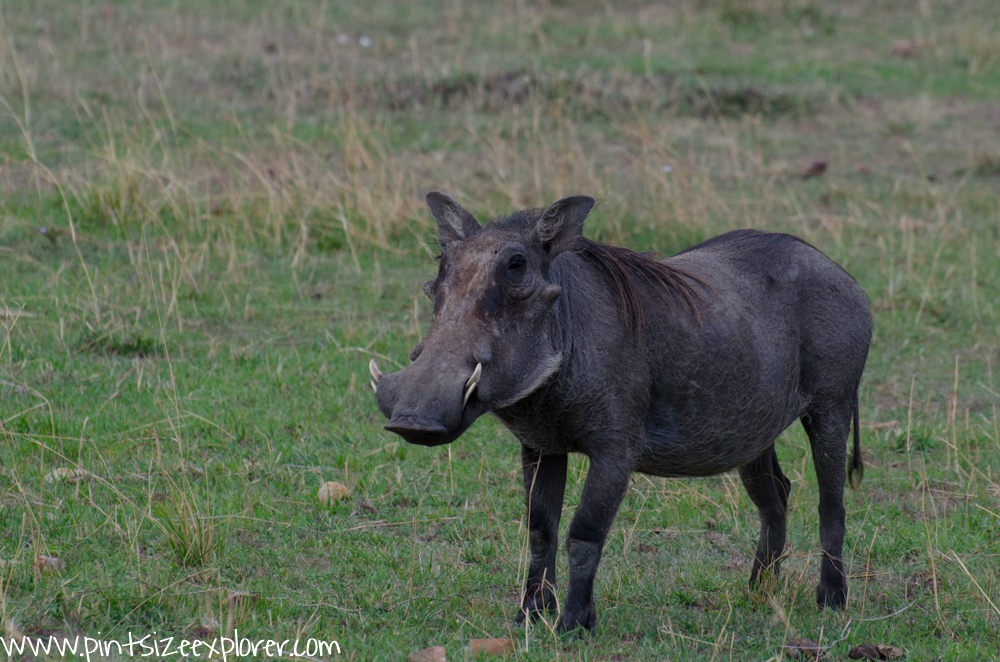 The guides keep in touch with one another via their radio systems, and we were able to find out that three male lions had been spotted nearby. We raced over and were lucky enough to see all three males, including one incredible young male snoozing right in front of the shrubs. What an impressive start to our safari in Masai Mara and the first of the big five that we spotted. 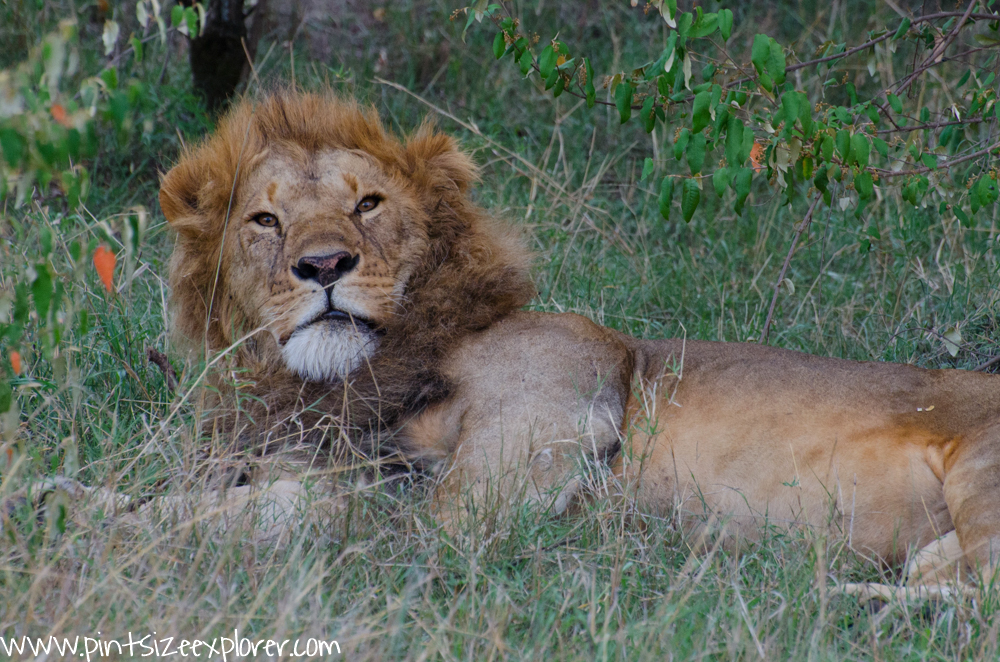 As Masai Mara is huge (over 1500 km squared), we opted to stay at a hotel within the National Park. This would mean less travel each day to get in and out of the park, would allow us to make the most of both sunrise and sunset game drives, and also meant we would be sleeping with the wild animals around us! The sun had set once we arrived so we were escorted to our rooms. Good job as there was a ginormous hippo right beside our hut. He wandered out from the hippo pool at the rear of the grounds and was just causally chomping away at the grass. We would later drift off to sleep with the sounds of his groans echoing around us. 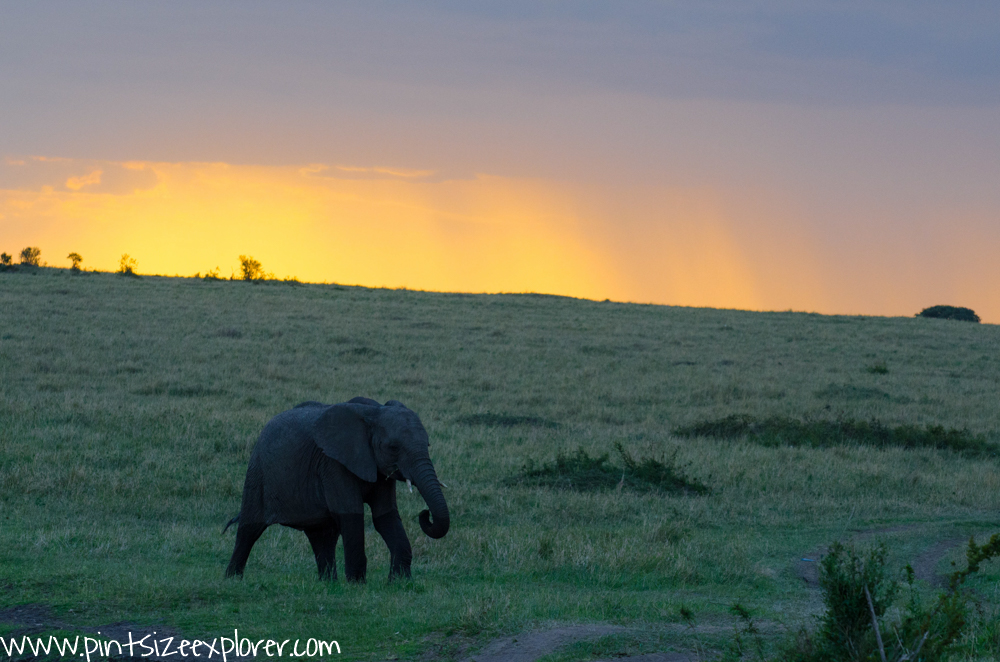 The following morning we had an early breakfast and headed off at 8:30 am for our game drive. We piled into our monster 4×4, popped up the roof, and pulled out our binoculars to get animal spotting! There are endless amounts of dusty dirt trails throughout the park and it amazed me how our guide even knew where he was going, but we heard a black rhino had been spotted in the vicinity so we zoomed off in search of our second big five sighting. 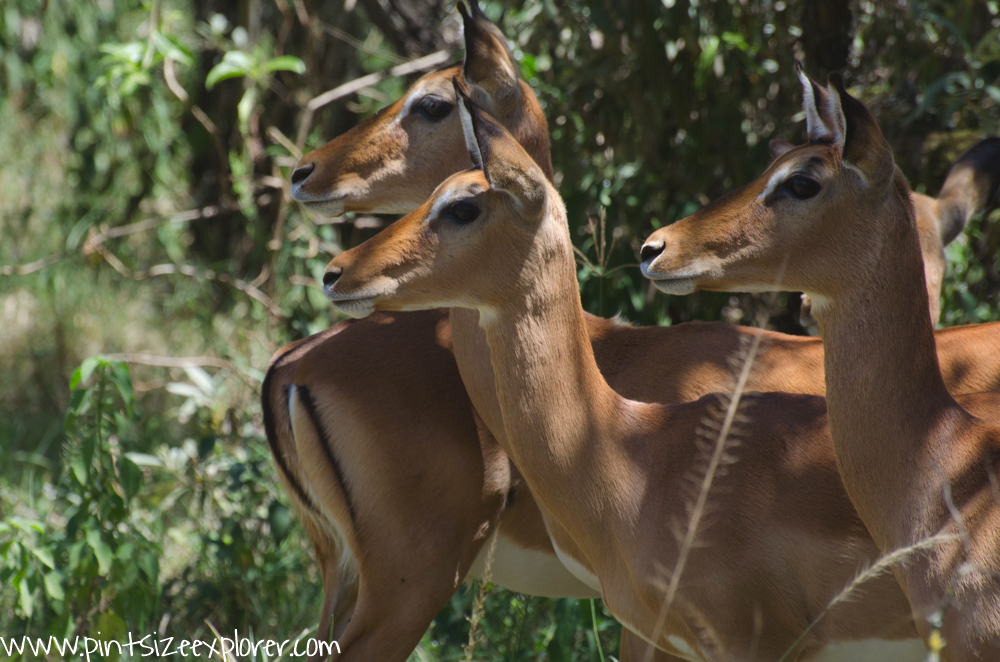 Amazingly, with his super sonic eyesight Alex spotted a ‘large black blob’ in the distance, and this was our rhino! Not only were we the only ones there, but this enormous endangered rhino fearlessly walked directly in front of us, just metres from our car. To see a black rhino in the wild is extremely rare, so we were exceptionally lucky to have seen him. 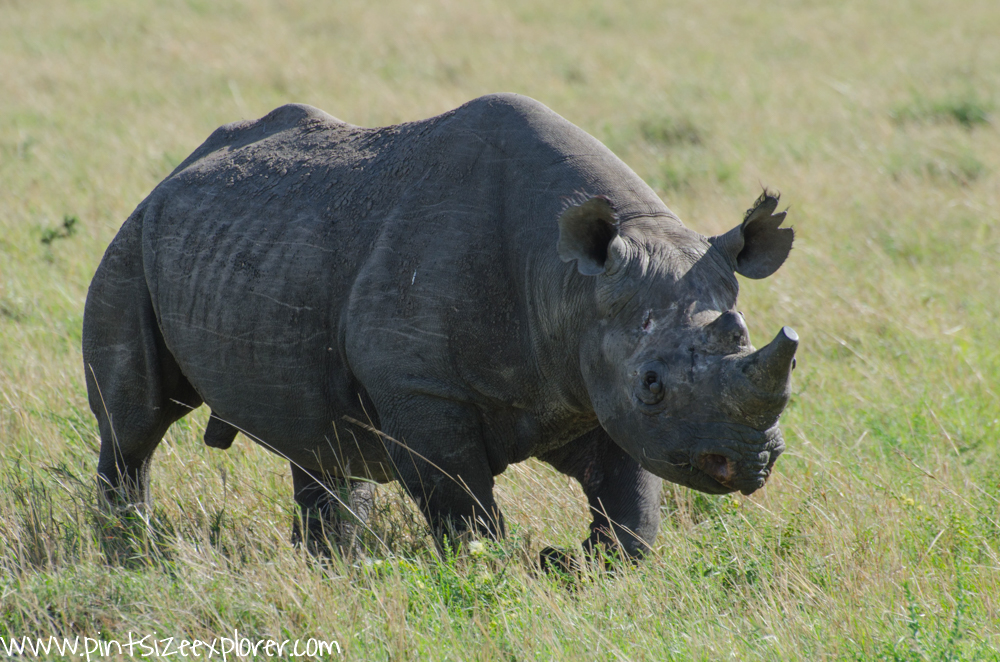 We spotted loads more animals during our game drive that morning, herds of elephants, endless amounts of buffalo, several lionesses, more pumba’s, and countless zebra among other wildlife. One animal I wasn’t expecting to see was a hyena – such funny looking animals! Returning back to camp at 12:00, we grabbed some lunch and spent our afternoon by the hotel pool watching the naughty monkeys stealing items from the bar, and having a look around the hotel’s elephant viewing deck and hippo bar. 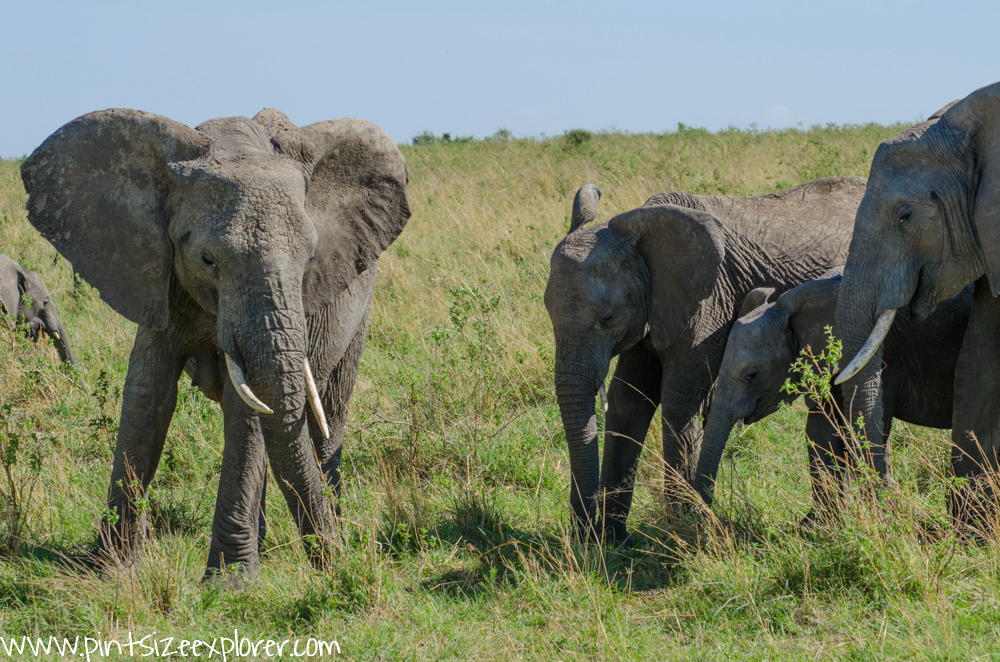 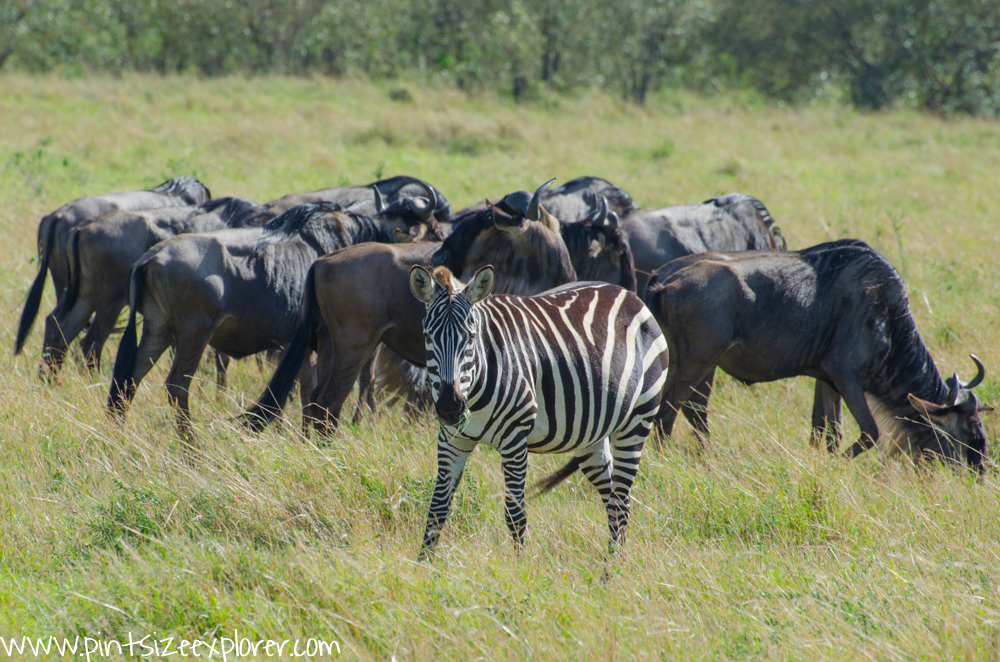 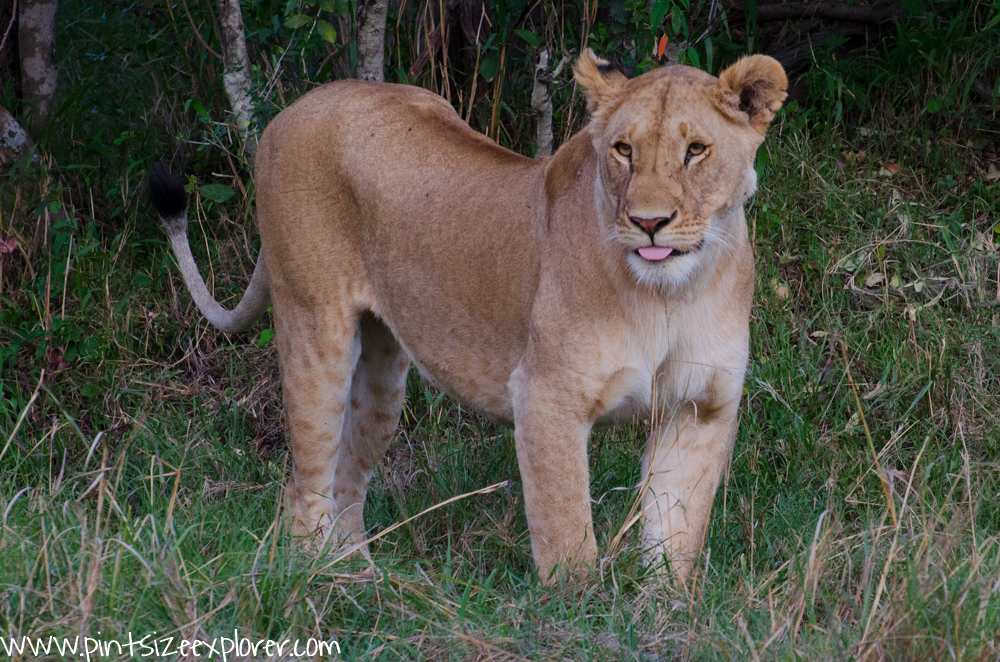 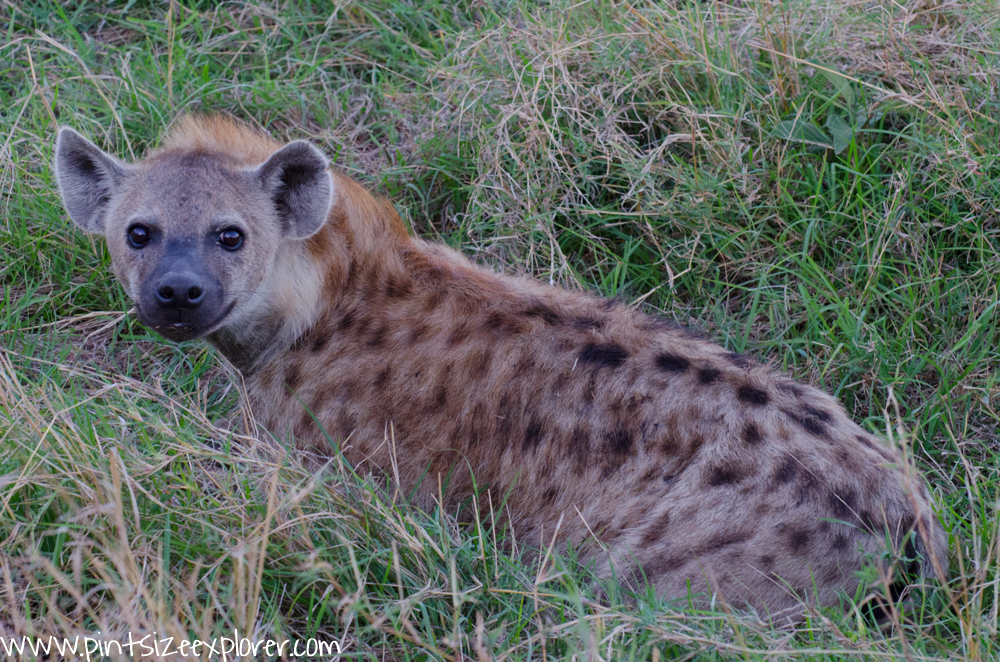 With the occasional hippo roar you hardly need to set an alarm, but we were up super early to leave at 06:30 for a sunrise game drive. This is a fantastic time to head out, not only for some great photo opportunities, but also to see the park come to life. I am extremely fond of giraffes, and today was the day we finally got up close to spot them. I won’t lie, there was a shriek of excitement from me as I bounced up on the car seat to get a better view. These gentle animals move so gracefully as they wander around. I’m smiling just thinking of them now 🙂 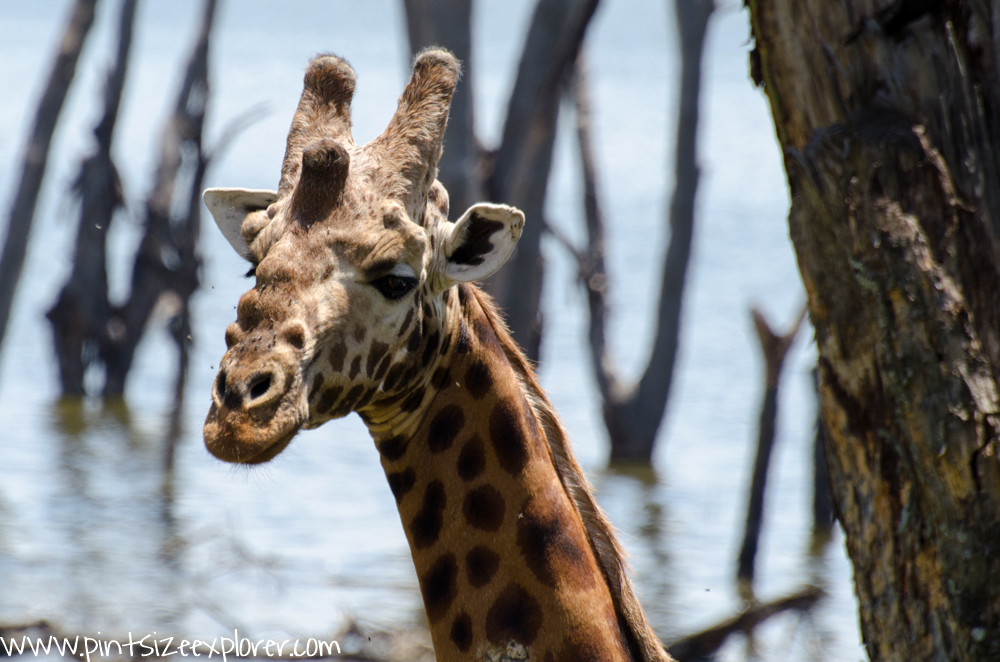 The park is relatively flat although there are a few reservoirs that the 4×4’s can drive through. We passed through one bumpy stream in particular and just as we thought we’d make it to the other side there was an almighty bang as we hit an unexpected ditch. The front wheel dipped in and we were thrown against the side of the car.

Unfortunately Gemma was thrown a little too hard and completely shattered one of the side windows. Fast-forward 10 minutes and we were outside trying to shake out the million shards of glass that had covered her. Such a gracious moment for her to be stood in the wild in her pants, but once the initial shock wore off Gemma was thankfully a-okay with just a few cuts and bruises. 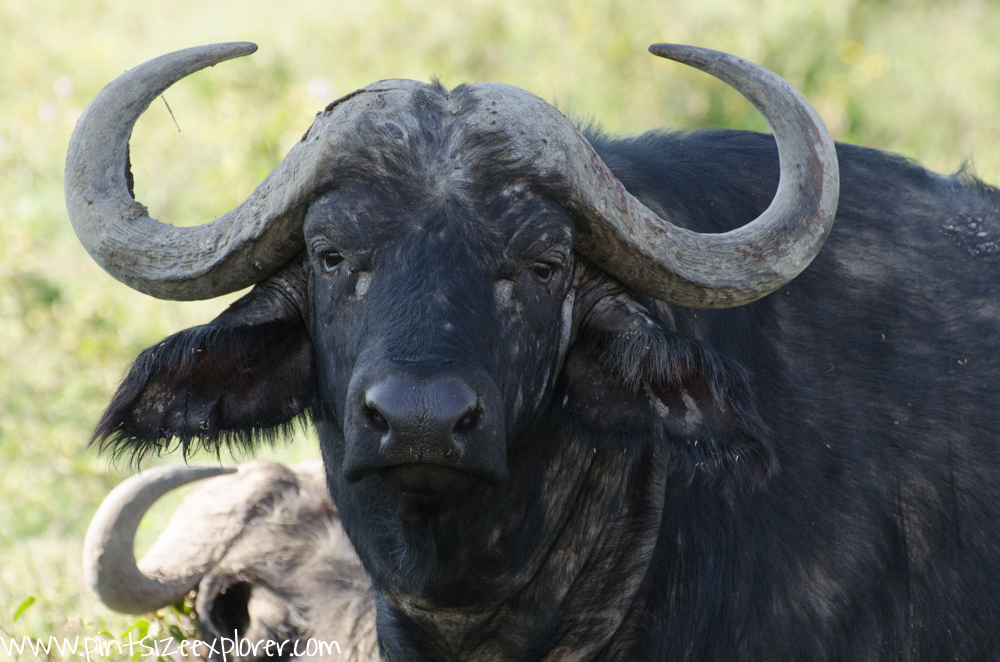 Our drive back to camp was less eventful. We spotted more zebra and buffalo, as well as a few lionesses whom had a litter of cubs hidden in the bush with them. Unfortunately the cubs were tucked away and we couldn’t spot them, even with Alex’s super sonic eyesight! We got back to camp at 09:30, just in time for breakfast, spent the afternoon by the pool and later had a massage. A group of lovely giraffes wandered over to where the camp’s viewing deck was, so we had another sighting of giraffes before we headed off on our sundown game drive. 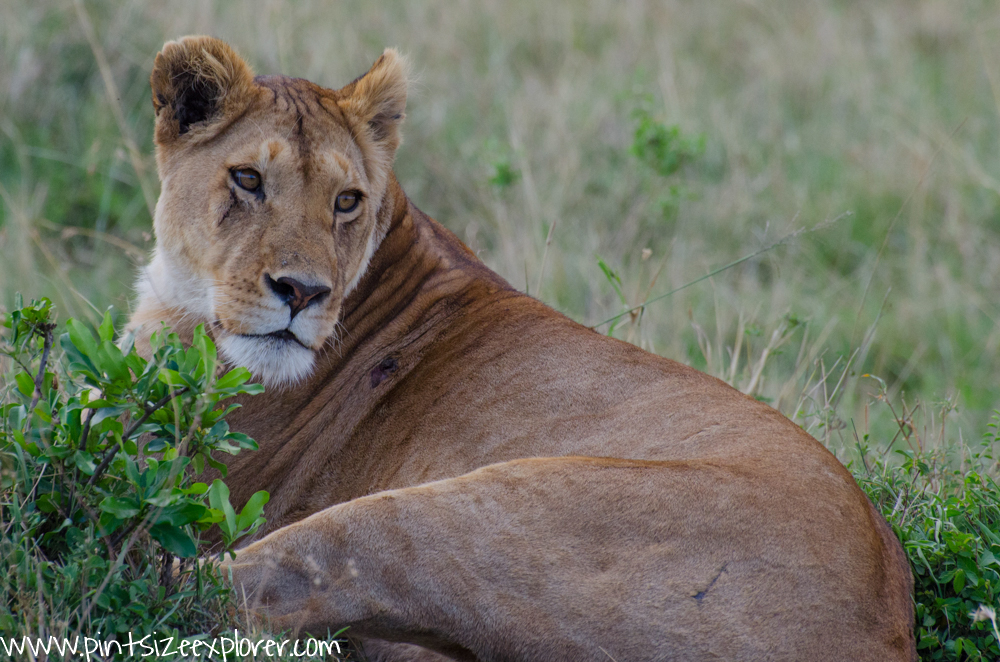 Heading back out at 15:30, with our missing window freshly patched up, we were on the look out for a leopard that had been spotted up in the trees. We always thought this was a bit of a myth, but they do actually sit up in the trees! Seeing this remarkable big cat meant we had now spotted all of the big five! YEAH! 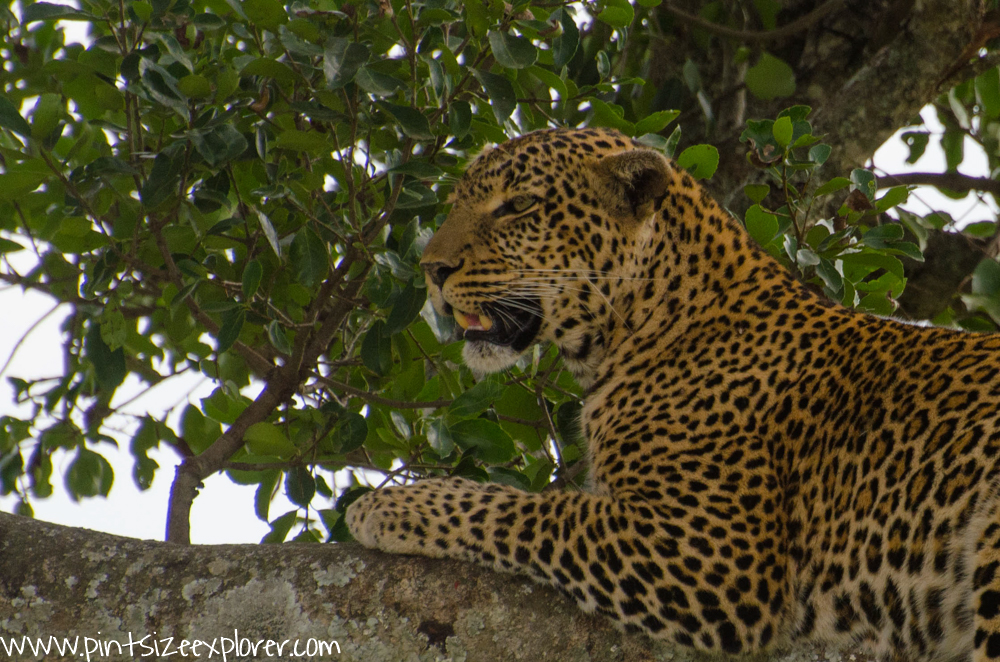 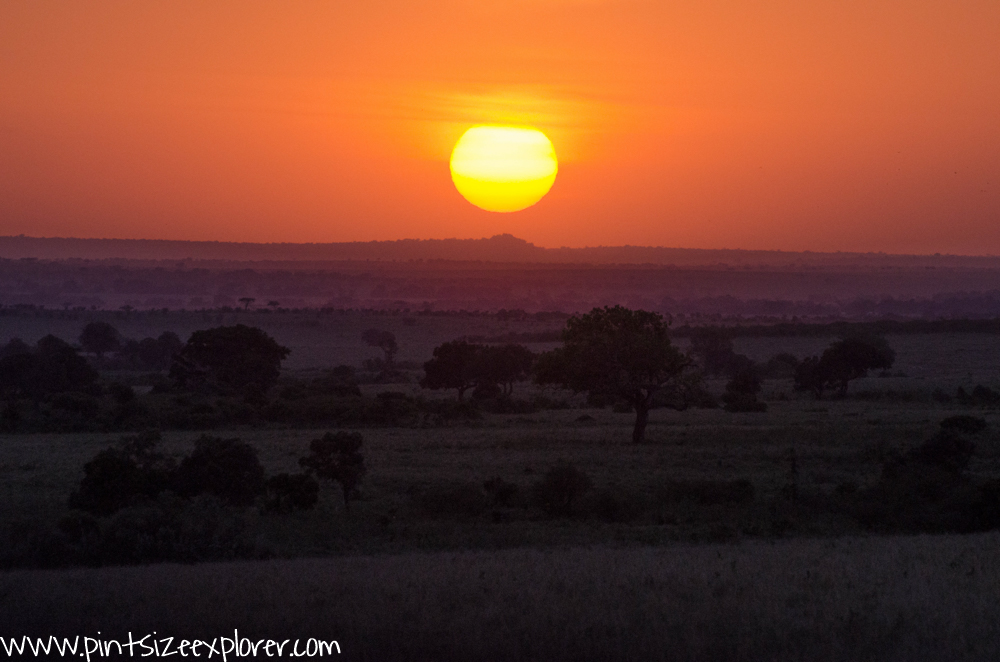 On our last morning we headed out for another sunrise game drive at 06:30, and we were lucky to see yet more wildlife, although no new animals that we hadn’t yet already spotted. We arrived back to our hotel around 09:00 as we had a long drive back to Nairobi for our final night before our International flights home. Our safari experience had been phenomenal and something I couldn’t recommend more highly.

Do it! Get out there and experience this for yourself before it’s too late!

Where Did We Stay?

Located in Masai Mara National Park, Keekorok is part of the Sun Africa Hotel Group. During our Safari we stayed at three different accommodations and this was the most expensive hotel we stayed at. Sadly our visit was a complete disappointment due to the hotel being under new management, which had a clear impact on staffing issues we encountered. 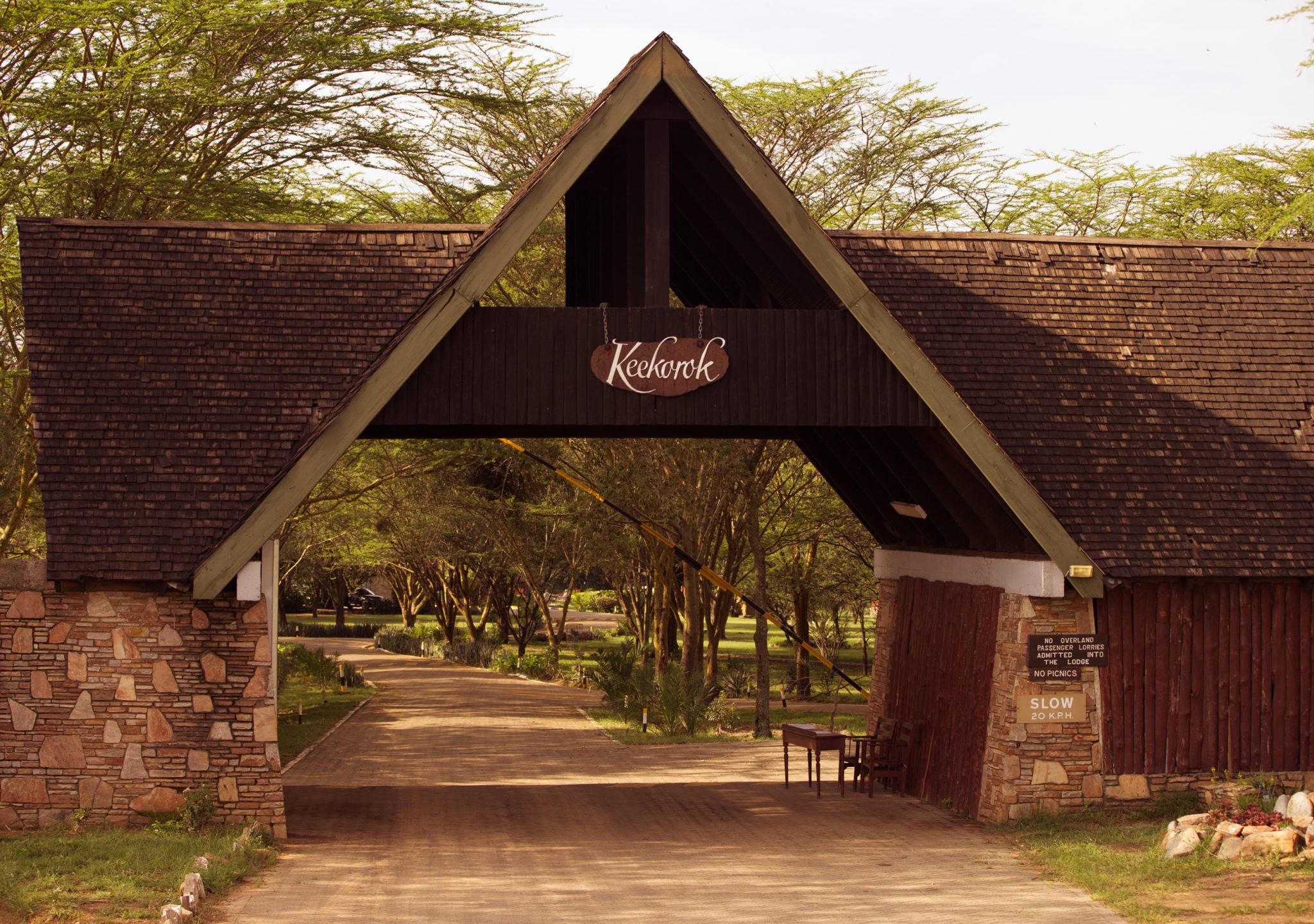 The Good – This vast hotel lies within 700 sqm of land and has 99 rooms ranging from standard, chalet and suite rooms. The outdoor pool is of a decent size however the pool bar was often left unattended. The spa tent was nice and the girls kindly arranged at short noticed for us to have massages. There was an 800m boardwalk that led up to an elephant viewing deck (we also spotted loads of giraffes here), and a hippo bar that looked out into the hippo pool. Forget spending hours your 4×4 looking for elephants and giraffes – they were all there in our back garden the entire time!!

The Bad – The food was however exactly what you’d expect of a generic all-inclusive hotel – plain, bland, unimaginative with the leftovers recycled over several days meaning there wasn’t a huge choice of food throughout our stay. For the price we were paying, the rooms were small and basic. Our friends room was left without water for 2 days whilst they replaced a water tank, yet no-one thought to tell them or move them to another room despite numerous complaints. A good size shop can be found opposite reception but most items aren’t priced and their cost changed daily depending who was working there.

The Ugly – Cash isn’t used at the hotel, instead you are asked to sign a receipt for every item you order. At check out we were given our final bill but with no receipts. I asked for our receipts to ensure we were paying for what we had ordered, as a previous hotel had tried to charge us over $100 of other people’s food. About 10% of the signed receipts were handed over – including some from different rooms and some signed by different people. We weren’t going to pay these so handed over cash for the value of the receipts that were ours, but the staff wouldn’t take the money (as in literally refused to take our money from the desk). They were too busy blaming each other for the lost receipts, so we walked off but were told they wouldn’t open the front gates for us until we paid our bill. A bill they were unable to justify. The entire fiasco was a joke. Eventually the manager was called and some 45 minutes later we paid for the receipted items only.

An absolutely shambolic stay and I wouldn’t recommend this hotel at all. It is currently under a management change, which clearly reflected on our poor stay. FYI, I did complain to head office and got a 30% refund for our stay!