Hopefully you had a chance to see my post from last week, which covered the first half of my Belgium road trip, briefly through Brussels and then onto Ghent. During this post, I’m going to cover the second half of our road trip, which took us to Bruges and its surrounding beaches.

Click here to read more about Brussels and Ghent 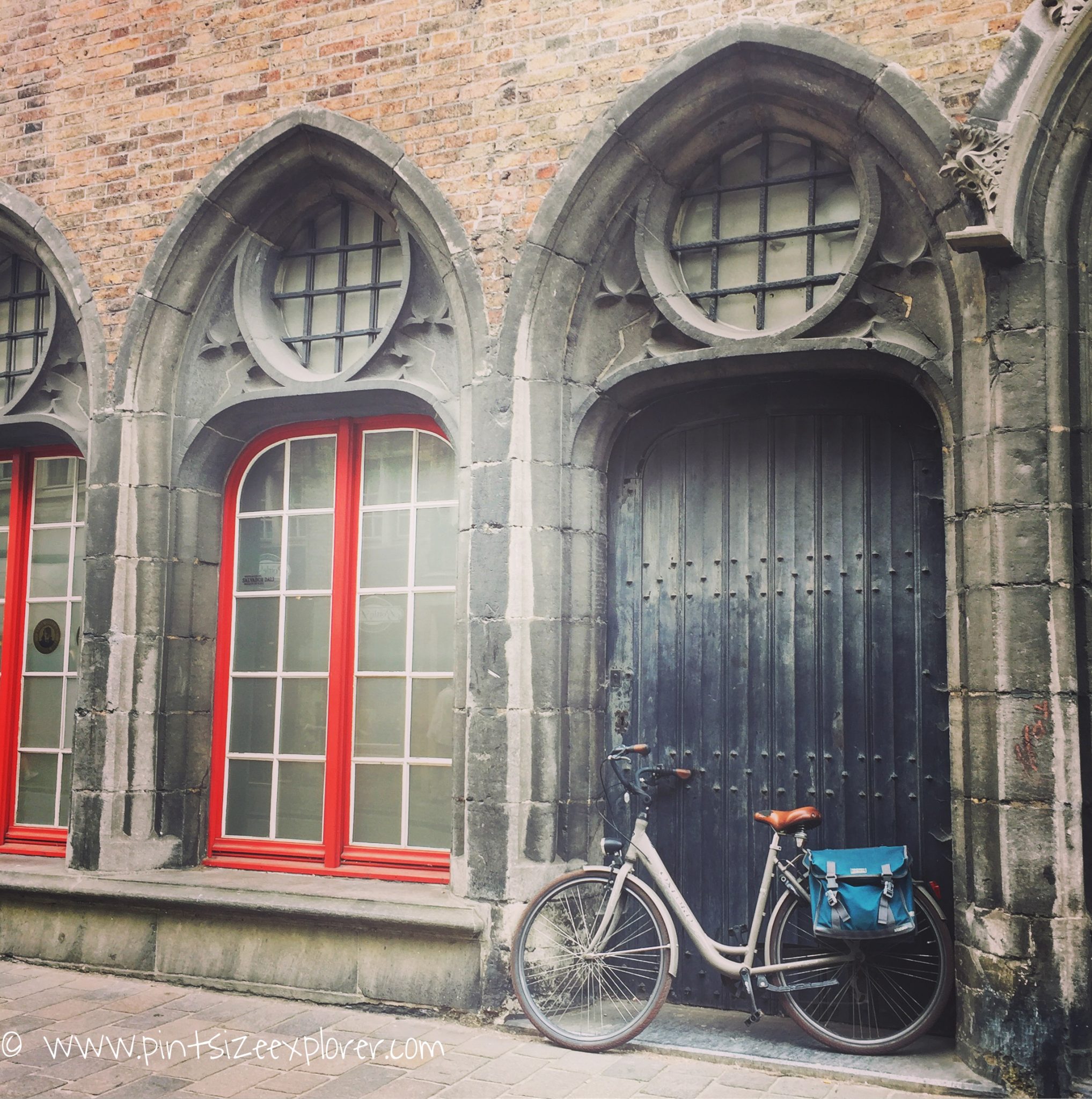 All the cities within Belgium are so close together that unless you are stuck in some seriously bad traffic, then the journey shouldn’t take you more than an hour. We drove from Ghent to Bruges in 45 minutes and conveniently parked in a large underground public car park that was located directly under our hotel. Prices were reasonable with a flat rate of €9 / 24 hrs, with slightly cheaper hour and half day rates available too. 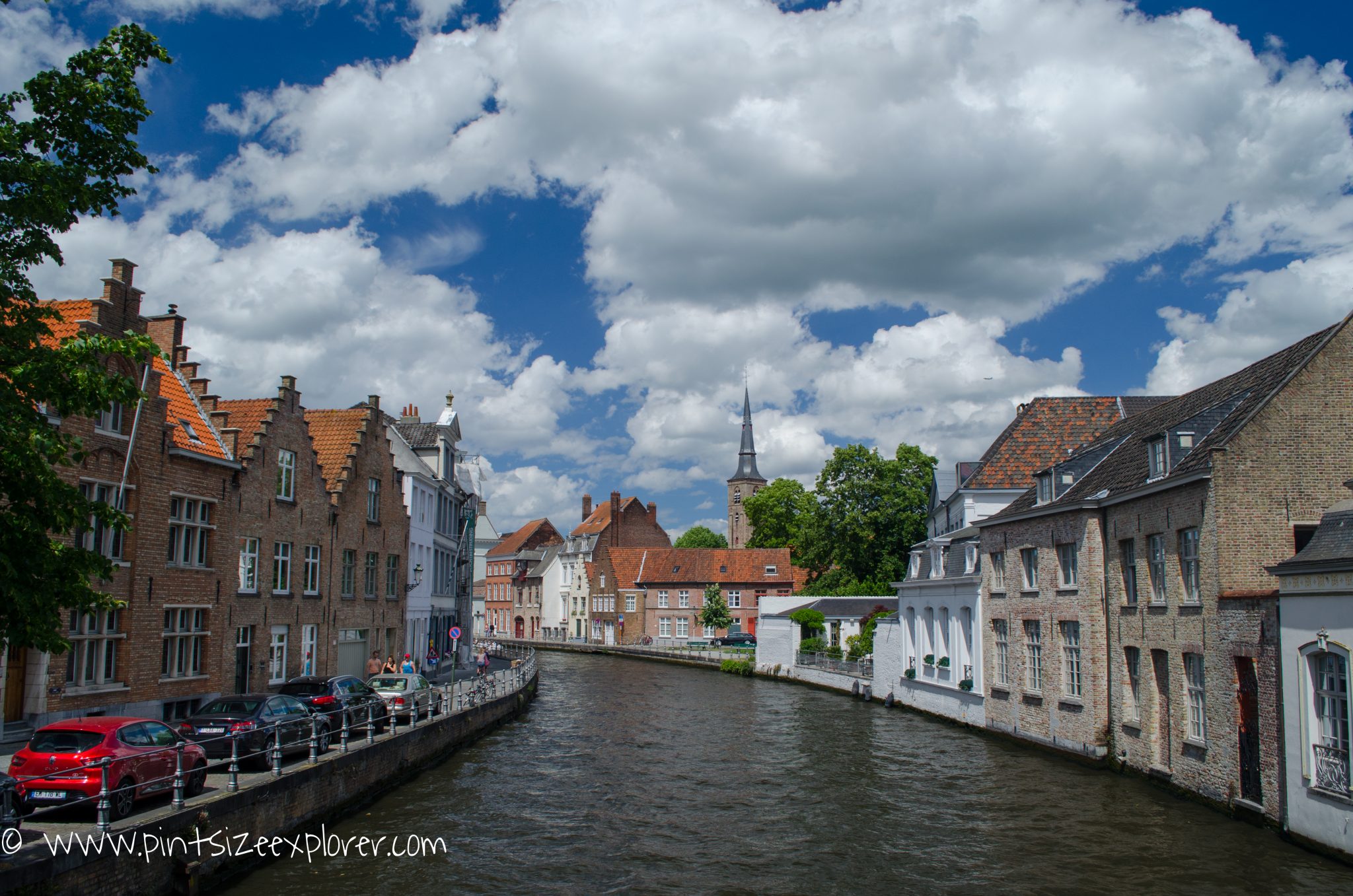 Much like Ghent, Bruges is a wonderful city small enough to wander down all the pretty lanes without ever getting lost. As lovely as Bruges was, for me this was far too touristy. There were people everywhere, tours were sold out and several tourist sites had long queues no matter what time you tried to visit. 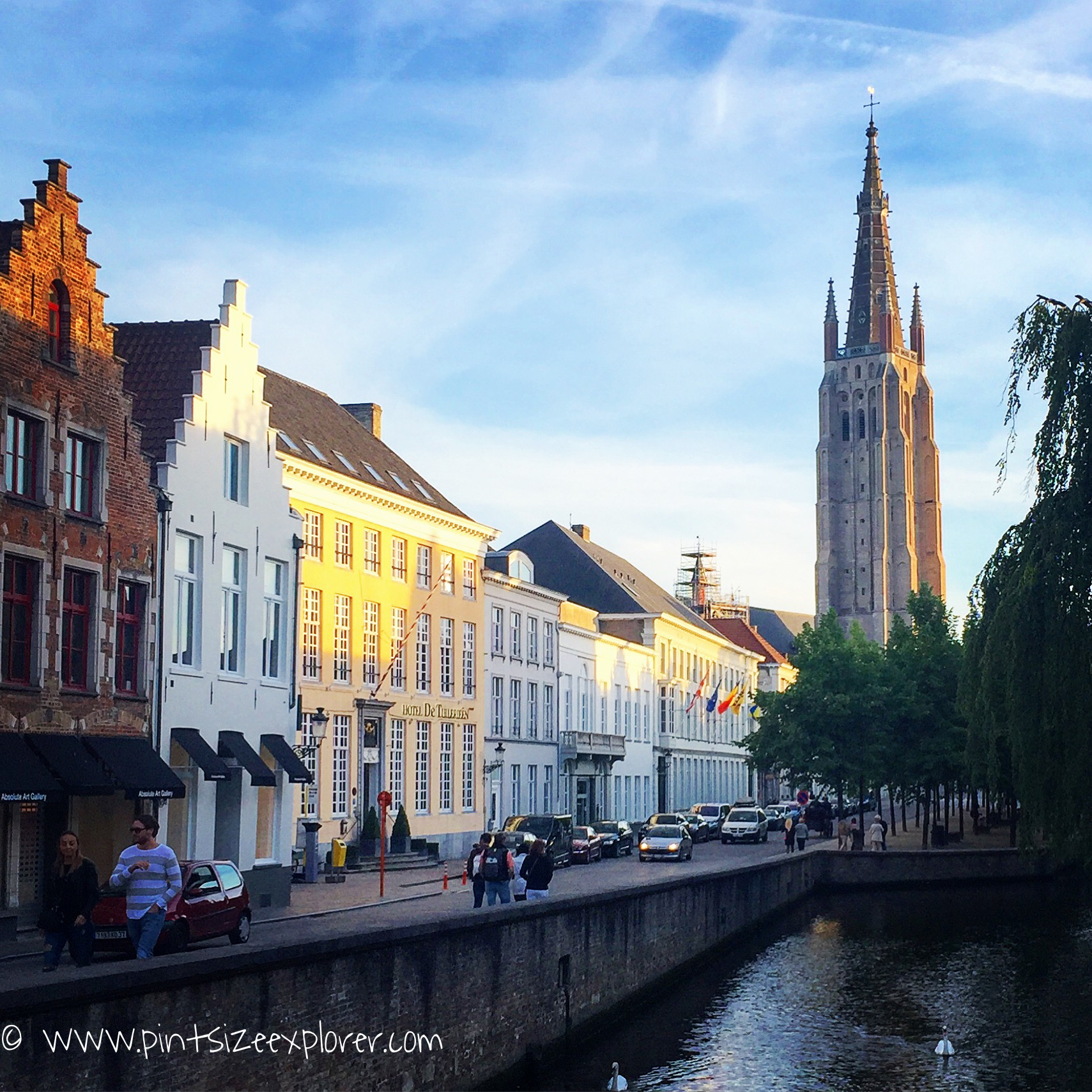 Strangely everyone seemed to focus on the central part of the city, however just a mere 10 minutes away along the outskirts of the city it couldn’t have been any different. Here you could wander along a picturesque residential street, walk along the canal and enjoy Bruges as it truly once was before the tourists arrived. 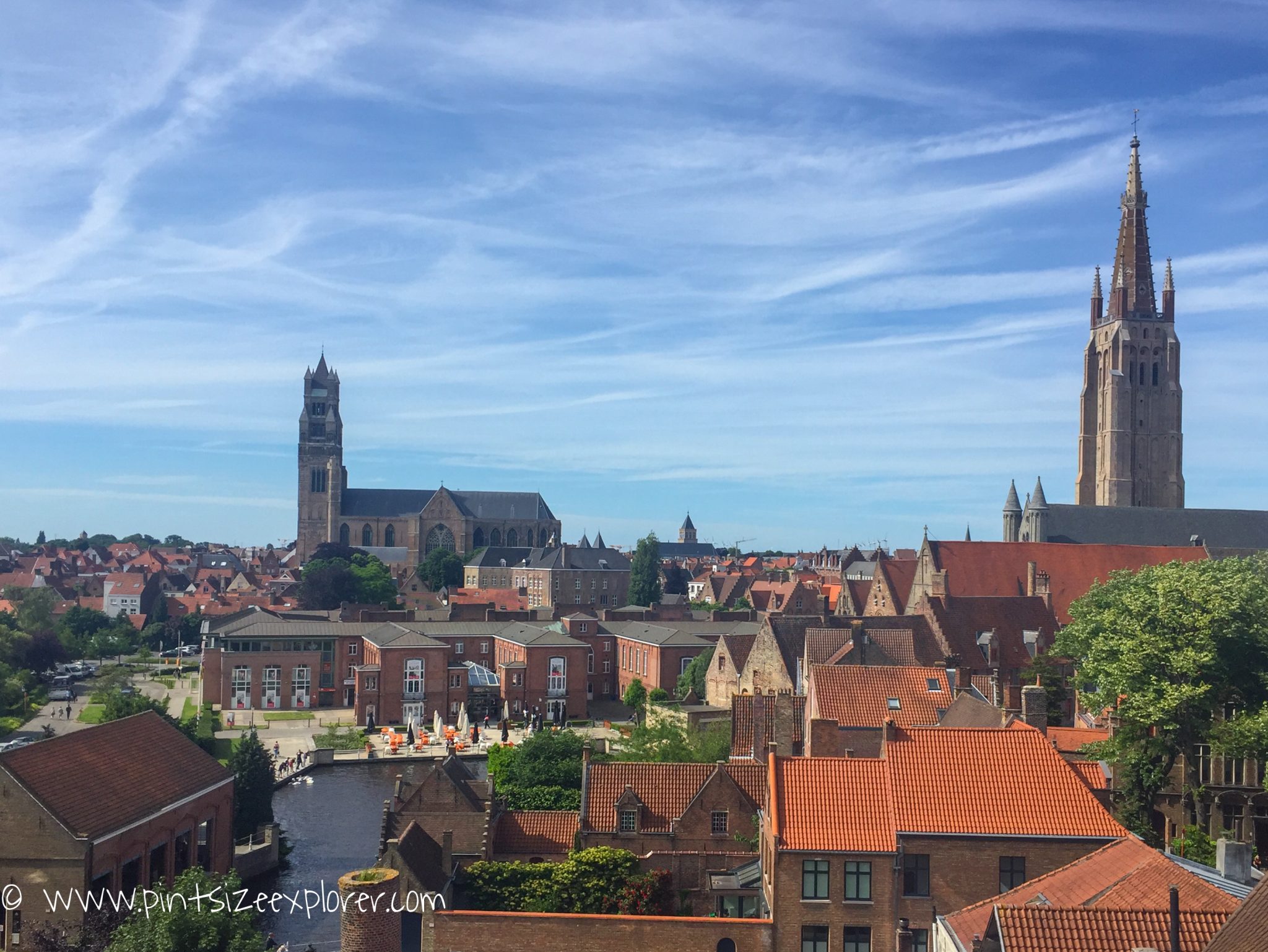 With a good handful of sights too see, and several entertaining museums worth checking out, I’d suggest you plan at least two nights and three days in Bruges.

Belgium is known for it’s beer (as well as its chocolates, waffles and fries!), so it was an obvious choice to visit a brewery during our time in Belgium. The Halve Mann Brewery was the first brewery in the city and still produces up to a whopping 4m litres per year! 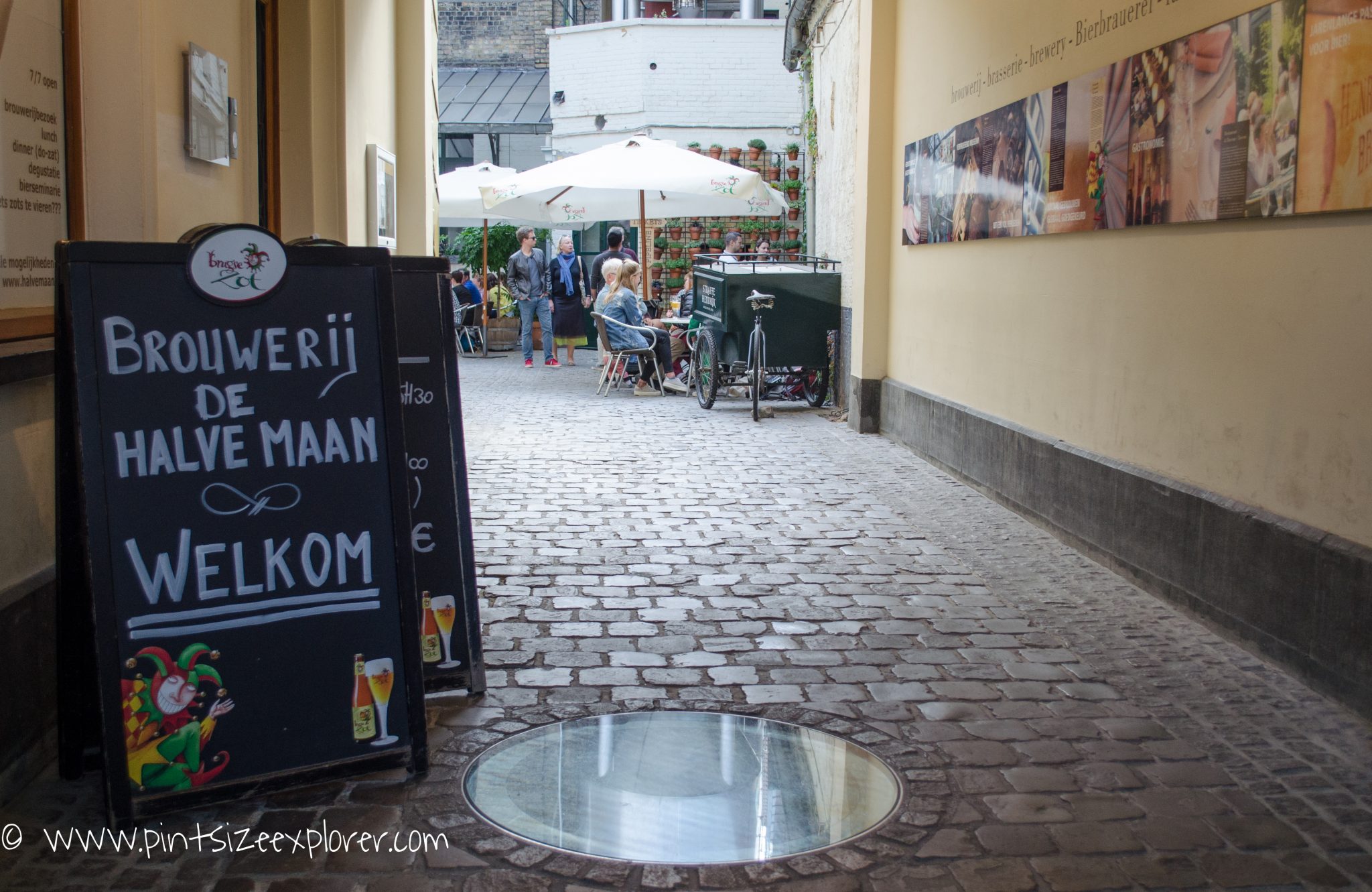 Daily tours in English, French and Dutch cost €9 / 45 mins, with up to 30 people per group. the tour walks you through the brewery with a knowledgeable guide, and provides lots impressive background history – did you know there is a huge underground pipeline that runs from the brewery to their second site a few miles out of town where they bottle and finish manufacturing offsite? Entry tickets come with a complimentary beer at the end of the tour, so don’t rush off! Longer XL tours are also available for €19 / 90 mins, which include a private beer tasting session within the brewery cellars.

We all love chocolate and it’s literally impossible to visit Belgium and NOT sample some of the amazing chocolates and truffles. We accidently discovered Pur Chocolate (1 Walstraat Street), a cute little shop near our hotel, firstly because we noticed they had free samples and wanted to try a truffle, however this easily became our favourite chocolatiers! On our last day we bought a selection of white, milk, dark, orange, champagne, and cherry truffles, as well as scrummy salted caramel chocolate too. My mouth is watering at the thought of those truffles… 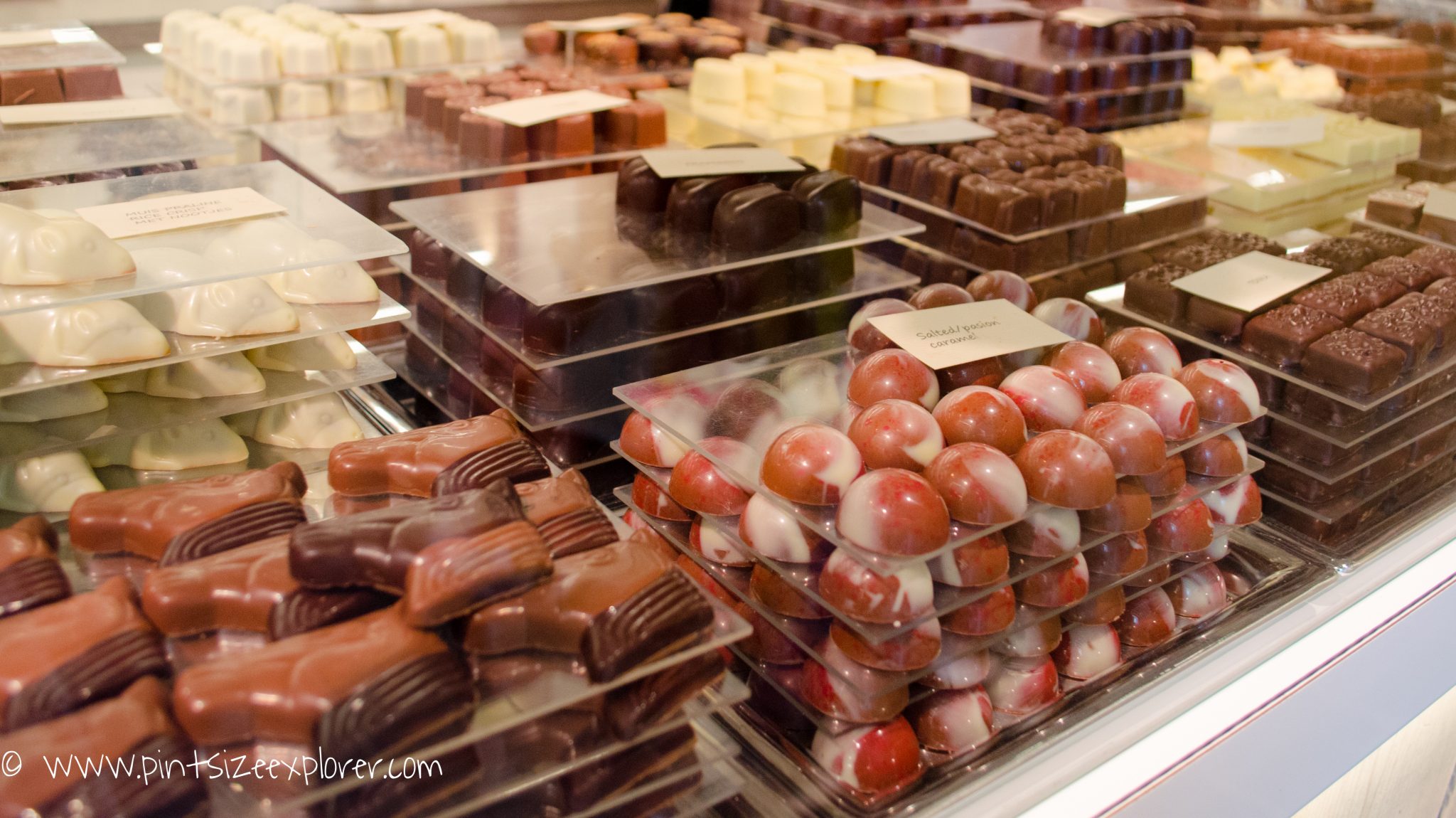 The epi-centre of Bruges, this towering clock tower stands in the heart of the main city square. Entry was €10 per person but the line was seriously long. If you want to climb the tower for amazing city views, then head there early to avoid the crowds. We missed out on this one as we’d already climbed the Ghent Belfry a few days before and felt like we were doubling up on our touristy things to do.

In between a long day milling around this lovely city, make sure you sample some of the best waffles Belgium has to offer! You’ll find plenty of small waffle shops specializing in waffles with a million different toppings. We found one place that sold waffles on sticks which was a great ‘lighter’ option for a snack J My favourite topping is always strawberries and chocolate. What’s yours? 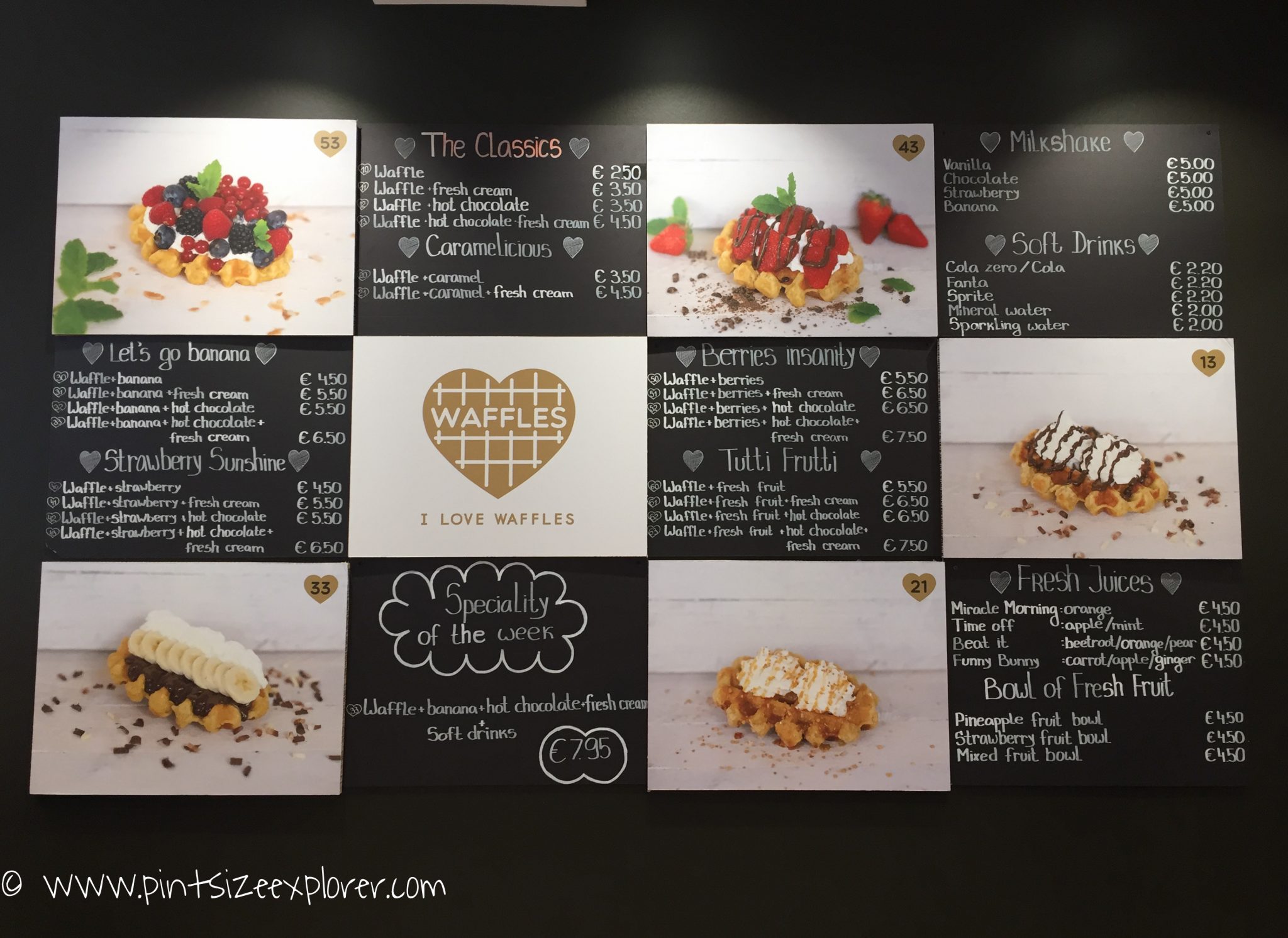 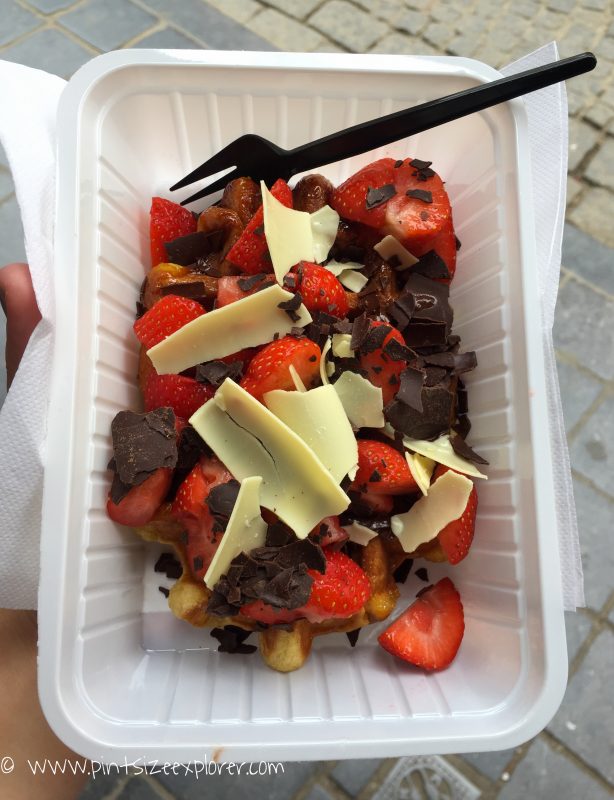 City Tours By Horse And Carriage

If it isn’t the sound of someone munching a chocolate or slurping a beer, then it’s the sound of a horse clattering down the streets that will become second nature to you here in Bruges. You’ll have no problem finding a horse and carriage in the main square, however be prepared for the stonking €50 charge for a 30-minute tour. 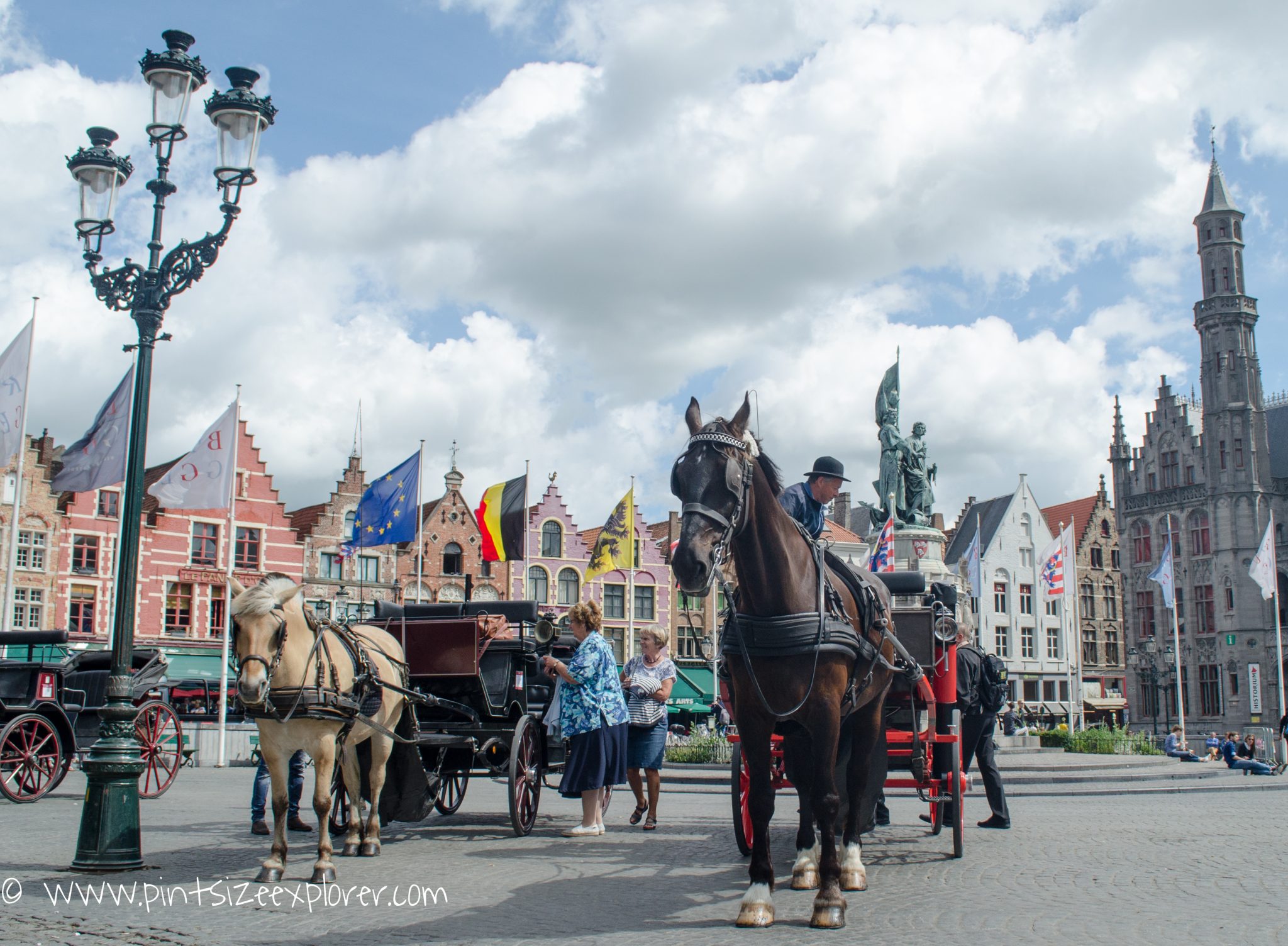 This was a great little museum to visit and took roughly 45 – 60 minutes to wander through. When buying your ticket you’ll be given a laminated info sheet along with a free Chocolate bar, score! It’s worth noting that there were a few options to purchase combination tickets for the city museums which could save you a fee euro’s. We bought a combo ticket that also included entry to the frites museum. Yes, that’s right. A museum about chips. 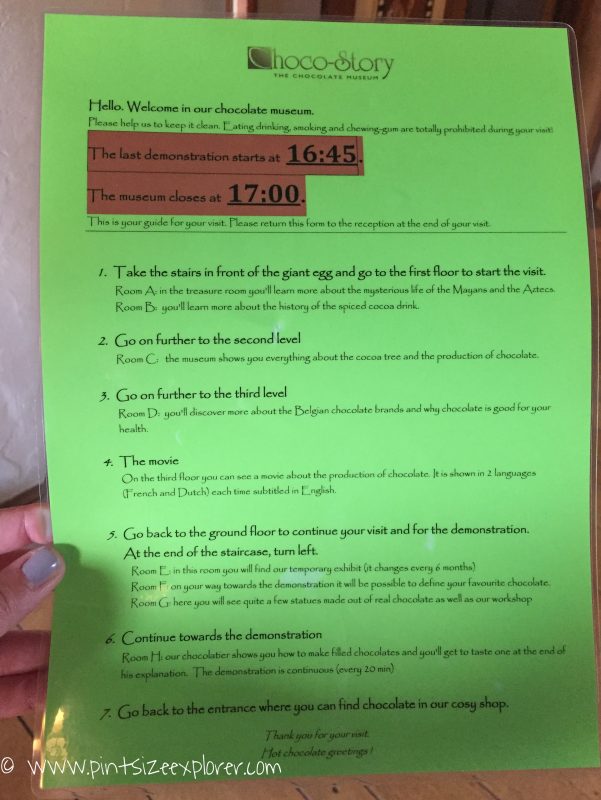 There were three different floors with a heap of displays and information boards in English, French and Dutch. I like museums like this where you can take your time and choose to read as much (or as little) as you like. There was a lot of information available here! Learn more about the Mayans and Aztecs, spiced cocoa drink, and how back in the day it was a sign of wealth to drink hot chocolate! You’ll also learn about the cocoa tree and the production of chocolate, as well as the history of Belgium chocolate brands. 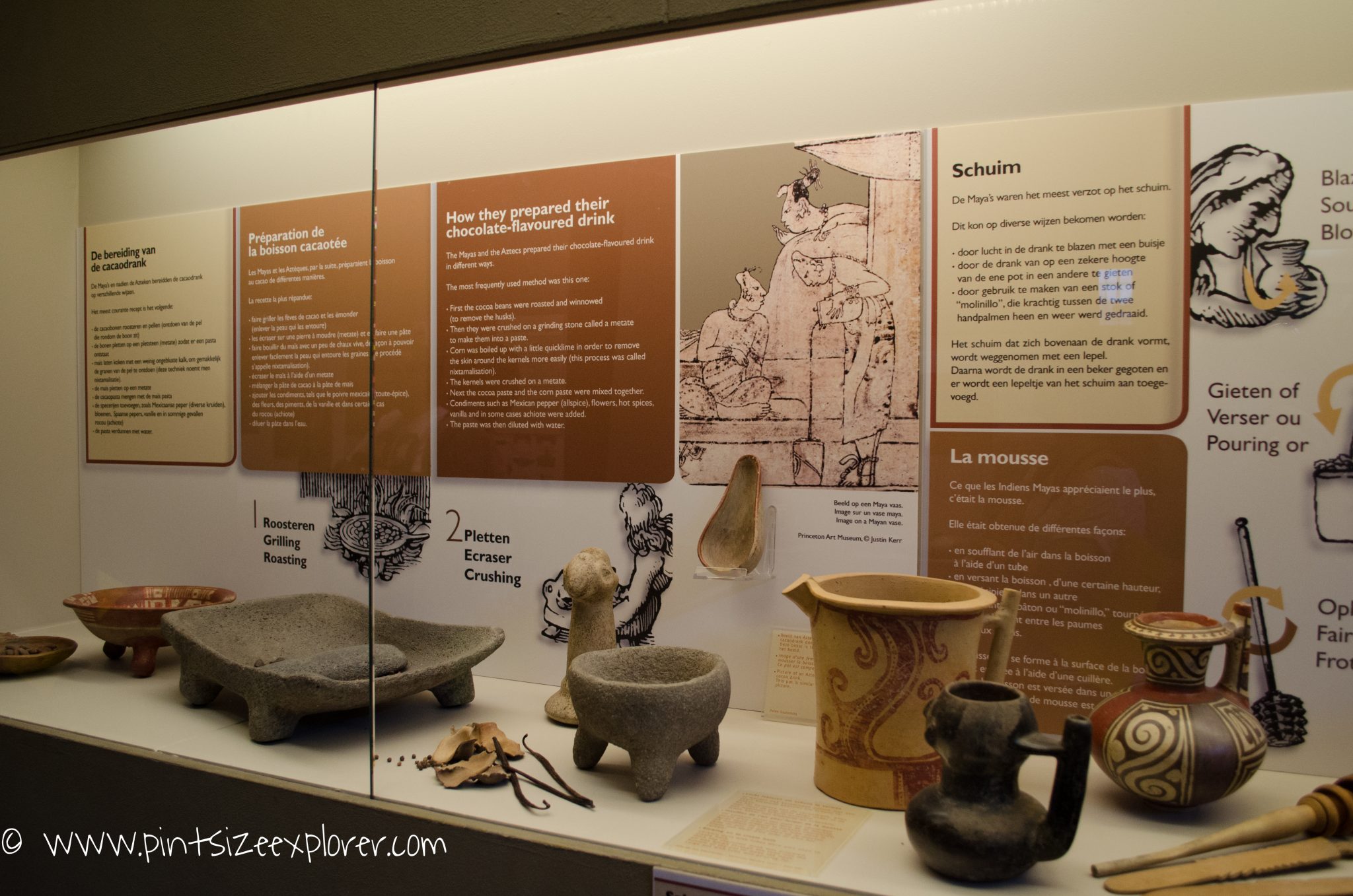 There was also a short movie detailing the production of chocolate (shown in both French and Dutch, but both with English subtitles). The museum ends with a live demonstration and you’ll also be given (more!) chocolate to sample. Upon exit you’ll pass through a small shop where you can purchase a number of different chocolates. 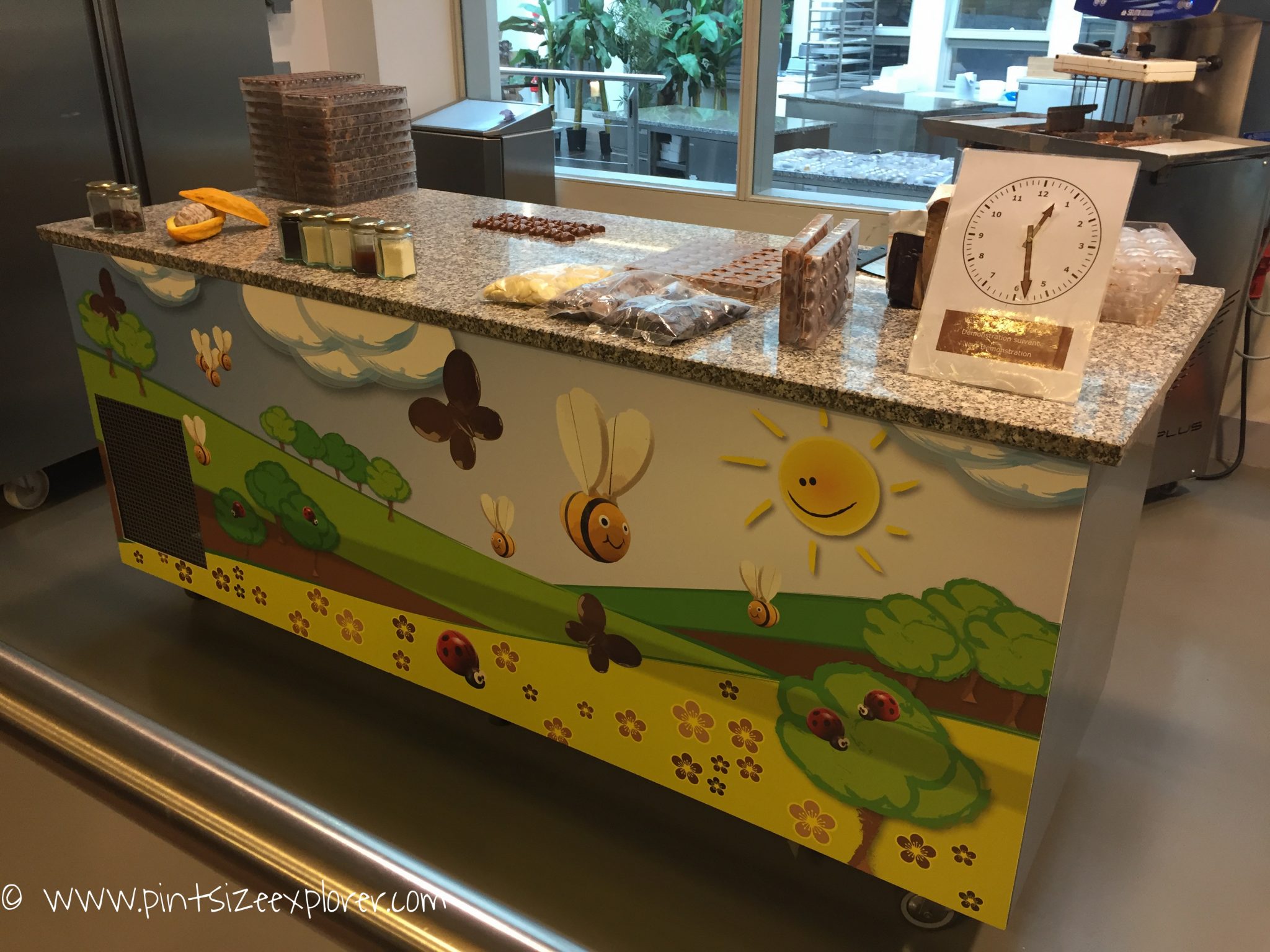 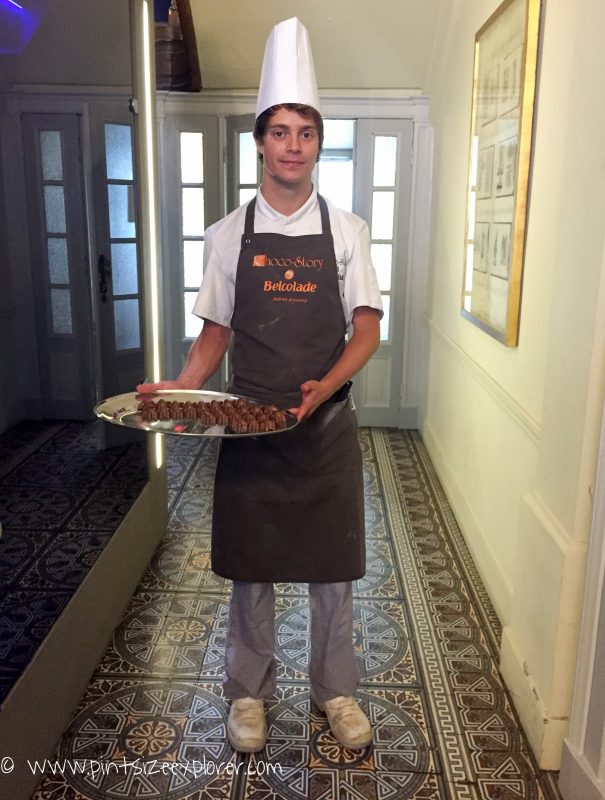 Note: I’ve just written this and realised I hadn’t eaten my chocolate bar yet. I have now scoffed it all and can confirm it was delicious! 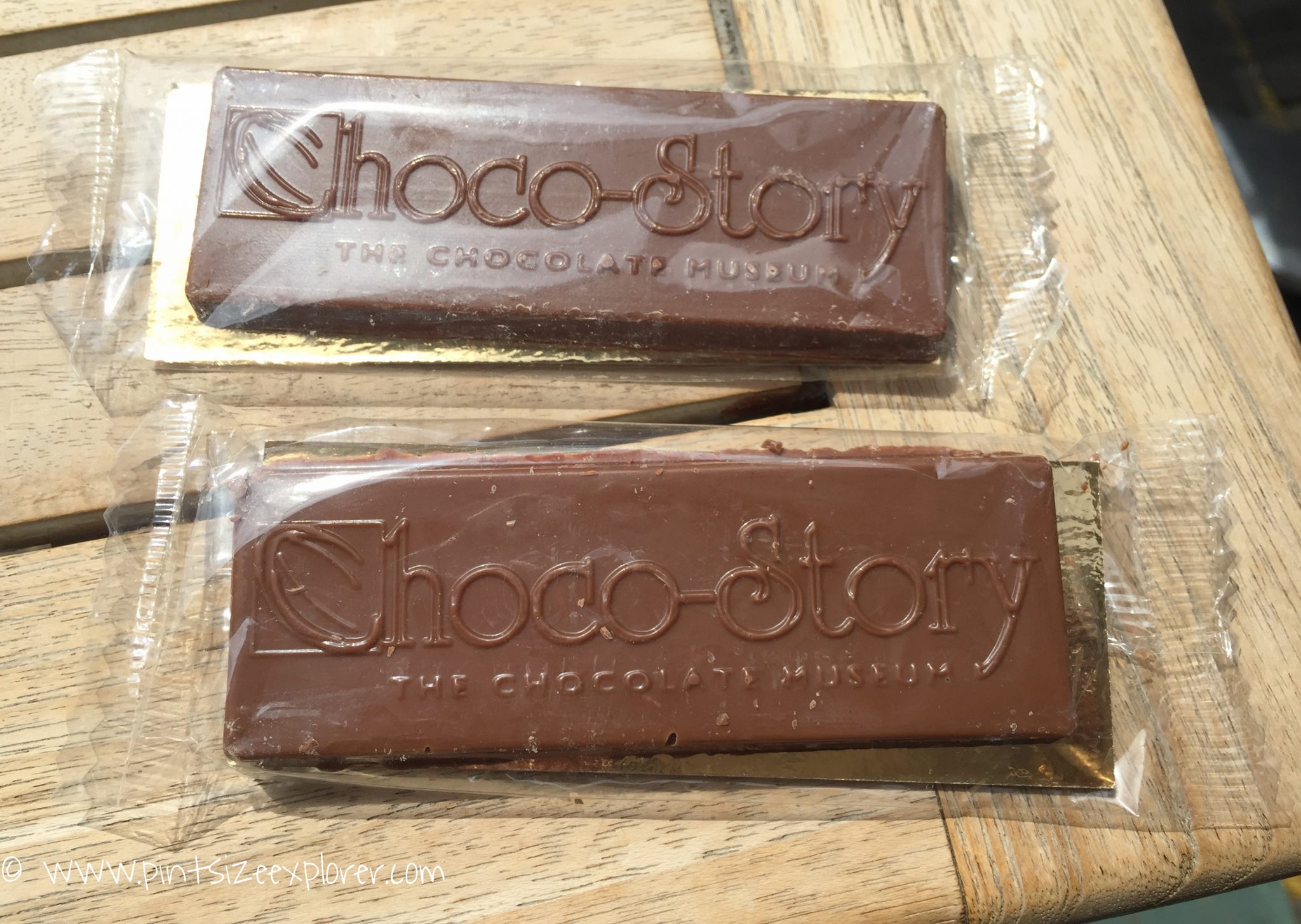 So it turns out the Belgians are fascinated with beer, chocolate, waffles AND chips! One of the more bizarre museums I have ever visited, but at least I am now well informed of the history of the potato! Did you know the French fry is called so as a Belgian soldier (who gave another soldier some fries) but was mistaken for being French, and so his fries were referred to as ‘French fries’ but really they were Belgian fries! 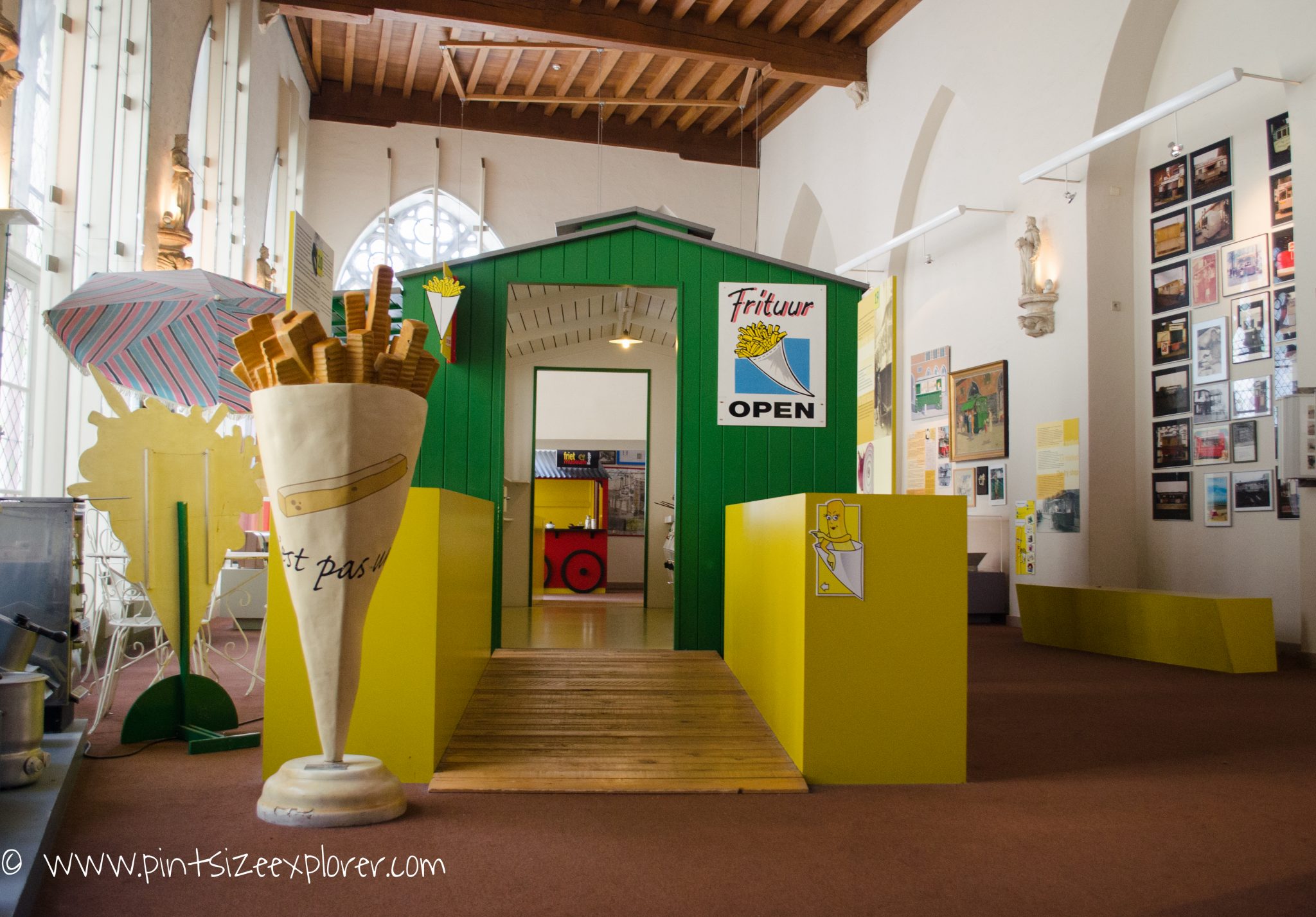 The layout to this funny little museum was very similar to the chocolate museum and was no doubt owned by the same company. There were many info boards in French, Dutch and English alongside a good number of displays. Your entry ticket will also include a discount voucher to purchase some real fresh Belgium frites from the lower level cafe. 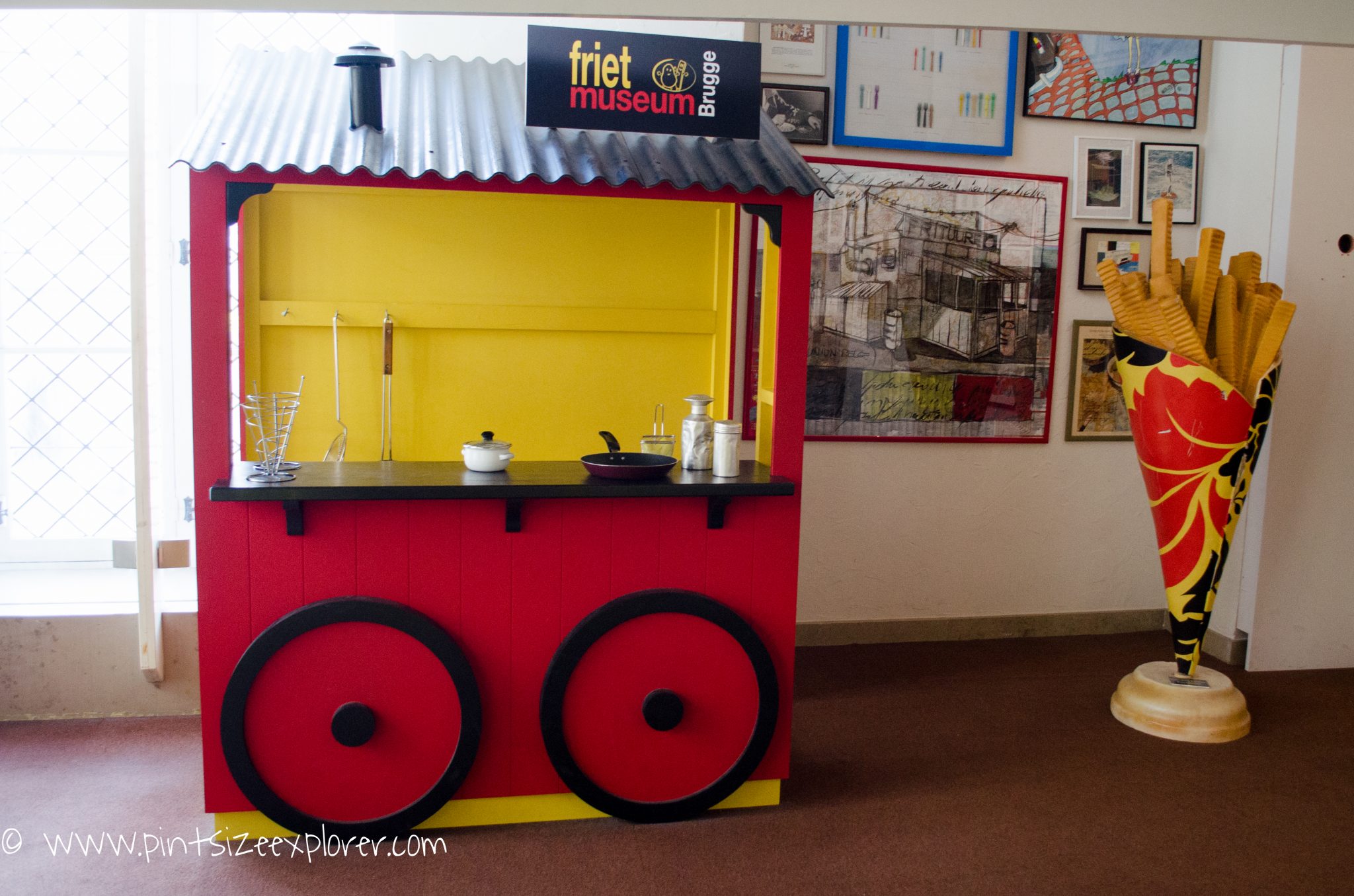 Note: the portions were very generous in size, so we used both our discount tickets towards one portion of frites which then cost €1.40. I can 100% guarantee these were the best frites I’d had in a long time!!

Escape the crowds and take a walk on the outskirts of the old city boundaries along the circular canal to visit one of the four remaining windmills that date back to the late 1700’s. During the summer months, the windmills are open to the public for a small entrance fee of around €4 pp. There is also a small museum for visitors too. This made for a pleasant break from the hustle and bustle of the city centre, and you’ll pass through some lovely picturesque residential streets along the way. 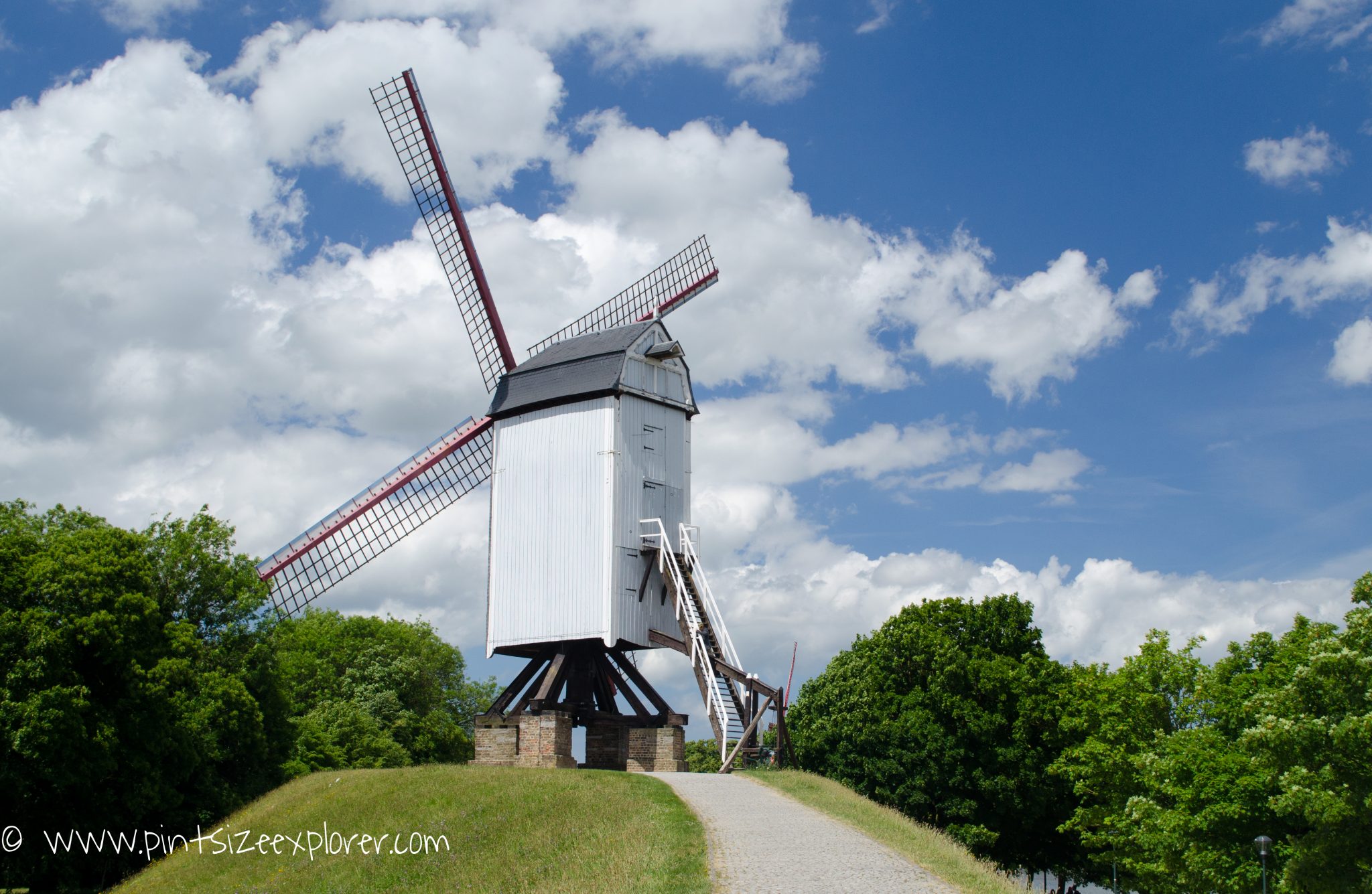 Take a walk along the outskirts of the old town and you’ll stumble across the four medieval town gates that still stand today. These gates were first built in the 13th century and remain in good condition. You’ll also discover some lovely open spaces along this side of the city, so enjoy the fresh air away from the tourists while you can.

The Ezelpoort Gate – Built on an embankment along the canal, this gate is referred to as a so-called watergate.

The Gentpoort Gate – Located on the old road to Ghent, hence its name.

The Kruispoort Gate – This gate has seen some changes over the years as the original structure was once much larger.

The Smedenpoort Gate – Over the years this gate has also seen some changes. Initially expanded but then destroyed by an explosion, it then went under renovation in the late 1900’s. 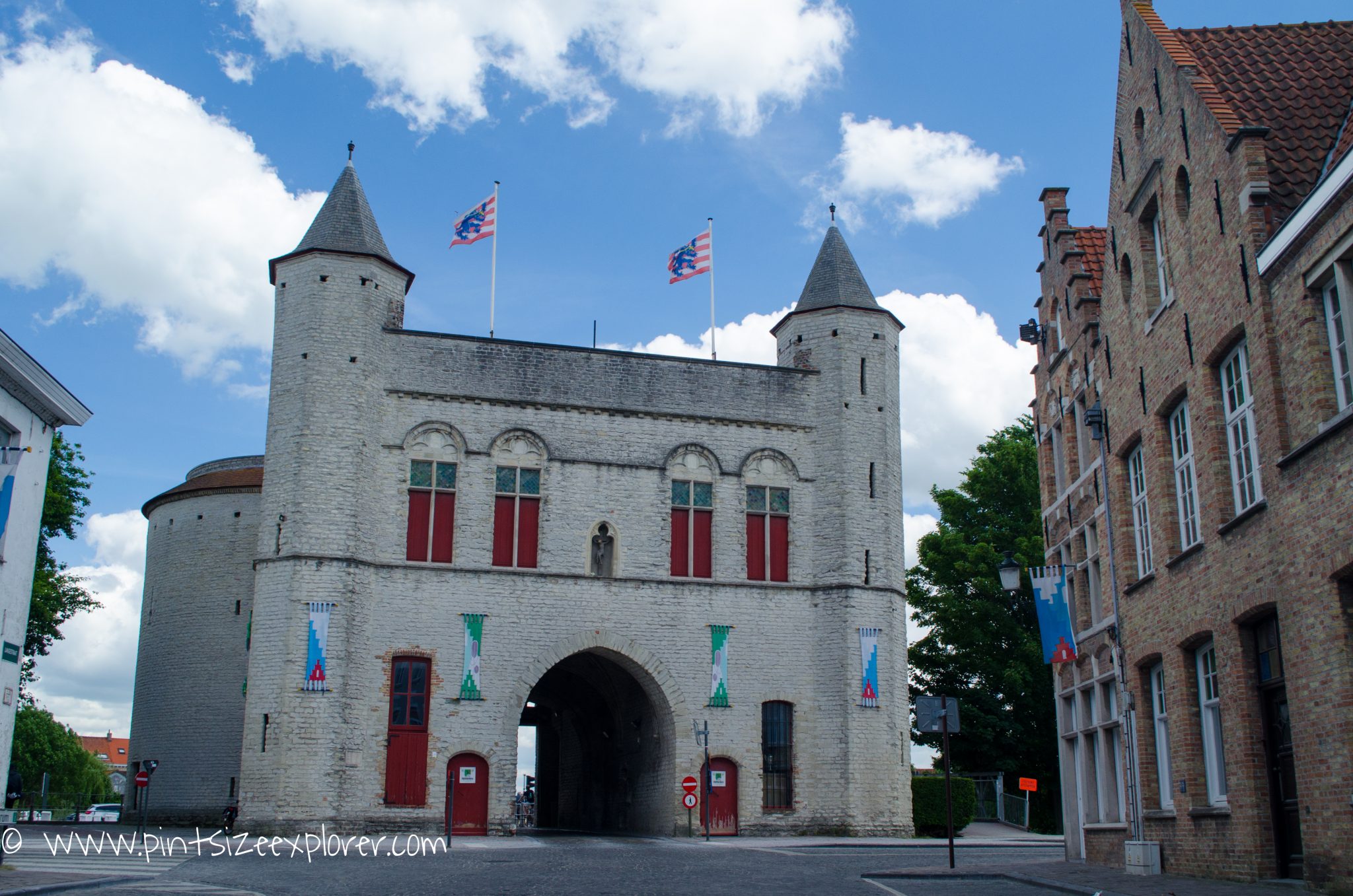 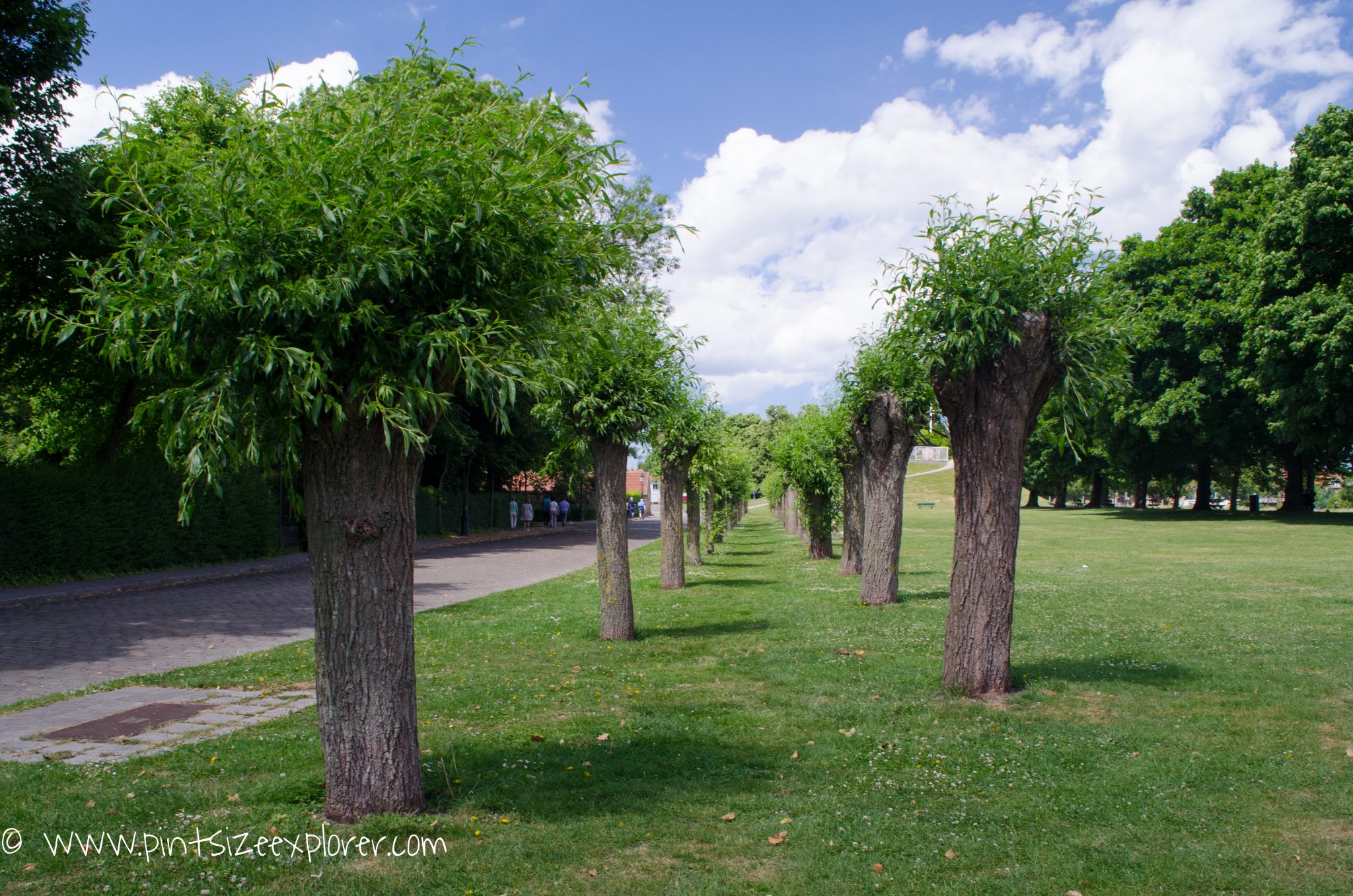 We decided not to visit this museum as we had already taken a tour at The Halve Maan Brewery, but it did sound like it would be worth a visit. With an interactive guide in the form of an ipad mini, you’ll learn about the history of beer, and your ticket will include three 15cl beer tastings from a selection of 16 different draught beers. Tours cost €9pp or €15pp including the tasting sessions.

It started off as a joke but then I actually went and bought something from one the many lace shops scattered across the city. Handmade lace items, including pillows, linen, and clothing, can be purchased and make a great holiday memento. I’m not entirely sure why, but there seemed to be an overwhelming choice of pillows for sale that were decorated with animals dressed in human clothes. You should know by now how much I love dogs, so this seemed like a hilarious gift to bring back for my new home with Adam. 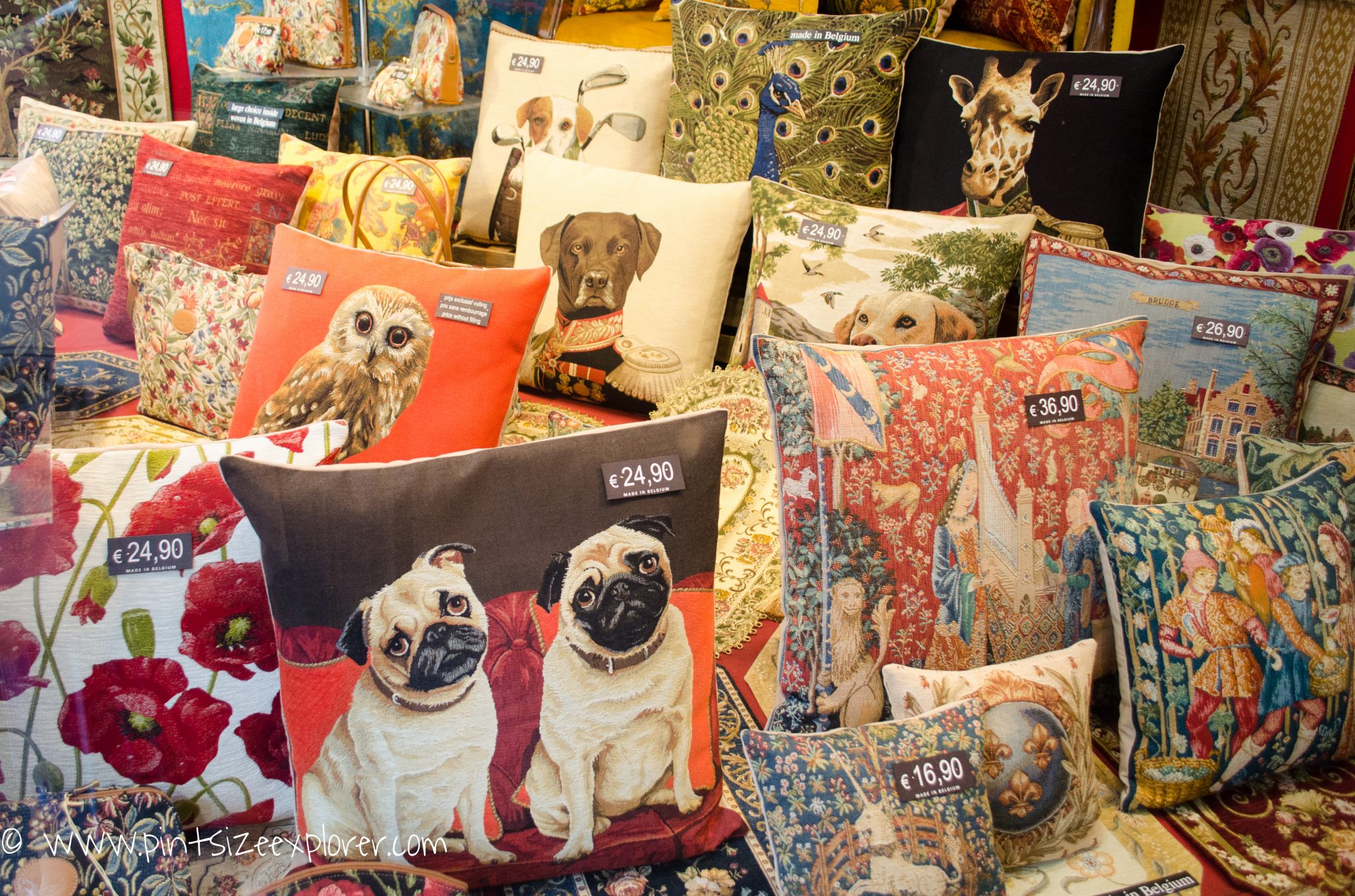 Explore the outer city by foot to see some seriously picturesque streets and houses. Make a beeline for Rolweg and Carmersstraat streets which you can easily pass on your way to or from the windmills.

If you still have time on your hands, or fancy heading out of the city, then make sure you check out the 65 km of coastline Belgium has to offer! Stay tuned for my next Belgium blog post coming soon, in which I’ll talk in more depth about the coast 🙂