Trekking From Kalaw to Inle Lake

The Five Villages Of Cinque Terre

A Little Piece Of Devon

As someone who travels often, I rarely choose a UK based get-away and I’ll be the first to admit that I am guilty of not knowing my own country half as well as I should! Sure I’ve visited most of the big cities (Manchester, Edinburgh, Liverpool), and several smaller towns (Bath, Brighton, Cambridge), but it’s the traditional English villages that I really haven’t learnt to appreciate just yet. With plenty of coastal and inland towns such as York, Oxford or Norwich – all of which are within a 2-hour commute from London by train – why are we not making the most of our own beautiful country? 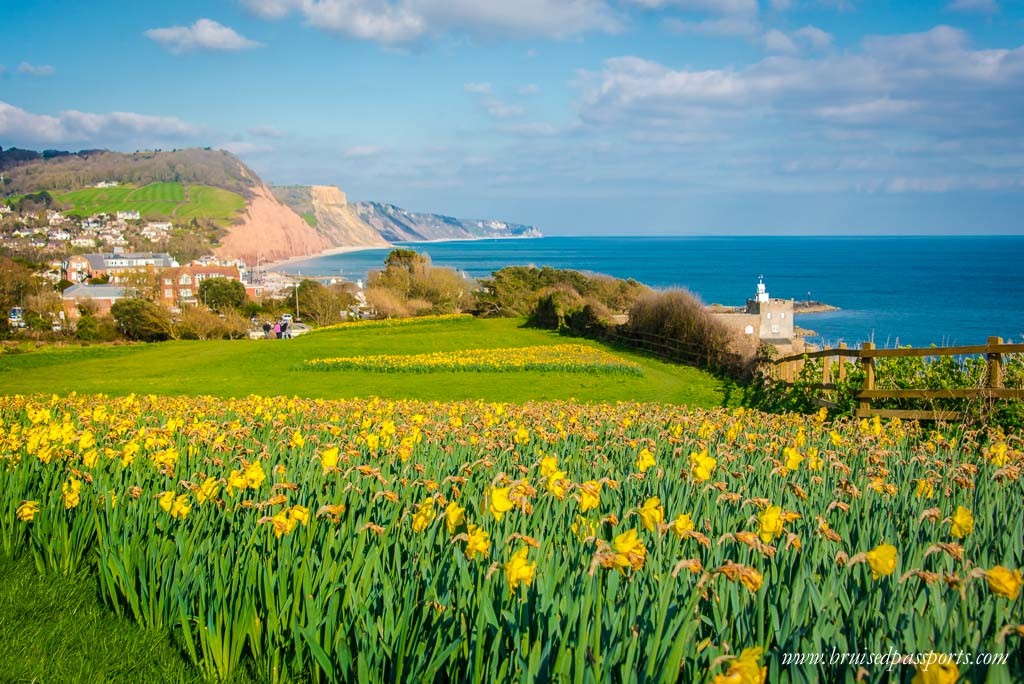 Last summer this is exactly what I did. I arranged a long weekend away to Devon as a surprise mini break for my close friend Gemma to celebrate her birthday. We were a group of 6 friends (3 couples) and a lovely dog called Rosie. I booked an amazing cabin through a company called Canopy & Stars who specialise in quirky and unusual styles of accommodations. With a huge range of options from glamping, yurts, rustic cabins, wagons, even treehouses, this website has some pretty astonishing places to rent! The website even features a selection of accommodation that featured on the channel four programme George Clarke’s Amazing Spaces – how’s that for something different! 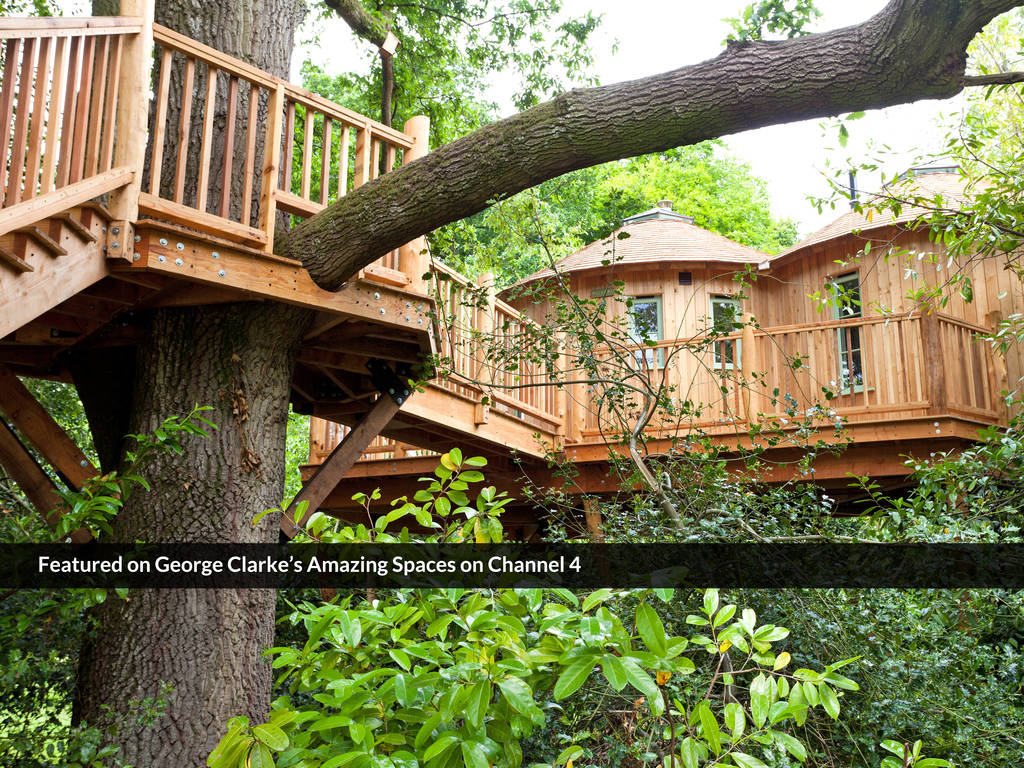 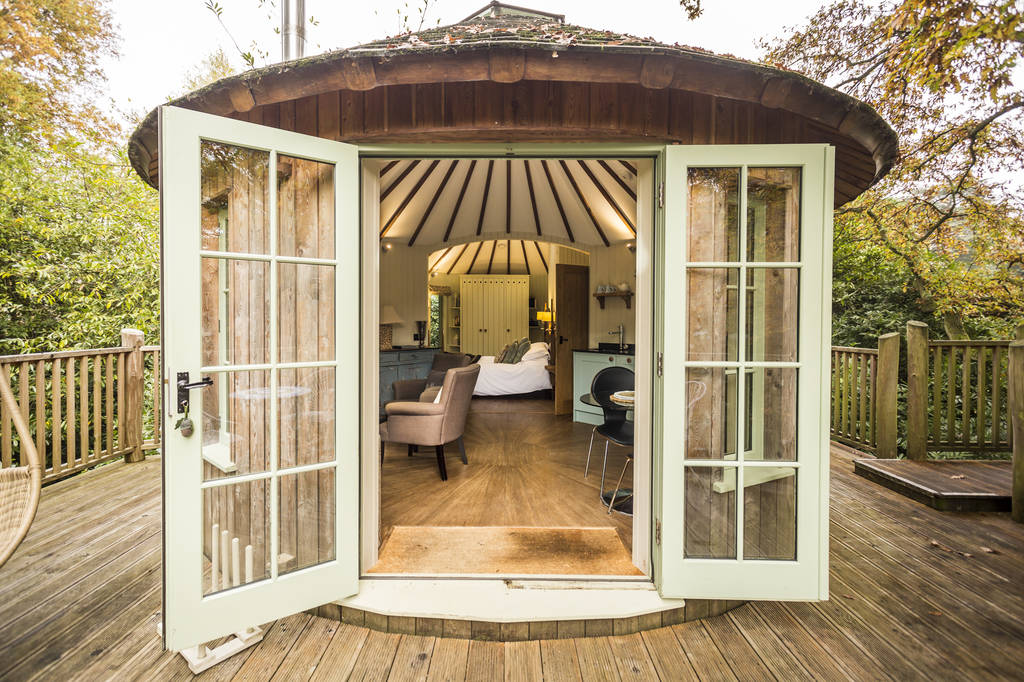 We stayed at the wonderful Candyland Studios, a creative space that was built using recycled materials situated just outside the town of Great Torrington. The cabin slept 8, had two king-size bedrooms, a twin room as well as bunkbeds. There was a large open plan kitchen, diner and lounge, as well as a recording studio and sound-booth which could be rented out for an additional cost. The cabin had decking outside with a bench and hammock, and there was even a giant teepee tent hidden on the land – perfect should you have a group of children looking for their own space. A lovely touch was the welcome hamper that was left for our arrival, complete with Devon clotted cream and fresh scones. Yummy! 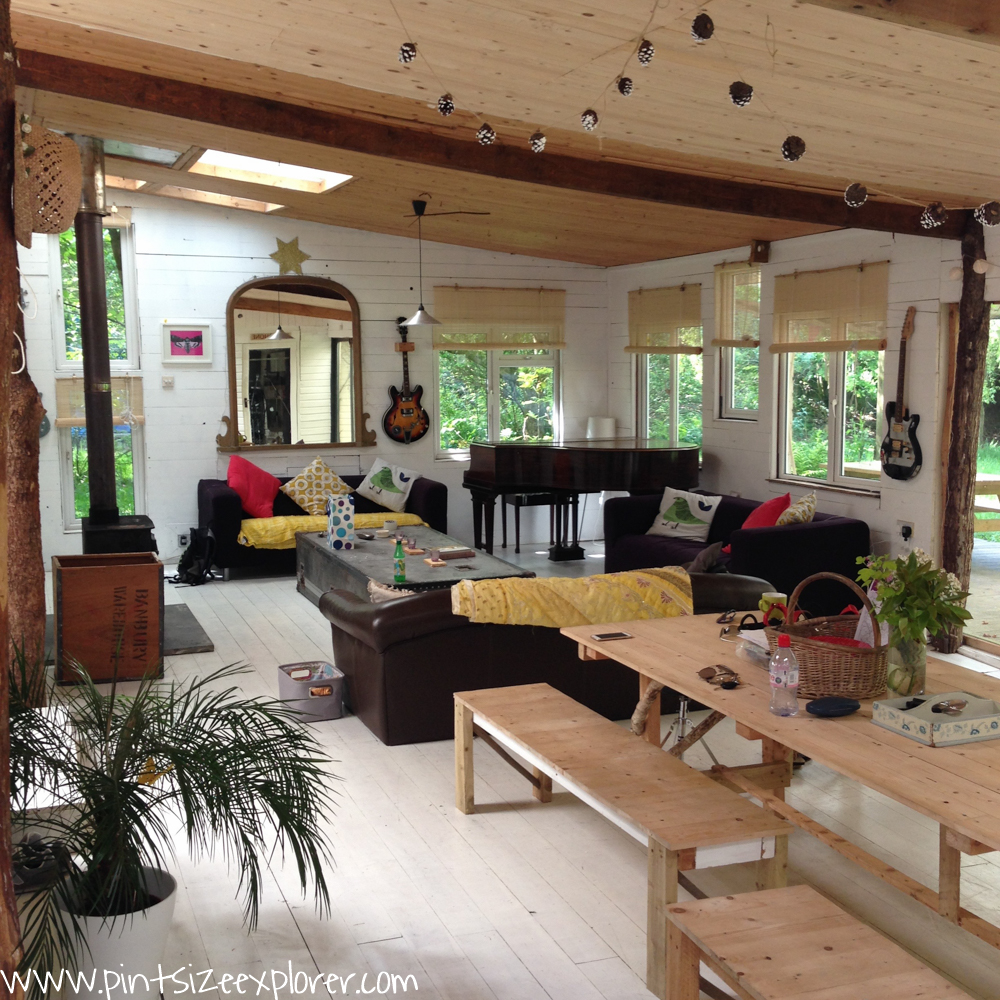 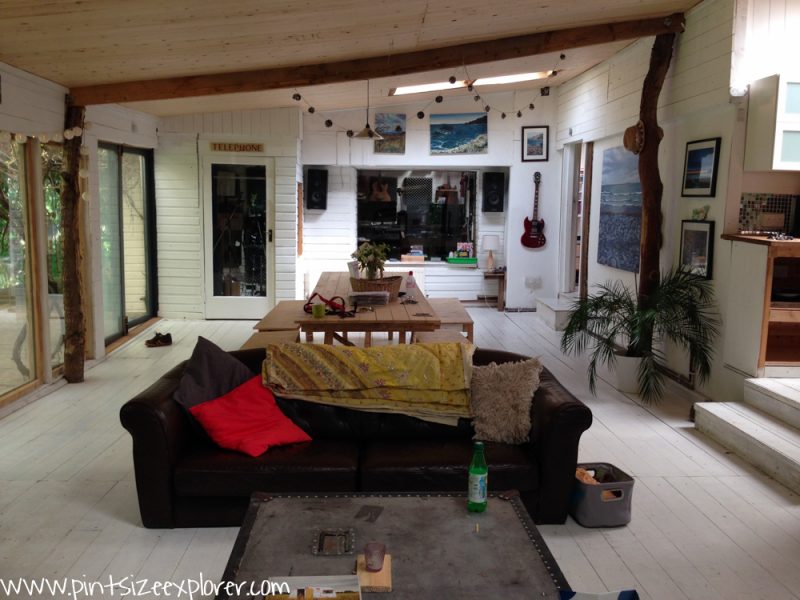 Set in the middle of the country with the nearest high street 6 miles away, this was a far cry from the city life I am used too. Fresh air, open fields and not a sound anywhere (except the for the birds and Rosie dog) – this was the perfect escape for the weekend. 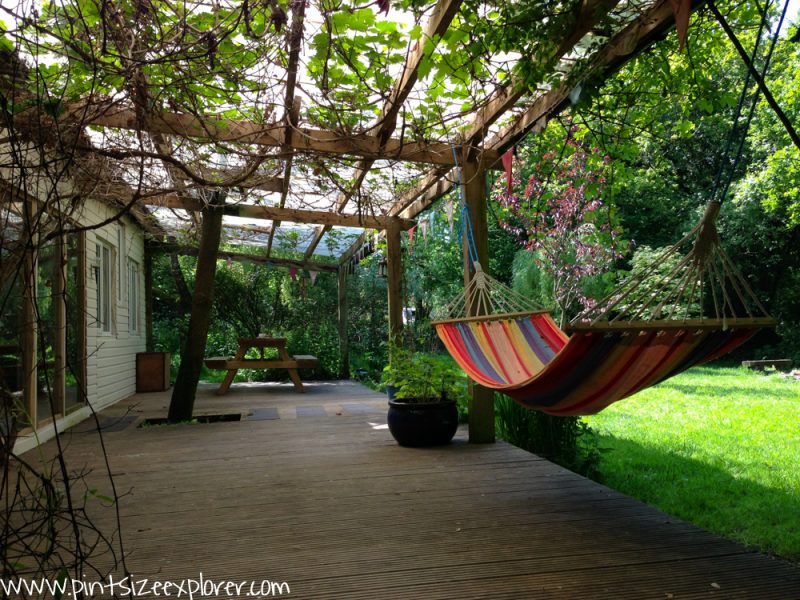 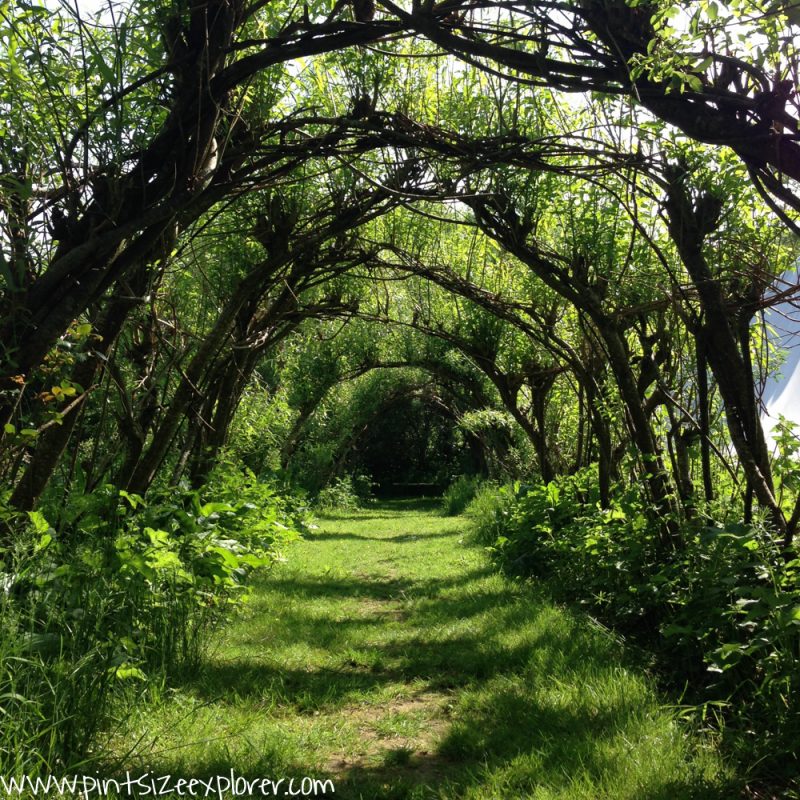 Devon is a special location for Gemma. Not only her favourite place in the UK, but also the place she chose to get married a few years ago. With loads to do, our weekend was filled with cycling, beach time, and most importantly, relaxing. We lucked out with the weather and our weekend was full of glorious sunshine, so the first place we visited was the village of Croyde where we headed straight down to the beach. 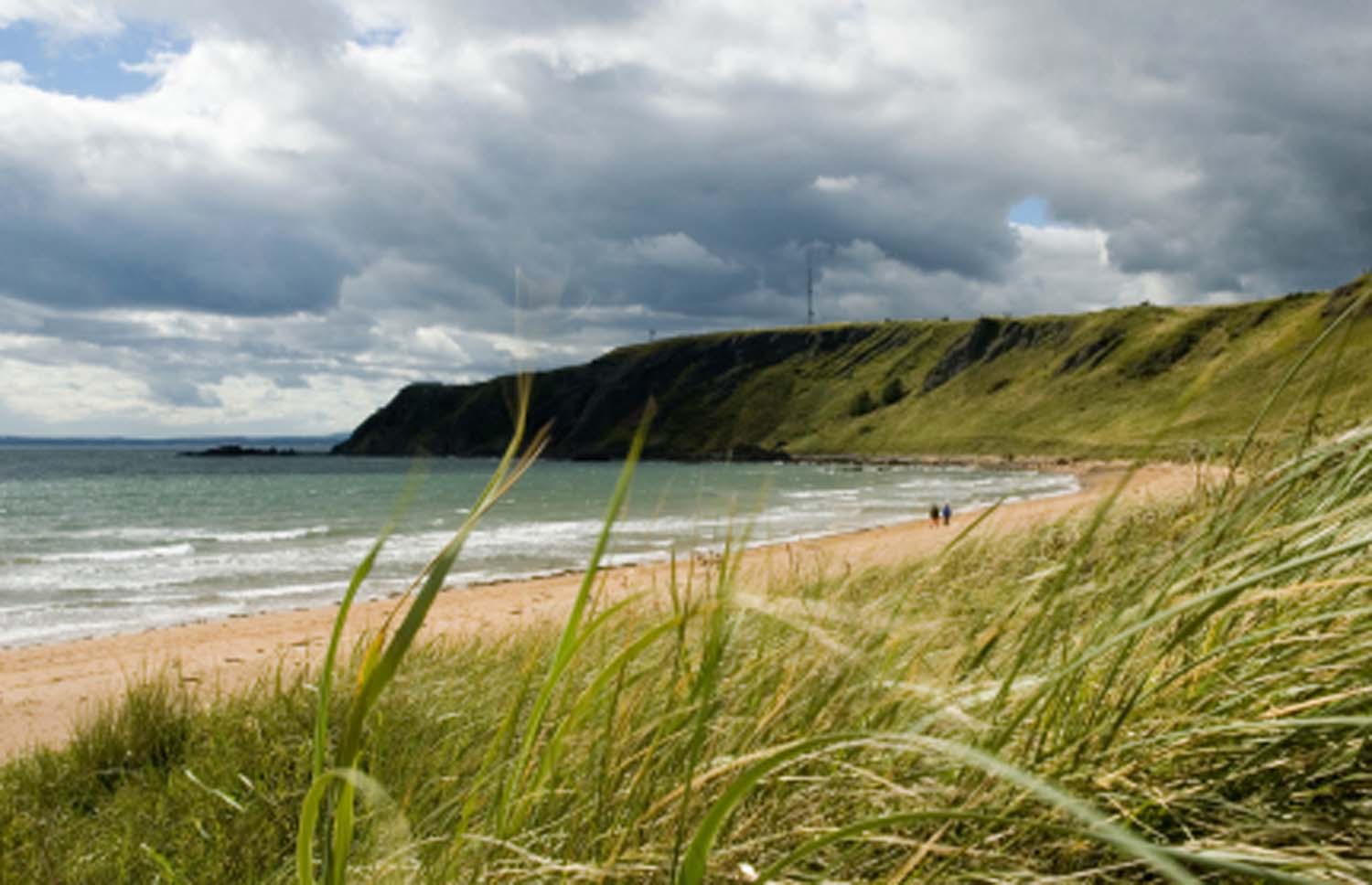 Set between Sauton Sands beach & Woolacombe beach, it’s not difficult to see why this picturesque golden sand beach remains a firm favourite for visitors. The beach was bustling with action! There were families huddled under their sunbrella’s, friends playing ball games, kids of all ages queuing for a Mr Whippy 99p ice cream, oldies camped out in their fold up chairs and a general buzz of summer happiness. 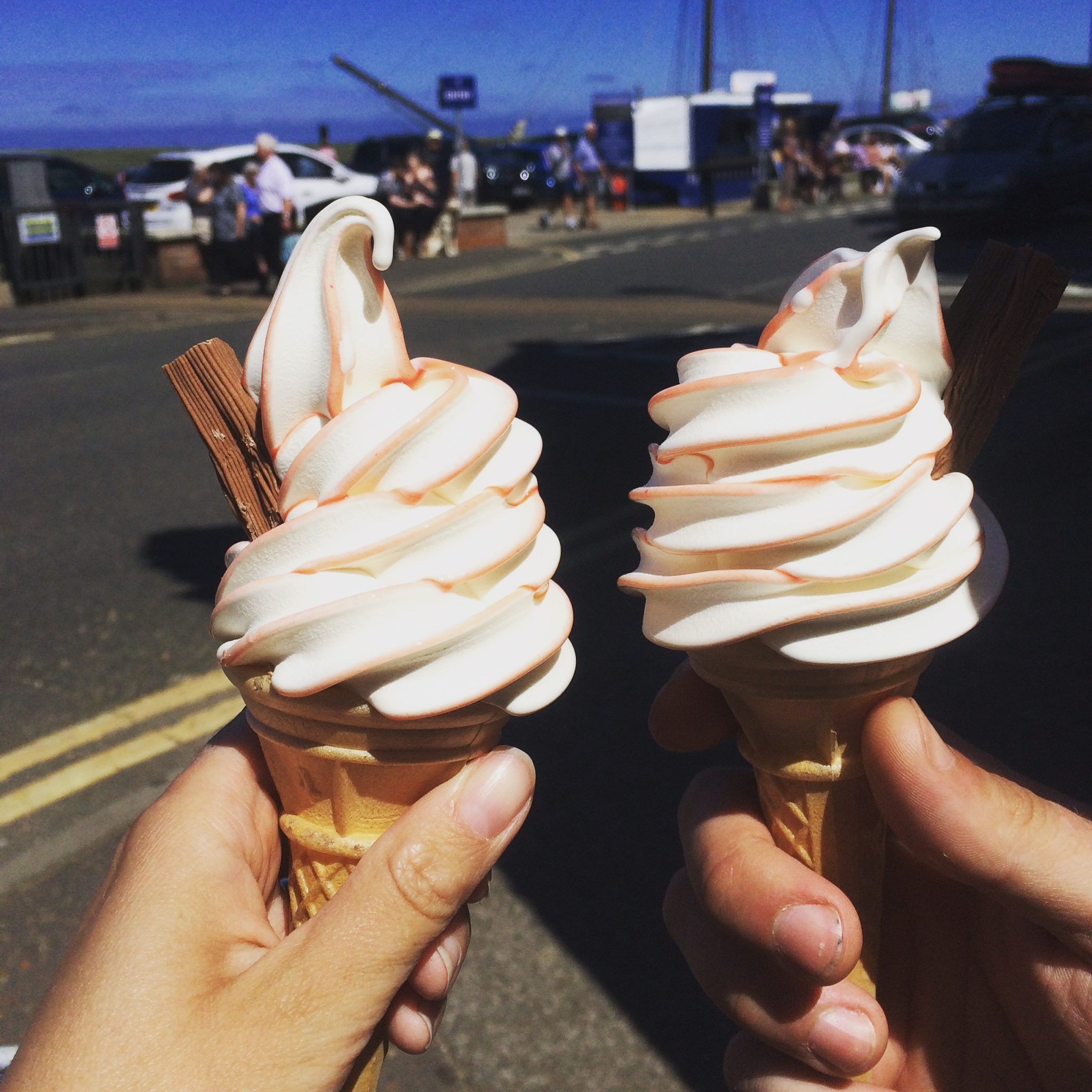 Croyde is renowned as one of the best surf spots in the UK so perfect for all surf enthusiast’s, and with a number of different surf schools dotted around the village, this is a great place for beginners to learn to surf too. Don’t surf? Then why not try your hand at paddle boarding, body boarding or kayaking instead? I never thought I’d experience such a surf vibe anywhere outside of Australia, but this is it, here on our English shores. 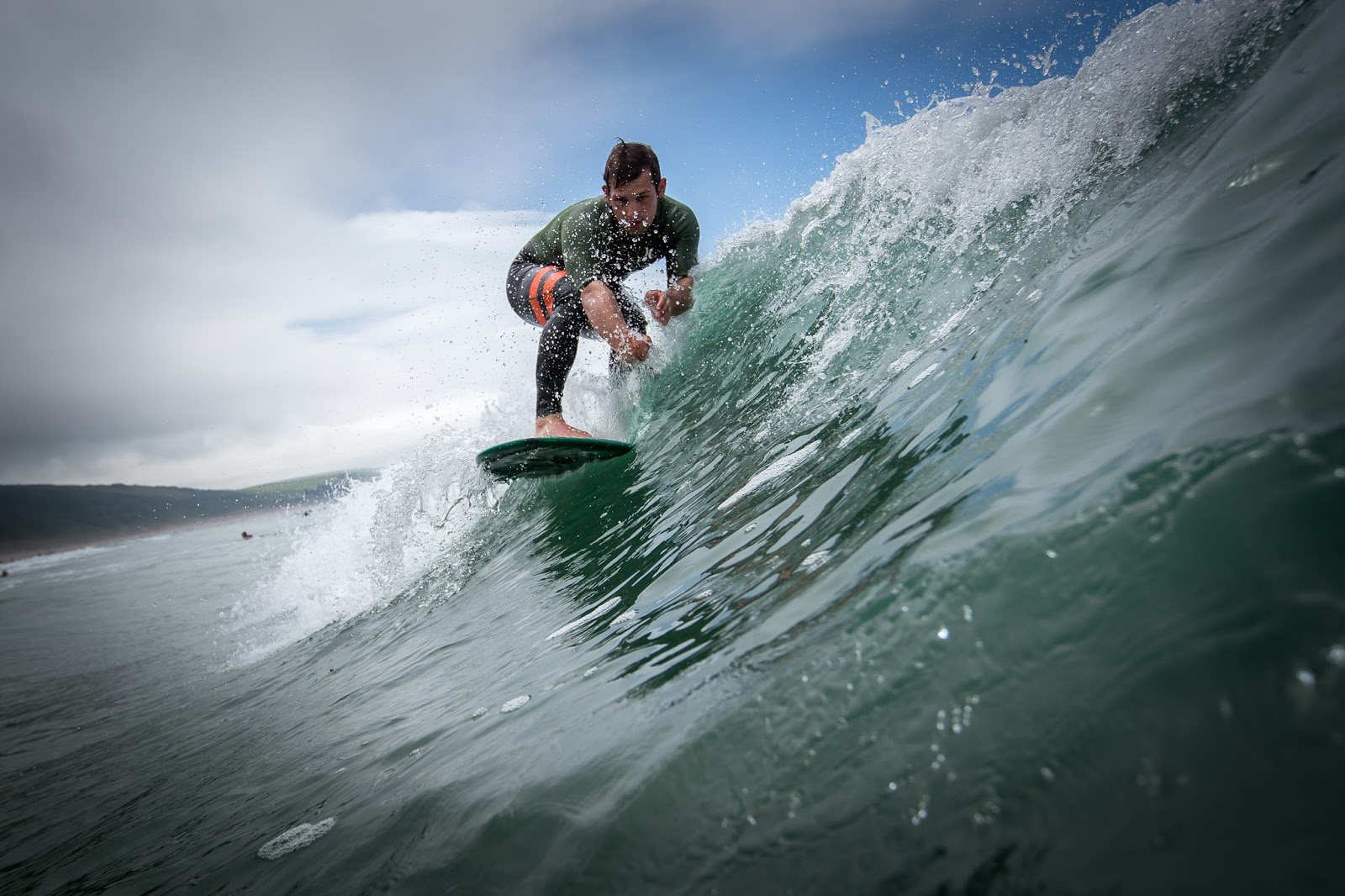 Worth a mention for dog owners, but dogs aren’t allowed on the beach during peak season which runs from the 1st May through to the 30th September. Not so great if you want to visit during the summer (although understandable when the beach gets so busy!), but a wonderful option for Autumn, Winter and Spring seasons instead. 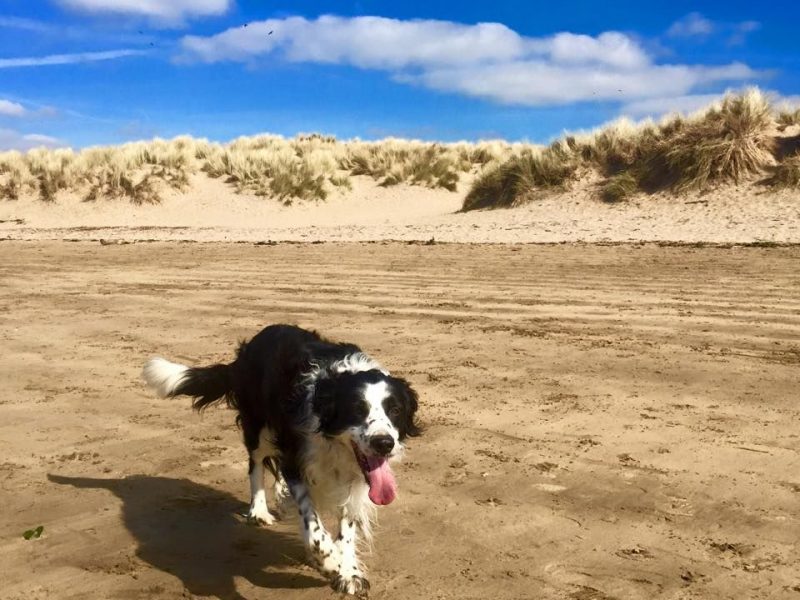 The village itself might be small, but is filled with a number of different accommodation options from hotels, b&b’s, campsites and holiday parks. There were several ice cream shops, surf shops and independent little shops, as well as an abundance of places to grab a bite to eat. A favourite of ours is The Thatch. A pub with a vibrant atmosphere offering local ales, great pub grub, the occasional live music, and also offers a choice of four different style b&b rooms. 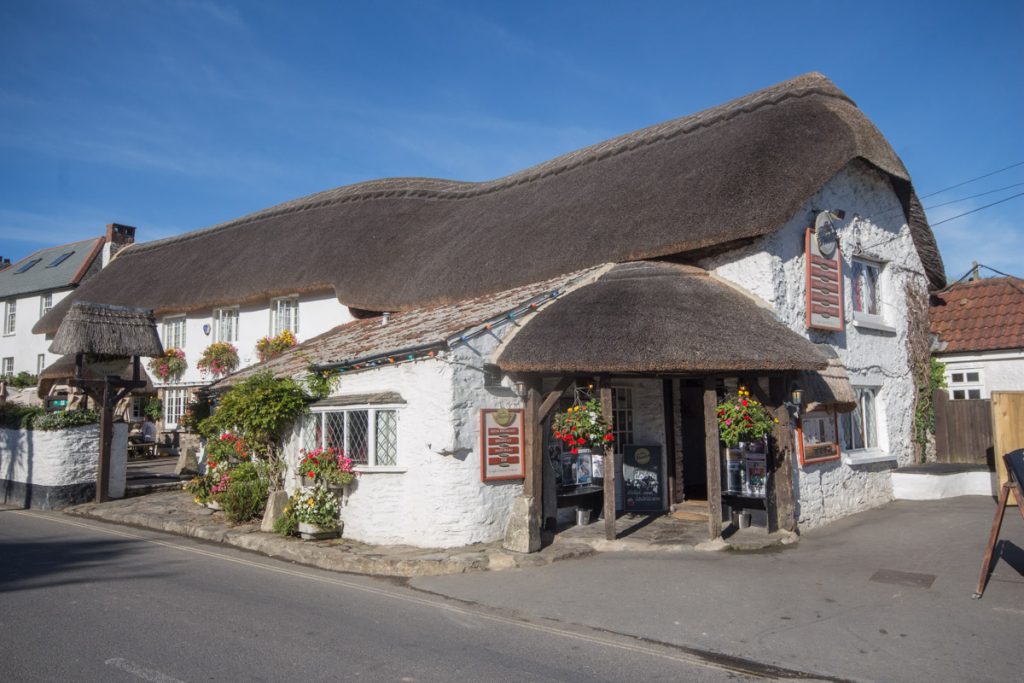 Alternatively you can pick up an ice cream at the Croyde Ice Cream Parlour, but don’t be put off by the queues, it’s worth the wait (I highly recommend their mint choc chip!). For a lighter bite (and typically British), then pop over to The Old Cream Shop and Tea Garden, which is a cute little place serving fresh pastries or scones and cream. I haven’t personally been here yet, but next time I’ll try and pop in. 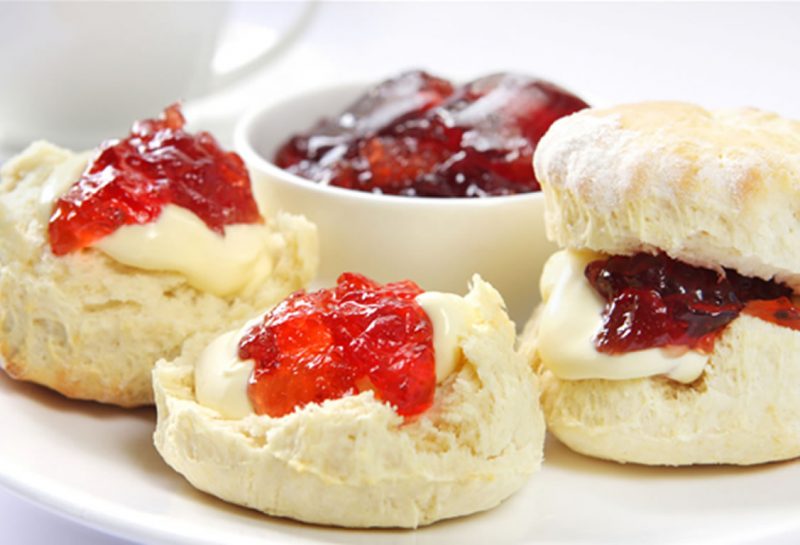 On our way back to the cabin we drove through the village of Woolacombe, another popular beach along the Devon coast where I had visited the year before with another group of friends. Also filled with surf shops, local businesses selling their hand made trinkets and even more fish & chip shops, we stopped by Fudgies Bakehouse for fresh pasties. 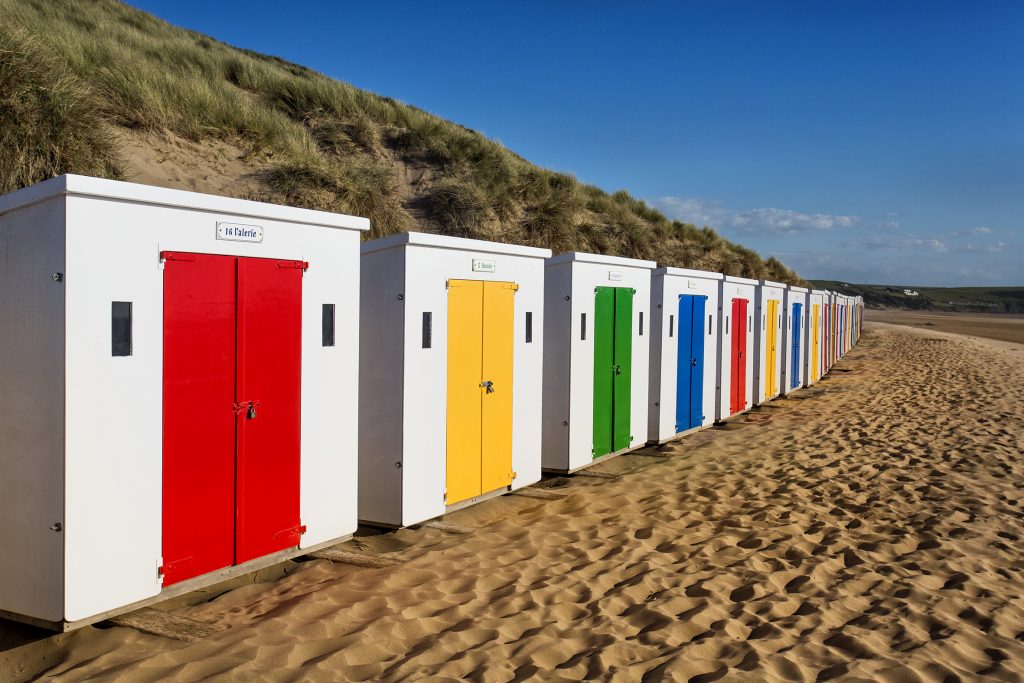 The attractive part of staying somewhere self-catering is being able to bring all your own food. Our cabin had a fully functional kitchen, so we did a big food order and arrived with a car full of food, nibbles and drinks that worked out as minimal cost between us. You could always consider ordering online and having a food shop sent to your accommodation directly for ease too. That evening we lit a bonfire at our cabin and I learnt how to build a fire – lots of twisting branches and acting macho if you ask me! With a roaring fire lit, music playing and drinks flowing, the boys cooked our homemade burgers amongst everything else, and we settled in for a night of celebrations. 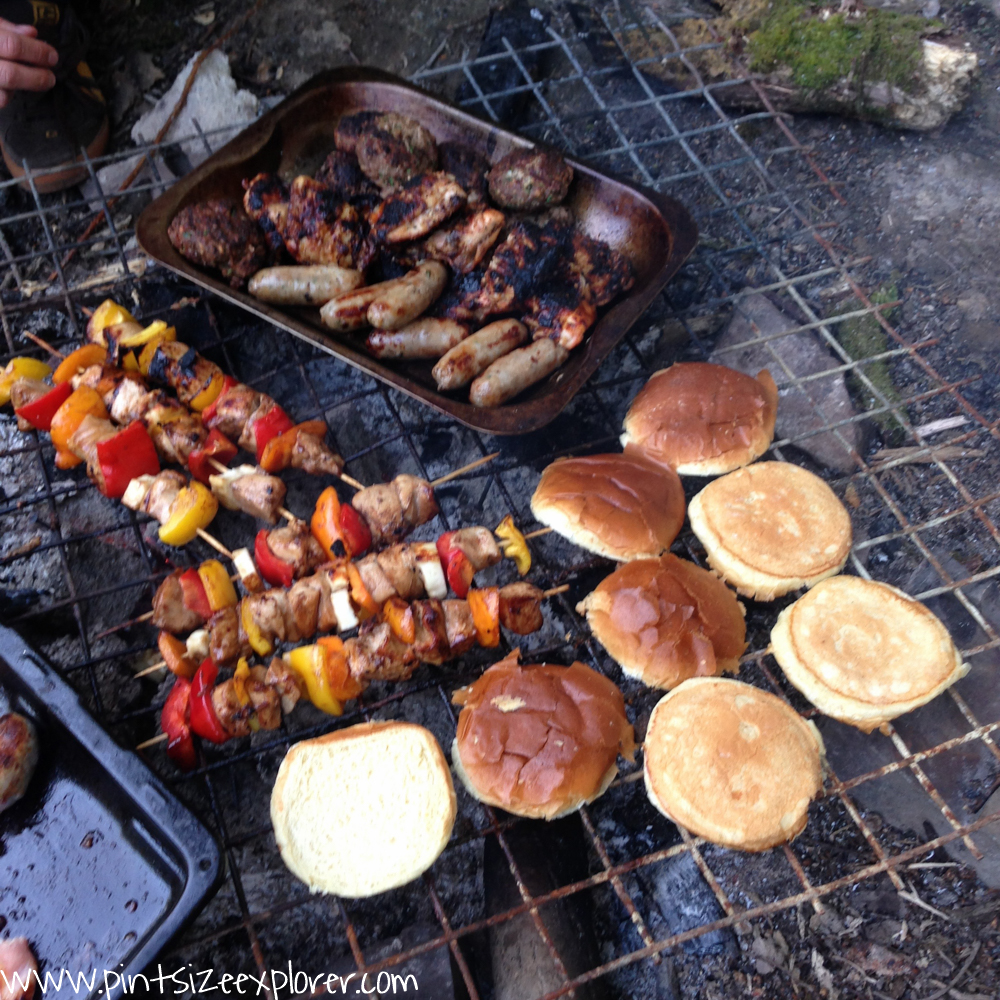 The following day we loaded our cars with our bikes and set off to explore the Tarka Trail which was somewhere I was really looking forward to visiting. Set between Braunton and Meeth, this former railway line covers 31 miles of traffic free cycling and walking – amazing right! For those without bikes, fear not as there were several bike shops around the trail where you could hire bikes on either a half day or full day rate. We passed people of all ages walking, running, cycling and out with their dogs – for me, this was one of the many highlights Devon has to offer. We cycled out through the gorgeous countryside and stopped at a local pub for lunch and a pint before heading back. 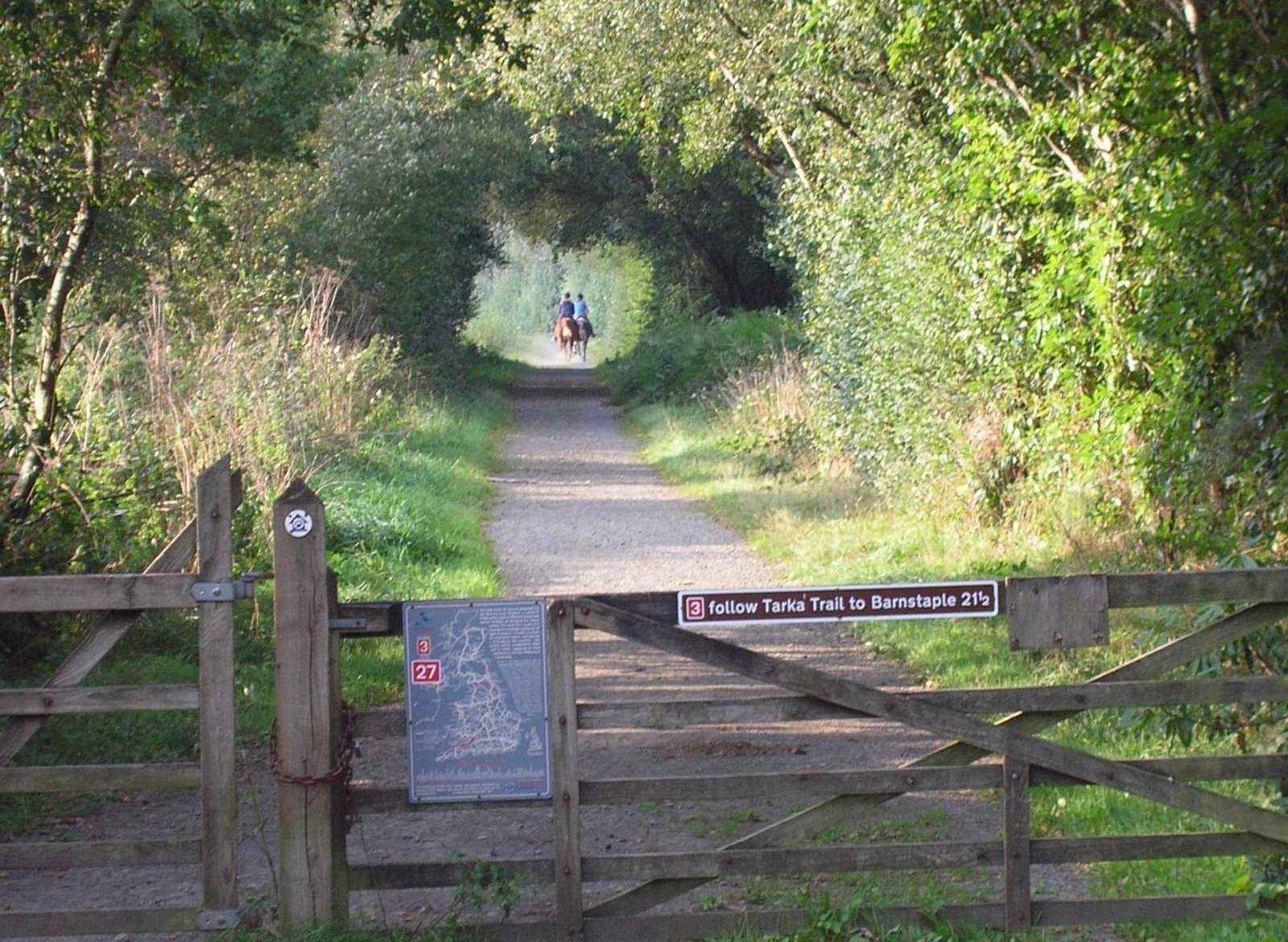 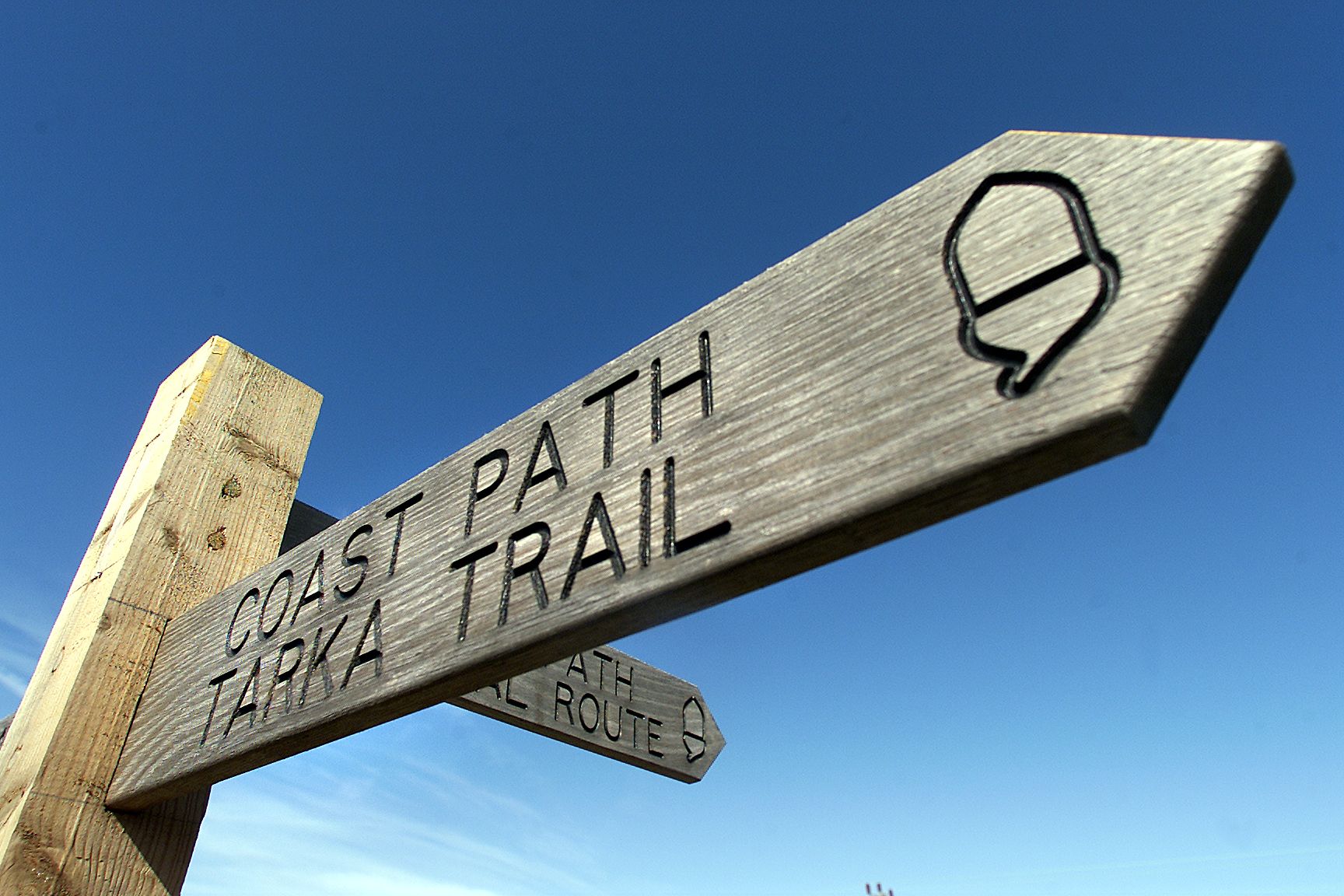 There are also many walking paths and trails set between the beaches, countryside, and villages. One walk in particular that I would have liked to have done if we had more time, was the circular walk from Baggy Point to Woolacombe. This 10-mile stretch that passes along the coastline taking in some breathtaking views.  Dog owners will be pleased to know this is a dog friend trail, so bring your four legged friends with you! 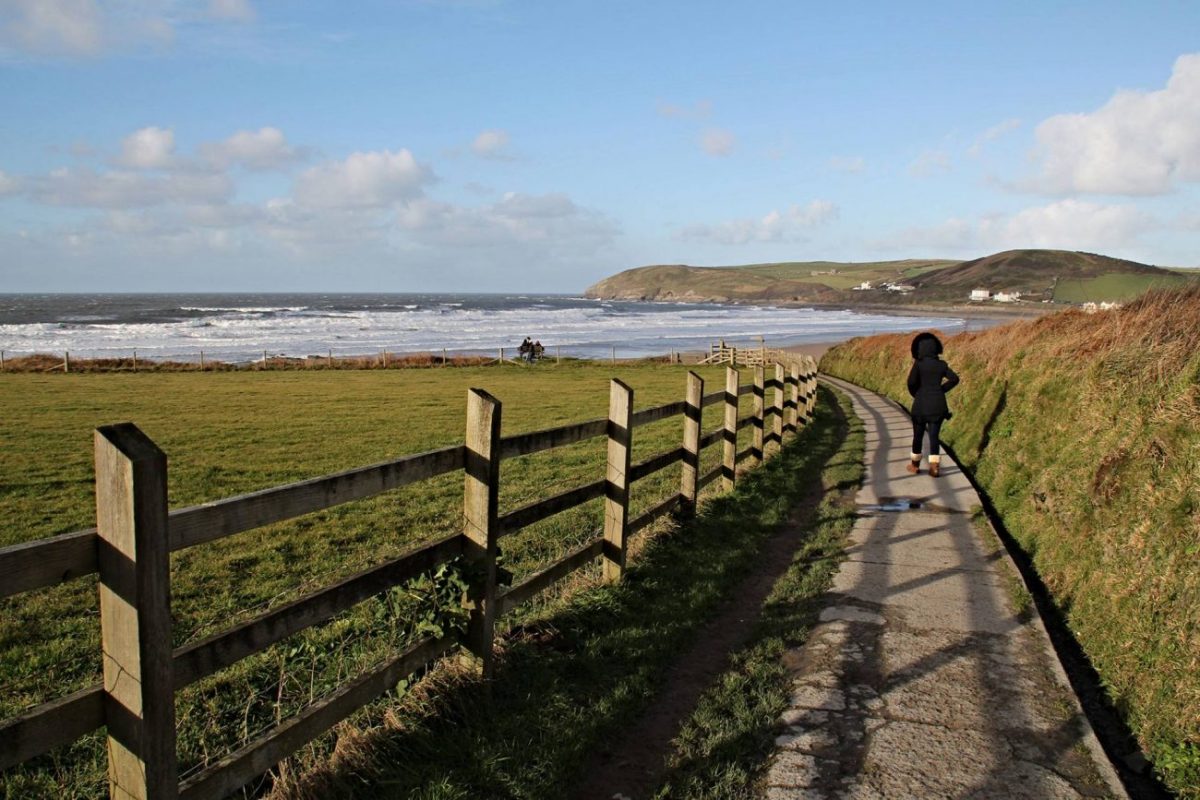 On our second evening we decided to eat out locally and visited Monty’s Caribbean Kitchen based in Barnstaple. Monty’s were actually the caterers for Gemma’s & Alex’s wedding the summer beforehand, so this was a lovely treat for them to catch up with owners and see how their small family run restaurant had grown. For the best curries and cocktails in town – make sure you visit Monty’s! 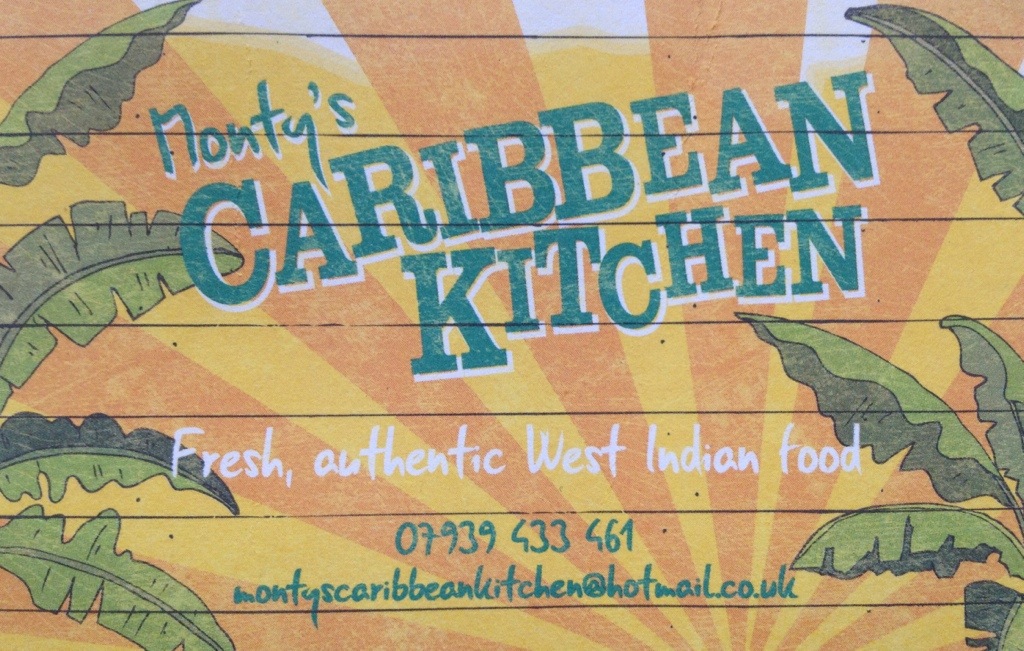 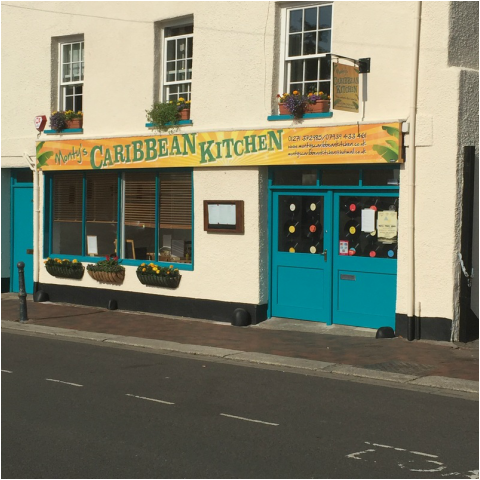 The weekend was so much fun and somewhere I’d love to visit again. I’ve been reminded that holidaying isn’t always about jetting off, and you can have just as much fun a few hours drive or train away from home. Next on my list is Norwich! I hear the beaches are splendid there throughout the year, I’ve found a cycle route for us to have a pootle along and I’ve even seen some quirky places to rent via Canopy and Stars too!