A Little Piece Of Devon

Trekking From Kalaw to Inle Lake 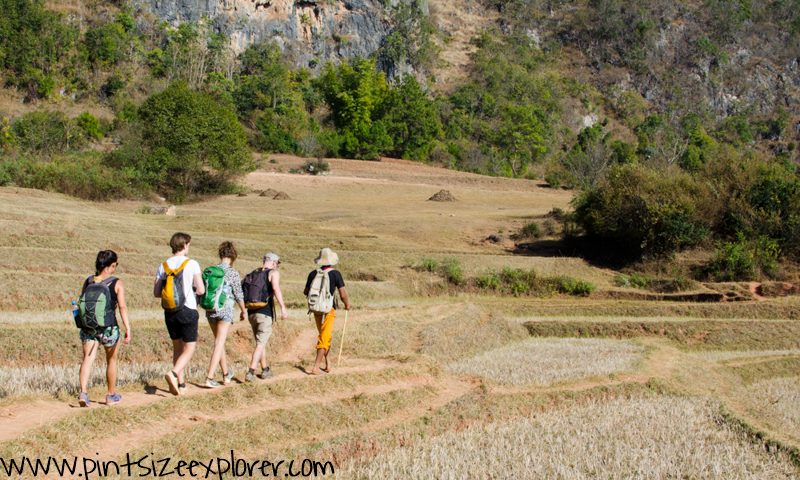 One of the most popular ‘must do’ activities in Myanmar is trekking, something that I’ve wanted to do for a long time, so we made sure to include this in our itinerary. The route between Kalaw and Inle Lake sees groups of people head off into the nearby countryside for daily and overnight treks. With a basic level of fitness required, there are a number of different trekking options available including daily treks to the outskirts of Kalaw, as well as the ever popular overnight treks from Kalaw to Inle Lake.

We landed into Heho airport where we planned to take the local train to Kalaw, a small town the west of Inle Lake. Despite being notoriously unreliable, we wanted to include some local travel within our trip, as it’s a great way to gain an insight to the everyday life of the locals. 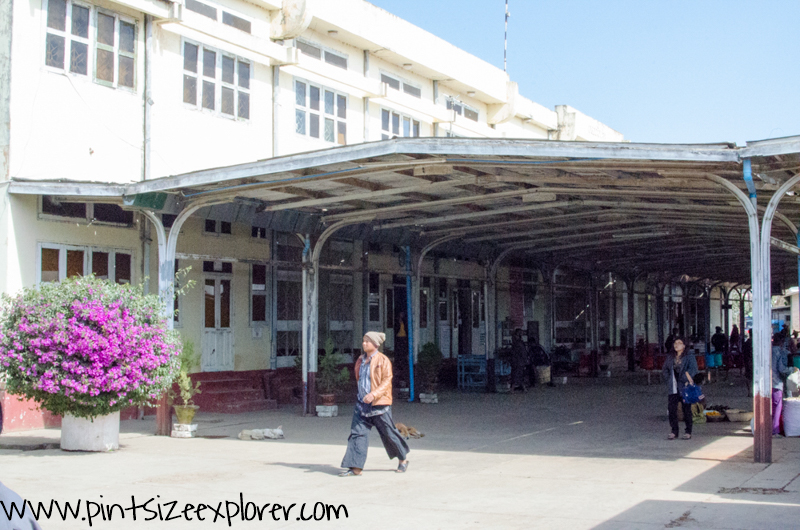 A train was due to depart an hour after we landed, however several of the taxi drivers tried to scam us by saying the trains weren’t operating so they could drive us all the way to Kalaw. After a tiresome debate, we were eventually taken to the station where not only was the train running, but it actually arrived early – surely a first for Asian trains?.

With a matter of minutes to buy our tickets, get some drinks and go for a pee, the lovely man in the ticket office surprisingly held the train for us until we were ready to go. Despite speaking no English, the wonderful man was super helpful and even carried our bags on to the train for us. The train was basic yet spacious, clean with only a handful of other passengers, and made for a pleasant two hours of travelling through the glorious countryside.

Local travel is always entertaining and our journey was no exception taking into account the local lady and half her market stall who sat opposite us. We must have been lucky as we encountered no delays or problems with the train, and considering the cost at just a few dollars each, this was an excellent way to reach Kalaw 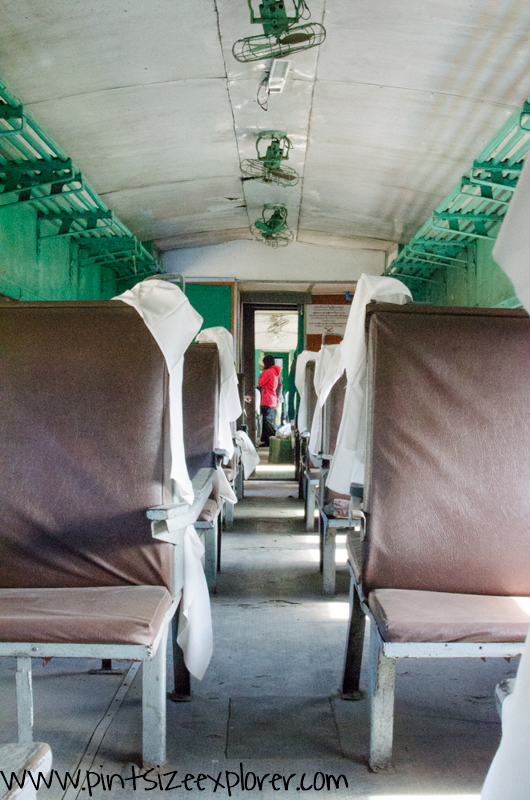 At various stations along the way, passengers would come and go including large families with small children armed with copious amounts of bags and sacks presumably full of food. Local ladies walked the length of the platform to sell fruit or other local produce. My friend Claudia who I was travelling with is always on the look out for a fresh fruit, and was more than pleased with her purchase of two fresh oranges which were passed through the train windows to her. 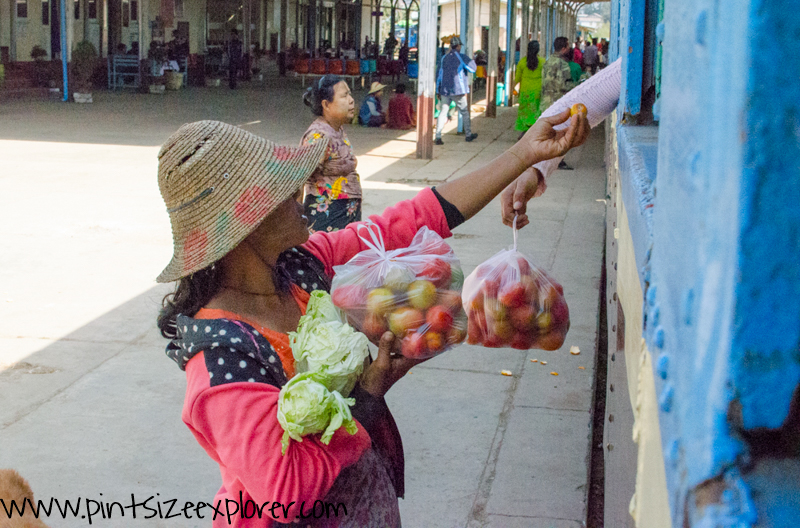 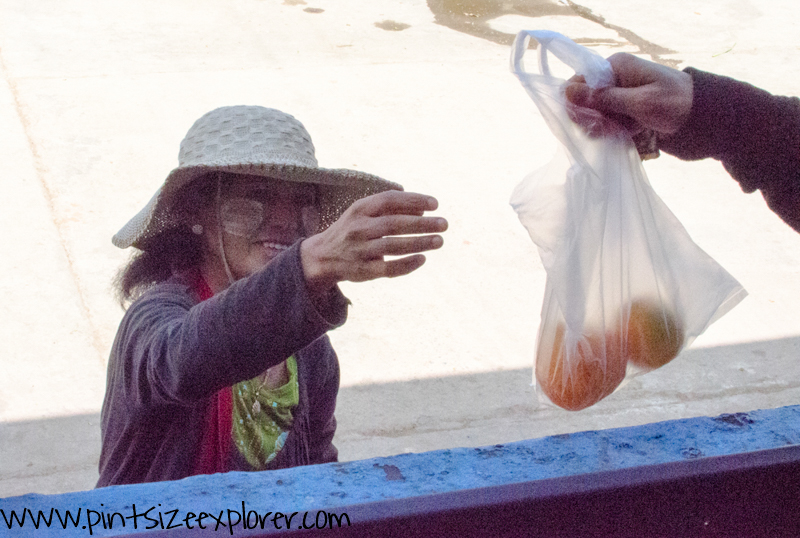 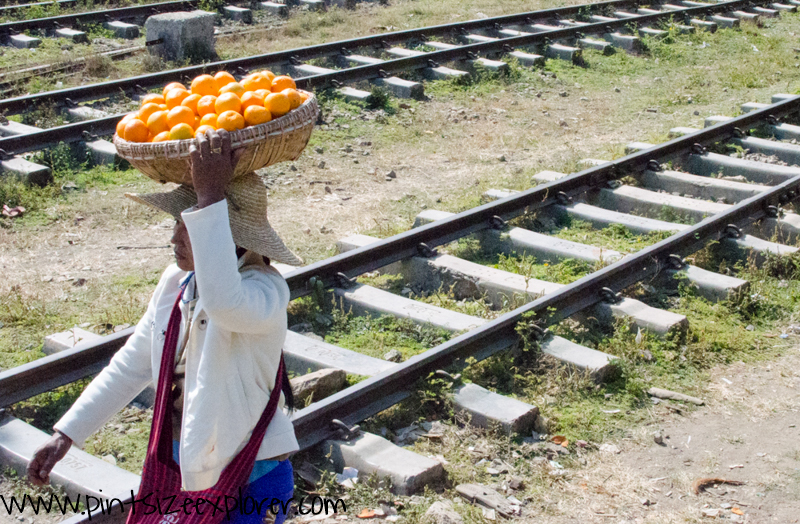 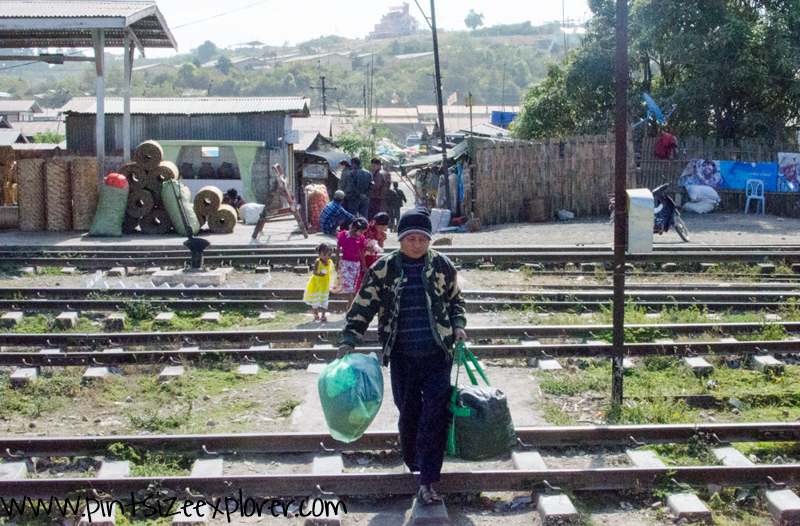 The train journey itself was otherwise uneventful. The views of the countryside were wonderful, giving us a glimpse to a similar backdrop that we would be trekking through over the next few days. 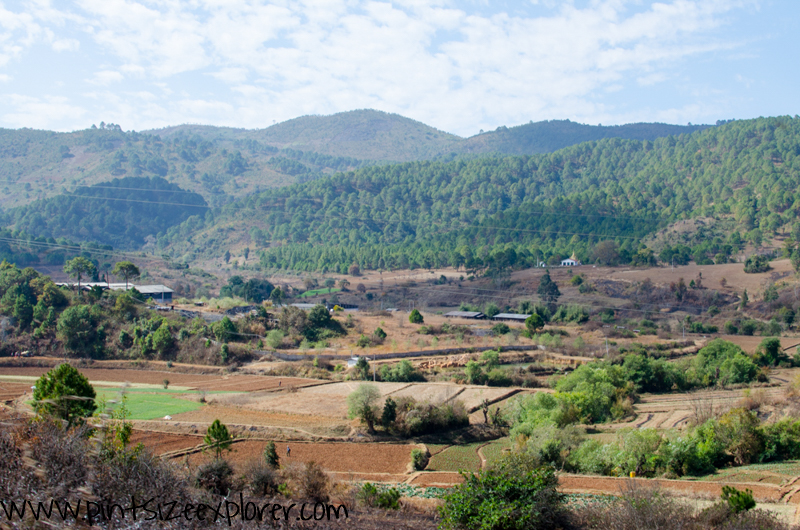 We pulled into Kalaw a few hours later, a small town that is based around a cluster of busy roads filled with market stalls, restaurants, shops and countless tour providers offering similar trekking excursions. We made our way to our guesthouse Thitaw II, run by Dutch born Marc, which cost us £14 per night for a lovely room that overlooked the surrounding hills. Once we had dumped our bags we headed back to town to arrange our trek for the following day.

With so many tour companies to choose from, we relied on our trusty travel bible (and by ‘bible’ I obviously mean Lonely Planet) for a few recommendations. We opted to book with Sam’s Family Restaurant, a family business run from their local restaurant. Staff spoke good English and the ladies were super helpful explaining all the different excursions and routes we could choose from. If you want to find out more info before set off, you can reach the team via email here. 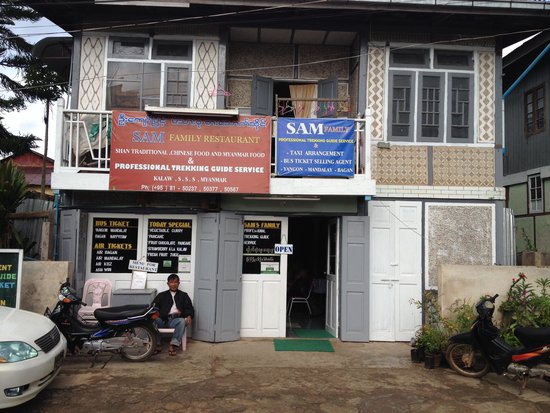 That afternoon we mooched around town visiting the local market and Thein Taung Paya, a viewpoint north of the town. Anyone feeling like they need their daily dose of temples can swing past the Hsu Taung Pye Pay temple or the dazzling Aung Chan Tha Zedi temple, covered in gold and silver mirrored mosaics.

Later that evening we enjoyed a hearty meal at the heaving Everest Nepali Restaurant followed by some local rum at the Hi bar. Possibly the smallest bar I have ever seen (or been into), this teeny tiny hole in a wall seated a handful of people around the bar with two tables at the front. With graffiti adorning every wall, it was evident that this bar had been visited by everyone and anyone from around the world – including a ‘cool granny’ apparently! Two locals sat at the front table took it in turn to play their guitar and sing a string of well-known songs where occasionally the rest of the bar would join in. This place was GREAT! 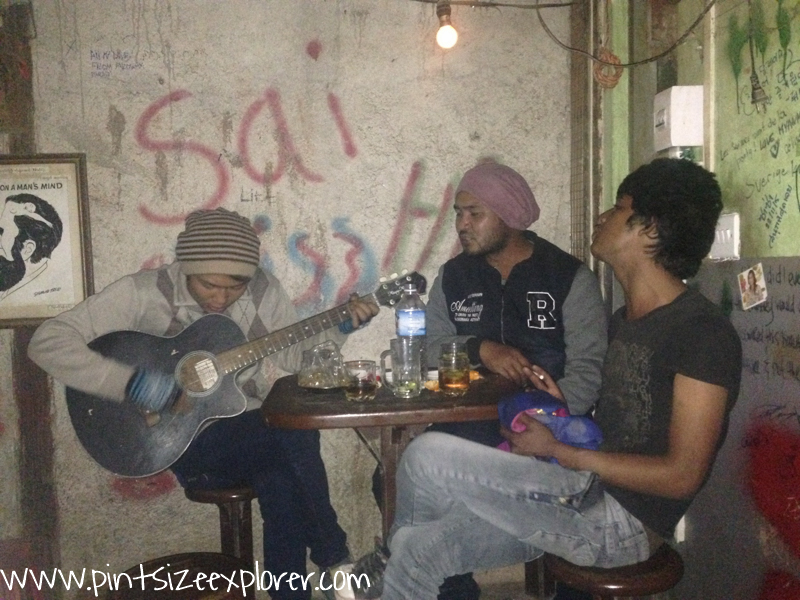 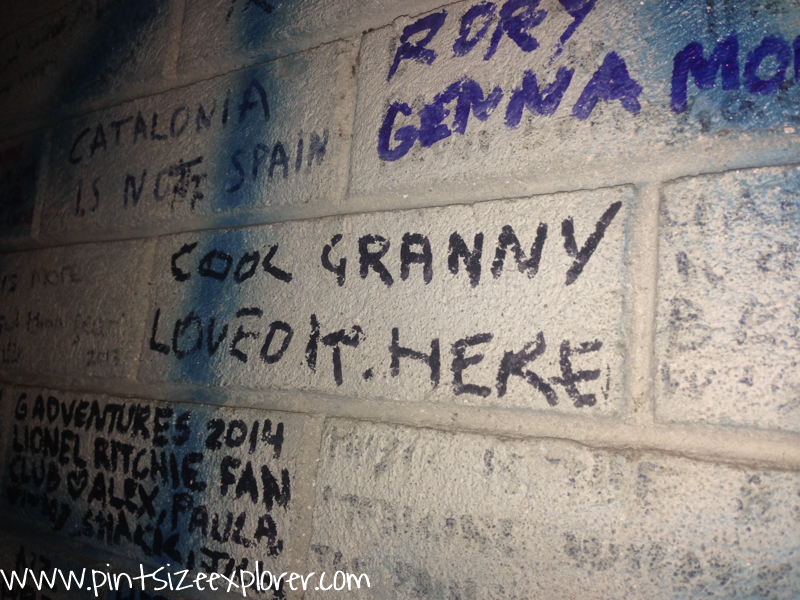 Time To Get Trekking

As we were short on time we opted for a two day / one night trek that would leave at 09:00 the following morning, arrive at Inle Lake by 16:00 the day after, and would also include one nights accommodation at a home stay. We lucked out with our trekking group and were paired with just 3 others of a similar age, all with similar interests – along with our guide Nam, a local Burmese man in his early 20’s. 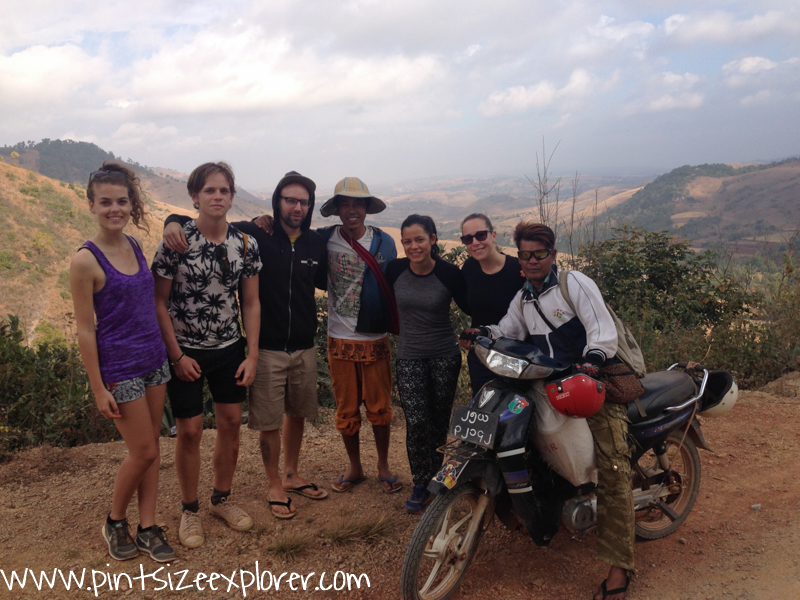 The trek wasn’t particularly strenuous, and took us roughly 7 hours of walking on the first day and 4 hours of walking on the second day. We passed through some stunning picture perfect countryside’s, rice paddies, vegetable plantations and a few local villages. The majority of our trek was along well trodden paths or small village roads. Out in the countryside we occasionally had to scramble over and around boulders as we veered off the beaten track on paths that only a local would know existed. 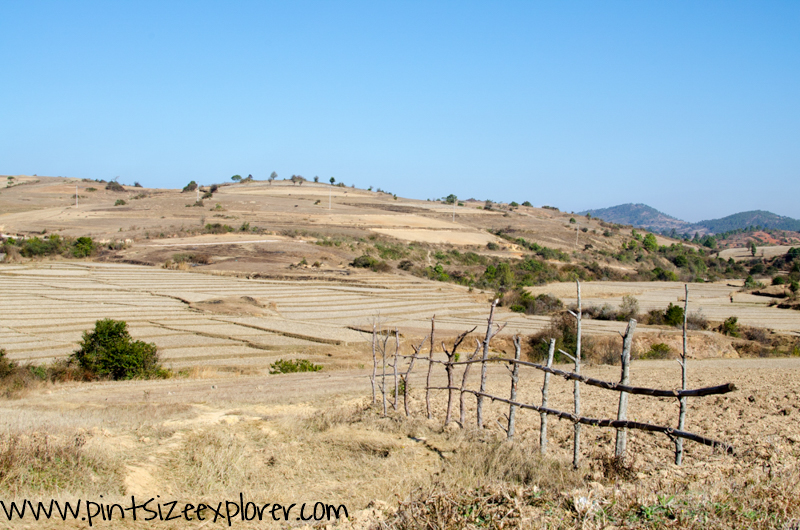 We met at Sam’s Family Restaurant where our backpacks were handed in and labeled up. These would be transferred for us to our accommodation in Inle Lake, which meant we were able to pack light with just our day bags full of our overnight essentials. We were driven out of town for approx. 40 minutes to a location that we would start our trek from.

Our first day of trekking went smoothly. The weather was mild which made the walk pleasant, and the day was broken up with a few pit stops at local villages along the way. We visited one local lady who was hand weaving something that would eventually be turned into a small bag to be sold a local market. 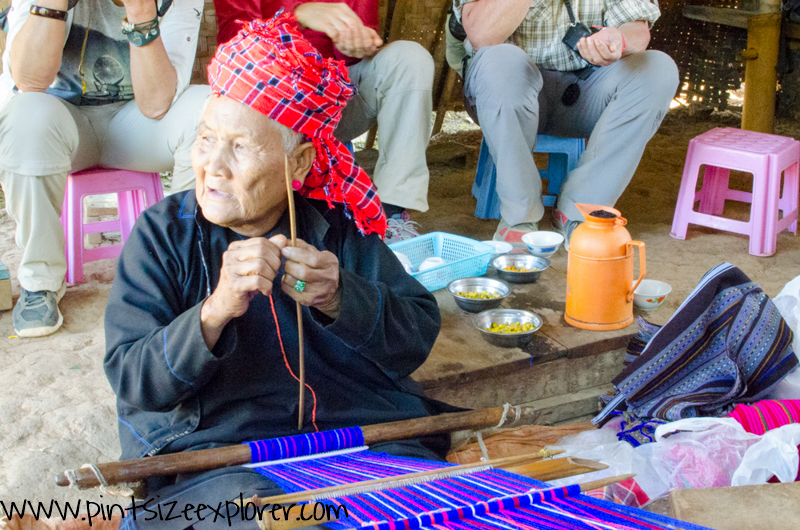 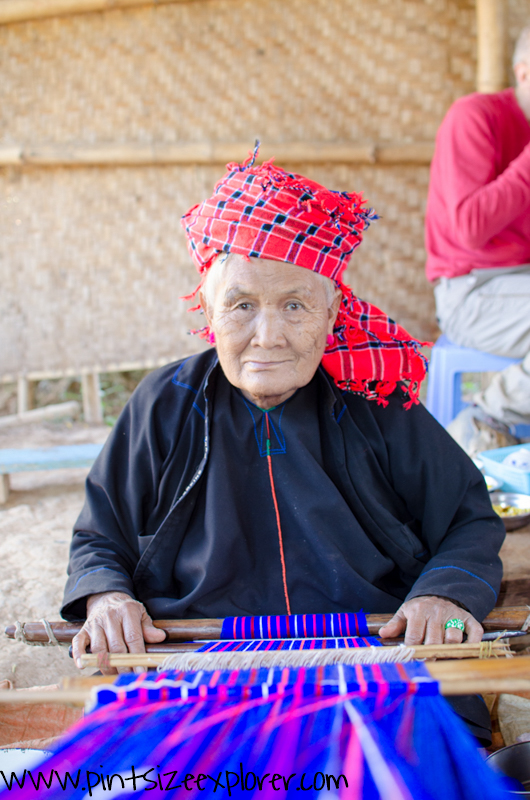 Later that day we stopped by a local house for lunch. We were asked to remove our shoes, just as you would in any other house, before we made our way into the spacious front room. A small table was set in the middle of the room for our lunch and we were introduced to the owners of the house – Nam’s mother and father! It appeared we had popped home – literally – for a spot of lunch that would be cooked by our guide’s mother. After lunch we spent a short time chatting to Nam’s family with Nam translating most of the conversation as unfortunately his family spoke little English. 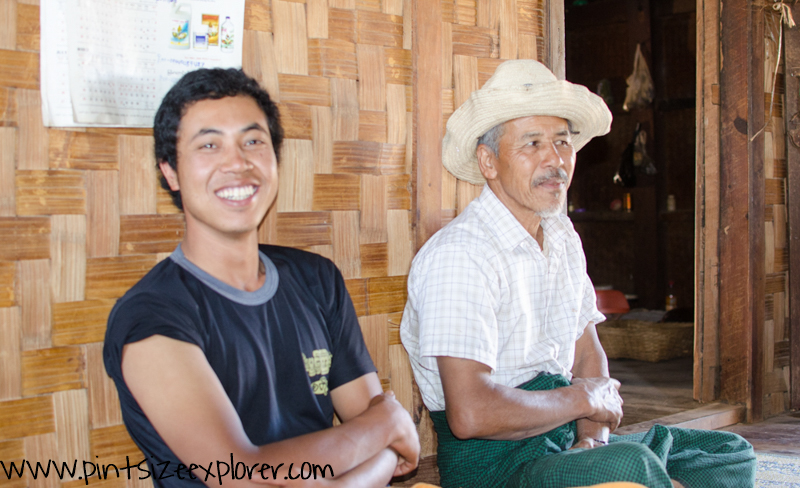 The forecast had predicted rain and within a matter of minutes of spotting a dark cloud overhead, the heavens opened up to the most almighty downpour. A few of the group were a short distance behind us, so as we approached a local village only half of us were able to sprint the short distance to seek shelter in a small café – along with about 40 others who appeared from the middle of nowhere!

Although we managed to miss the brunt of downpour, it did mean the rest of that afternoon’s trek was through mud and sodden fields, which did slow us down a little. I was gifted with a walking stick made of a broken branch to help me get over a particularly tricky section of the trek, but we all made it without any muddy slip ups. Nam even customised some homemade poncho’s for us in case it rained again. I have a feeling he might have done this before, as within no time at all, he whipped up some hilarious raincovers made from bin bags which had cut out sections for our arms and neck!

We Made It! Well Half Way..

We arrived around 4pm to a small village where we would spend the night in an authentic stilt house. The upstairs room was one large open space where a line of mattresses and blankets had been laid out for us. There was an enclosed bucket flush toilet at one side of the house and a small washing / shower area at the other side of the house. A small makeshift shop had been set up downstairs where we could purchase a well deserved cold beer and snack as we rested up before dinner. 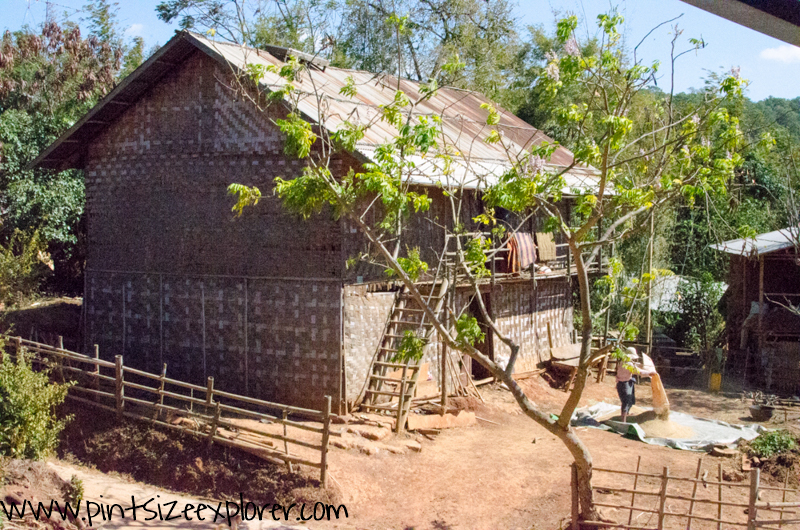 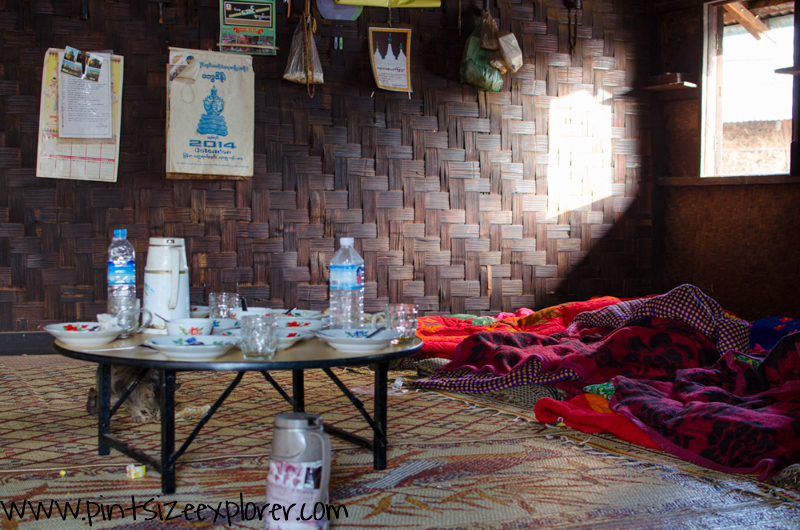 Dinner was cooked by a friendly man who lived a few doors down. We were presented with several plates of meats, noodles, veg, rice and soup to share between us, followed by some fresh fruit. It was safe to say that no-one went to bed hungry that night!

We were later invited over to the family home of our chef. I mean it was a little weird as no-one spoke English, everyone smoked cigars and we were pretty much sat in darkness, but after an awkward half hour or so we said our thank you’s and goodbye’s and headed back to our stilt house ready for a good nights sleep. 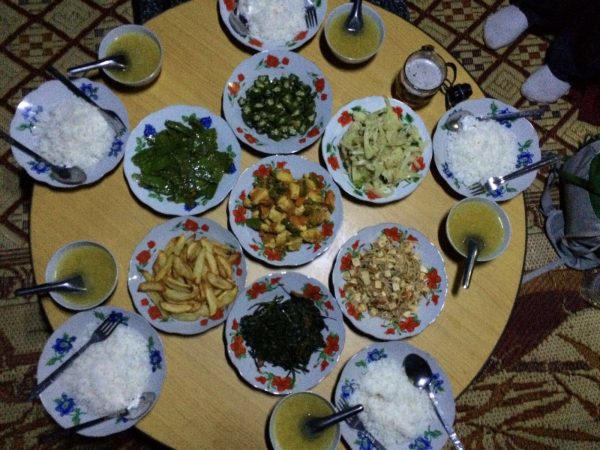 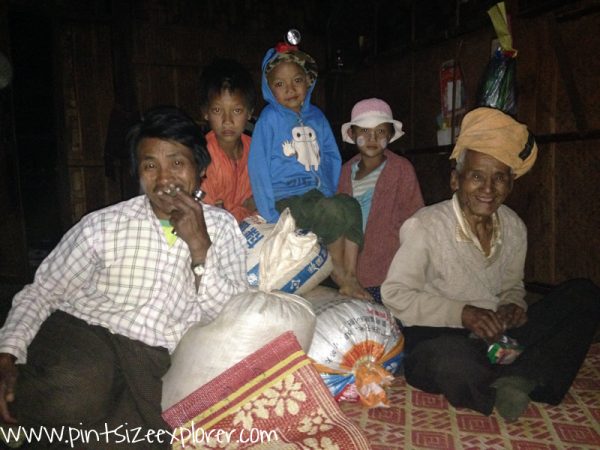 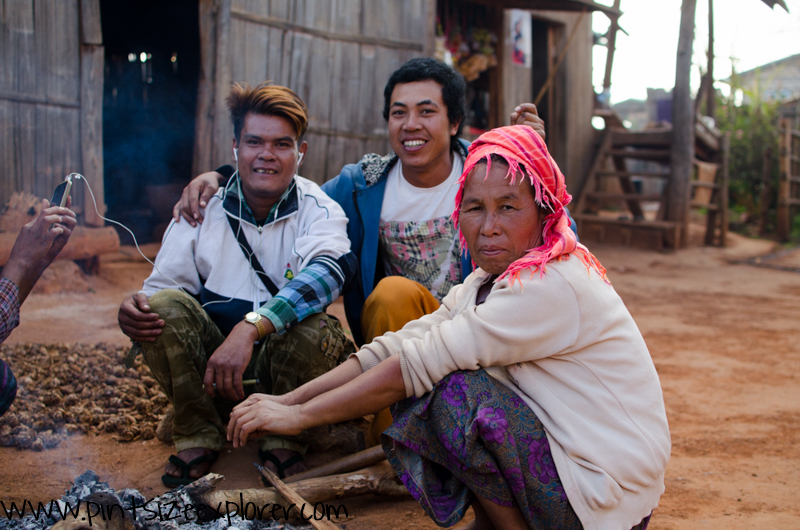 And We’re Off Again

After a surprisingly decent nights sleep we all woke early and were ready to head off by 8am. The second day of our trek was much shorter with around 4 hours of walking, so we arrived into a forested area just before noon for an early lunch. From here we would walk one final short distance to take a long boat out across Inle Lake where we would finish our trip in Nyaung Shwe. The boat journey took over an hour and was a good way to catch our first glimpse to all that Inle Lake had to offer. 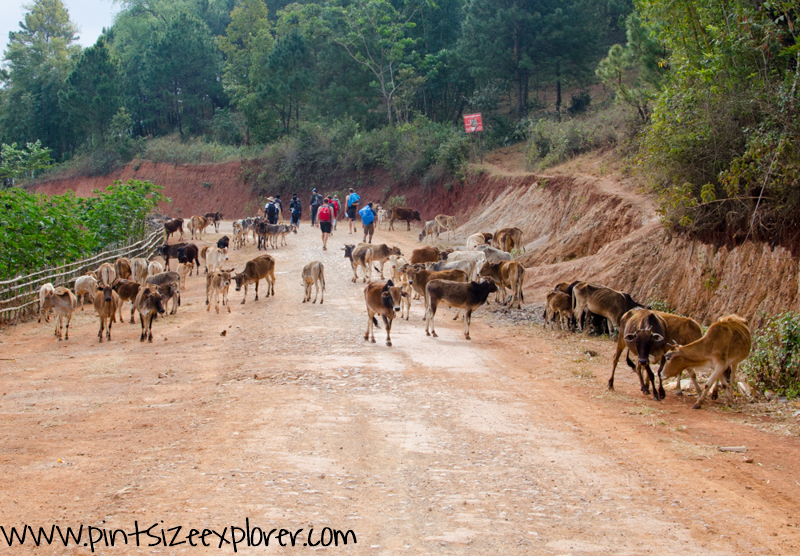 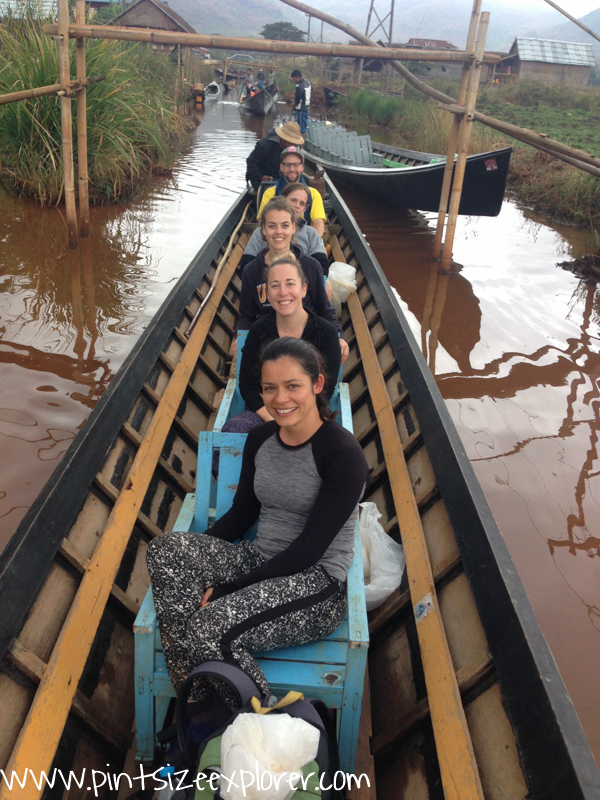 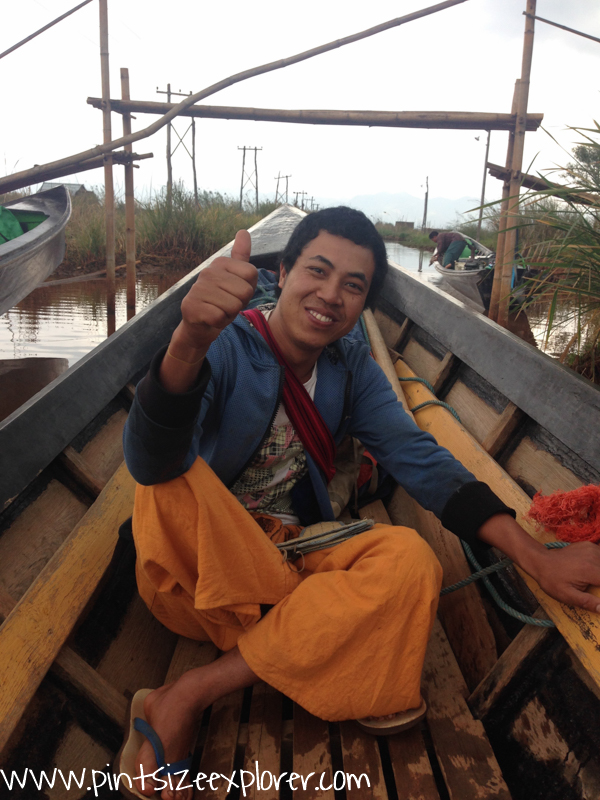 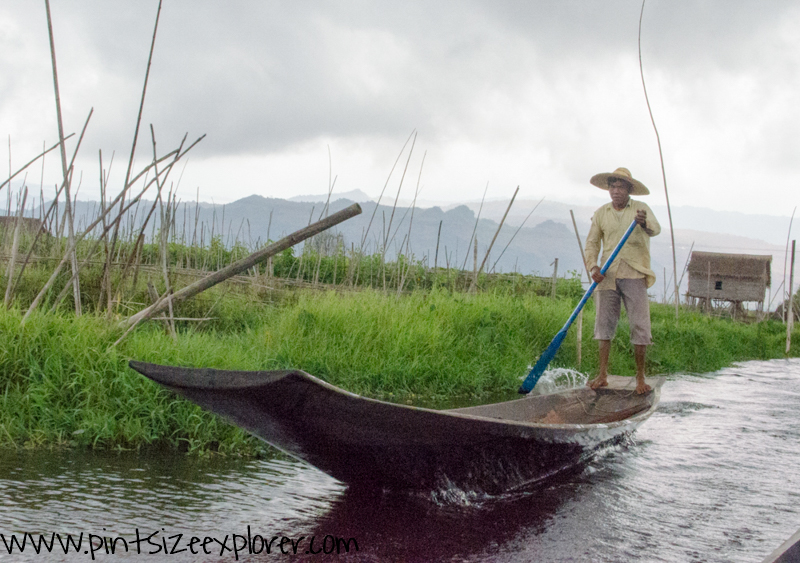