Our visit to Phu Quoc wasn’t quite as we planned as we were over shadowed by a thunderstorm that seemed to linger for a few days. We managed to avoid most of the storm with the exception of one day we hired a scooter to explore the island. Typical!! It seemed the further north we travelled, the darker the clouds became and the heavier the scattered drizzle fell.

Before we knew it, we were driving through a full on tropical downpour, raindrops flying at us like pellets whilst we wore nothing more than a bikini and sundress (me!) and shorts & a t-shirt (Adam!). It was shortly after we passed the turnoff to the Vinpearl Safari that the thunderstorm began (about 4 minutes later to be exact) so we decided to detour to visit some fuzzy animals as our plans for a beach day was clearly not going to happen. 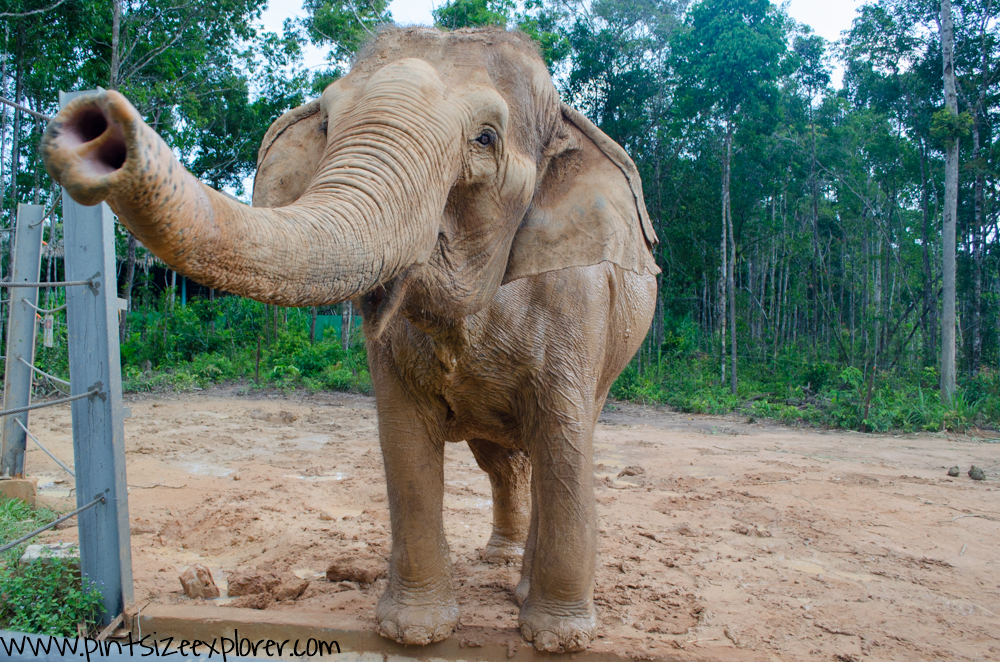 As much as I absolutely LOVE animals, I’ve always had mixed feelings about zoo’s. I have visited a fair few and they can be pretty depressing when enclosures are small, cramped, and the animals are clearly distressed. On the flip side, they can be a wonderful experience allowing you to get up close and interact with the animals, as well as learning and supporting various conservation projects by donating and adopting.

If you love animals as much as I do, then you might like to read more about my visit to The Jaguar Rescue Centre in Costa Rica, where I adopted the beautiful Sandra the Sloth. Click here for more info!

I always prefer a safari experience to a zoo, where animals are free to roam within their natural environment (or as close to natural as their replicated surroundings have been created!). So, with not much else to do on a remote island in the torrential downpour, we thought we’d pay a visit to the Vinpearl Safari.

Tip: if you ever happen to have a spare afternoon in Rotterdam, then pencil in a visit to the Safaripark Beekse Bergen. This was a brilliant example of how safari’s can work! 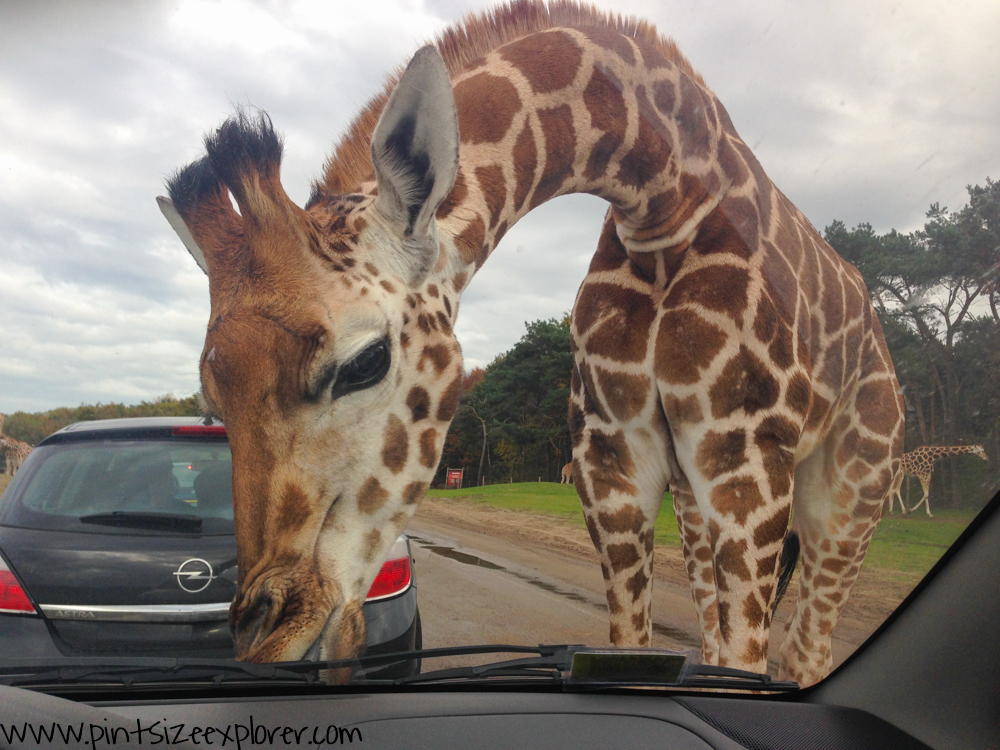 The Vingroup, who originated as a leading real estate brand, first opened their Vinpearl Land empire in Nha Trang which includes a waterpark, an amusement park, as well as an aquarium which is reached via a 3km cable cart. These hugely successful developers now also have a healthy stake in Phu Quoc, opening a second Vinpearl Land in 2012 which includes a luxury resort, water park, 5D theatre, dolphin lagoon, underwater world – as well as opening Vinpear Safari. I find it strange that all this exists on a remote island to the south of Vietnam, but this is a prime example of how tourism and infrastructure can drastically change a once beautiful sleepy island into a modern age holiday destination.

Turning off the main road, we rode into the national park for about 2 km to the entrance of the Vinpearl Safari. We didn’t pass a single other person other than two bored looking security men who waved us on. We initially put this down to us being the only crazies to drive out in the middle of a storm to an open-air safari-zoo, but even when the rain cleared up there couldn’t have been more than 15 other people there.

As we pulled up to the empty car park containing literally two other mopeds and a car, two security men rushed over to us armed with oversized umbrellas to escort us to the entrance. Staff were very attentive, however we were 100% soaked through so despite their best efforts the brolly’s weren’t much help.

There were several souvenir shops leading up to the main entrance and ticket office, aptly named after many of the animals. Despite the hefty ticket price (600,000 dong / £20), we had no issues purchasing tickets from the English speaking sales assistant. We were given a site map, explained what time the live animal shows started, advised what time the safari shuttles operated and sent on our way armed with a Vinpearl giant umbrella as it was still lightly raining. 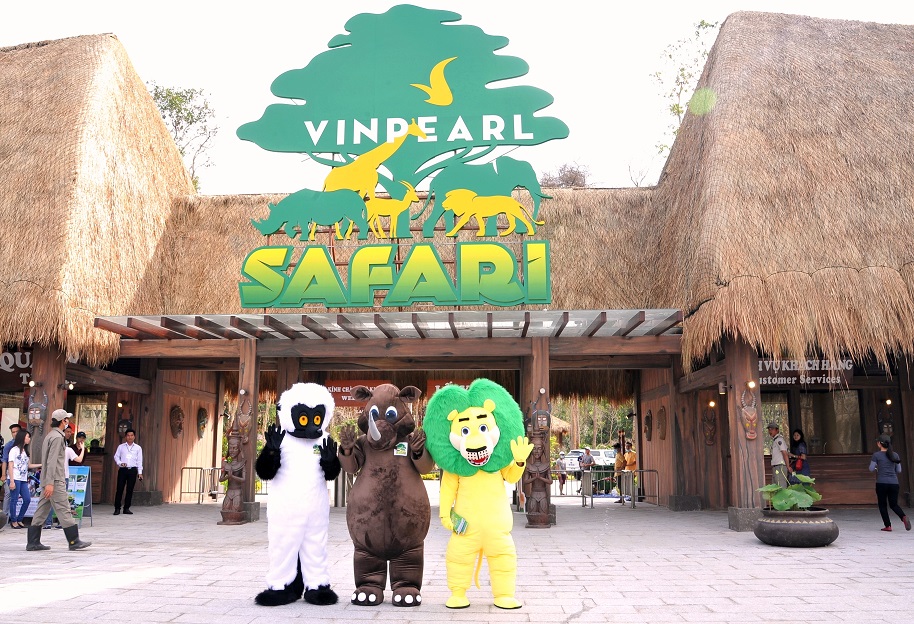 The park is pretty huge. So huge that we were there for just over four hours. The site was split into three main areas with your regular zoo style animal enclosures alongside the Primate World area at the front of the park, and the open drive through safari at the rear. There was a live animal demonstration area – we missed the morning show but the afternoon show included Parrots, Eagles, Snakes and Monkeys.

For an additional fee, VIP tickets could be purchased which included the use of an electric cart and a guide to escort you around the park. There were further electric carts available for all guests, but they charged around 20,000 dong to be shuttled one way from one side of the park to the other. Considering the price of the entry fee this should have been included. 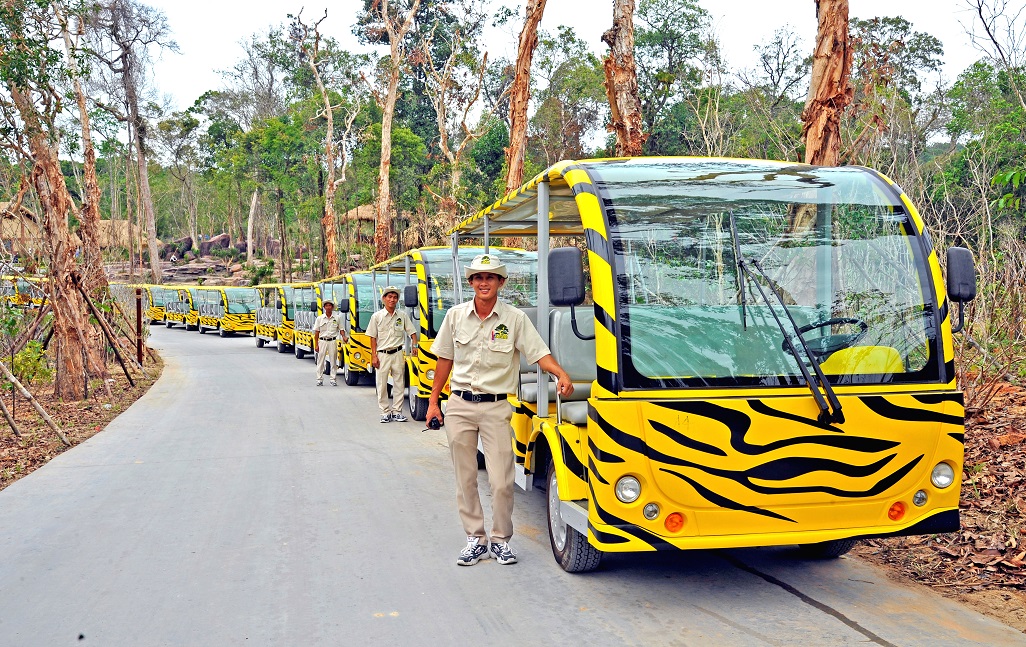 After passing the flamingo lake, we started our visit over in the kiddie zone, an enclosure where small goats roamed free around a herd of lazy llamas. The animal keeper handed us a bunch of leaves to feed the goats and before I knew it we had goats jumping up at us to graze on the leaves. This was pretty fun as the harmless little guys nibbled on the leaves and didn’t stop until all the food was eaten. 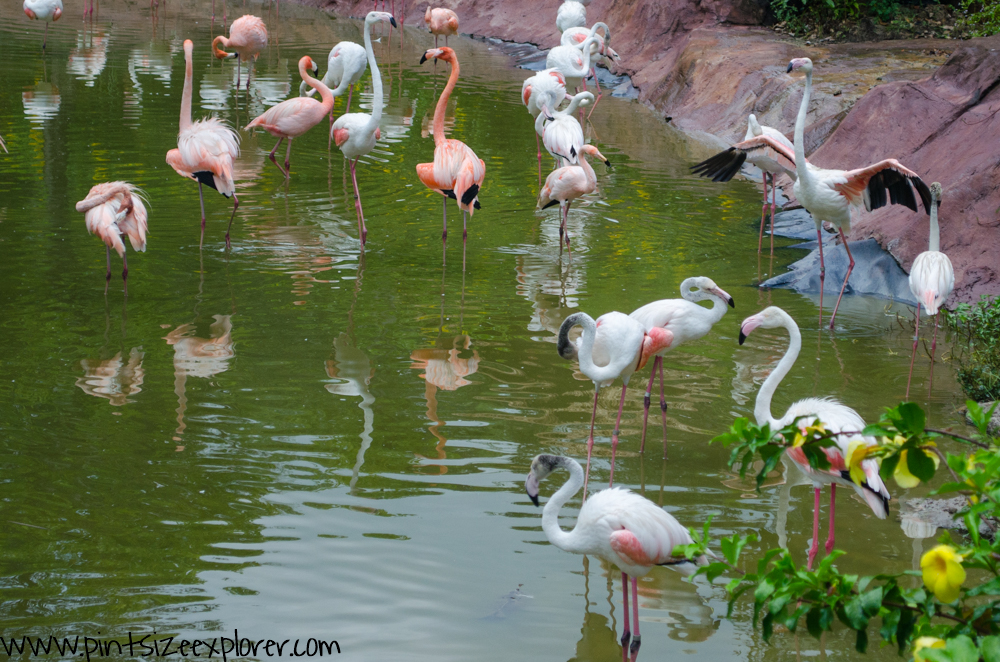 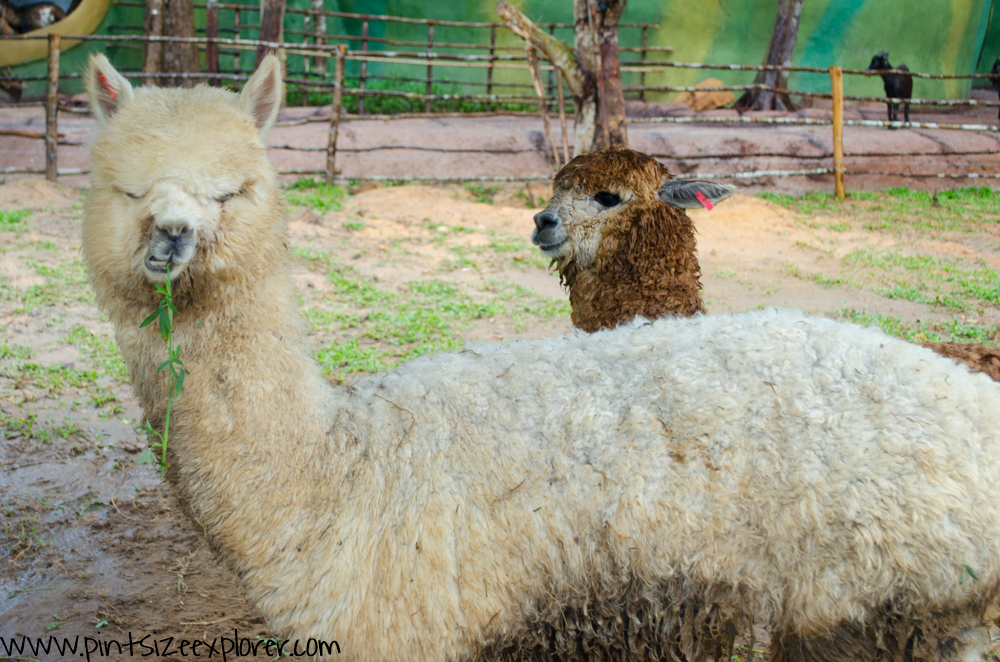 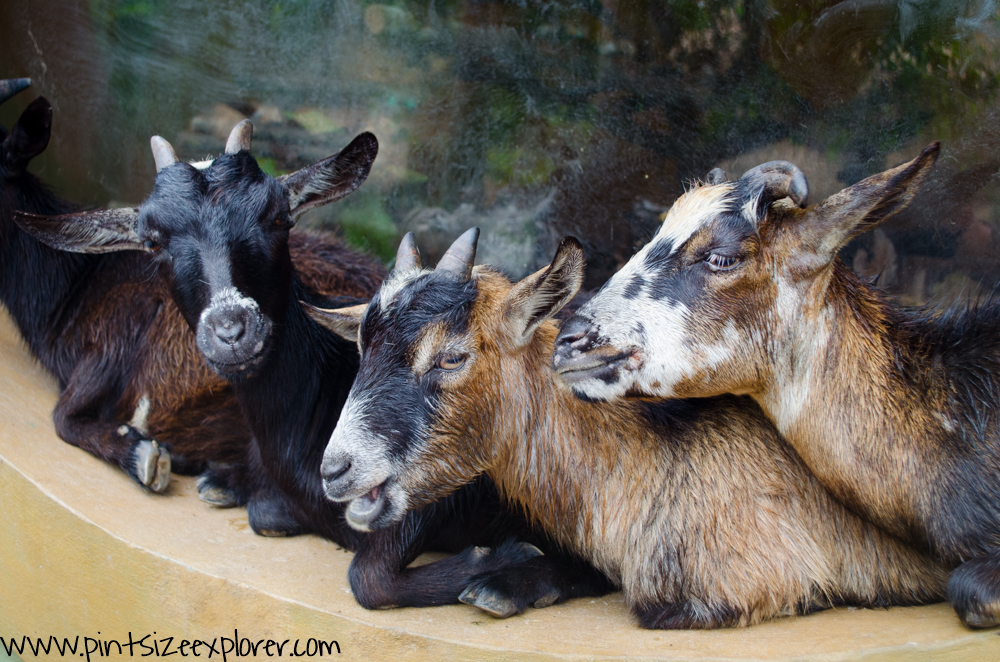 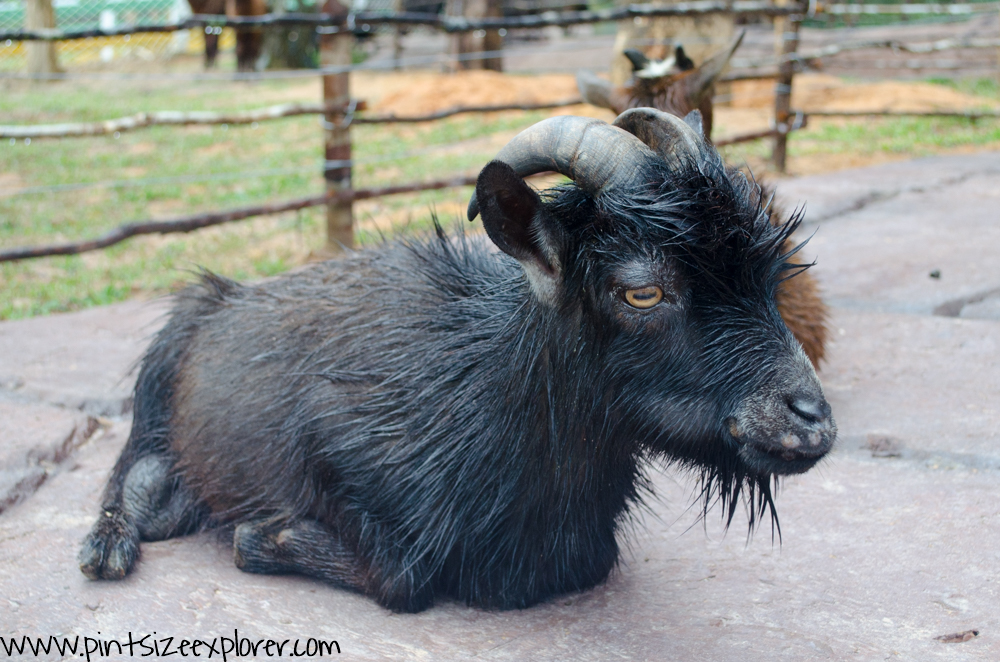 On the other side of the enclosure were a few dubious glass pens, one with some meerkats in it, and one with a white fluffy animal which we believed to be a tiger cub. This wasn’t something I was impressed by at all. The single pen had literally nothing in it but one blanket and one half chewed shoe, and the cub lay facing the door with his back to the viewing window. As we didn’t want to disturb him we couldn’t get a proper look to see what he was (or get a photo to show his enclosure), so we could only assume he was a big cat as per the sign nearby that pen. 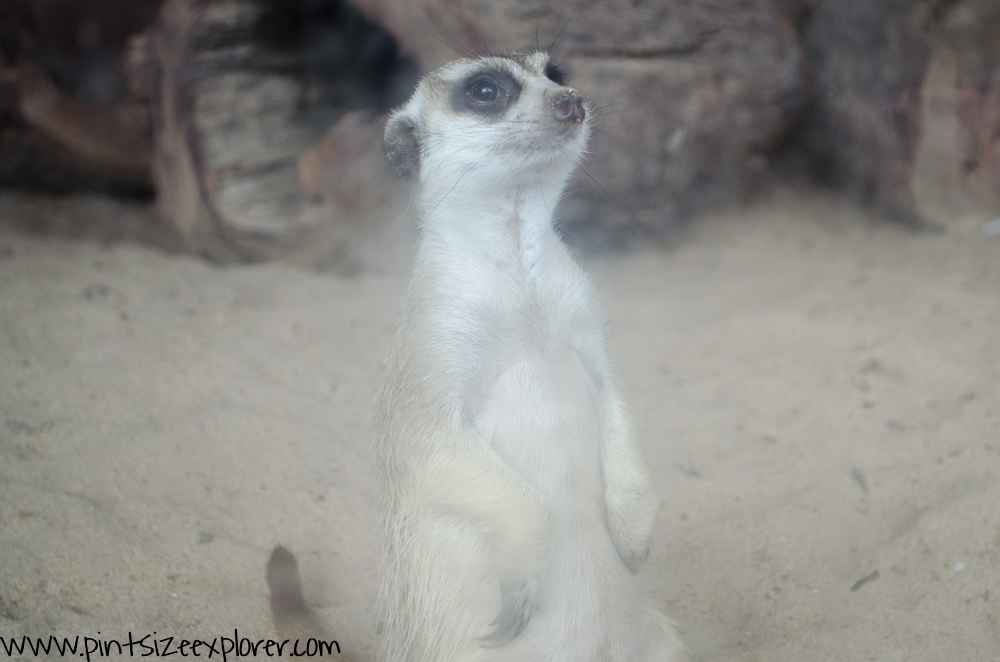 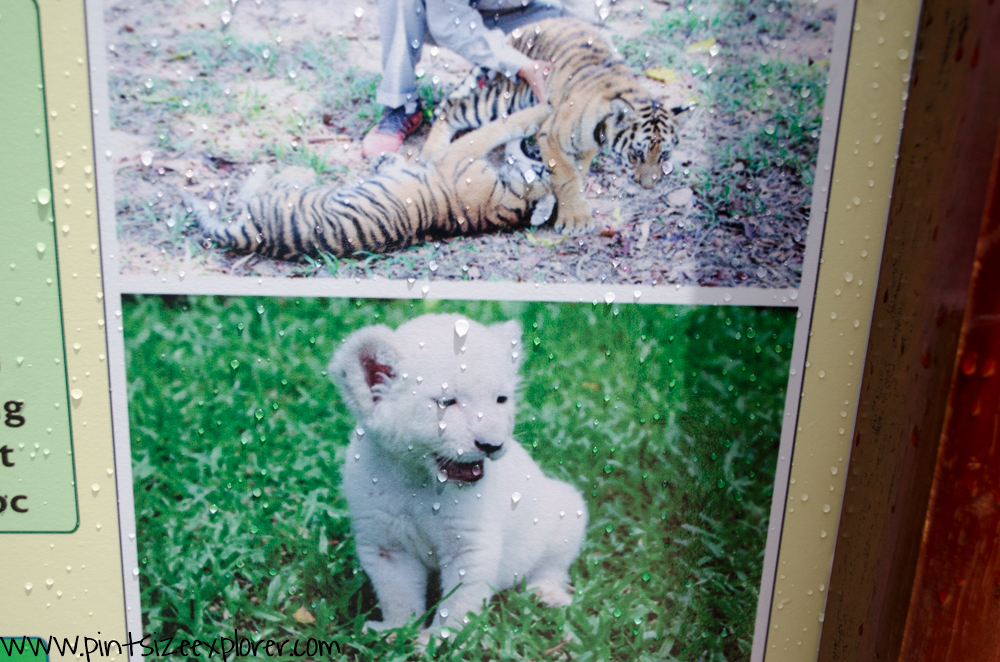 Moving further into the zoo we passed the lion enclosure before heading into the Primate World where we saw many different monkeys, as well as lemurs. There were even a few naughty monkeys roaming free which was fun to see. In the main zoo area there were many more animals including deer, crocodiles, camels, tigers, buffalos, elephants, giraffes and so on. Swan Lake was a lake full of swans (obviously), and here was also a gated bird enclosure that you could walk through. 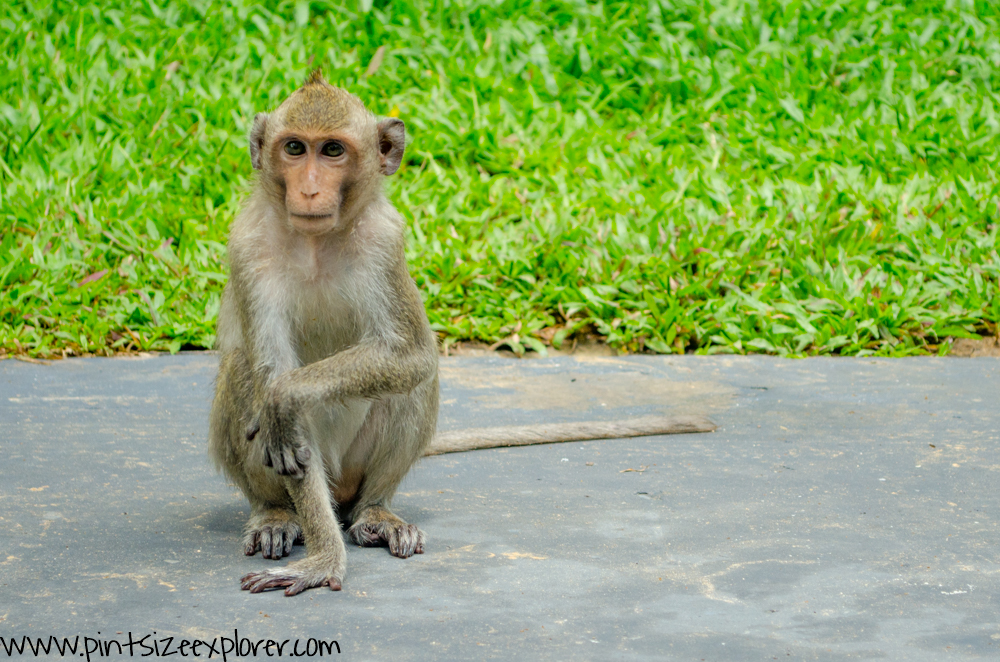 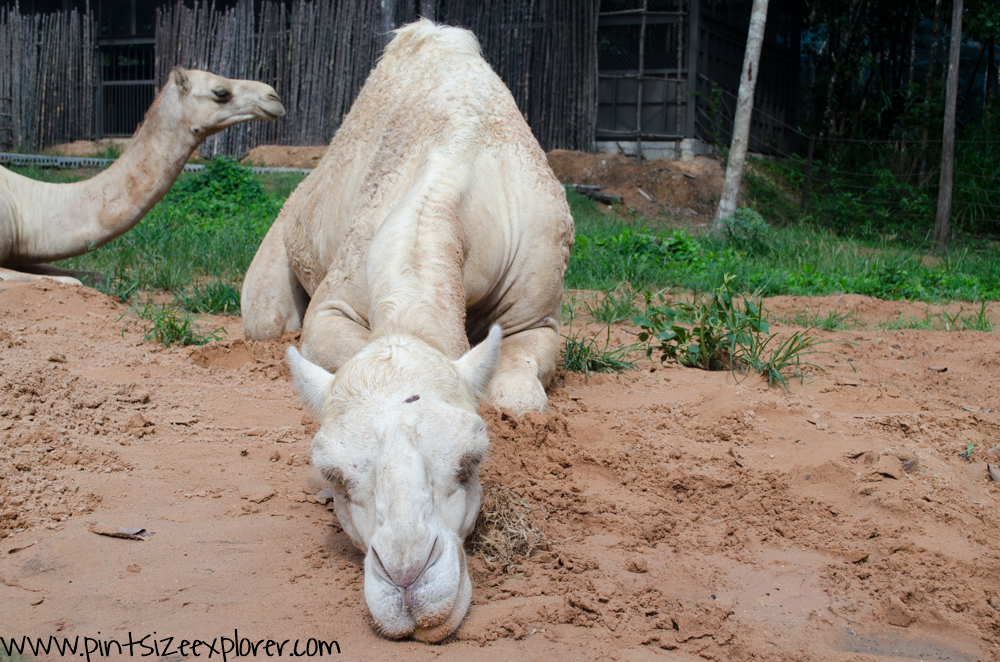 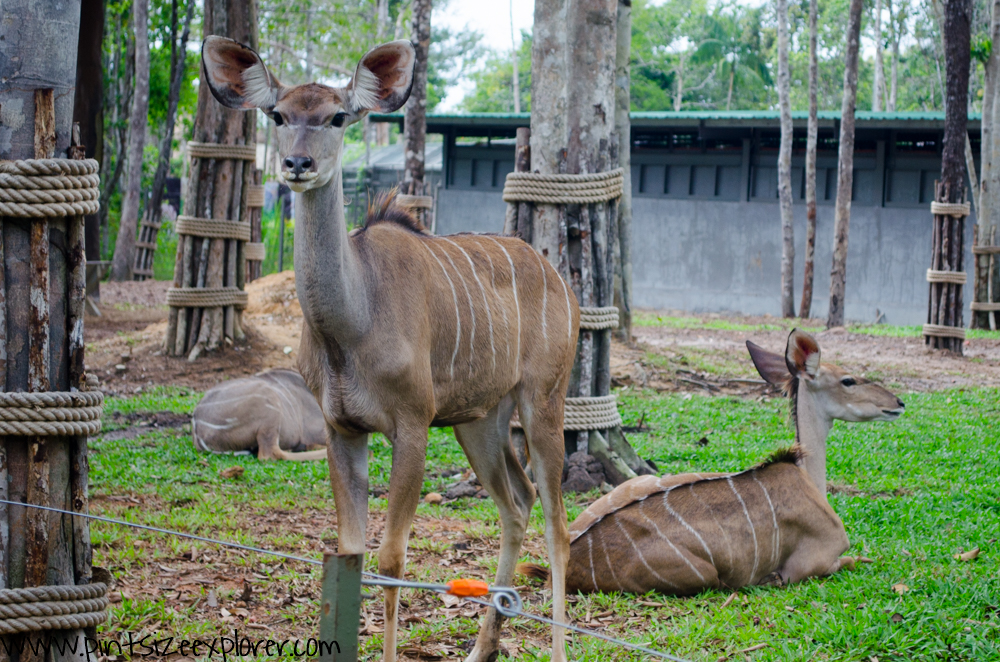 We excitedly headed over to see the elephants but we’re saddened to see one lone elephant moping around at the rear of his enclosure, and four others together in a much smaller area by their keepers. I could only assume these elephants were huddled together in this particular area as this is where they were fed by the keepers. For 30,000 dong / £1, visitors were able to feed the elephants – which is exactly what we did! Our 30,000 dong bought us five chunky bamboo sticks which we handed out to the elephants.

This was so much fun watching them wave their trunks around as we fed and stroked them. They were all well behaved with the exception of one particularly hungry (or greedy!) Nellie who stomped over to me and slapped my arm with his trunk for more food. He thought he’d be clever and throw a load of mud at us too. 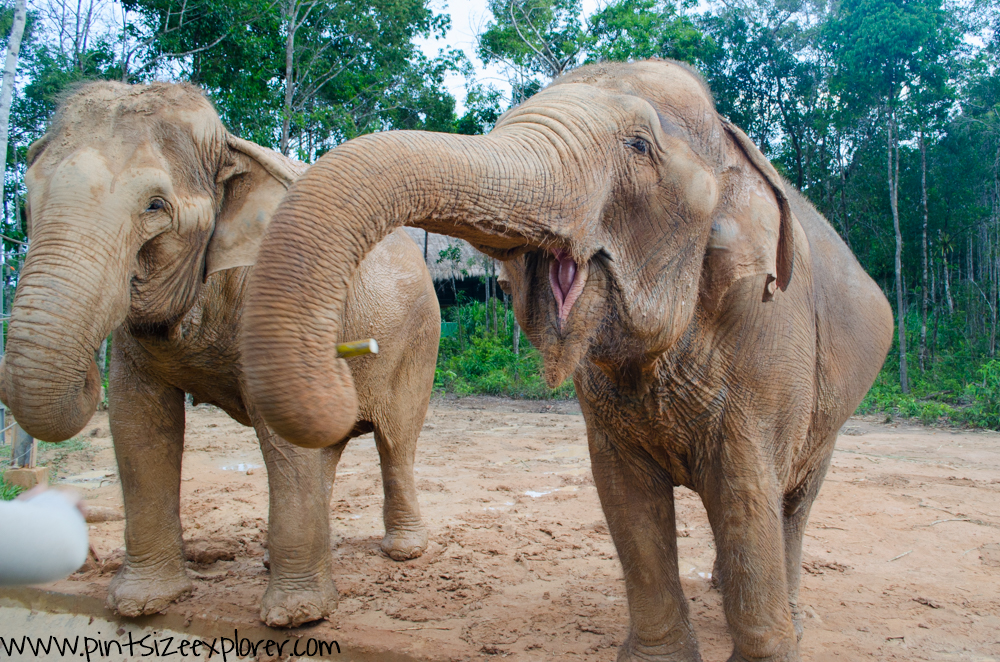 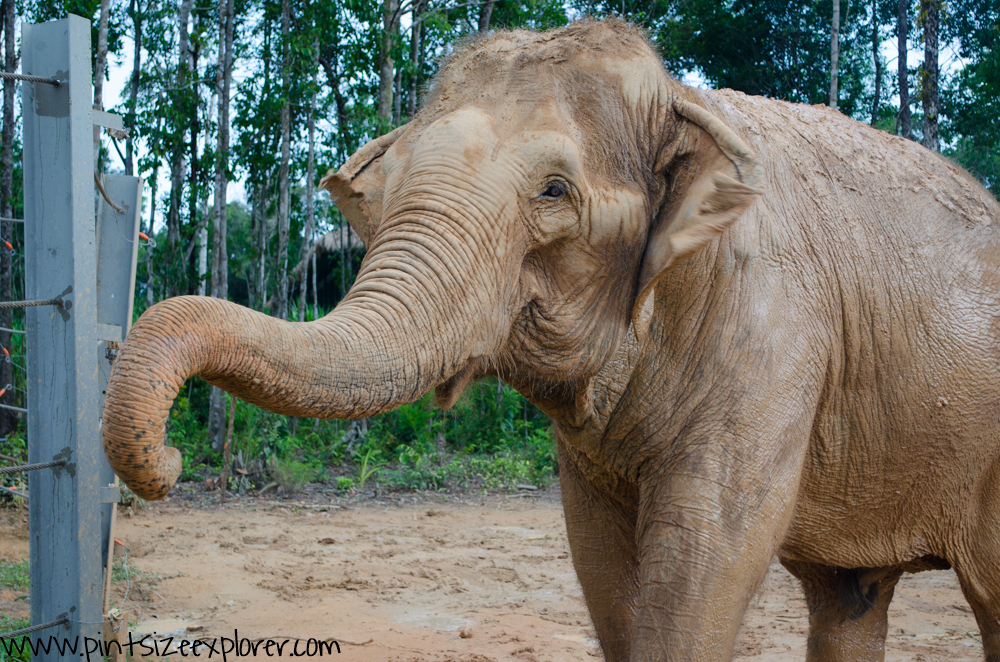 We were also able to feed the giraffes for the same cost of 30,000 dong, which bought us a small packet of carrots and banana’s. We did this over in The Giraffe café where we had lunch looking out to the giraffes in the safari. This was without a doubt the best part of our visit! The keeper called over one of the giraffes who delicately trundled over to us in the feeding platform.

This gentle giant carefully bent down to us and wrapped his humongous tongue around each piece of fruit or veg we gave him. As there was no-one else around, the lovely keeper gave us an extra bag of food to feed the giraffe with, and also took my camera to take some photos of both Adam and I with the wonderful mammal. The keeper spent some time entertaining and feeding the giraffe so we could stroke his muzzle and capture some great photos whilst so close to him. Literally the best day of my year!! 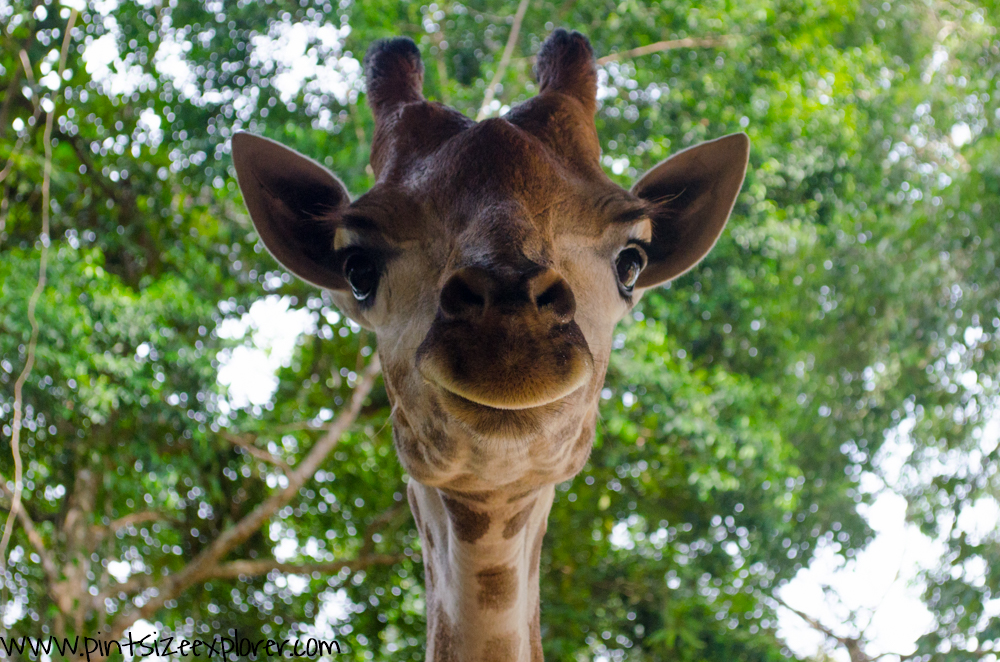 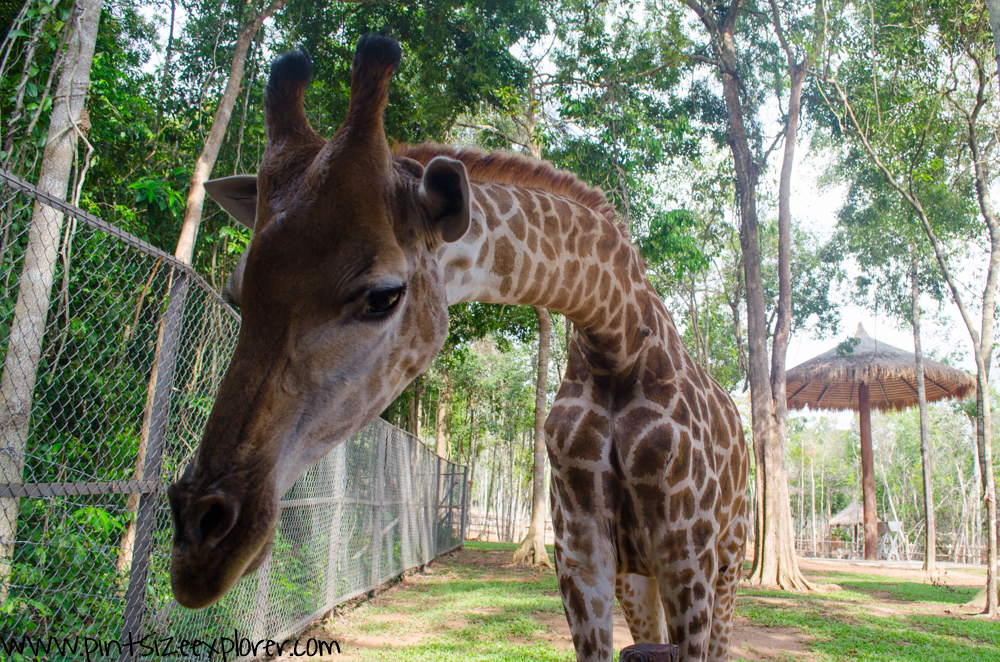 Located at the rear of the park was the safari. Small buses departed every 15 minutes and took 30 minutes to drive through the secured safari area. This was far better than we expected, but no doubt because we were the only ones on our bus! A designated guide joined our bus to reel off a number of facts about the animals as we approached them. Whilst the information wasn’t that informative, it was a nice touch to have that in place for visitors (guides were also bilingual so on busier days would have spoken in English, Vietnamese and Chinese). We saw a good amount of large animals roaming around – lions, tigers, zebra, deer, buffalo, rhino, and so on. 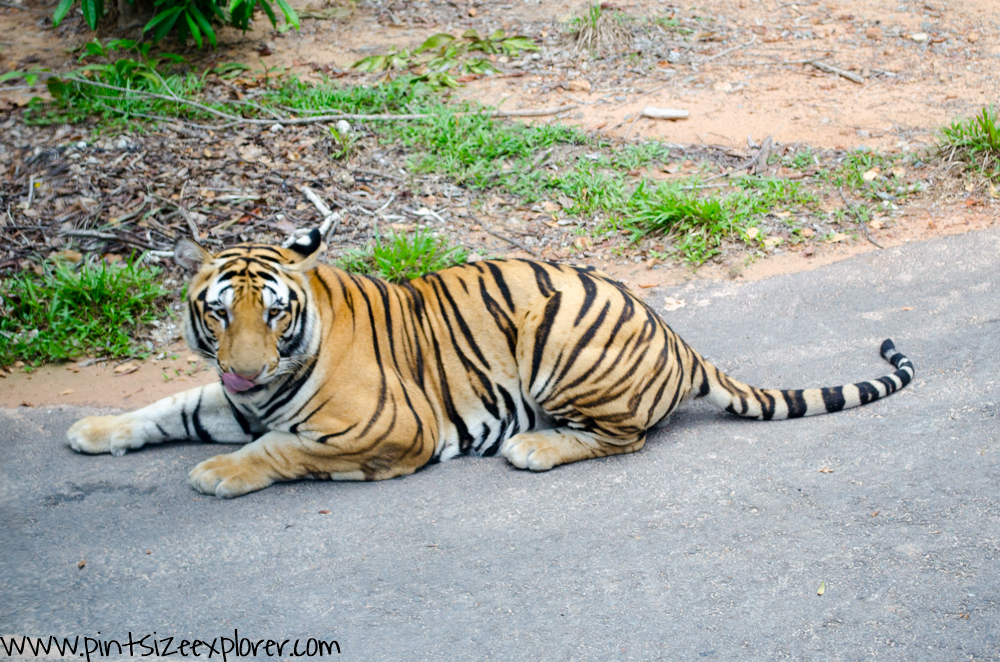 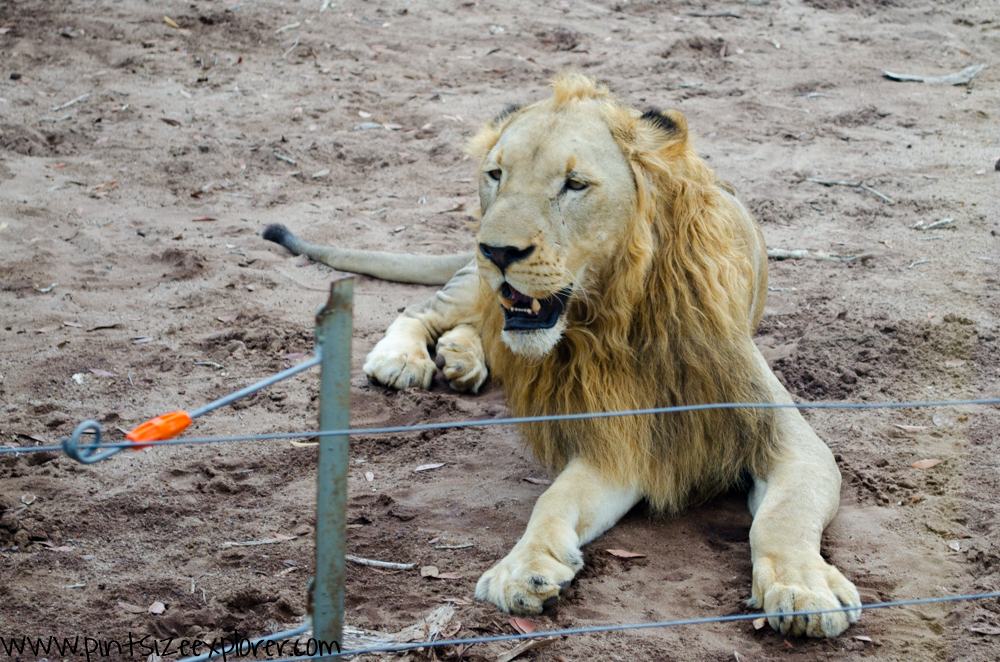 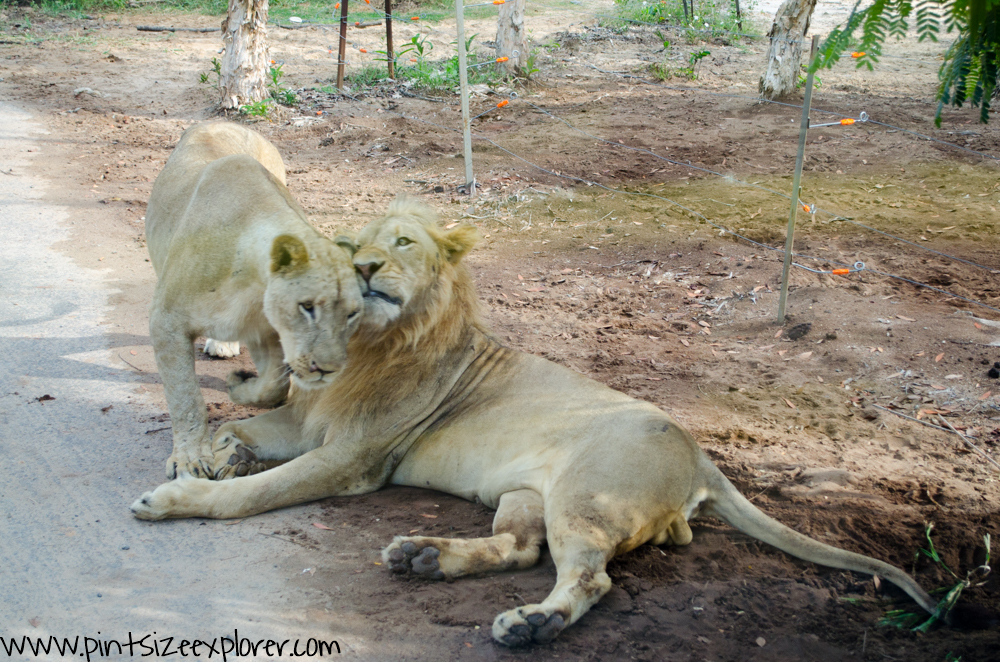 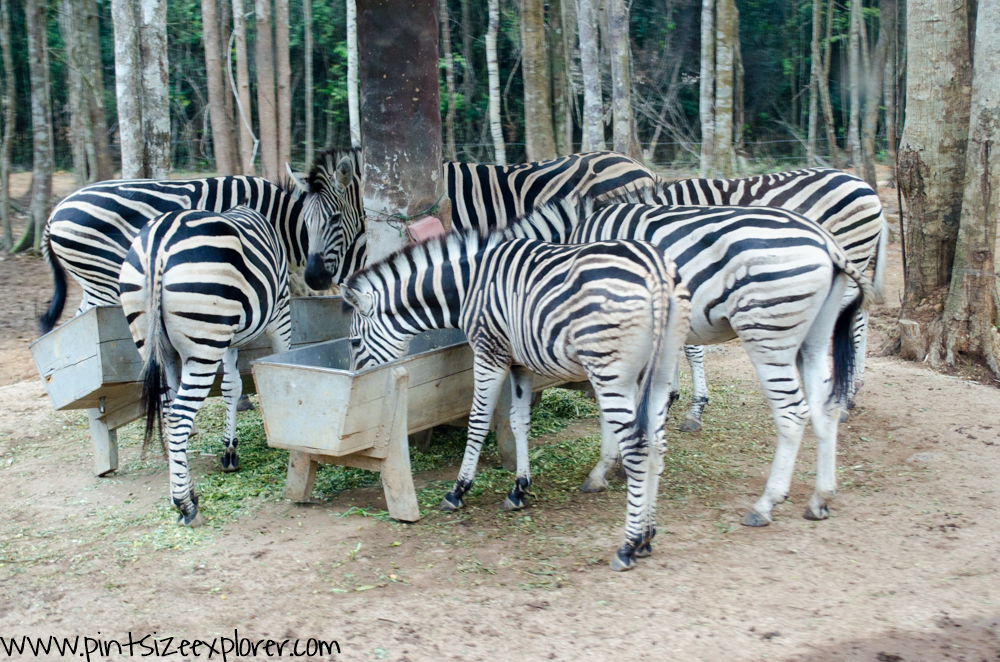 The actual zoo space itself was lovely and spacious, surrounded by the natural environment of the National Park, however I couldn’t help but feel with a plot of land that big it seemed bizarre that the actual enclosures themselves weren’t bigger than they were. Everything was otherwise great there – clean, tidy, insanely spotless toilets (cleanest we used in Vietnam!). Overall I’d say the Vinpearl Safari is worth a visit and I’m glad we went. If you are a family with kids it’s worth noting for an extra 250,000 dong, you can get a combo-ticket that allows you entry to Vinpearl Land as well as Vinpearl Safari.