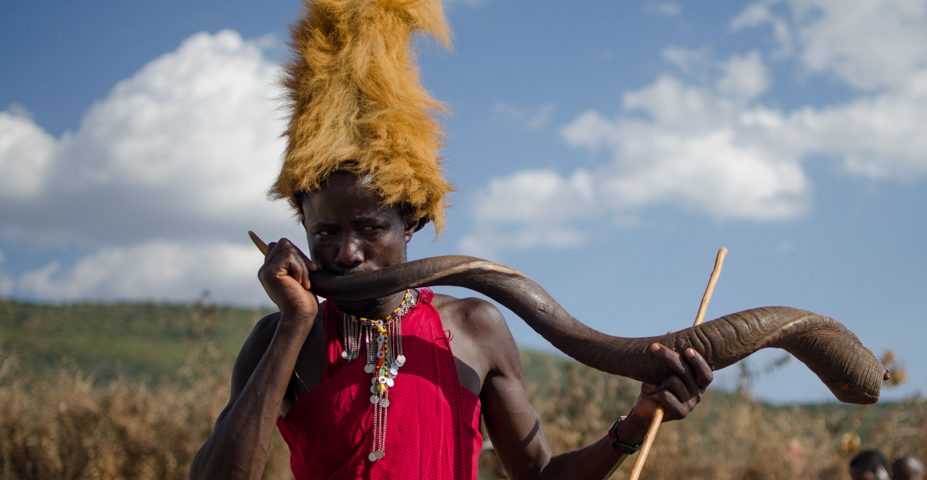 You won’t find much on the open road that leads up to the entrance to the infamous Masai Mara National Park. In fact you can barely even call it a road. We drove for two hours jiggling around in our robust 4×4 land cruiser, as our guide carefully navigated the dusty roads covered in potholes and debris. 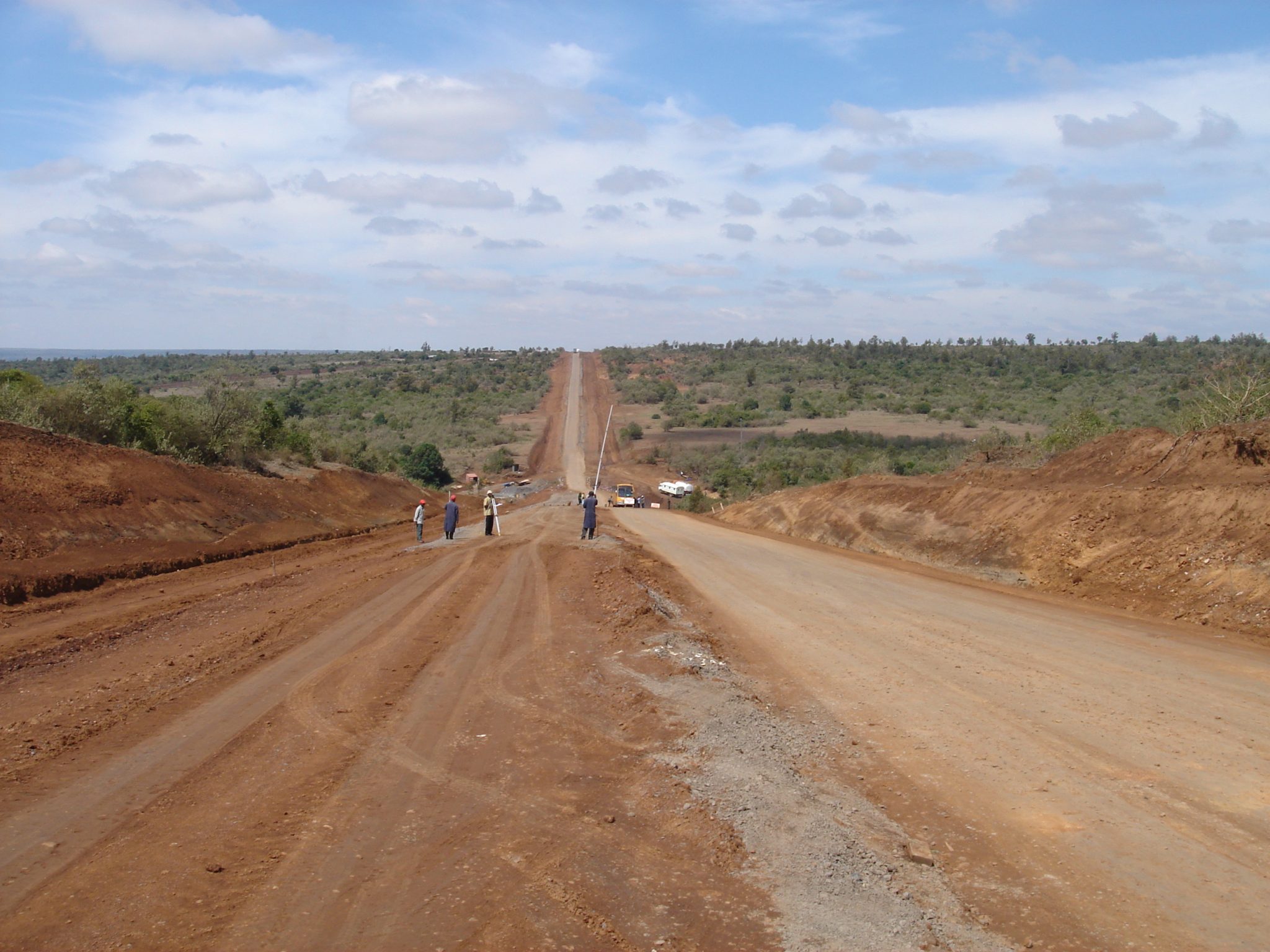 Many travellers will find themselves stopping by a traditional Masai village during their visit. We had read a fair bit about these villages and were slightly apprehensive, but went along on the recommendation of our guide. Having the opportunity to engage with locals, learn about a their history and experience their way of life is so valuable. If you are going to travel somewhere completely different to your usual lifestyle then I think it’s imperative for you to appreciate how others live and how much their lives differ from yours. Little did we realise just how much of a tourist trap our visit would be. 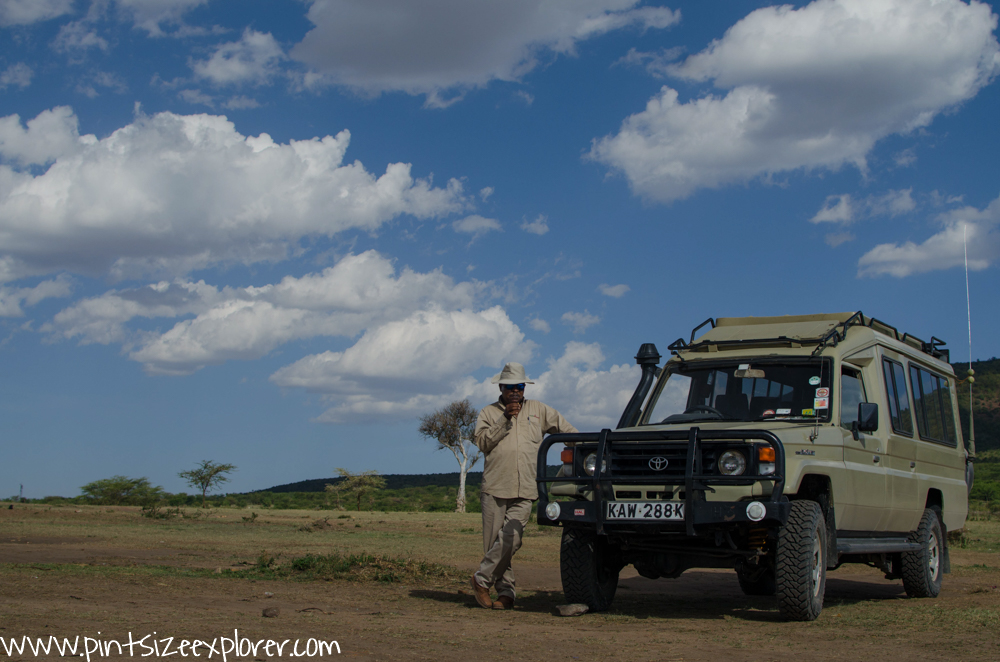 We pulled up outside the village and our guide went to speak with a few of the leaders of the village. We were asked to pay 8,000 KES – that’s just under USD $80 for our group, so USD $20 per person – but stupidly as we had been flitting between four currencies over the past week none of us realised at the time just how much this was costing us. Once we handed over our mega bucks our tour began. 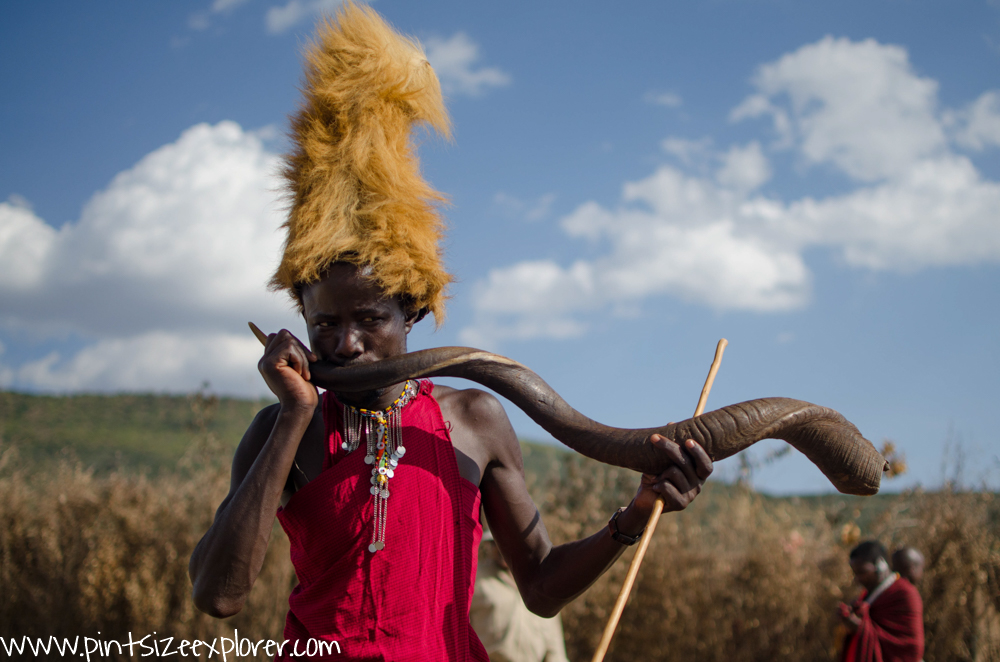 As we stood outside the entrance to the village, all the males of the tribe wandered out with two of them coming over to introduce themselves, one of which was the son of the village chief. He spoke really good English and told us briefly about the importance of visitors to their village and how our money will help them. He told us a little more about their tribe, how long they had been there, and how many people lived in their village. He explained he would take us through to their village on a tour that would last around an hour. We were encouraged to take as many photos as we liked, and to ask as many questions as possible, but first a welcome dance would be performed for us. 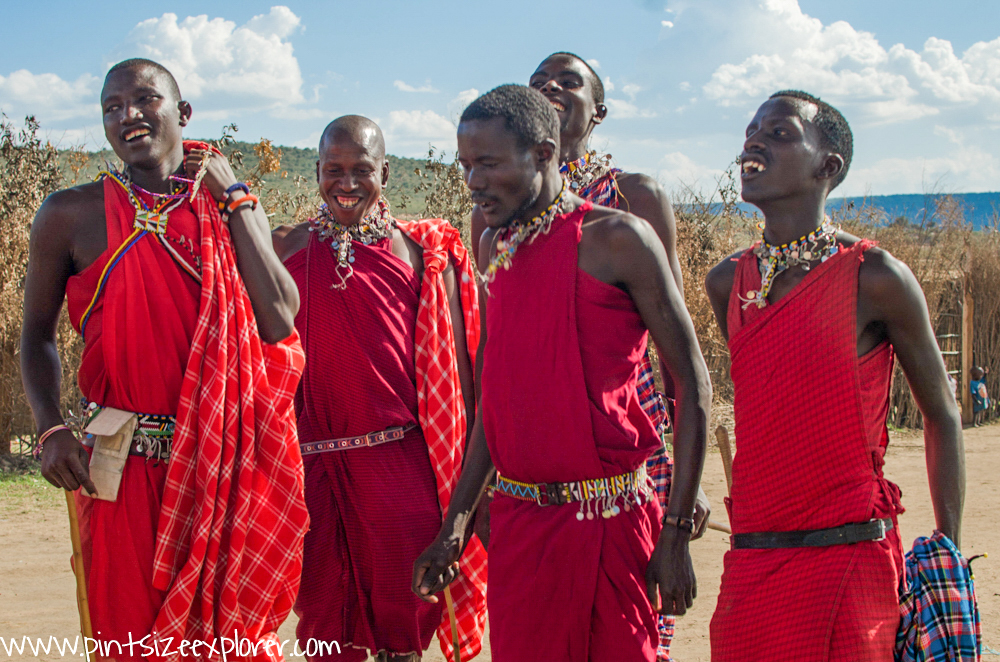 The long established welcome dance was performed solely by the males of the tribe. This included lots of singing, chanting, dancing and jumping. Some of the guys were able to jump really high, which we later understood to be a sign of importance (like a status thing!). We were a group of two guys and two girls. One Masai guy took off his scarf and wrapped it around Adam’s shoulders, before taking both Adam and Alex by the hand and encouraging them to join the welcome dance. (Slightly awkward on the boys behalf, but made for some funny photos!). 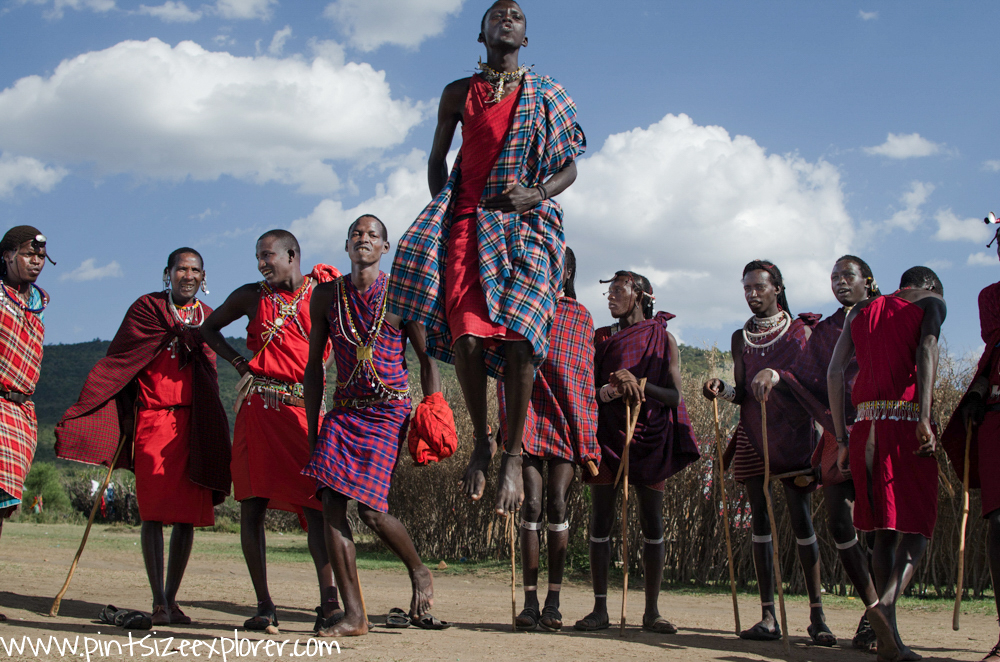 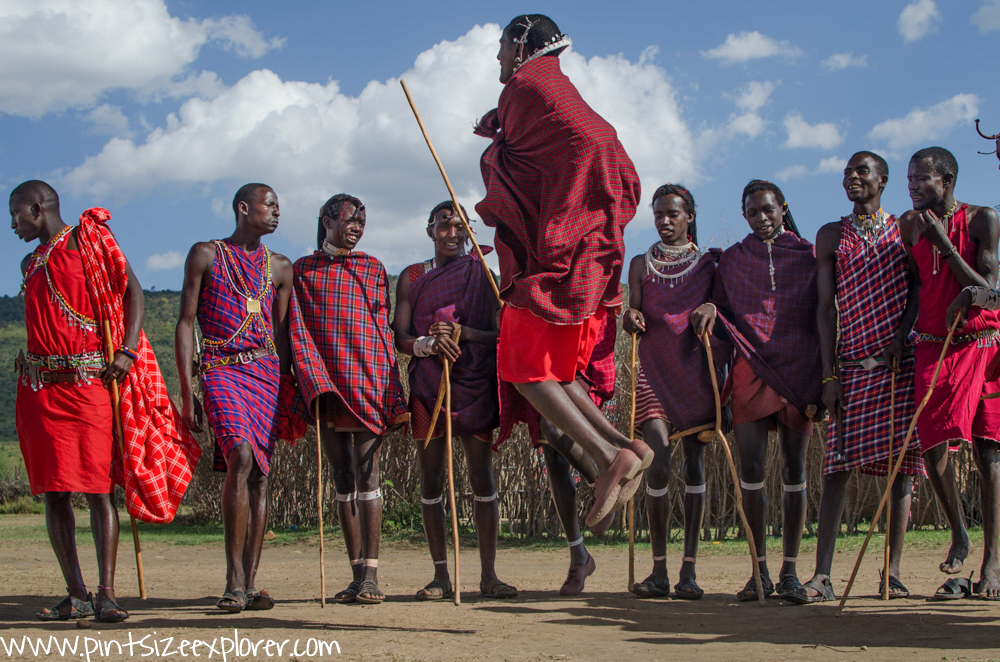 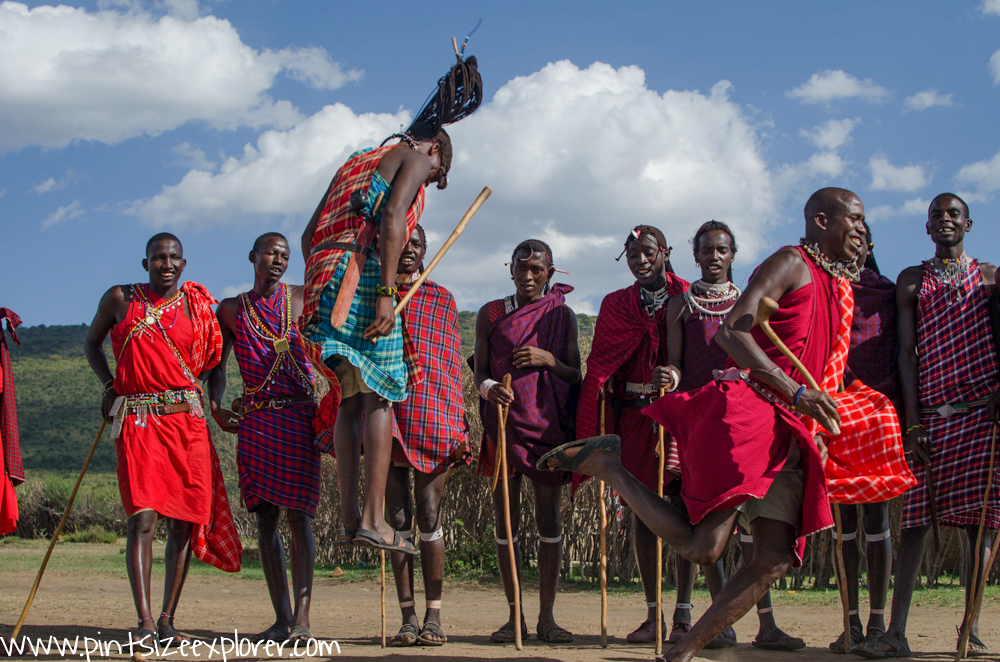 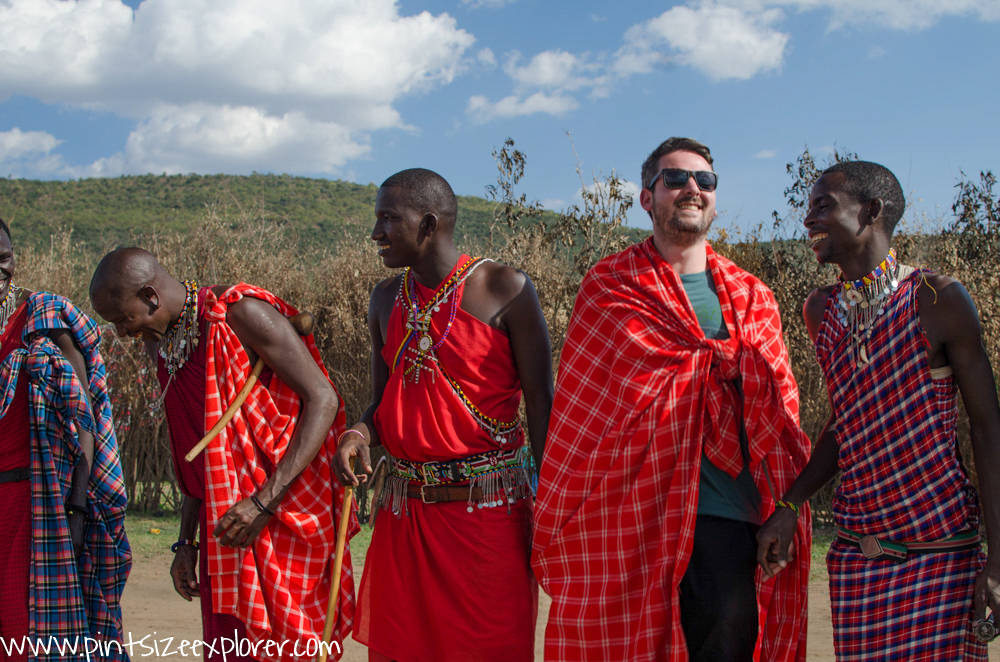 Once the welcome dance was over the chief’s son who would lead our tour, took us into the their village. Before taking us into the camp he talked more about their village where five families of 160 people lived. As we entered the camp, women of all ages along with some small children, stood together in a line to sing another welcome song for us. This time it was only the females who performed, and you guessed it, Gemma and I were taken by the hand and encouraged to join in too. 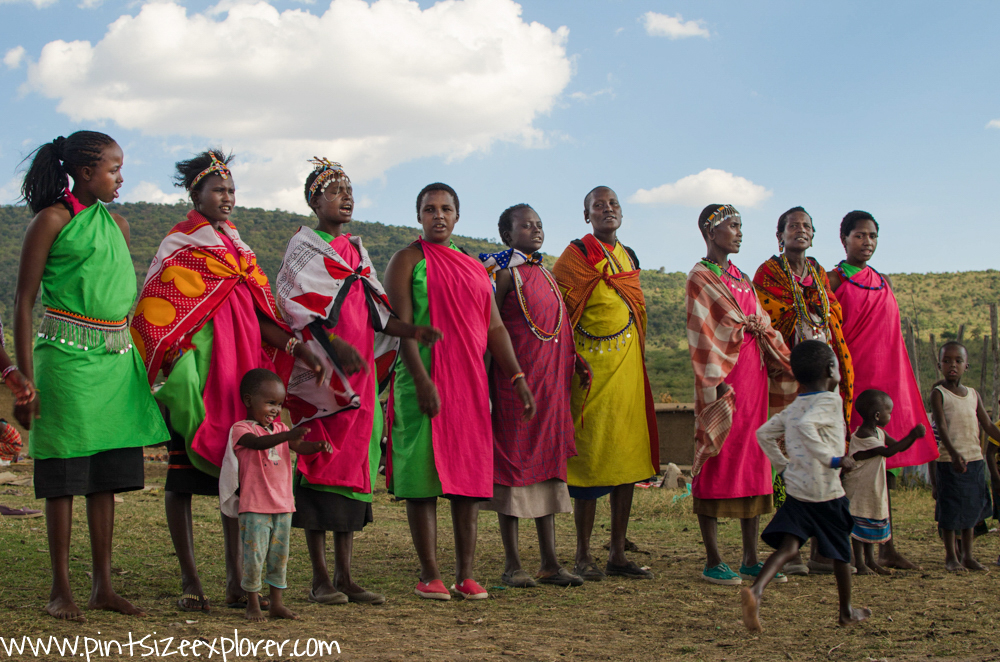 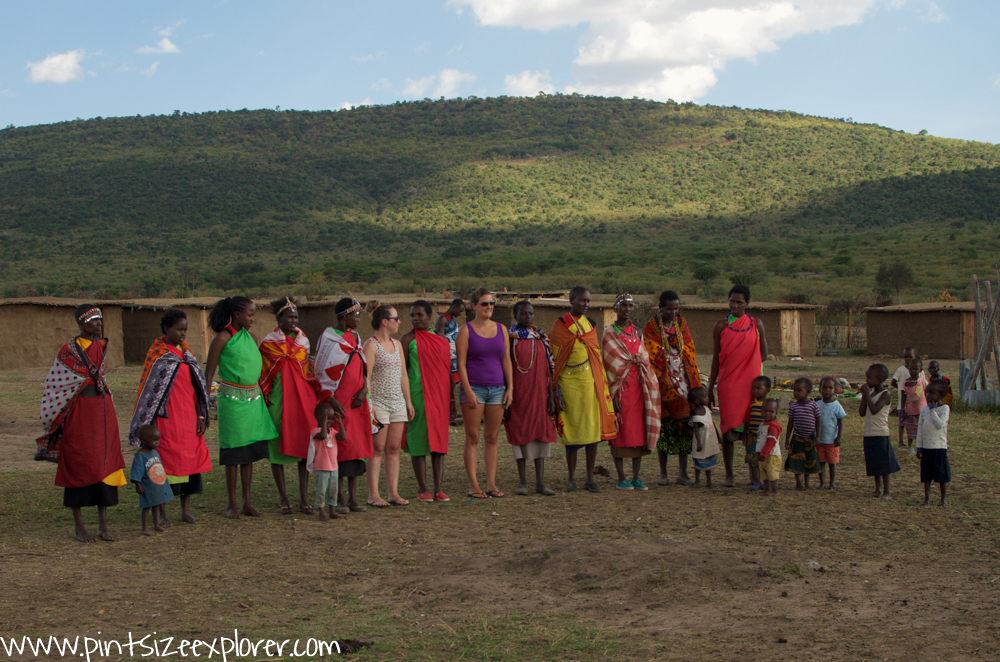 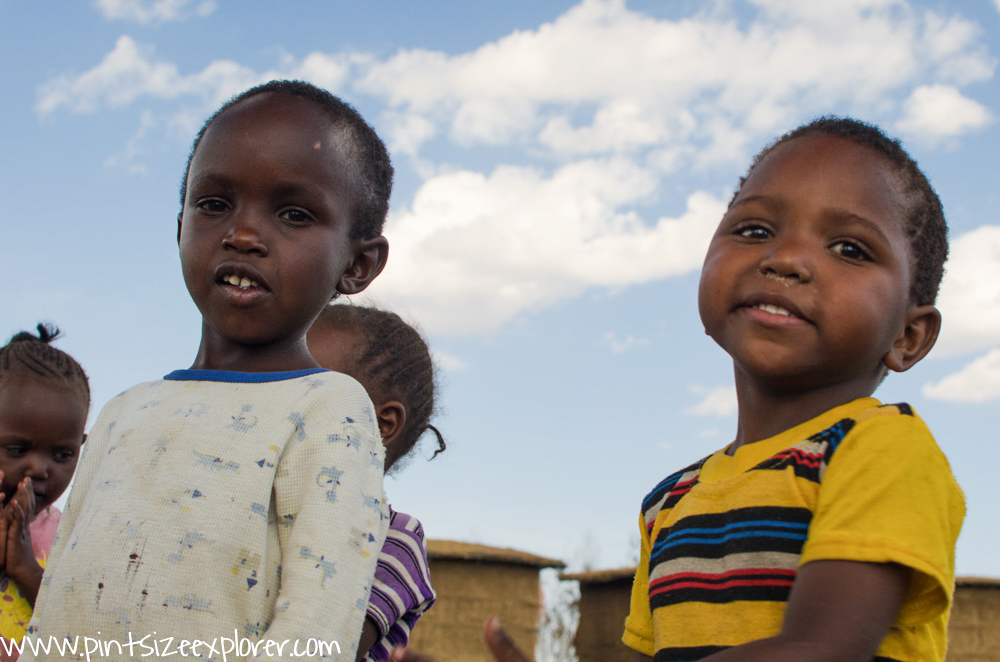 The village was essentially a number of small mud huts made from cow dung with thatched roofs that were encircled by a fence made from branches. They were built around an open space where their livestock would usually be kept, but on this occasion the ladies had set out a display of souvenirs across the a number of blankets for us to look at, and hopefully purchase later on.

Prior to that we were shown into a small hut, and I mean seriously small, which was pretty much pitch black with the exception of a small fire that was lit in one of the two rooms. Our Masai guide ushered us in with the help of the torch on his phone (I know, don’t ask!) and we were prompted to sit down as he chatted away, telling us more about their culture and their way of life. Stumbling into the room and sitting down on the nearest thing to me, I was totally unaware that I almost sat on a small infant who was fast asleep behind me on the bed, but thankfully I didn’t seem to disturb her. 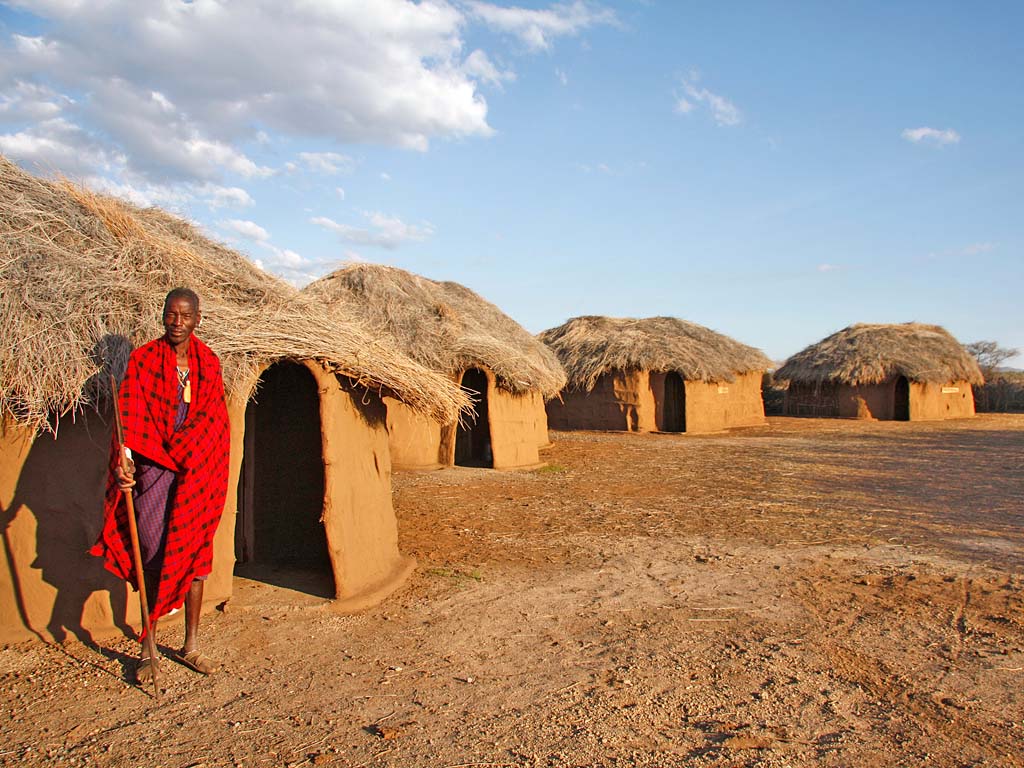 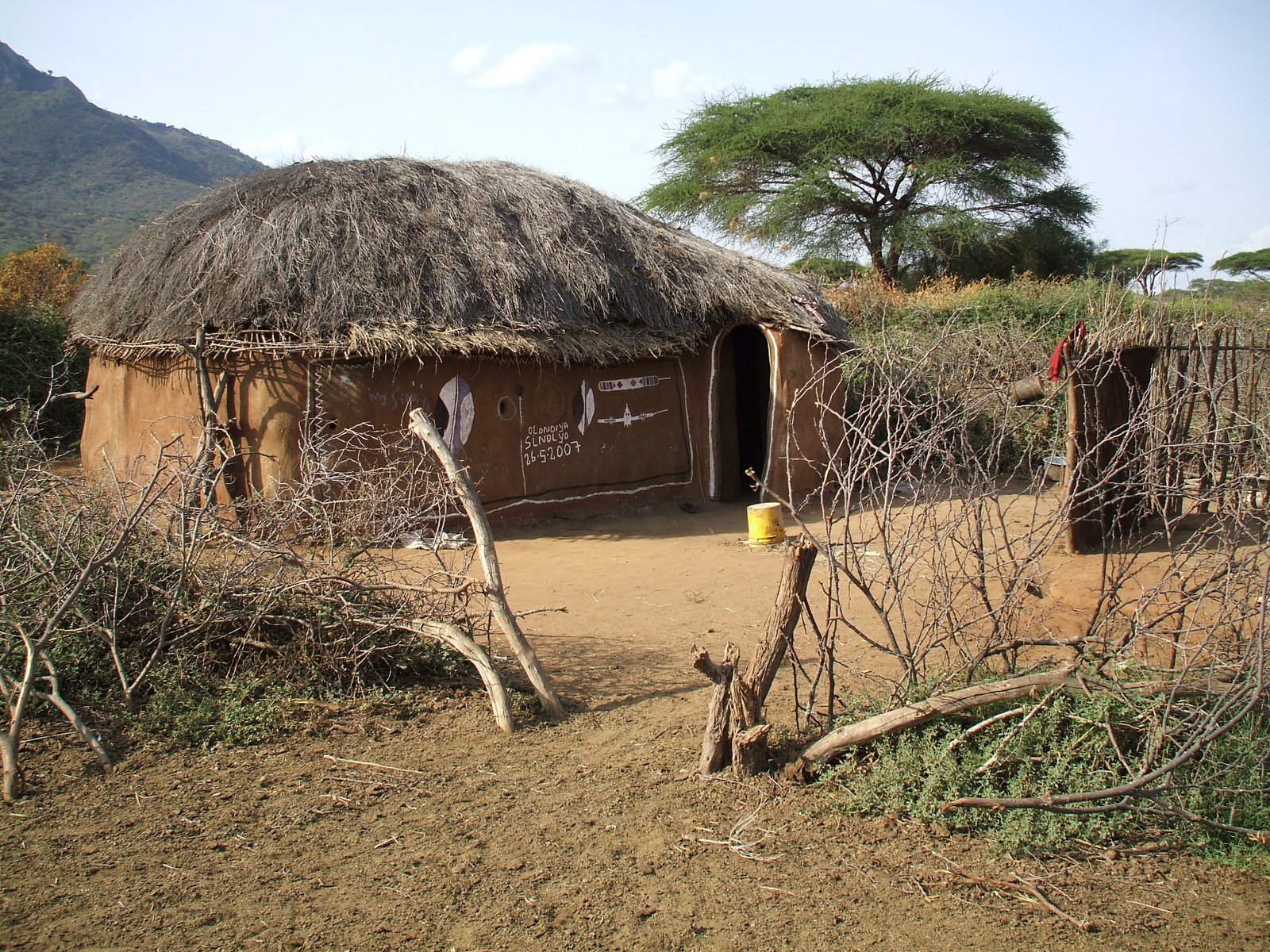 Outside of the hut Alex and Adam were shown how to light a fire with two sticks, before one of them tried to convince Alex to swap his colourful watch in exchange for the sticks. Gemma and I were taken over to the market like souvenir display where a number of jewellery items, wooden carvings and other trinklets were laid out.

Unfortunately the entire experience was really uncomfortable as we were pressured into buying items we didn’t want. Bracelets were put on us (even though I politely protested) and anything you may have slightly glanced at was promptly put in front of you for a further inspection. 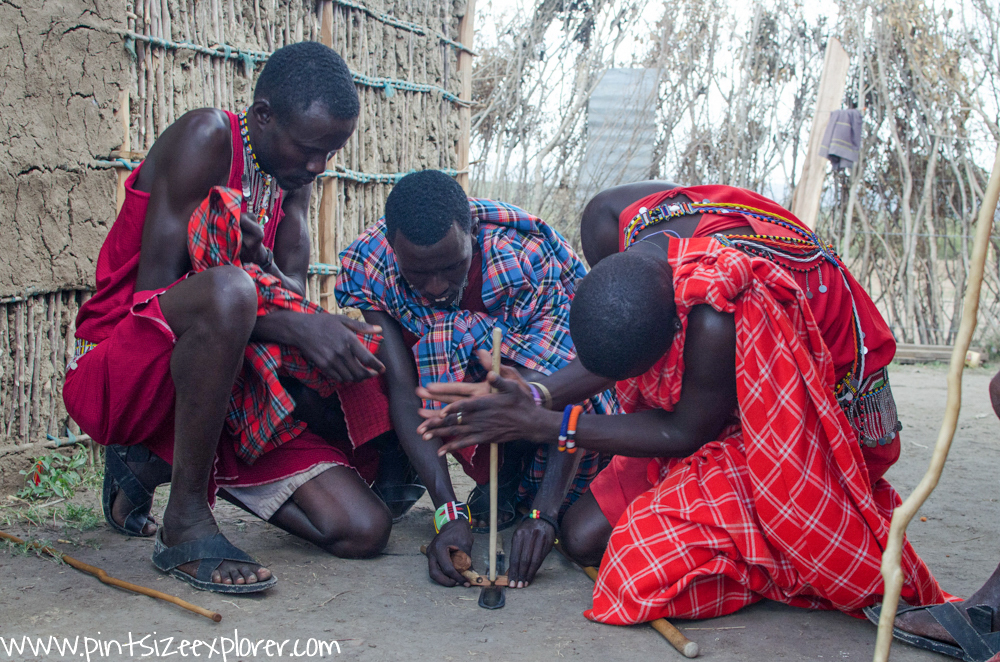 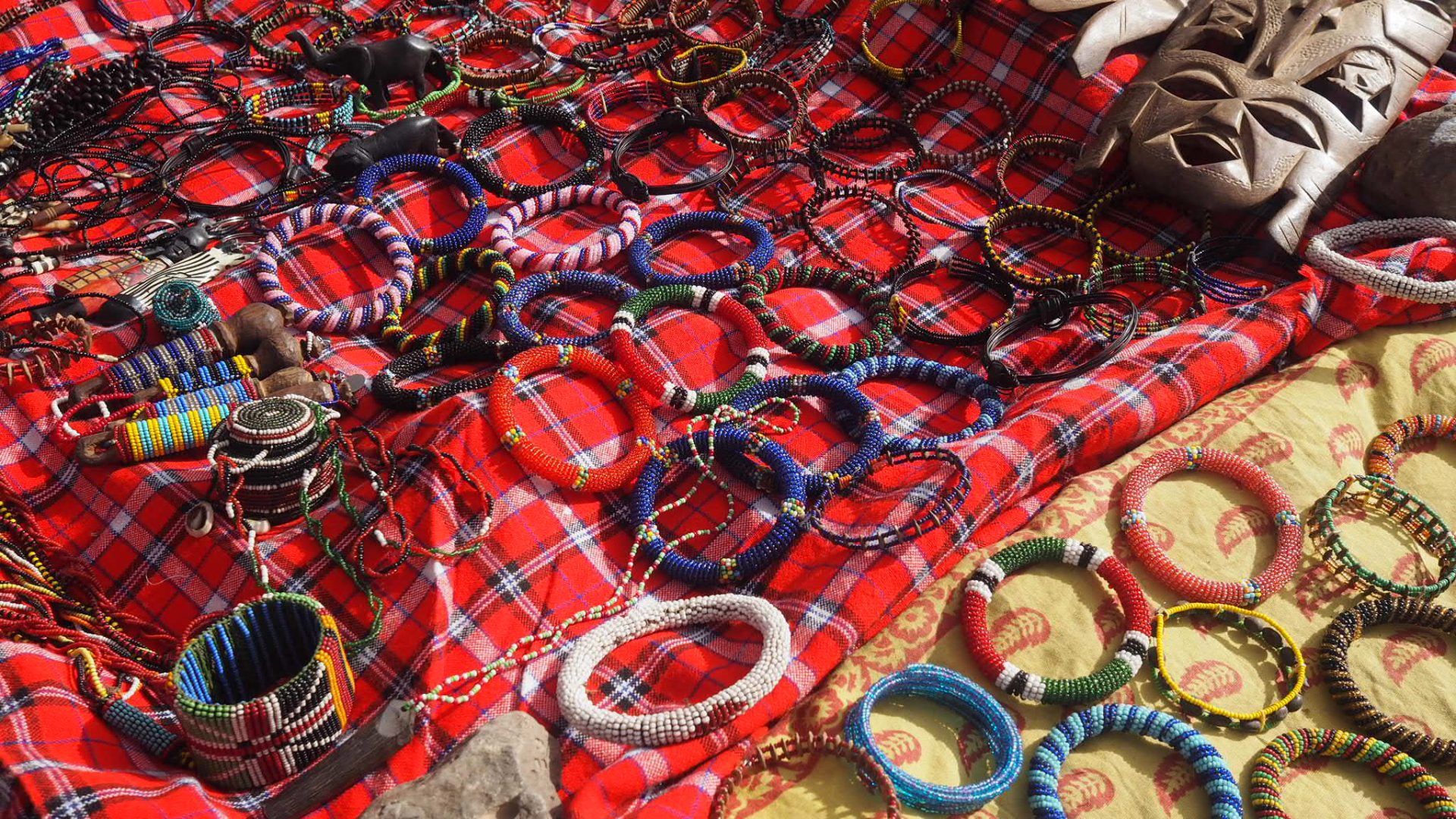 I would usually love to buy my trinklets in a situation like this rather than a large tourist shop on the high street, however everything about this was awkward, rushed and we couldn’t help but feel how staged everything was. The worst part was walking away realising we had handed over nearly $80 for this experience that lasted no longer than 30-minutes – not quite the hour they suggested. 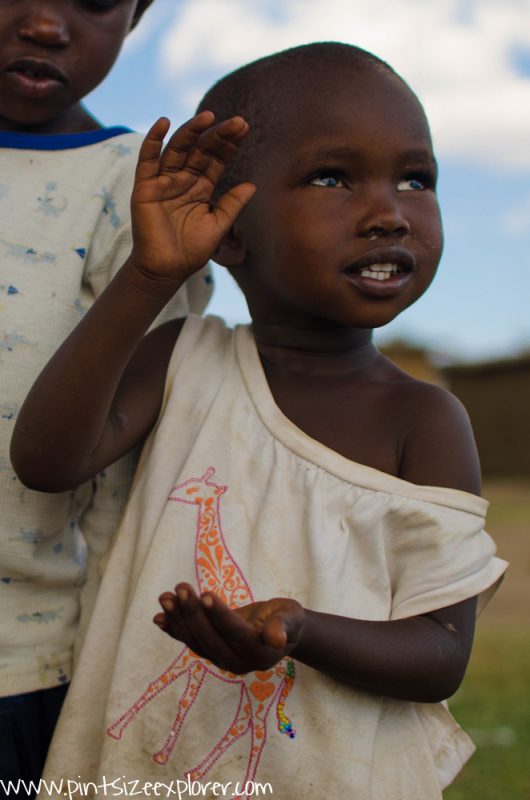 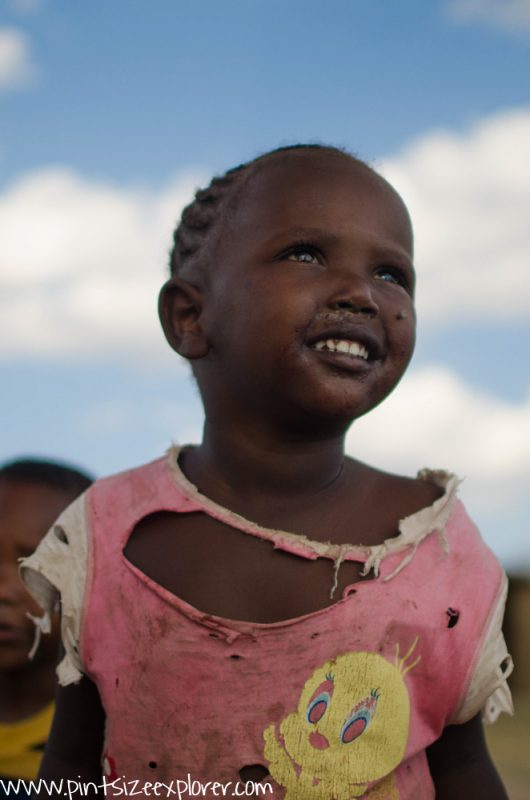 I’ve since read a number of similar reviews which is a real shame as there is so much we can learn from the Masai, but only if the experience can be authentic, without the badgering sales technique of a pushy estate agent.  Make sure you do your homework on the tribes, as I’m confident not all of the Masai villages will be as bad as the one we visited was.